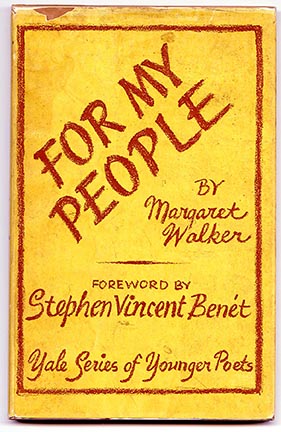 For My People is the collection that put Walker on the map.  Composed of sonnets, ballads, and lyrical portraits, it demonstrates her mastery of form.  More importantly, it established her as a poet of the culture, cadences and legends of the African American culture of the South.  Poet Stephen Vincent Benét appreciated this fact in his forward to the book.  Walker would eventually learn that Benét had to exert great pressure for her to be awarded the Yale Series of Younger Poets award for For My People.  This was no doubt due to her race and gender. The overall tone of For My People is one of cultural and racial affirmation.  At the same time, certain poems bear witness to African Americans’ struggle for survival, and the suffering born of oppression:

Memory
I can remember wind-swept streets of cities
on cold and bluster nights, on rainy days:
heads under shabby felts and parasols
and shoulders hunched against a sharp concern:
seeing hurt bewilderment on poor faces,
smiling a deep and sinister unrest
these brooding people cautiously caress;
hearing ghostly marching on pavement stones
and closing fast around their squares of hate.
I can remember seeing them alone,
at work, and in their tenements at home.
I can remember hearing all they said:
their muttering protests, their whispered oaths,
and all that spells their living in distress.