Cuba’s history of cultural blending influences how Cubans perceive themselves as a people. Cuban anthropologist Fernando Ortiz described this process, called transculturation, in his seminal 1940 essay Los factores humanos de la cubanidad. For Ortiz, cubanidad—Cuba’s unique culture—has its roots in the blending of a population of African, Asian, European, and Indigenous descent. The same year as the Fernando Ortiz essay, the Cuban Constitution stated that all men are equal and that any form of discrimination based on skin color, gender, race, or economic class is illegal and subject to prosecution (Section II, article 10a). Posters in this section address the confluence of diverse cultural practices in the country and the historic struggles for equal rights for all Cubans 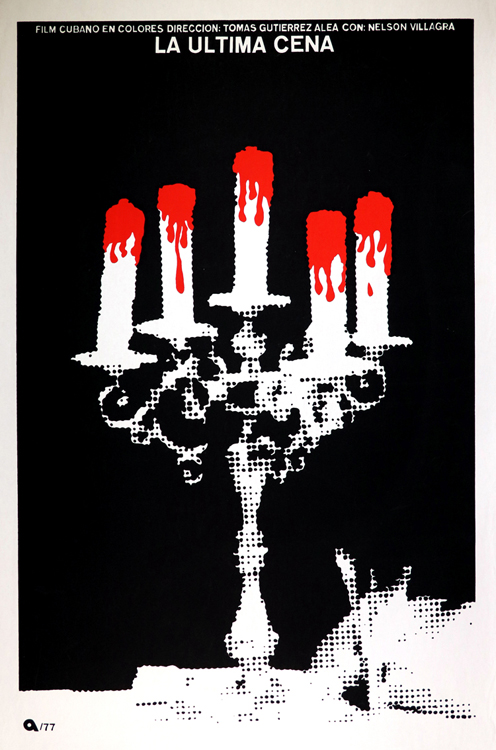 Here, renowned poster designer, René Azcuy, chose the candelabrum as an emblem for the film since two such elaborate candle holders are prominent light sources in a prolonged banquet scene. The wax that drips from the candles in the movie has been stained red in the poster to symbolize the violence in the film. Azcuy began using black with a limited amount of red ink in posters he made in the late 1960s.

In The Last Supper, a sugar plantation owner serves a sumptuous meal to twelve enslaved men. Seeing himself as Jesus surrounded by his disciples, the man promises the men a day of rest. The day after, on Good Friday, the enslaved men are made to work by an overseer who denies they were told they would have a day of rest. The enslaved men escape, but are tracked down and murdered. The film, set in Cuba in the Spanish colonial period of the late eighteenth century, exposes religious hypocrisies used by the ruling class to justify slavery. The director also uses the film to explore white people’s guilt for racism and slavery. 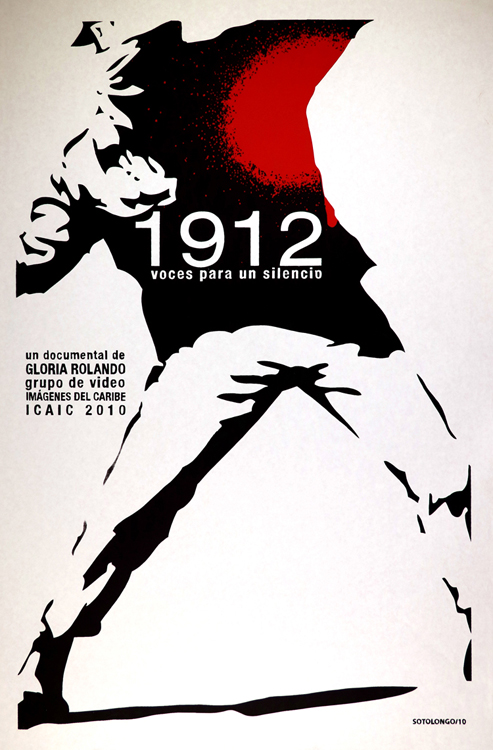 In this poster, designer Claudio Sotolongo uses spare black outlining and silhouette against an unarticulated flat white background, along with a suggestive accent of a red splatter pattern to create a powerful, dynamic figure. The figure might be seen as falling backwards, or caught in the act of throwing something. And, the figure is cropped at the face and at the extremities of hands and feet, adding to a sense of ambiguity and imparting an anonymous or an everyman aspect to the person depicted.

This is a design for the documentary 1912 voces para un silencio (1912: Breaking the Silence), which chronicles the history of Afro-Cubans and the Partido de los Independientes de Color (Independent Party of Color, or PIC) – the first black political party in the western hemisphere outside of Haiti. Evaristo Estenoz, Pedro Ivonnet, Gregorio Surín, and other supporters founded the PIC in Havana on August 7, 1908. The Cuban army killed all of the founders along with many thousands of Afro-Cubans in a massacre that occurred in 1912. Director Gloria Rolando organized the documentary into three chapters and made use of historic images, documents, photographs, press clippings, and other source material. 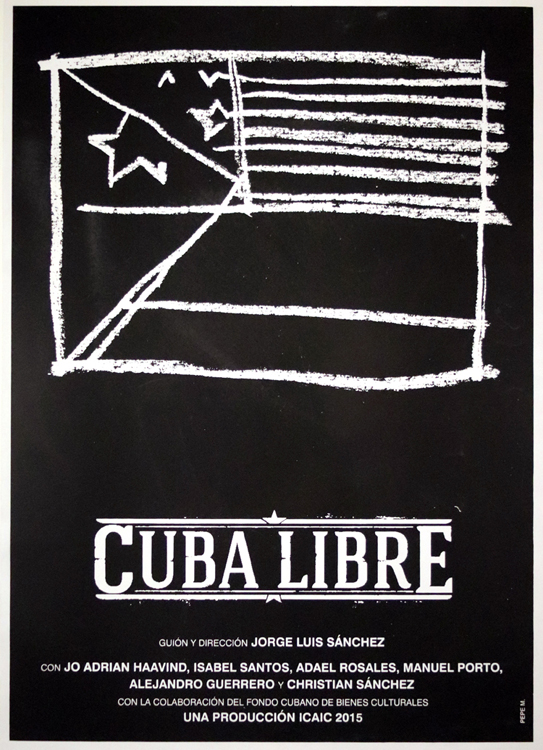 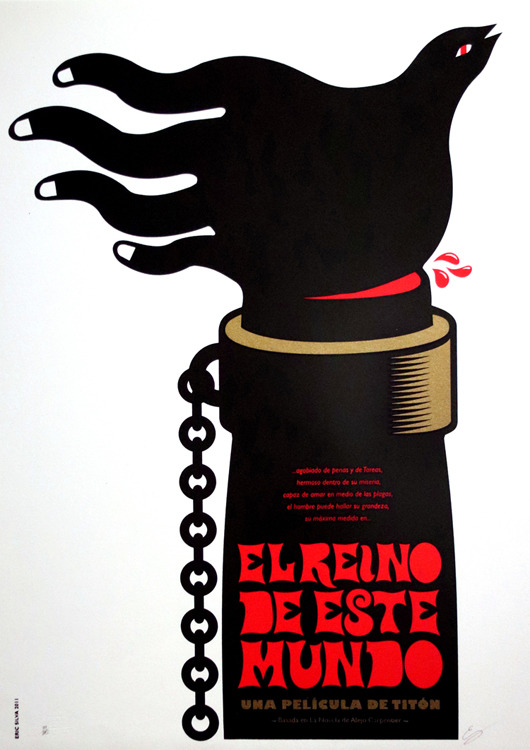 Eric Silva made this poster for an exhibition about unrealized films by famed director Tomás Gutierrez Alea. The shackled black arm with a hand in the form of a stylized bird refers to the fantastical transformation of an injured, enslaved man in El reino de este mundo (The Kingdom of This World). A novel by Alejo Carpenter, The Kingdom of this World is about the Afro-Caribbean enslaved population in Haiti who fights against the French colonizers in 1791 only to then see a new government of oppressors enslave their own people. Published in 1949, the novel was an early example of magic realism, a genre that incorporates the supernatural and surreal into everyday life.

“…overwhelmed by sorrows and work,
beautiful in spite of his misery,
able to love in the face of despair,
man can discover his glory,
his highest peak…
In the reign of this world” 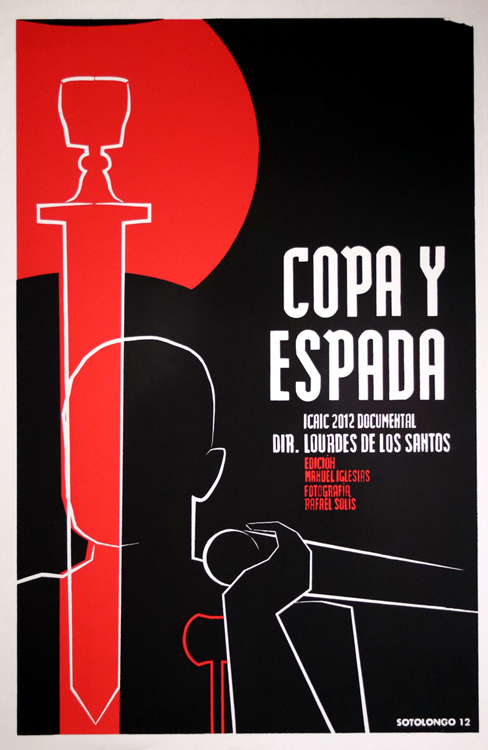 The documentary Copa y espada is dedicated to the celebration
of Santa Bárbara, which takes place every December 4 in the city of Güines. The documentary illustrates the blending of religious traditions in Cuba (a process called syncretism). Although enslaved Africans who arrived in Cuba were forced to adopt Christianity, many people maintained aspects of their religious beliefs by merging them with Catholicism. In Cuba’s syncretism, the Orisha Shango from the Santería religion is syncretized with the Catholic saint Santa Bárbara. The film highlights the blending of religious traditions by documenting how figures from different religions are celebrated on the same day and share visual attributes. 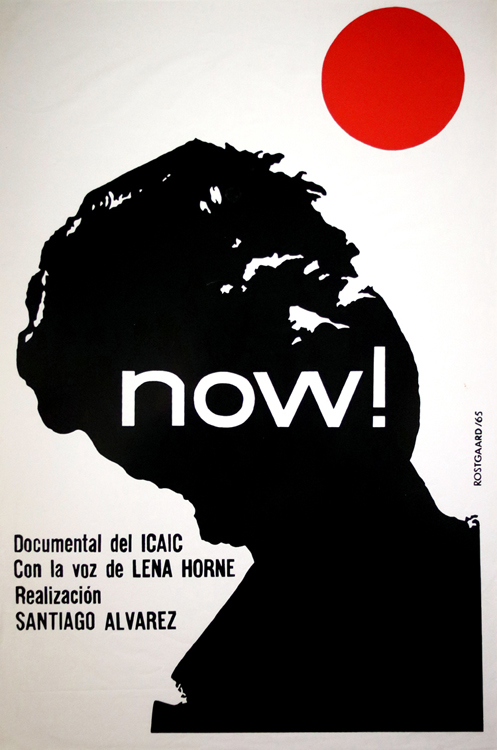 Acclaimed documentary filmmaker Santiago Alvarez may have been referring to his short film Now! when he stated, “give me two photos, music, and a moviola, and I’ll give you a movie.” Set to American singer Lena Horne’s protest song of the same title, the film utilizes newsreel and still footage to produce a searing indictment of the violence against African Americans that occurred during the Civil Rights movement.

Rostgaard’s poster emphasizes the urgency that characterizes
both the film and the song. In Cuba, the Constitution of 1940 acknowledged racial equality. By placing the title across the mouth of the overexposed black figure, Rostgaard conveys the song’s insistence that the time for racial equality in the United States is now. 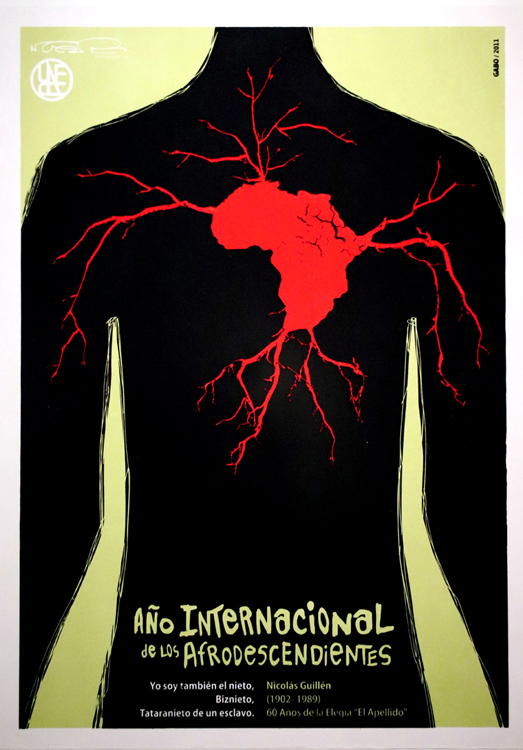 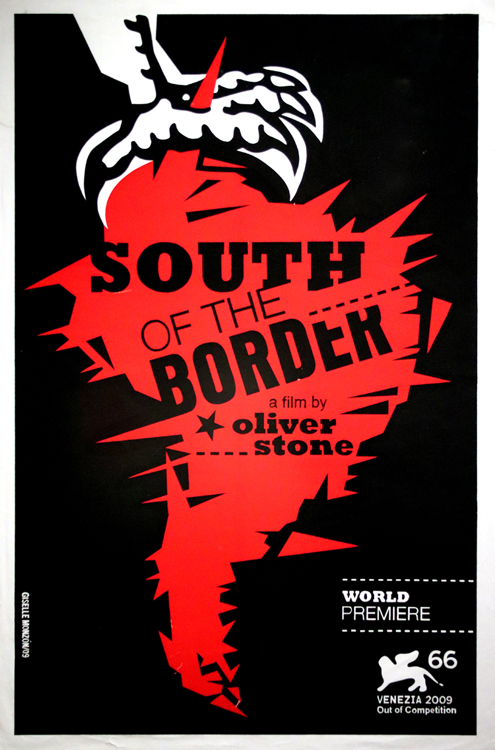