The Butterfly in London

Whistler moved to London in 1859. His views of the Thames, depictions of London gardens and neighborhoods, and portraits of London characters are among Whistler’s most famous subjects. In London he formed new relationships, including with artists of the Pre-Raphaelite circle and literary figures including Algernon Swinburne and Oscar Wilde. His home was a social hub, host to dinner parties and Sunday breakfasts featuring American pancakes. London was the site of one of the most important galleries associated with Whistler, the Grosvenor Gallery, which helped promote the Aesthetic Movement. And, London saw two of Whistler’s most notorious controversies, his dispute with patron Frederick Leyland over the Peacock Room, and, shortly thereafter, the trial in which Whistler sued art historian John Ruskin for libel.

While controversial, he also received accolades. By 1886 he was elected President of the Society of British Artists, at the time a sleepy alternative to the Royal Academy, but due to conflicts with members, he was forced to resign by 1888. While he continued to live primarily in England, by the end of his life his thoughts on the British art world had soured. In his will he instructed his executrix that regarding works remaining in his studio “none of them should ever find a place in an English Gallery.” 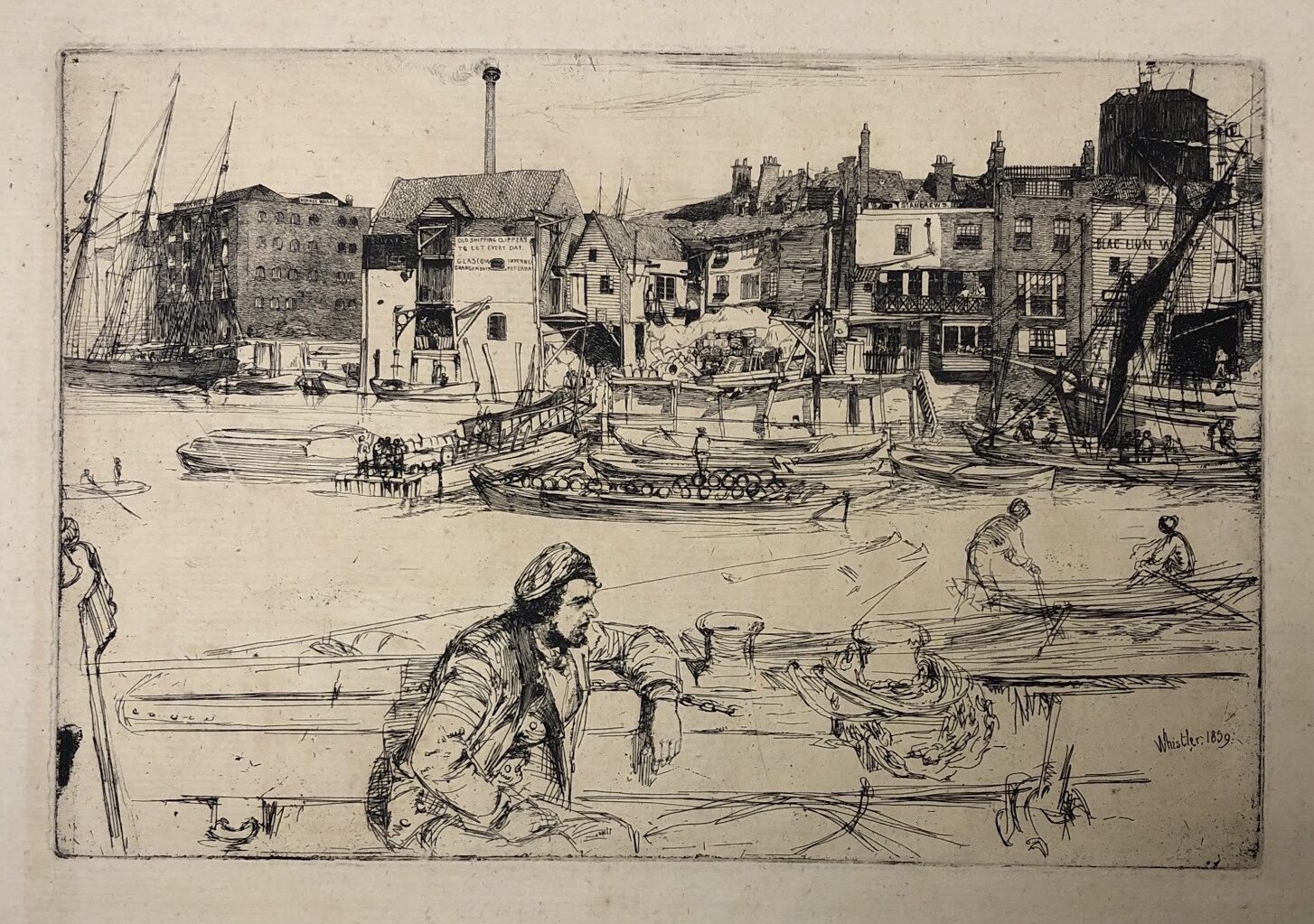 When Whistler arrived in London in 1859, he chose to live in Wapping, a working-class district on the Thames. He wanted to understand life on the river. Wapping was filled with wharves, taverns, boarding houses, fishmongers, dock workers, and all manner of labor associated with the river.

The detailed line-work seen here was characteristic of Whistler’s early etching style. The worker in a barge in the immediate foreground is a compositional device that arrests the viewer’s eye before proceeding to the far shore and a ramshackle collection of buildings. The title of the print comes from a sign on a building at upper right, reading “Blac Lion Wharf” (with no “K”).

This print was published much later, in 1871 as part of the Series of Sixteen Etchings of Scenes on the Thames, commonly called the “Thames Set.” 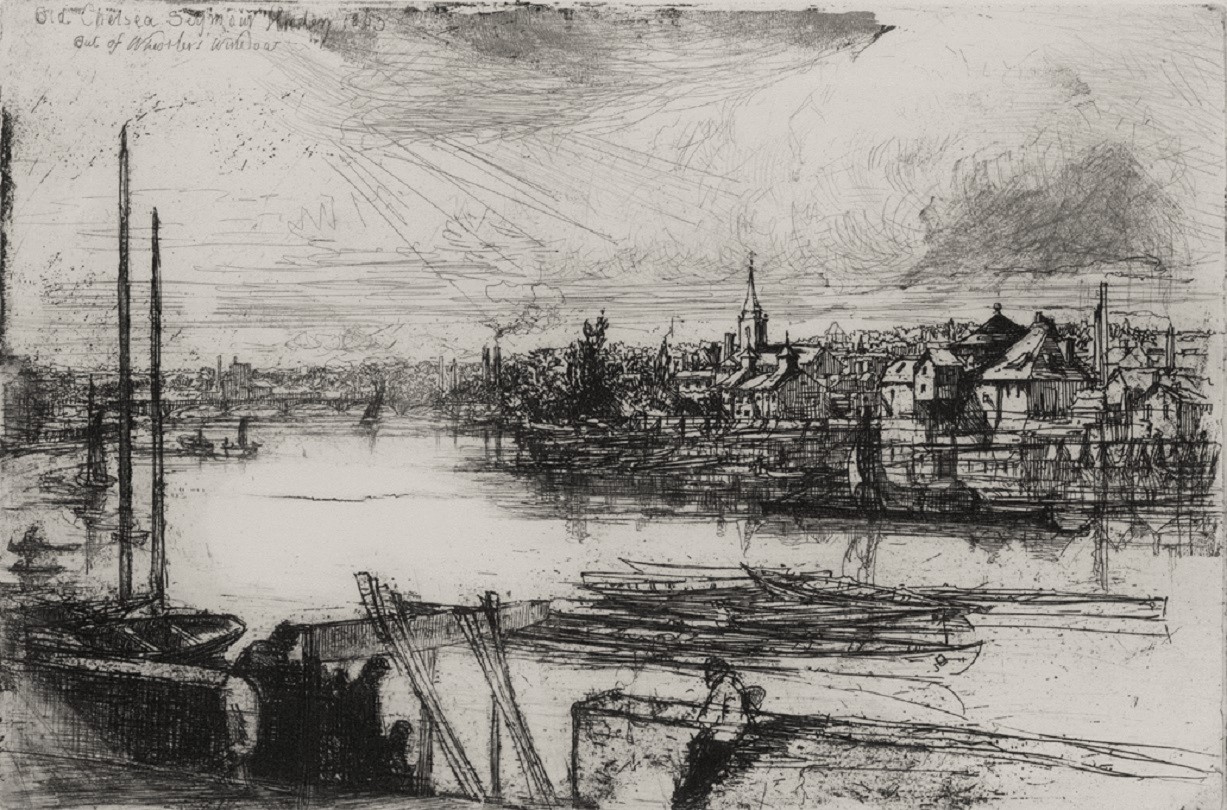 Francis Seymour Haden made this sweeping view of the Thames from his brother-in-law Whistler’s window at 7 Lindsay Row in Chelsea. There, Whistler was ensconced in a cultural neighborhood that included Dante Gabriel Rossetti (and for a time his housemates, the poet Algernon Swinburne and the novelist George Meredith), Walter Greaves and his brother Henry, among others. 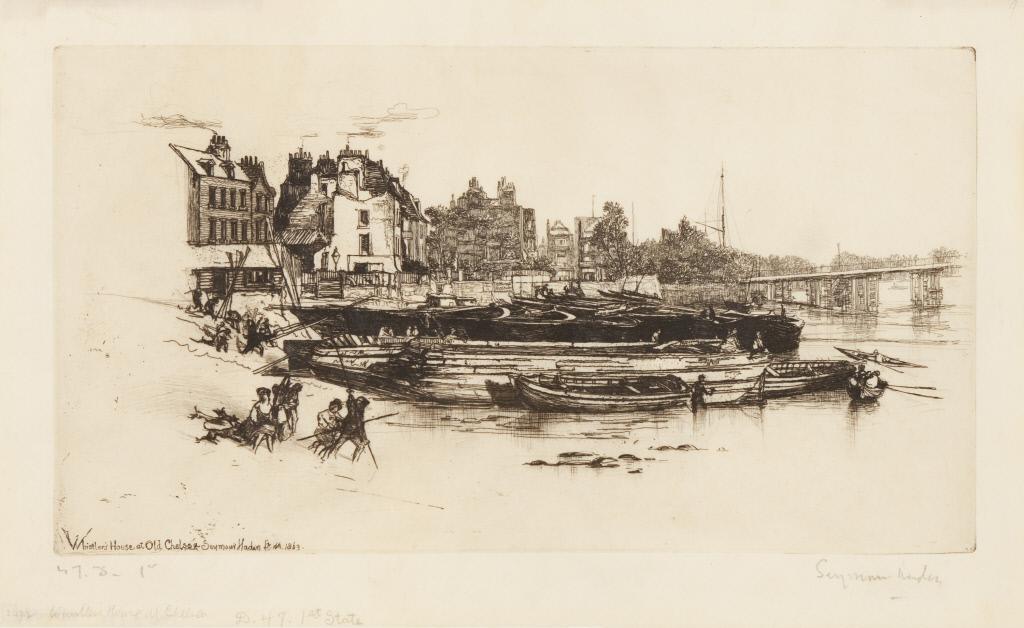 This etching is something of a reversal of the view of the Thames from Whistler’s window produced by Francis Seymour Haden (nearby). Here, Haden depicts Whistler’s house in the Chelsea neighborhood of London at 7 Lindsay Row. Whistler moved there in 1863, the year this print was produced. 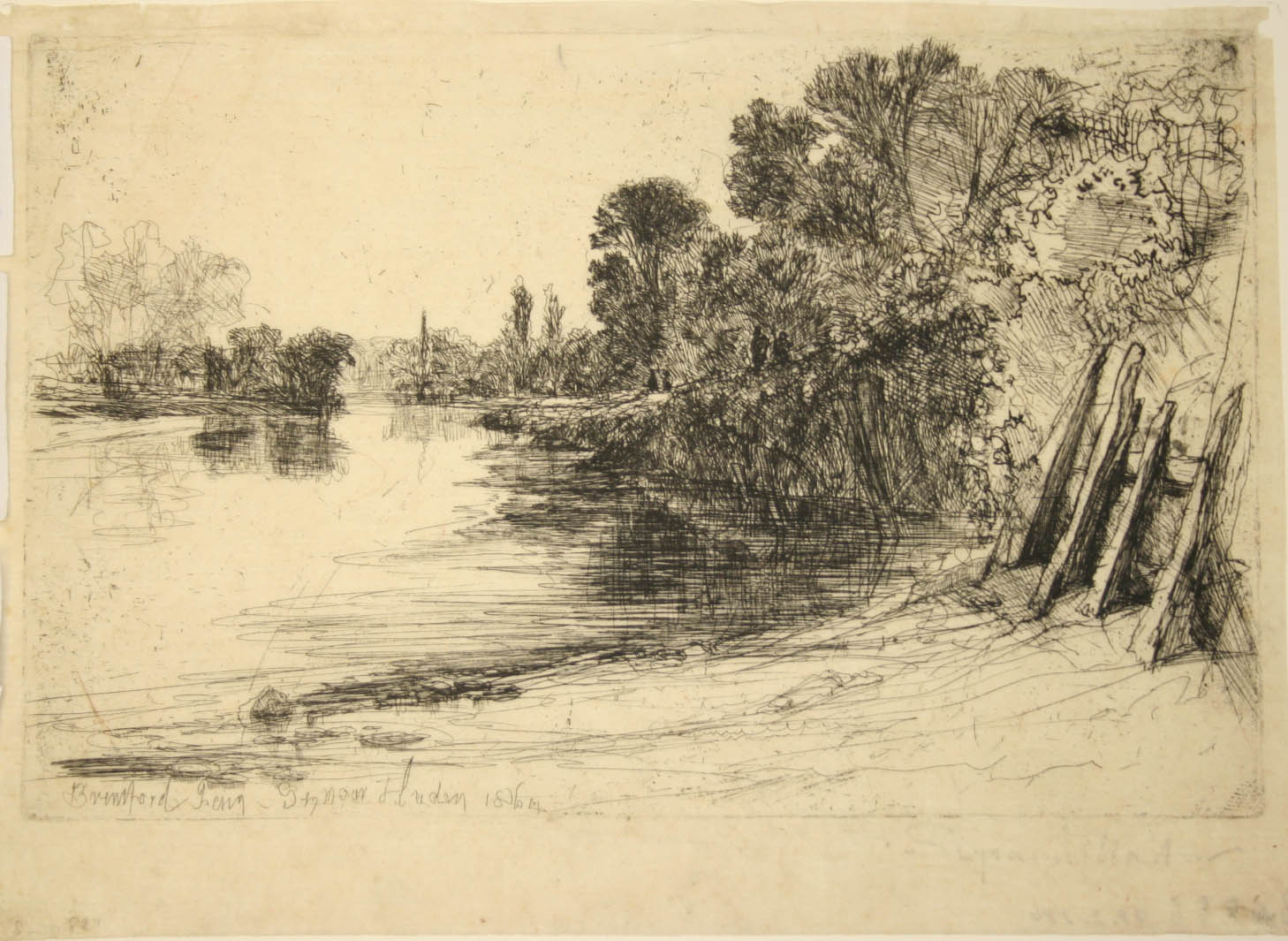 Francis Seymour Haden, like his brother-in-law Whistler, frequently turned to the Thames as a source of inspiration. Here, Haden evokes a serene sense of the river. Yet, this was a highly traveled commuter spot. He is depicting the landing area for the ferry that conveyed travelers between Brentford and Kew. 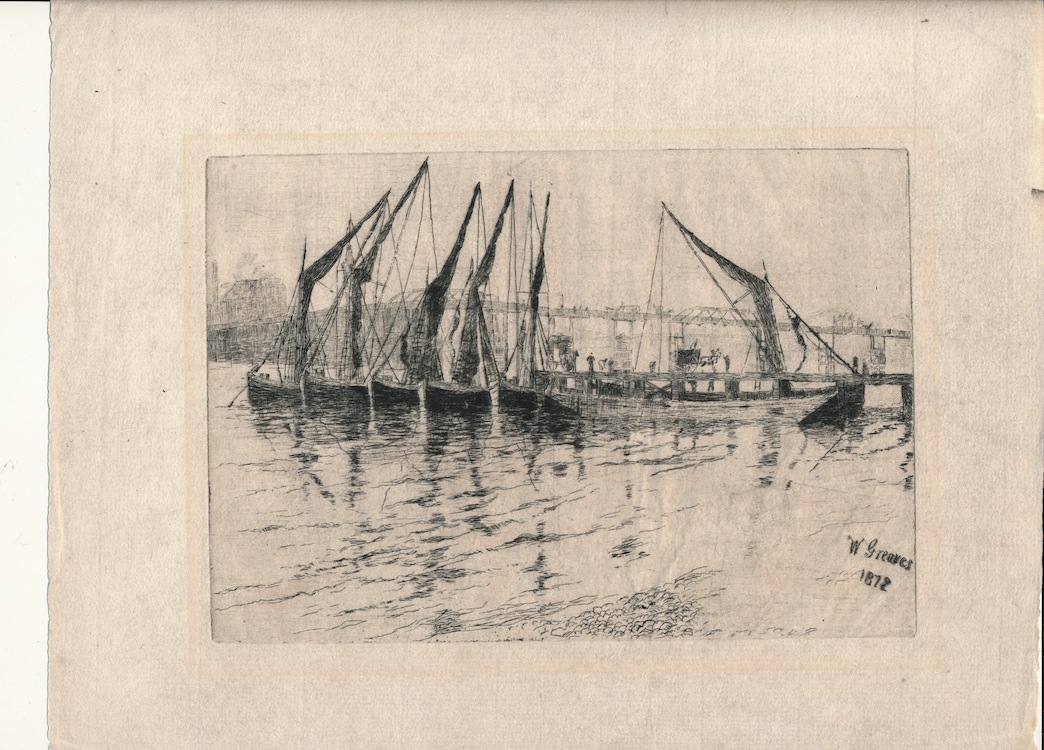 Walter Greaves and his brother Henry were among Whistler’s earliest devotees and assistants. They were the sons of a boatman who made his living on the Thames. Walter Greaves spent a great deal of time rowing with Whistler on the river as he observed life on the Thames and the river’s atmosphere. The Thames was one of the subjects for which Whistler was best known.

This etching depicts two subjects greatly familiar to Whistler, Lindsey Wharf in the Chelsea neighborhood of London where Whistler lived for many years, and Battersea Bridge in the distance, which Whistler depicted in his own art. 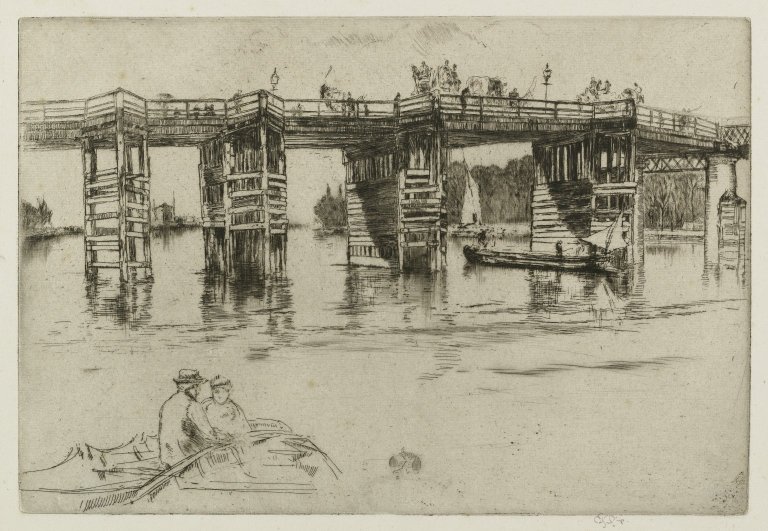 Bridges over the Thames in London were some of Whistler’s favorite subjects in painting and works on paper. The bridge, which connects the districts of Fulham on the north bank and Putney on the south bank, in this print was also the subject of a watercolor. Some of his views of bridges over the river were soft, atmospheric and moody, evoking London fog. Others, as with this example, emphasize detailed line work and convey a sense of the life and work that occurred on and around the Thames.

Bridge motifs are also found in his works from Amsterdam and Venice. 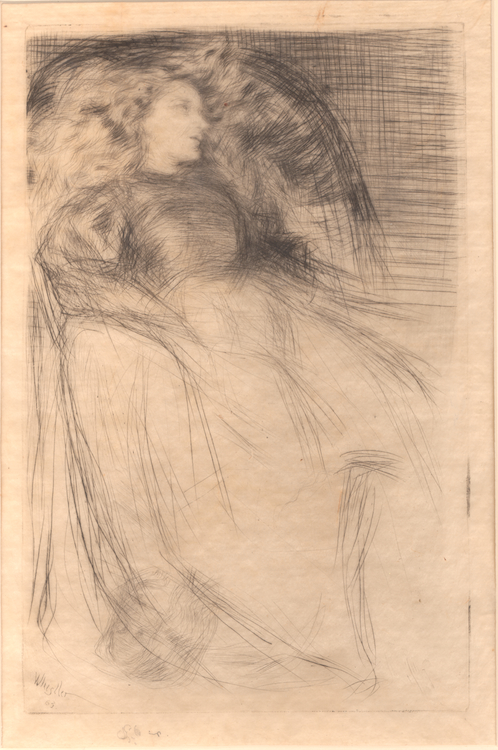 This is one of Whistler’s most celebrated etchings, depicting one of his most recognizable models, Joanna Hiffernan. She featured in major paintings including Symphony in White, No. 1: The White Girl, 1863, and Symphony in White, No. 2: The Little White Girl, 1864 (a period photograph of this painting, on view nearby). Hiffernan lived with Whistler in the 1860s, handling much of his business affairs. Her relaxed, informal pose suggests the intimacy between artist and model. Whistler’s concentration of detail around her shoulders and face highlights her most remarkable feature—her bountiful red hair. The lounging posture evokes a Pre-Raphaelite sensibility and at the time Whistler was close with Dante Gabriel Rossetti, his neighbor in Chelsea. Whistler’s composition can be seen in conversation with more than one of Rossetti’s works. 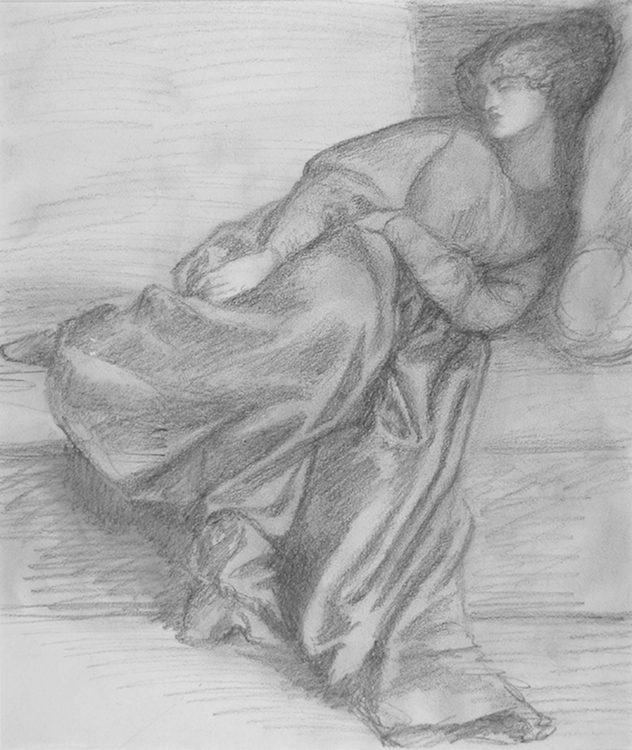 Dante Gabriel Rossetti’s drawing of Jane Morris recalls the mood of Whistler’s earlier, famous drypoint, Weary (nearby). The two artists were friends and had a mutual impact on each other’s work. The drawing is also an example of the type of art for which Dante Gabriel Rossetti was best-known, depictions of beautiful women in both literary subjects and modern domestic scenes.

Jane Morris was the wife of William Morris, the renowned designer, writer, and activist associated with the Arts and Crafts Movement. A talented craftsperson herself, she became Rossetti’s principal model and muse in the 1860s and the couple had a love affair. This drawing belonged to the artist’s brother, William Michael Rossetti, an important art critic and supporter of Whistler. William Rossetti testified on Whistler’s behalf in the 1878 trial between Whistler and Ruskin. 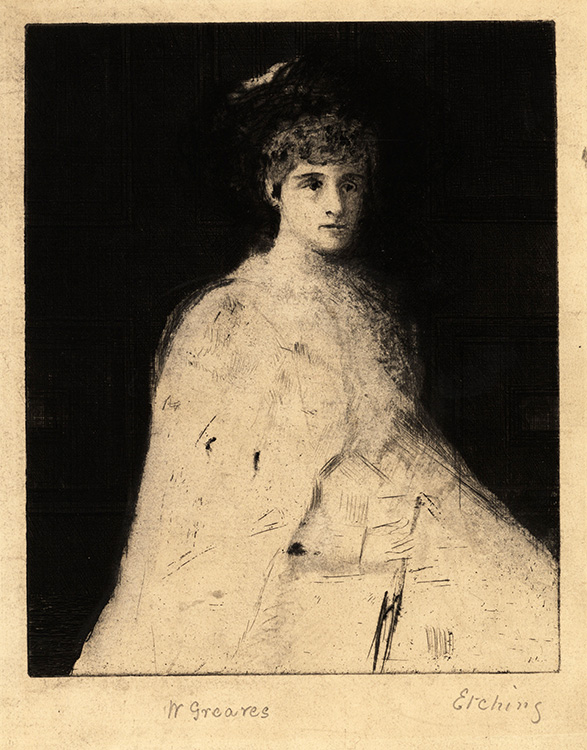 This uniquely retouched print is by one of Whistler’s earliest followers, Walter Greaves. It is a delicate depiction of his sister, Alice Greaves, who was also occasionally a model for Whistler. Significantly, the Greaves family introduced Whistler to the Cremorne Gardens in London. Alice was known to accompany Whistler to the decadent pleasure gardens known for entertainments of all variety, including fireworks displays. These fireworks provided the subject matter for one of Whistler’s most notorious, and nearly abstract paintings, Nocturne in Black and Gold: The Falling Rocket, 1875. 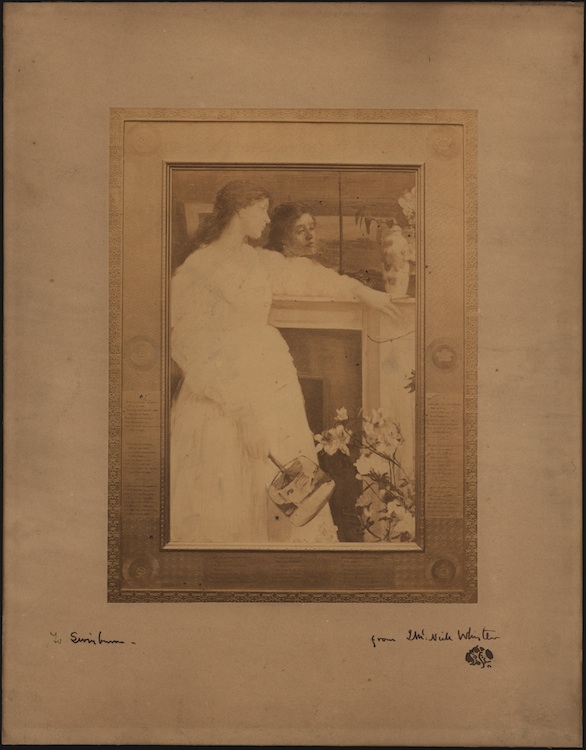 Whistler’s major painting, originally titled The Little White Girl, completed in 1864, portrays Joanna Hiffernan, (the same model for the etching Weary, nearby) standing in front of the fireplace in the drawing room of Whistler’s house in Lindsey Row. The pose and the accessories—porcelain and a Japanese export market fan—show the artist’s increasing interest in Asian art. The painting inspired Algernon Swinburne to write a poem “Before the Mirror.” This photograph shows it as originally exhibited at the Royal Academy, in a special frame—now lost—with the “verses under a picture” printed on gold paper. The ﬁnal text appeared in Swinburne’s Poems and Ballads, 1866. 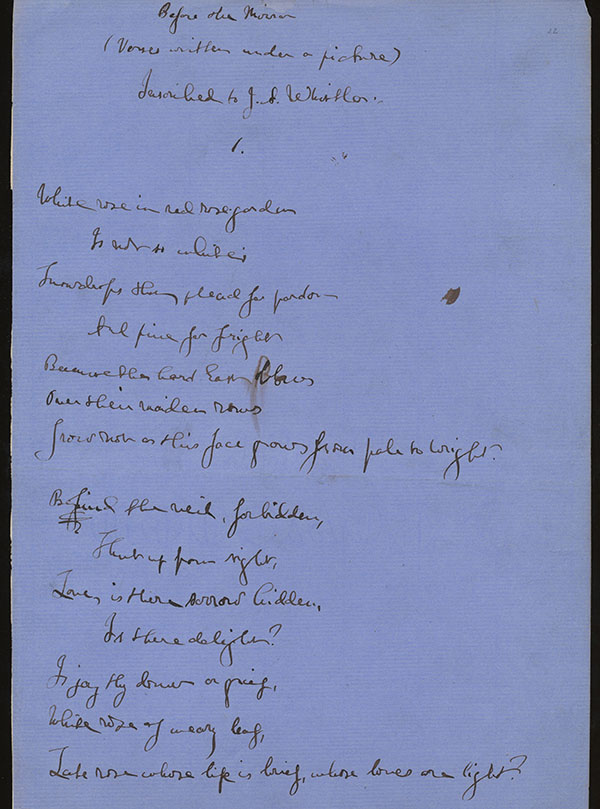 This is one of several surviving manuscripts of the poem Algernon Swinburne wrote upon seeing Whistler’s painting Symphony in White, No. 2: The Little White Girl, 1864, in which he added the dedication to Whistler. Swinburne sent an earlier draft to John Ruskin, hoping to interest him in Whistler’s work—without success. Long after their friendship ended, Whistler was still able to praise Swinburne’s poetic tribute, calling it in 1900, “a rare and graceful tribute from the poet to the painter - a noble recognition of a work by the production of a nobler one.” 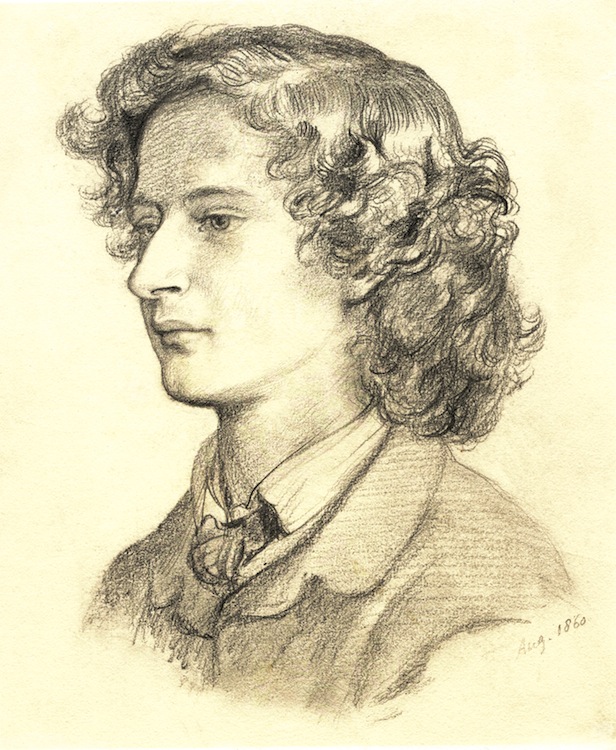 Here, Dante Gabriel Rossetti sensitively depicts young lyric poet Algernon Swinburne, who was often associated with Pre-Raphaelite circles. Swinburne even lived for a time in Rossetti’s house, 16 Cheyne Walk in Chelsea, only a few minutes from Whistler’s house. Rossetti, Whistler and Swinburne were constantly in each other’s company in the 1860s.

The relationship between Swinburne and Whistler dissolved in the mid-1880s over Swinburne’s negative review of Whistler’s “Ten O’Clock” lecture. By this time, Swinburne, once notorious for his sexually-charged verse, radical politics, and alcoholism, had become a respectable resident of a London suburb, Whistler referring to him as “outsider - Putney” who was not qualified to speak about art. 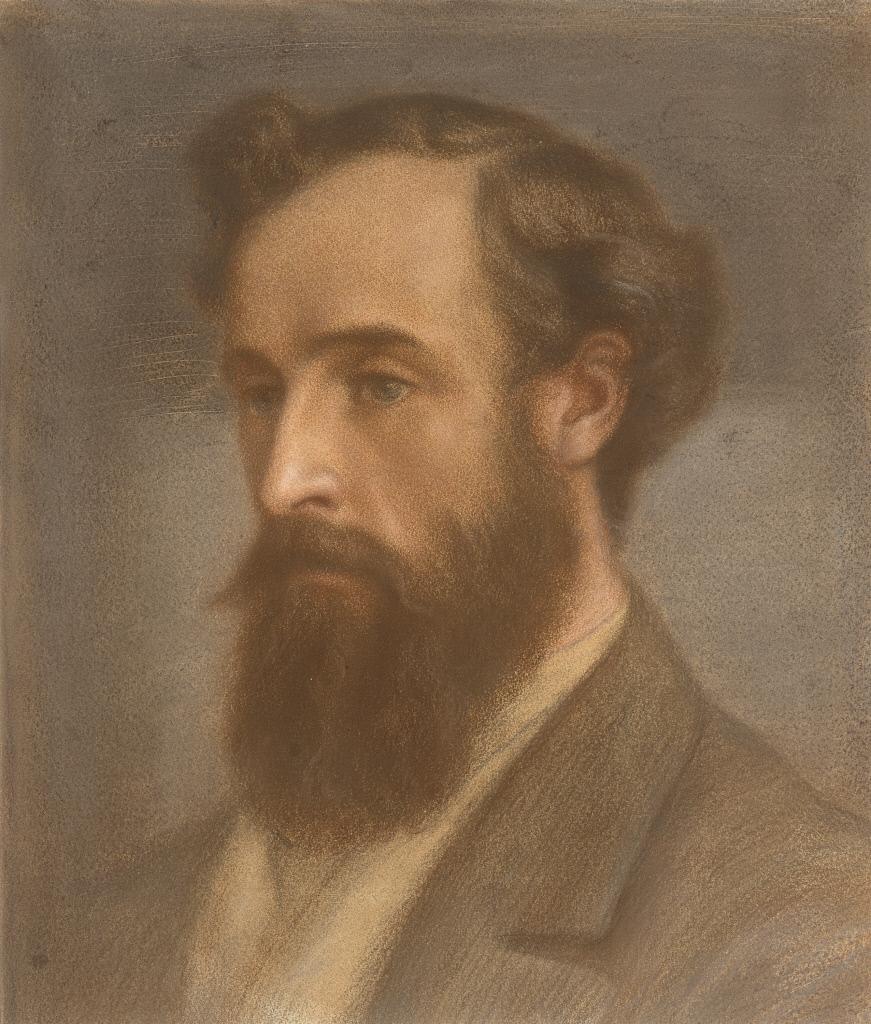 A self-made shipping magnate, Frederick Leyland was also a major art patron. By the early 1870s he assembled a remarkable collection of Italian Renaissance art and paintings by Pre-Raphaelite artists, including Dante Gabriel Rossetti, who depicted him in this sensitive portrait. Whistler, too, came into Leyland’s orbit and they developed a close association. Leyland commissioned Whistler to make portraits of his family and he purchased the artist’s painting The Princess from the Land of Porcelain.

Two major scandals would fracture the relationship. One involved rumors of an affair between Whistler and Frances Leyland, Frederick’s wife and Whistler’s friend and model. The other involved Whistler’s elaborate—and largely unsolicited—additions to the dining room in Leyland’s London home, known as the Peacock Room. 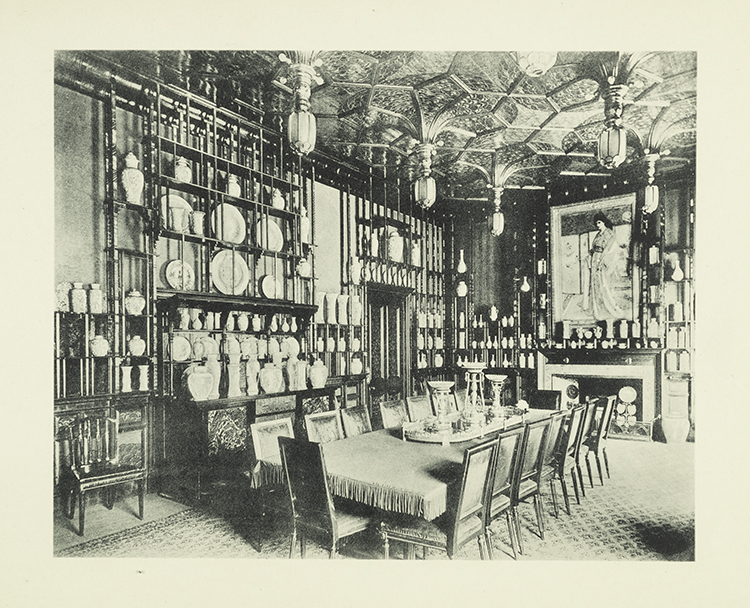 In 1876, Frederick Leyland asked Whistler to complete the dining room quickly at his London house when original decorator, Thomas Jeckyll left the project. Instead, Whistler made elaborate interventions for nearly two years, covering the Spanish leather and walnut paneling with blue-green paint and gold gilding, complementing his own painting, The Princess from the Land of Porcelain above the fireplace. When Leyland paid half of what Whistler asked for the unauthorized work, Whistler added a final element: a twelve-foot mural of two fighting peacocks representing artist and patron. The stunning Aesthetic interior became known as the Peacock Room.

This booklet promoted the sale of the Peacock Room when it was dismantled after Leyland’s death. The photographs document Whistler’s decorations and open shelving designed to display Leyland’s collection of ceramics. Charles Lang Freer purchased and moved the room to his home in Detroit. It was later relocated to the Freer Gallery of Art in Washington, DC, where it remains today. 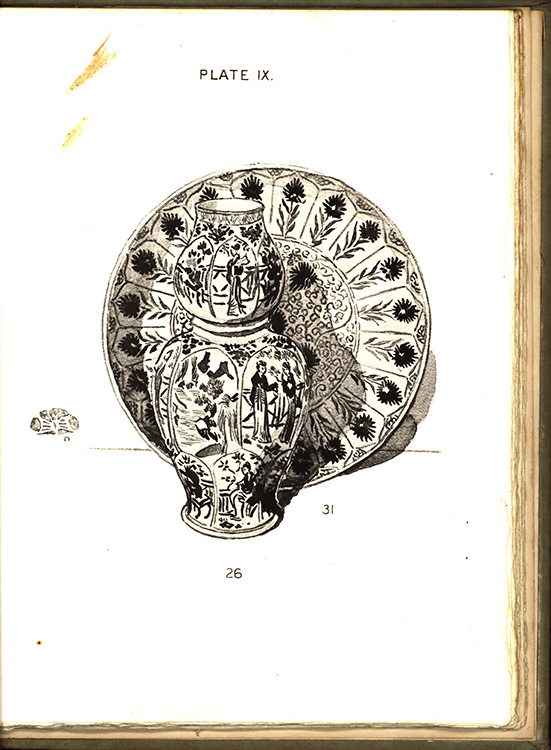 In the 1860s and 1870s, Chinese porcelain and British porcelain modeled on Chinese designs were fashionable among artists and collectors in London. Whistler, Frederick Leyland, and Dante Gabriel Rossetti had collections. Blue and white porcelain became an important feature in Aesthetic Movement interiors, meant to infuse beauty into every aspect of life. Collecting was highly competitive—there are even reports of collectors stealing pieces from one another. This elaborate privately printed book catalogues ceramics owned by Henry Thompson, a rich physician and amateur painter and friend to Whistler in the 1870s. Whistler made sixteen full-page illustrations for this book, as well as a cover design in the style of a Japanese lacquer box.

The catalogue was limited to only 220 copies circulated privately among a select milieu. This copy is inscribed by Thompson to a well-known authority on Chinese porcelain, Stephen Wootton Bushell. 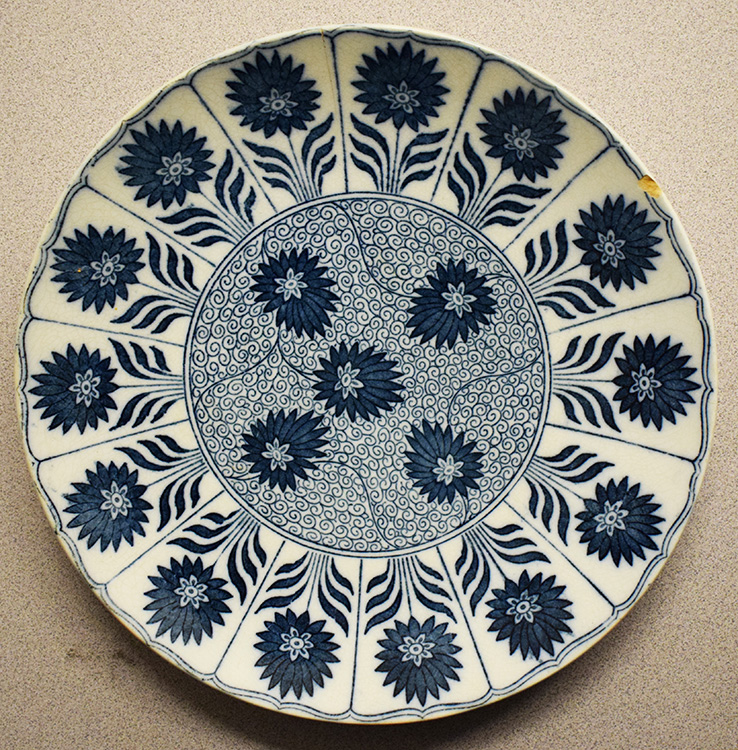 This plate is an example of a late nineteenth-century form made by Minton and Company, which had been originally founded in 1793 by Thomas Minton. The design was derived from Chinese export porcelain, which had become popular in England. Both Whistler and his patron Frederick Leyland were known for their love of blue and white porcelain. The Peacock Room in Leyland’s London home was filled with open shelving to display his extensive collection of porcelain.