The Butterfly’s Family and Background

Before James Abbott Whistler added “McNeill” to his name and later abandoned “Abbott,” and before he adopted the image of a butterfly with a stinging tail as his signature, his American family nicknamed him Jemie.

In 1834, he was born in Lowell, Massachusetts to Major George Washington Whistler and his second wife, Anna Matilda McNeill Whistler. The artist was the first of his parents’ five children and he had three older half-siblings from his father’s first marriage. His father was a graduate of West Point and an esteemed civil engineer. In 1842, George Whistler was commissioned to build a railroad from St. Petersburg to Moscow, relocating the family to Russia for six years. During his cosmopolitan upbringing, Whistler also spent significant time in London with his half-sister Deborah and her husband, Francis Seymour Haden, a surgeon and etcher.

Whistler followed in his father’s footsteps, entering West Point in 1851. There he received artistic training, but failed to graduate, earning a lackluster record and a rebellious reputation. Later, Whistler worked briefly for the government in Washington, DC, producing etchings in the form of maps and topographical studies.

In 1855, at age twenty-two, he moved to Europe to become an artist. While he retained his American citizenship, he never returned to the United States. 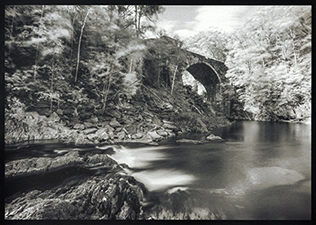 This recent photograph reflects the long legacy of Whistler and his father, engineer George Whistler. Whistler’s Arch depicts a stone railroad bridge in the Berkshire Mountains. George Whistler designed it around 1840, when he was the chief engineer for the Western Railroad of Massachusetts. Two years later, he received a commission from Czar Nicholas I to build a railroad in Russia and relocated the family to St. Petersburg. 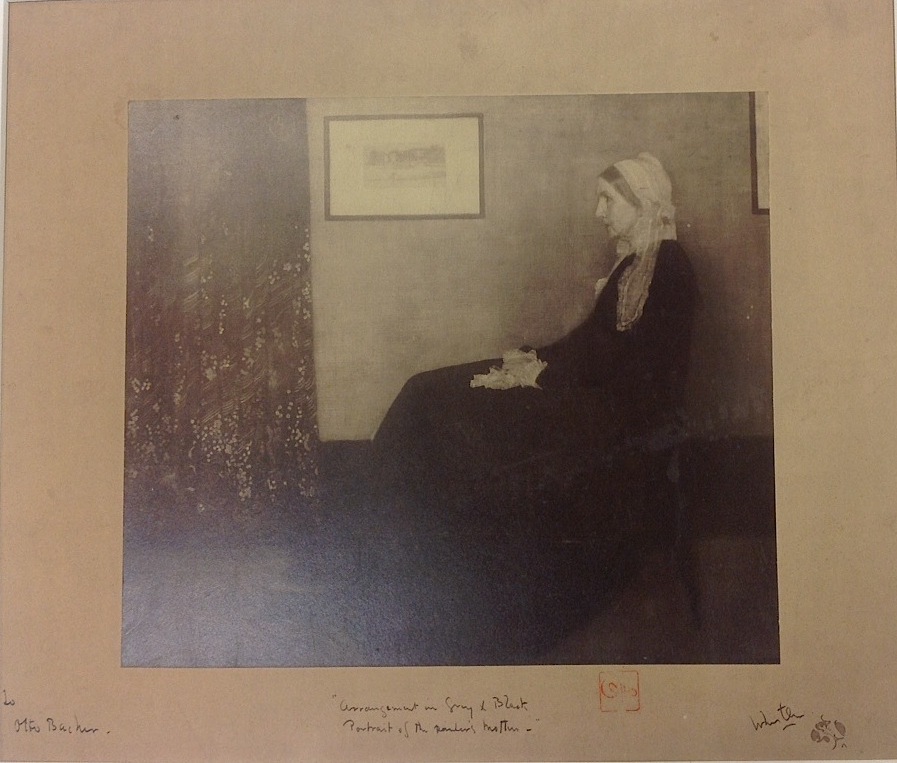 This photograph was taken shortly after Whistler finished his most famous painting, the portrait of his mother Anna Matilda McNeill. She posed for it in 1871 while living in London with her son. The severity of the grey and black palette and of Anna’s stark profile reflect the sitter’s personality and piety. The careful treatment of her face reveals Whistler’s well-known affection for his mother. Yet, by using the detached term “Arrangement” in the title, Whistler directed attention to the aesthetic elements of the painting and downplayed the subject matter. “Arrangement” also has a musical meaning. Whistler used musical titles repeatedly to draw a connection between the abstract quality of music and abstract aspects of composition in visual art. Notably, Whistler included his etching, Black Lion Wharf, 1859 (on view in this exhibition) in the background of this painting.

Whistler earned money with photographs of his paintings and shared them with colleagues. Here, Whistler’s inscription to his artistic follower Otto Bacher probably dates between 1879 and 1886. 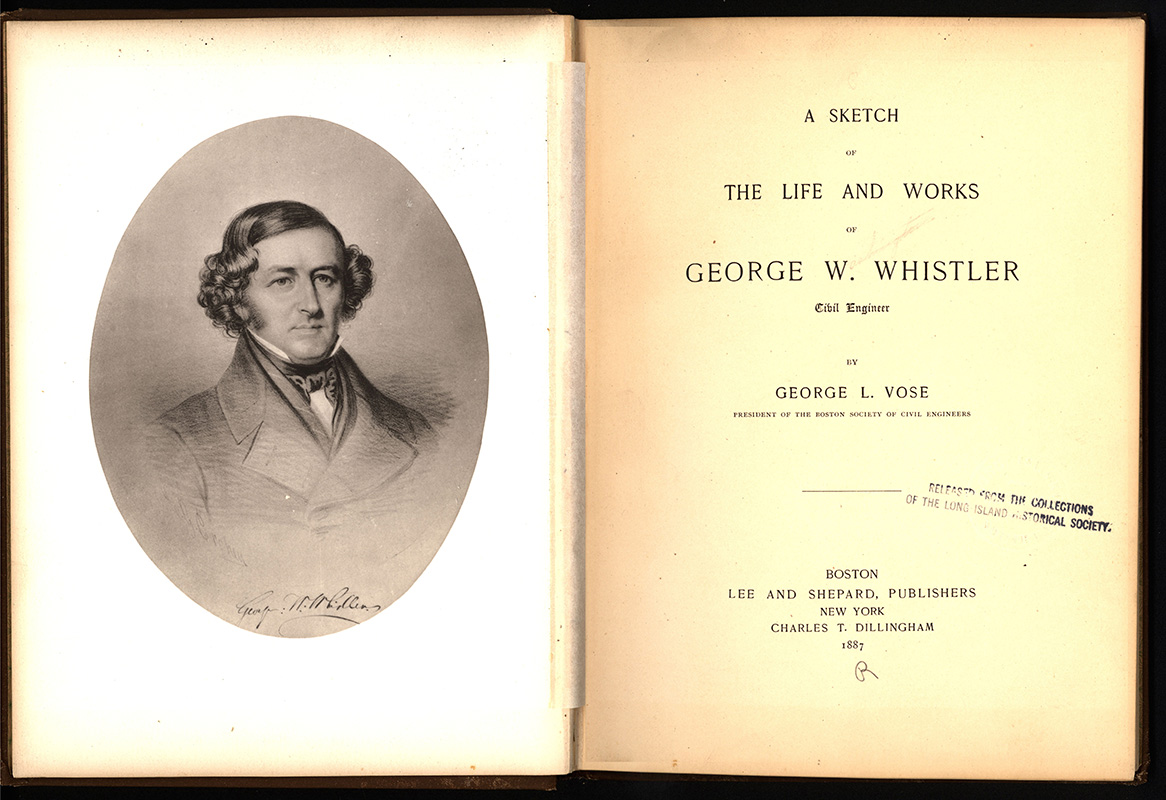 This book is a tribute to the career of Whistler’s father, George Washington Whistler, who died in 1849. It was written by another civil engineer, George L. Vose, a professor at Bowdoin College and at the Massachusetts Institute of Technology. Both George Whistler and Vose specialized in the construction of railroads. 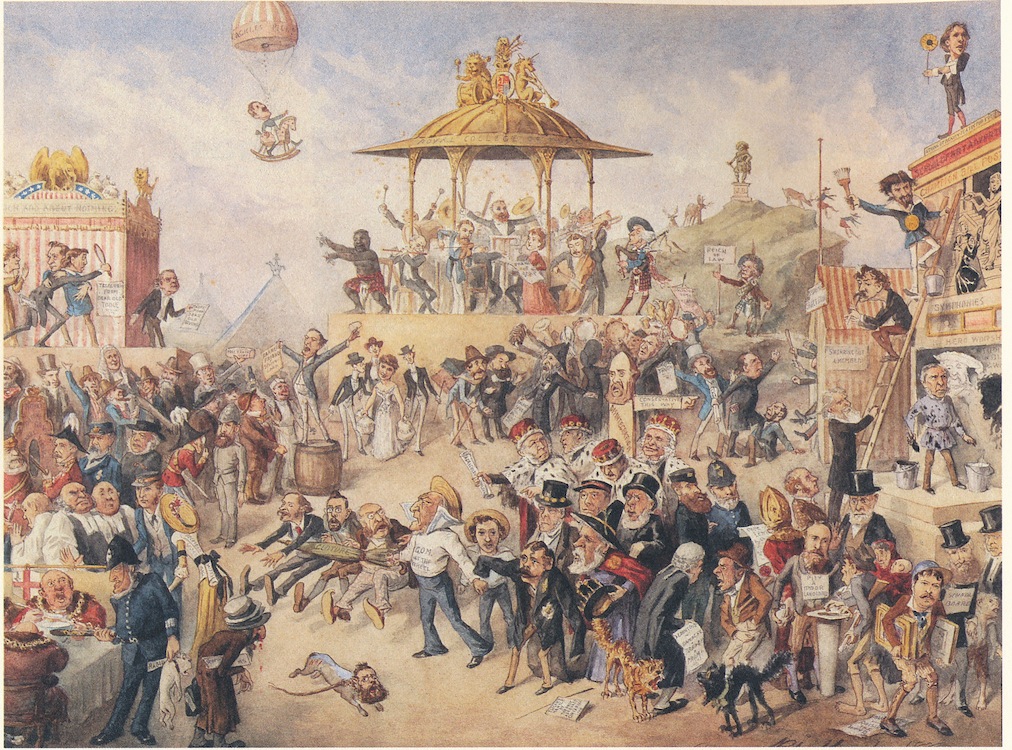 John Wallace’s bustling scene, much like this exhibition, illustrates Whistler’s place within the late nineteenth-century cultural world. Whistler is caricatured—sitting on a ladder at upper right in front of the School of Art—amidst sixty-seven celebrities of the day. Among them are Oscar Wilde—Whistler’s sometimes friend, sometimes rival—and John Ruskin, the art historian Whistler sued over a piece of negative criticism in one of his most notorious controversies.

The Liverpool firm Cope’s Tobacco, a pioneer in marketing and mail order sales, commissioned this watercolor to be distributed as a Christmas card for its customers. It was accompanied by a key identifying each figure.