The Butterfly in Paris

Whistler arrived in Paris in November 1855, in time to experience the grand Salon, part of that year’s Exposition Universelle, and to encounter the anti-establishment exhibition staged against it by Realist painter Gustave Courbet. Whistler’s excitement about the rebellious spirit he encountered and his commitment to depicting modern life, the working classes, and laborers—subjects associated with Realism—persisted throughout his career.

In Paris, Whistler formed important friendships, including the clique known as the Société des trois with Alphonse Legros and Henri Fantin-Latour. Among Whistler’s most important controversies that helped establish his notoriety, was the rejection of his painting Symphony in White, No. 1: The White Girl by the Paris Salon in 1863 and the uproar created by its inclusion in the alternative Salon des Refusés that year. Whistler became a central personality among avant-garde artists redefining the Parisian art world. Evidence of this is found in Fantin-Latour’s 1864 painting, Hommage à Delacroix, where Whistler is at the center of a group of modern artists and writers, including Charles Baudelaire and Edouard Manet. Whistler kept a presence in Paris throughout his career, participating in numerous exhibitions, and later starting an art school there. 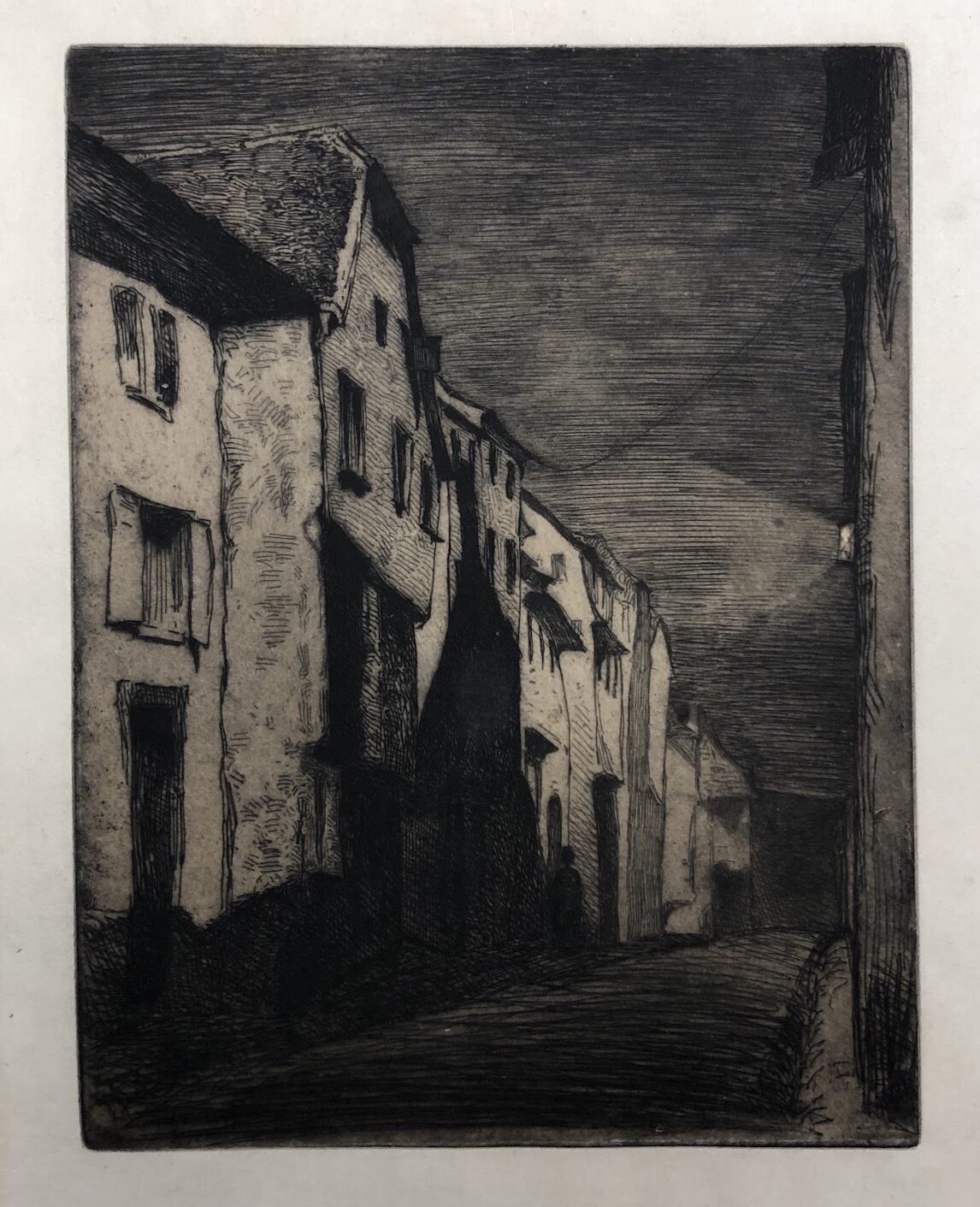 This moody etching was the first of many nocturnes in Whistler’s career. It shows a lone shadowy figure on a street in the Alsatian town of Saverne in northeast France.

It was part of his first published group of etchings called Douze eaux-fortes d'après nature (Twelve Etchings from Nature), commonly nicknamed the “French Set.” Whistler made the etchings, which include both landscapes and portraits, upon the urging of his brother-in-law Francis Seymour Haden and the set is dedicated to Haden. Haden encouraged Whistler to work directly from nature. The landscapes were produced from sketches Whistler made on paper, and some directly on copper plates, during a trip through France and the Rhineland in 1858. The first printing of the plates was done by master printer Auguste Delâtre in Paris. Shortly after, Haden made an edition in London. 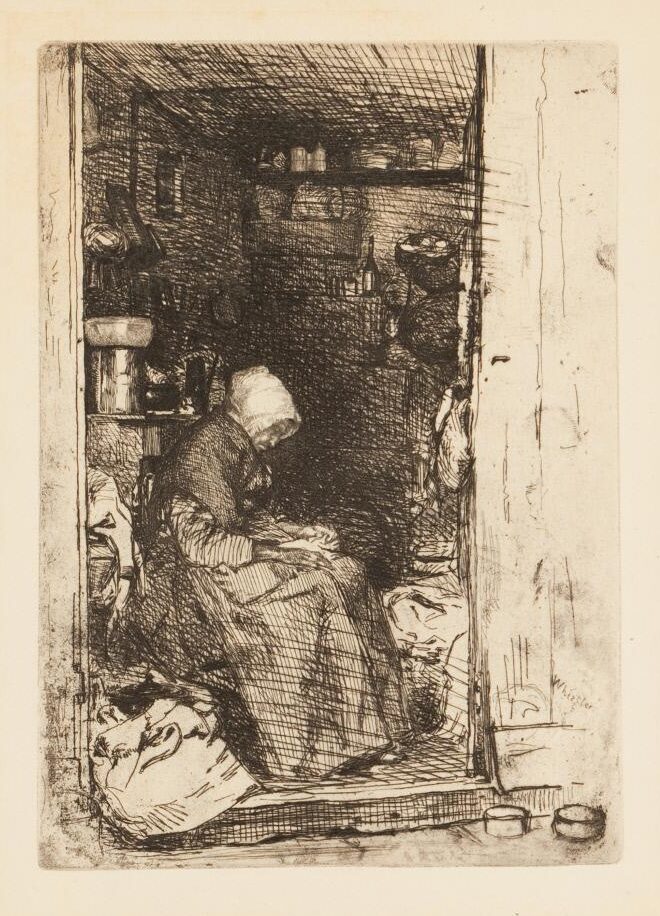 In this image from the “French Set,” Whistler shows an elderly woman working on some rags by the light of the door with a kitchen behind her.  This humble scene of labor reflects Whistler’s early interest in Realism. The compositional trope of a doorway that recedes into a detailed interior recurs throughout his career in different contexts. Often figures are framed by the doorways, as seen here, and in other instances the form of an empty doorway is the subject of aesthetic interest. 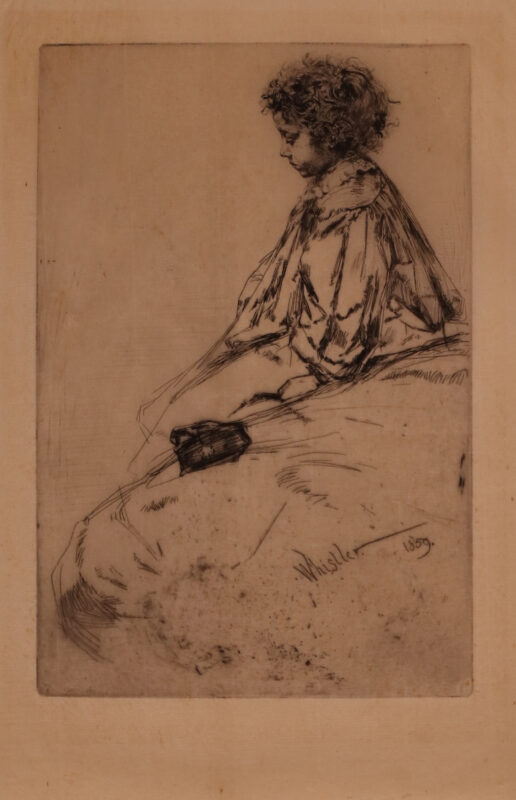 Bibi Lalouette is one of many etched portraits of children Whistler made during his early years in Paris. This child was the son of a restaurant owner whose establishment was a frequent haunt of the Société des trois—Whistler and his friends Alphonse Legros and Henri Fantin-Latour. They accrued a sizable debt there, which Whistler eventually repaid. Even after Whistler left Paris for London in 1859, shortly after making this etching, he remained friendly with the Lalouette family.

Whistler’s visual strategy here, creating a detailed head and upper body, while the lower extremities and surrounding environment are left almost “unfinished,” is seen repeatedly in his etched and lithographic portraits. The question of a work being “finished” or not was controversial for many avant-garde artists in the nineteenth century. The charge of a work being “unfinished” was a criticism often leveled at Whistler. 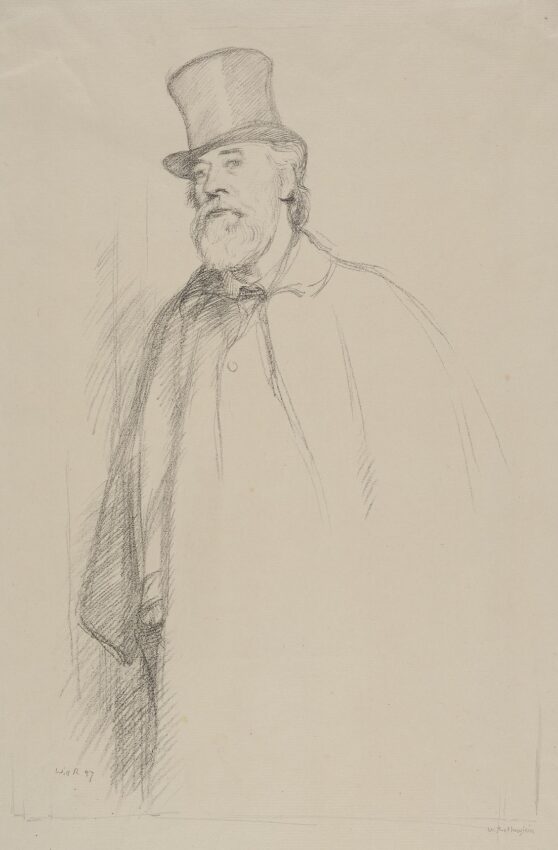 This lithograph by William Rothenstein has several associations with Whistler. As a young artist in the 1890s, Rothenstein became a follower of Whistler in Paris. The portrait was printed by Whistler’s lithographer, Thomas Way. And the subject, Alphonse Legros, was one of Whistler’s earliest friends in Paris where Whistler, Legros and Henri Fantin-Latour formed the Société des trois.

Legros had an esteemed printmaking career. Originally from Dijon, France, Legros moved to London in 1863 upon Whistler’s urging and they lived together for a time. Subsequently, Whistler and Legros had a major falling-out. Legros later became Professor of Fine Art at the Slade School in London where Rothenstein was one of his students. Rothenstein became best known for portraiture, depictions of London synagogues, work as a war artist during the twentieth century, and for serving as Principal at the Royal College of Art. 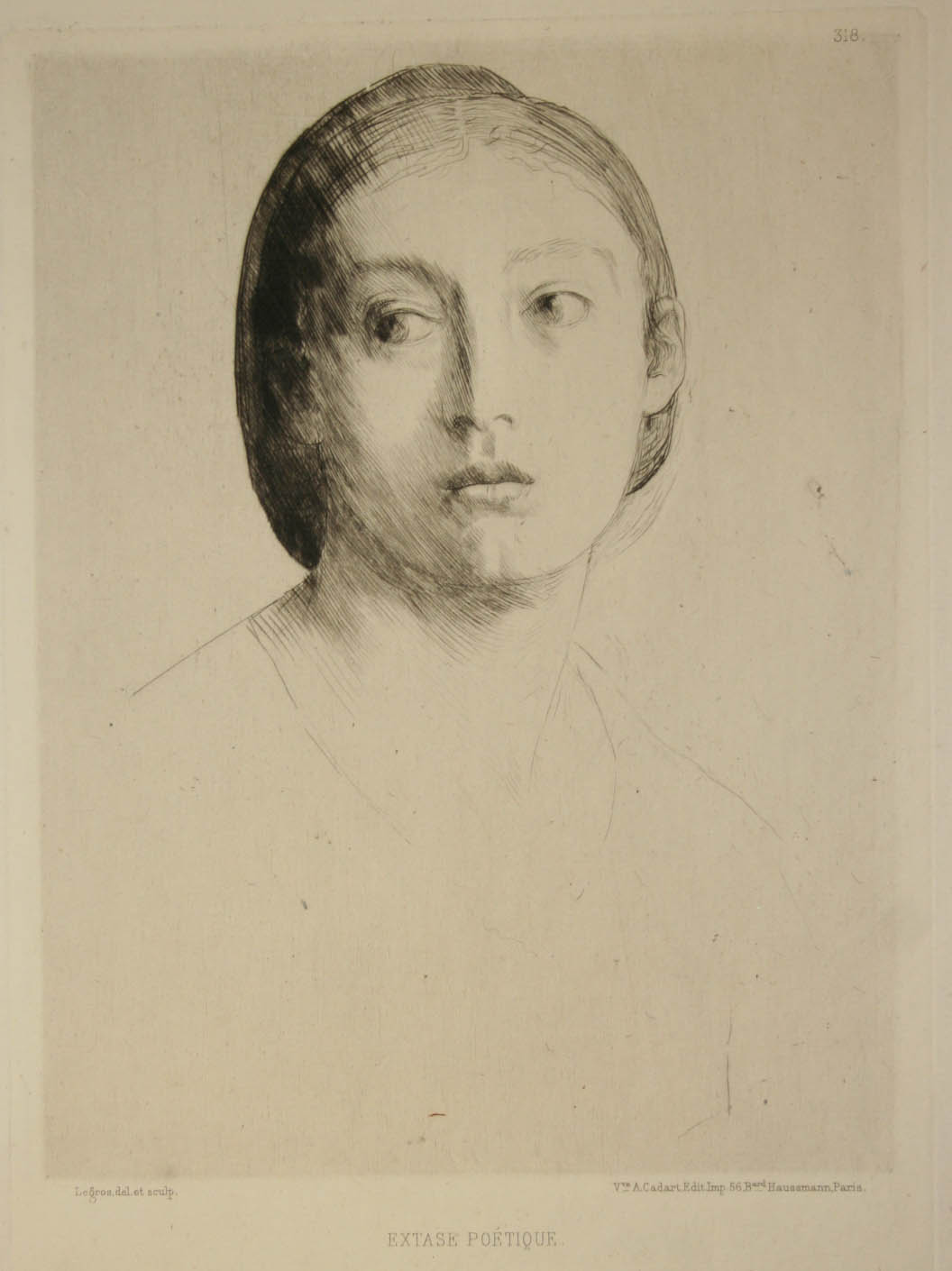 This delicate drypoint was made by master printer, Alphonse Legros. A drypoint print is made by drawing directly into a copper printing plate with a needle, raising a burr of metal that traps ink and creates a velvety black appearance when printed. The strategy of concentrating detail in the face of the subject, while leaving the rest of the composition ambiguous is seen repeatedly in the work of Legros’s old friend Whistler. By the date of this print, 1876, the two had a complicated falling-out that ended their friendship.

1876 was a significant year for Legros professionally. He exhibited numerous prints at the second Impressionist exhibition in Paris, and became Professor of Fine Art at the Slade School in London. 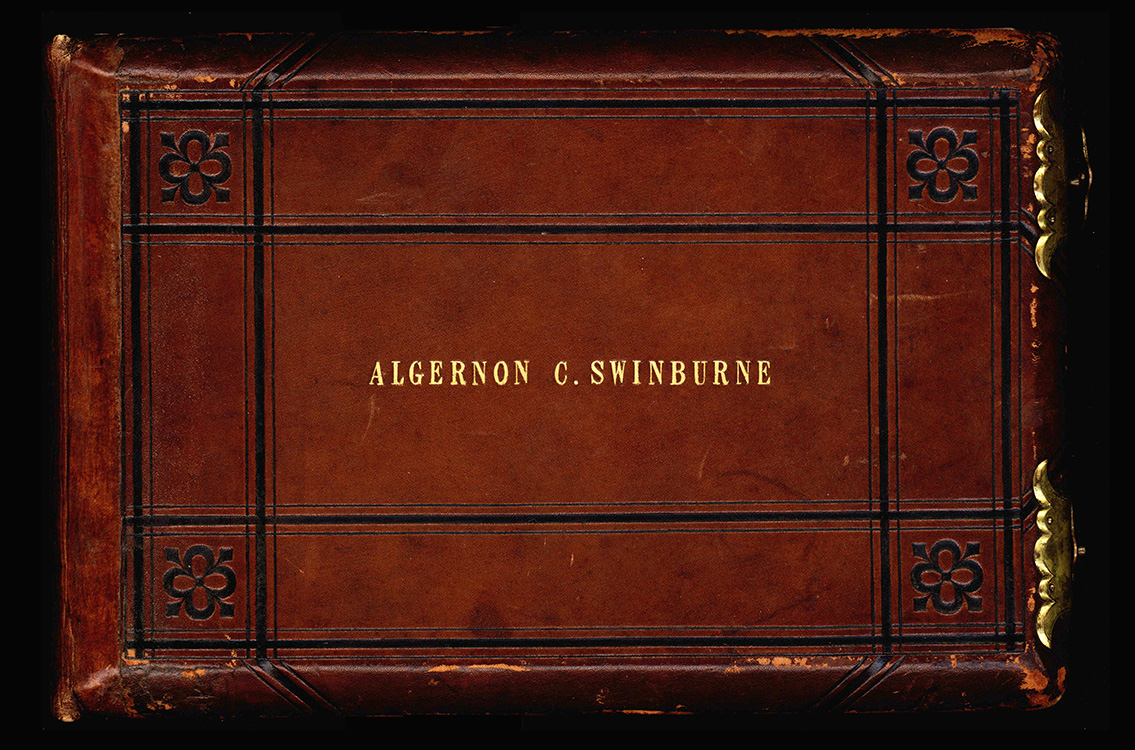 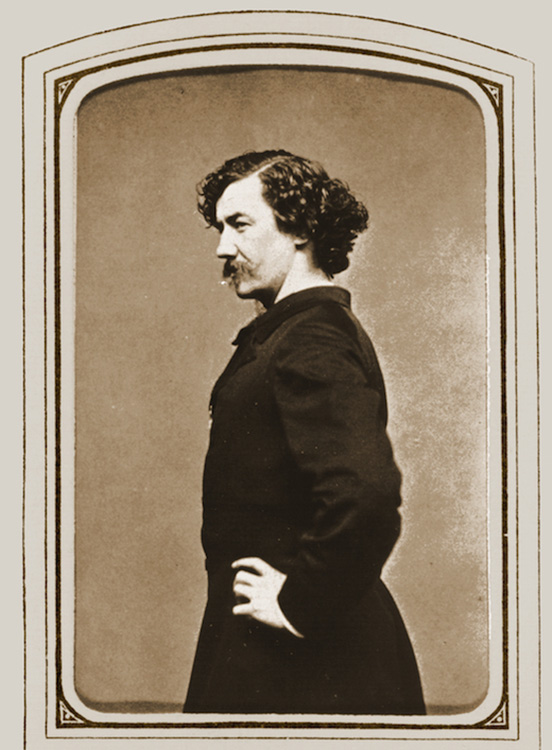 This well-known, dashing portrait by Parisian photographer, caricaturist, and journalist, Etienne Carjat, of a confident-looking Whistler was made during an important year for the artist. Whistler was becoming increasingly established as a notorious figure in the art world. In 1865 he exhibited works at both the Paris Salon and in London at the Royal Academy. In the autumn, Whistler and his model and lover, Jo Hiffernan, were in Trouville, France with Gustave Courbet, where the two artists painted seascapes. Shortly thereafter, Whistler had a falling-out with Courbet. 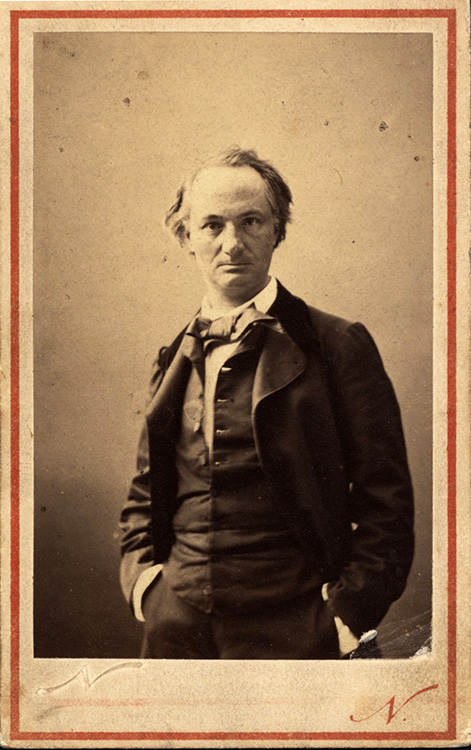 This image of poet Charles Baudelaire was taken by one of the most famous photographers of nineteenth-century cultural celebrities, known by the pseudonym, Nadar. Among his many accomplishments, Baudelaire’s idea that art should depict everyday, modern life instead of traditional subjects involving mythology and religion, impacted a generation of avant-garde artistic practice—including Whistler’s choices of subject matter. 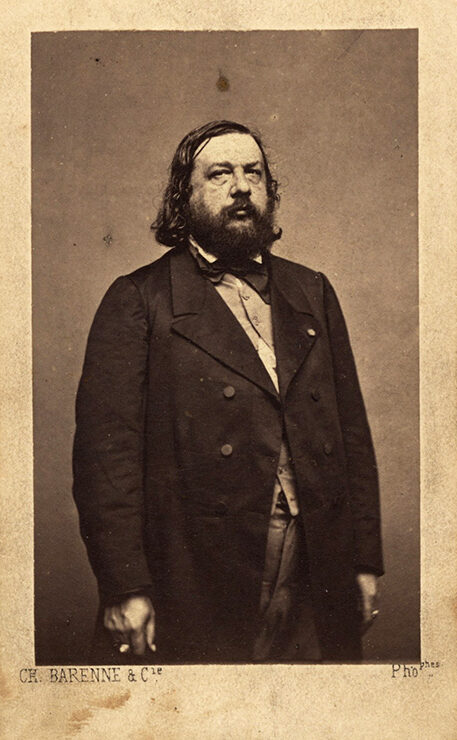 Théophile Gautier was a mid-nineteenth-century writer and an early advocate for the concept of “art for art’s sake.” This idea was one of the foundations of Aestheticism. It was a disavowal of narrative and any conceptual distractions from the primary importance of beauty, and abstract artistic concerns such as form and color. 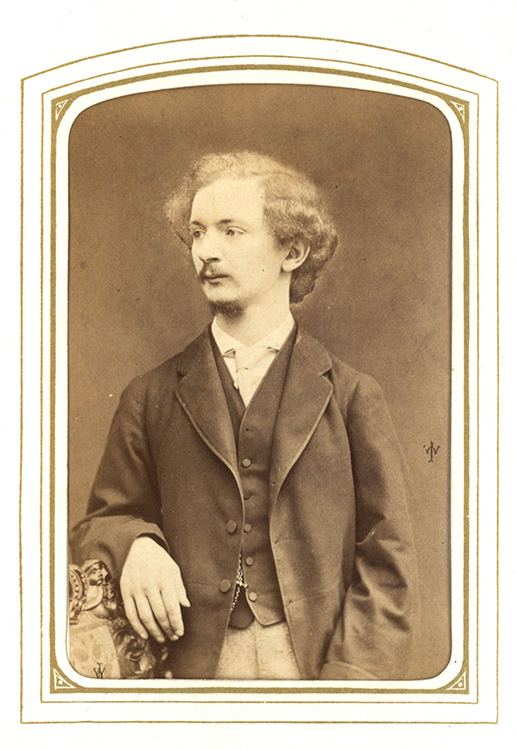 Algernon Swinburne, seen here, was the owner of this impressive compendium of photographs, largely depicting famous cultural figures of the late nineteenth century. Swinburne was a lyric poet whose poems were often deemed shocking for their frank content. He moved in Pre-Raphaelite circles and was friends with Whistler for many years. Swinburne and Whistler had a major falling out over Swinburne’s negative reaction to Whistler’s “Ten O’Clock,” a lecture published in 1888. 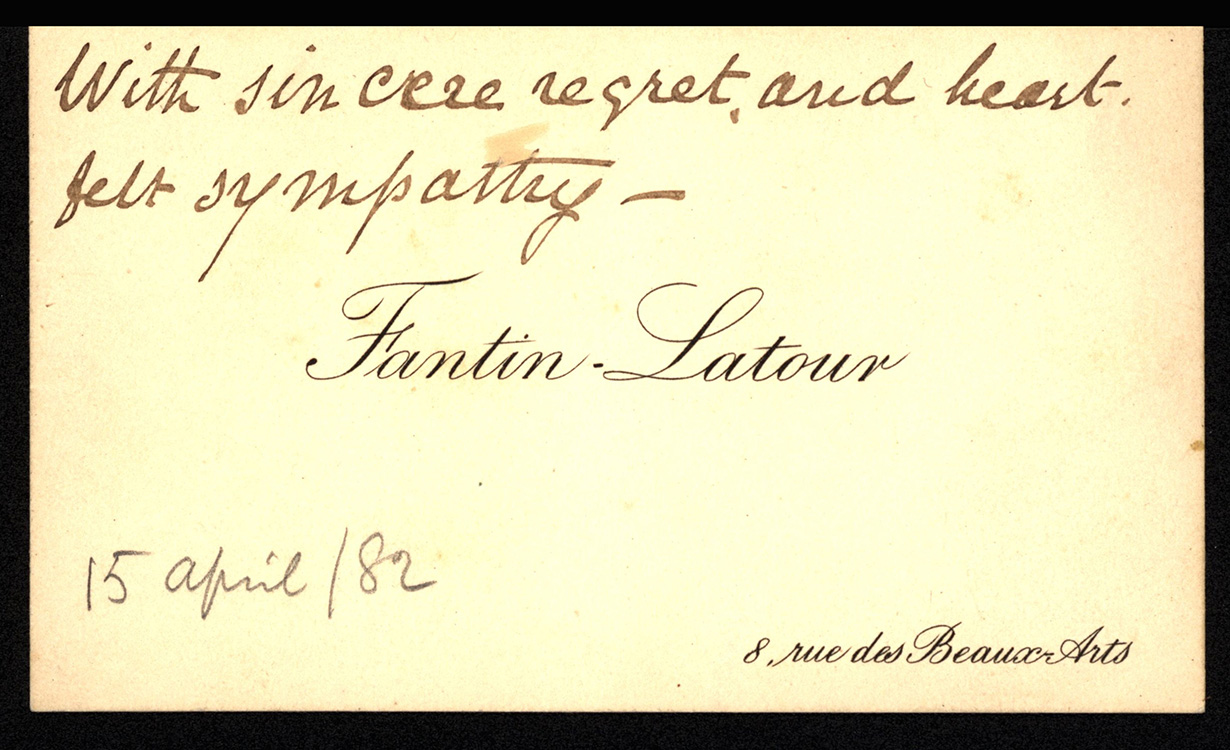 Henri Fantin-Latour was one of Whistler’s most enduring friends and bridged Whistler’s Parisian and London worlds. He was the third member of the tight group called the Société des trois, which formed in Paris in the 1850s with Whistler and Alphonse Legros. Fantin-Latour also spent significant amounts of time in London with Whistler. This calling card demonstrates his (and Whistler’s) social connections with the Pre-Raphaelite circle.

Poignantly, this was sent on the occasion of Dante Gabriel Rossetti’s death. It is inscribed, “With sincere regret and heart-felt sympathy” and endorsed “18 April /82” by William Michael Rossetti, who has written on the back, “The celebrated painter of flowers, etc. - Refers to Gabriel's death.” Lush floral still lifes were among the most prevalent subjects in Fantin-Latour’s career. 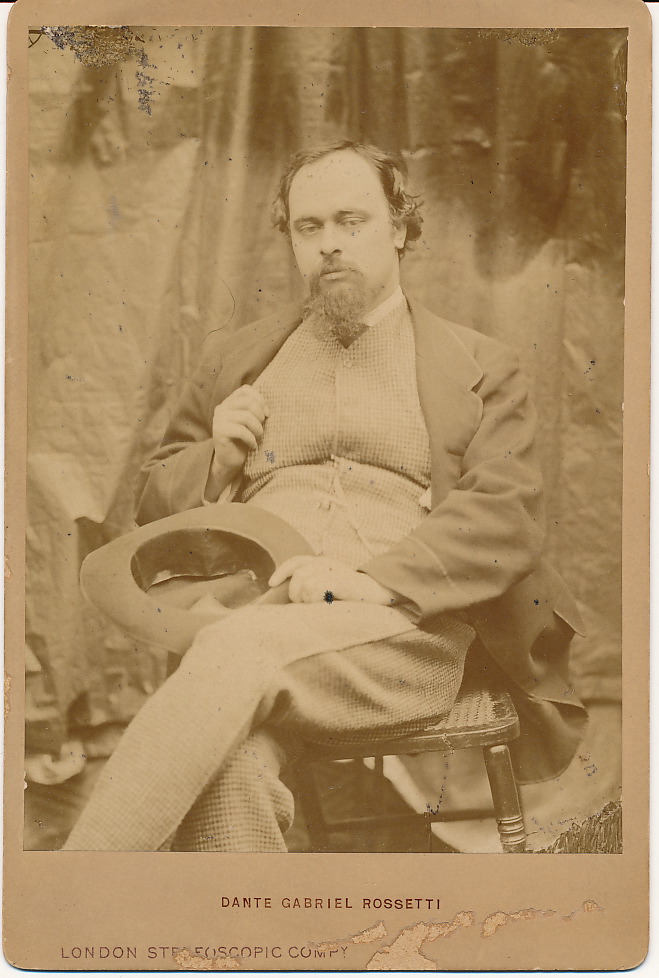 In London Whistler became connected to many figures associated with the Pre-Raphaelite movement, a group of painters, poets, and critics who, in 1848, formed a “Brotherhood” in protest against academic tendencies in contemporary British art. Whistler was attracted by their rebellious stance and became particularly friendly with the bohemian painter and poet, Dante Gabriel Rossetti, one of the founders of the Pre-Raphaelite Brotherhood.

This portrait was taken in October 1863 by author of Alice’s Adventures in Wonderland, Lewis Carroll, who was also a major photographer. Carroll visited Rossetti at his home in Chelsea, a neighborhood abutting the north side of the Thames, made fashionable by such artists as Rossetti and Whistler, who had moved there in 1863. 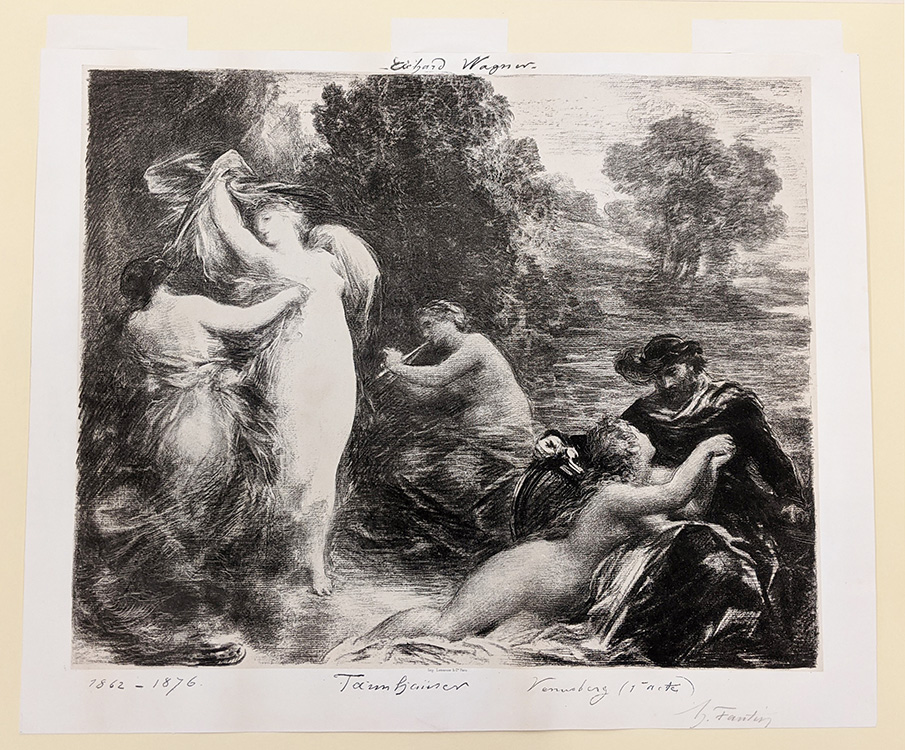 Henri Fantin-Latour was one of Whistler’s most longstanding friends. The French artist’s work, however, departed strongly from Whistler’s art. In much of his printmaking, Fantin-Latour gravitated to sensual and narrative imagery, quite different from Whistler’s detached sensibility. Yet, they did share some interests. Both were early advocates for lithography as a purely artistic medium. This print was Fantin-Latour’s first attempt at making a transfer lithograph, a method in which the artist’s drawing on paper is transferred onto a printing stone. Many of Whistler’s own lithographs were made using this method.

Another of their common interests was the connection between visual art and music. While Whistler found a correlation between the abstract nature of music and compositional elements of paintings and prints, Fantin-Latour was more interested in illustrating musical narrative associations. This print’s subject is Richard Wagner’s opera Tannhaüser, here depicting the protagonist lounging with Venus in a decadent garden. 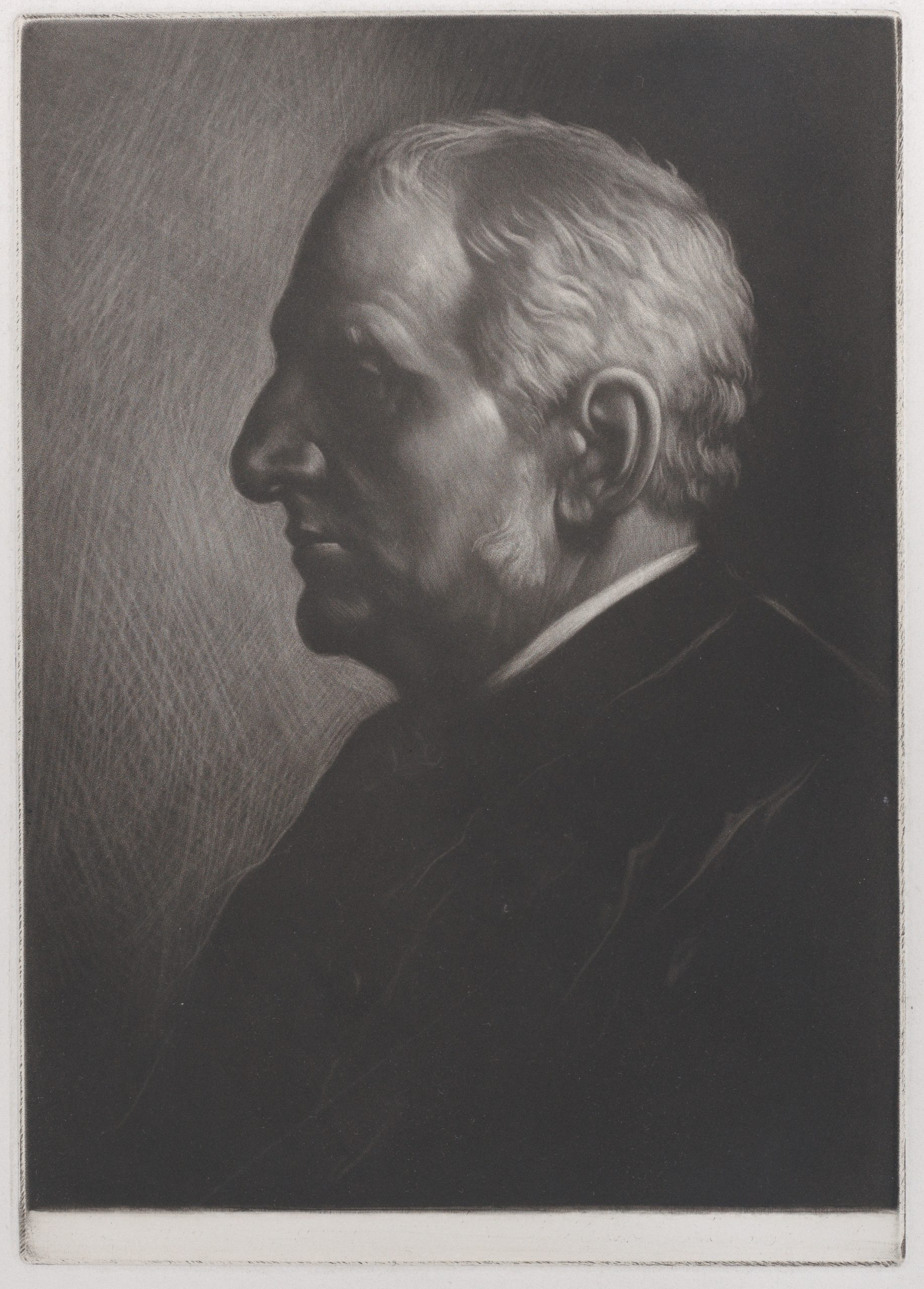 This mezzotint, a form of etching made using tools that create dots rather than lines, was made by Whistler’s old friend Alphonse Legros. It presents a stern portrait of Whistler’s brother-in-law, Francis Seymour Haden. By 1881, both Legros and Haden were out of favor with Whistler.

Legros, Haden, and Whistler were important figures in a phenomenon known as the etching revival in the late nineteenth-century art world, promoting etching as a fine art. In the early 1860s Legros was among the founding artists associated with the Société des Aquafortistes (Society of Etchers) in Paris, a group that helped modern artists produce and publish their etchings. Haden’s main career was as a doctor. Before he became an artistic etcher, he first learned etching techniques to hone his fine motor skills and to train his eye while studying to be a surgeon at the Sorbonne in Paris.