In their reflections, students also recognized and analyzed injustices that are part of so many people's daily experiences. Logan Gregory's haiku and drawing provide a commentary on discrimination in everyday life. According to Gregory, the artwork is about "how discrimination against minorities in America is something that goes unpunished every day." The drawing depicts three birds segregating and bloody chains in the foreground. The artwork refers to America when it says "under one nation," while the red letters spell out as "Crime No Justice," reflecting the prevalence of injustice that overcasts society.

Sarah Bernstein. "What Do You Do When a Cop Pulls You Over," digital artwork, 2020.
View Metadata 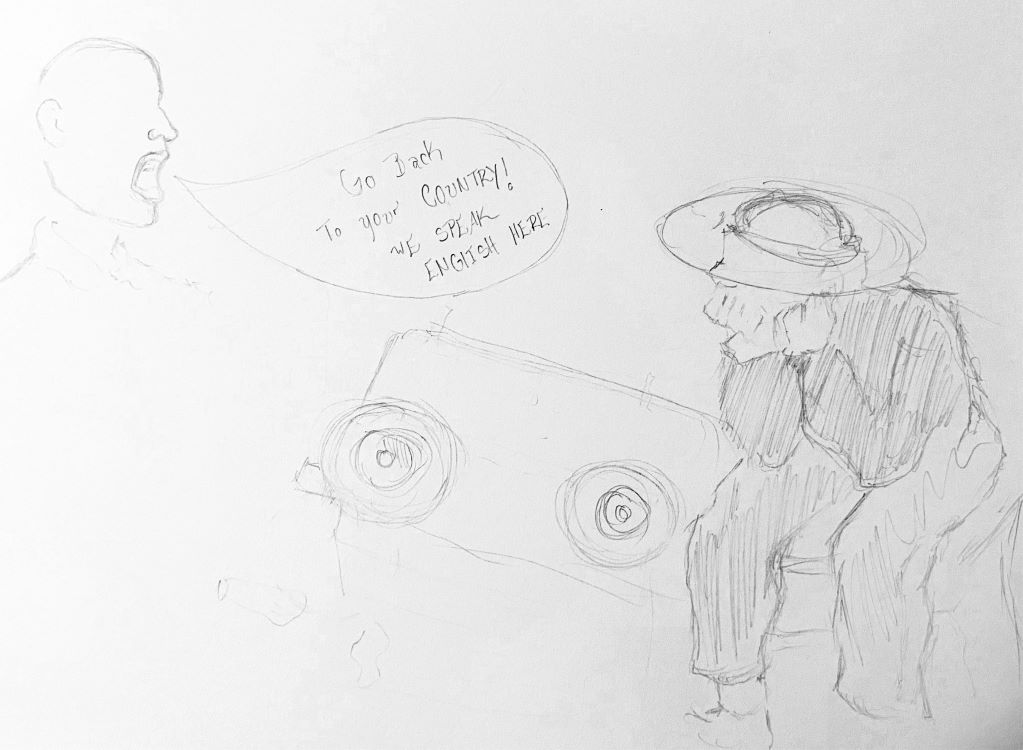 Everyday injustice comes in many forms. Sarah Bernstein's digital artwork reflects the fear that originates from racial discrimination. Bernstein explains, "Even though this should not be how it is, in the justice system there is a lot of racism. The graphic displays the reality of society today, and how children are being raised to have knowledge about the inequality going on in our world right now."

Lesly Penate Gomez's drawing resonates with the fear created by discrimination. Gomez explains that the artwork portrays a hate crime that "took place in the state of California where a Latino man was verbally harassed by a white couple who intentionally destroyed his small food stand." She goes on to note, "more and more hate crimes against the Latin community [are happening]. [People from the Latin community] are continuously judged for their accents, their appearance, their language, their culture." 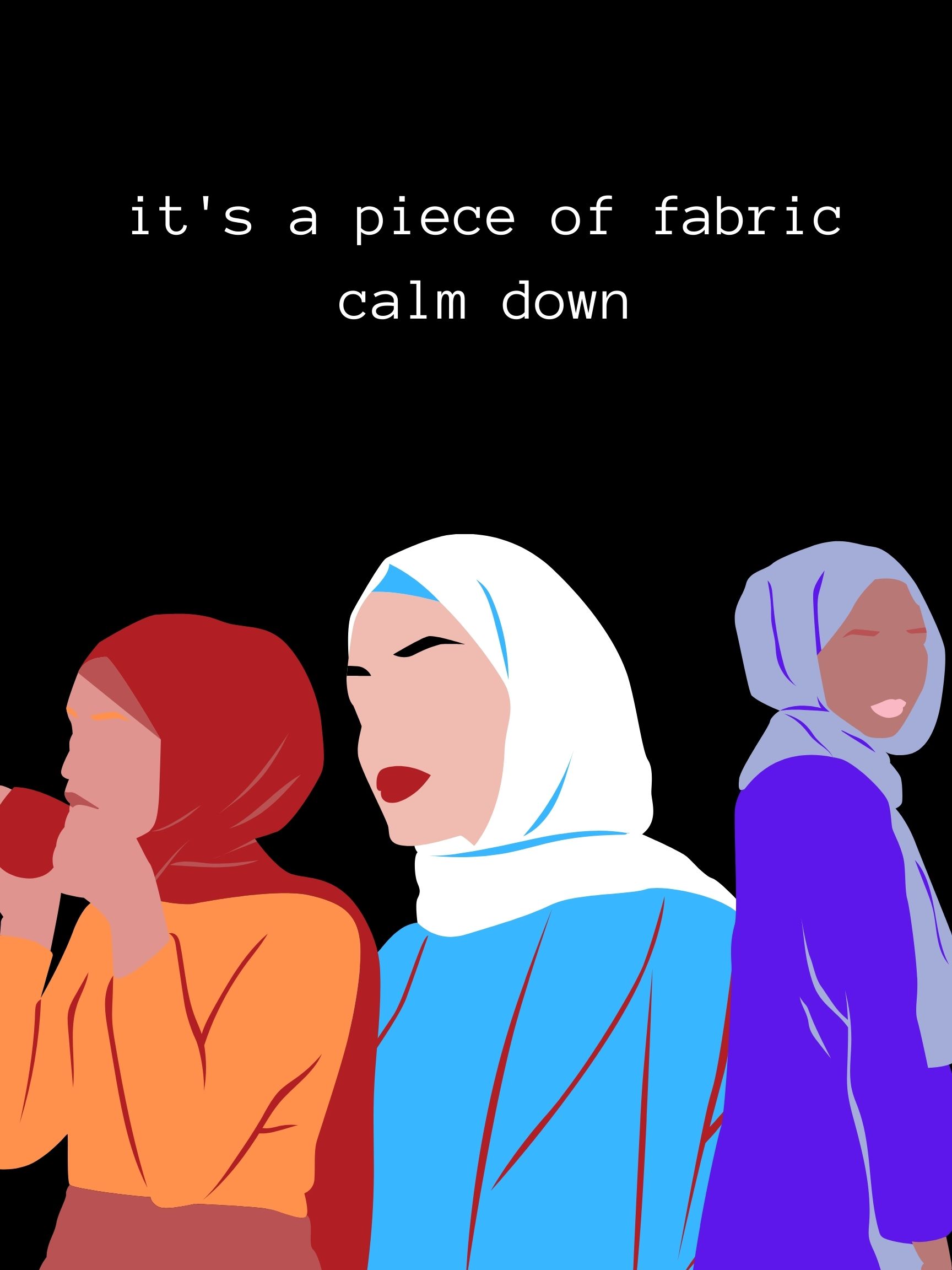 Discrimination not only targets a person's physical appearance and accent but also attacks their culture and religious belief. Nadia Sheikh's digital artwork shows women with hijabs. Sheikh explains that she "designed digital women wearing the Islamic covering and simply saying it's just fabric not a sign of oppression or hate. If we did not have this mentality, then so many people would not be suffering right now."

Elif Akilli continues the discussion on everyday injustice by identifying rape as a common but less exposed issue faced by women. Akilli explains, "it may seem like rape is not an issue, but believe it or not women are getting raped, and they are still getting blamed for it. Women deserve a life too. They should not be a victim to someone who is a sexual harasser." 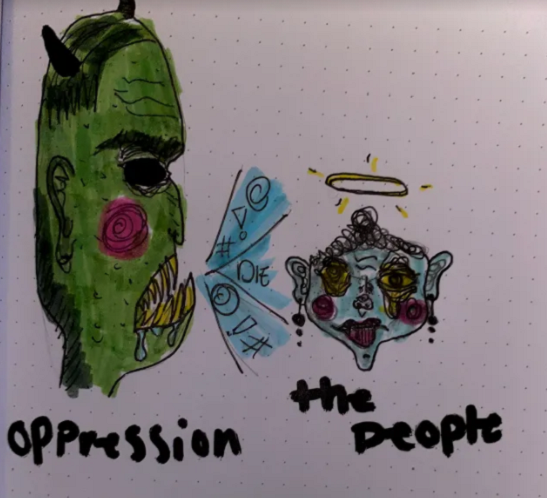 Injustice happens when people's voices are not heard. In Ruby Knipe's work, oppression is a giant, grotesque monster that uses its loud voice to cover "the people's" voice . According to Knipe, the monster is a representation that "shows how much bigger [oppression] is than just one person." 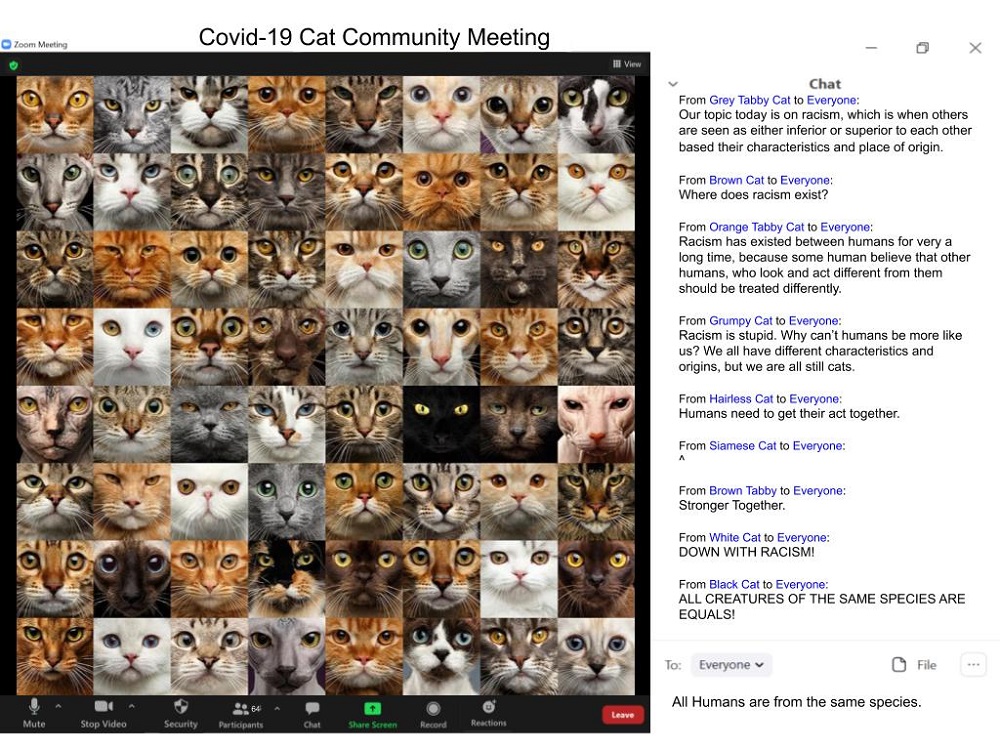 In a society where people face violence and fear everyday, it is necessary to explore new ways to confront injustice. Makayla Randolph's "COVID-19 Cat Community Meeting" represents cats of different breeds and colors discussing the topic of racism among humans. Through their discussion, the cats question why racism exists and proclaim, "ALL CREATURES OF THE SAME SPECIES ARE EQUALS!" The cats model a supportive, inclusive community where everyone can unite and confront injustice.