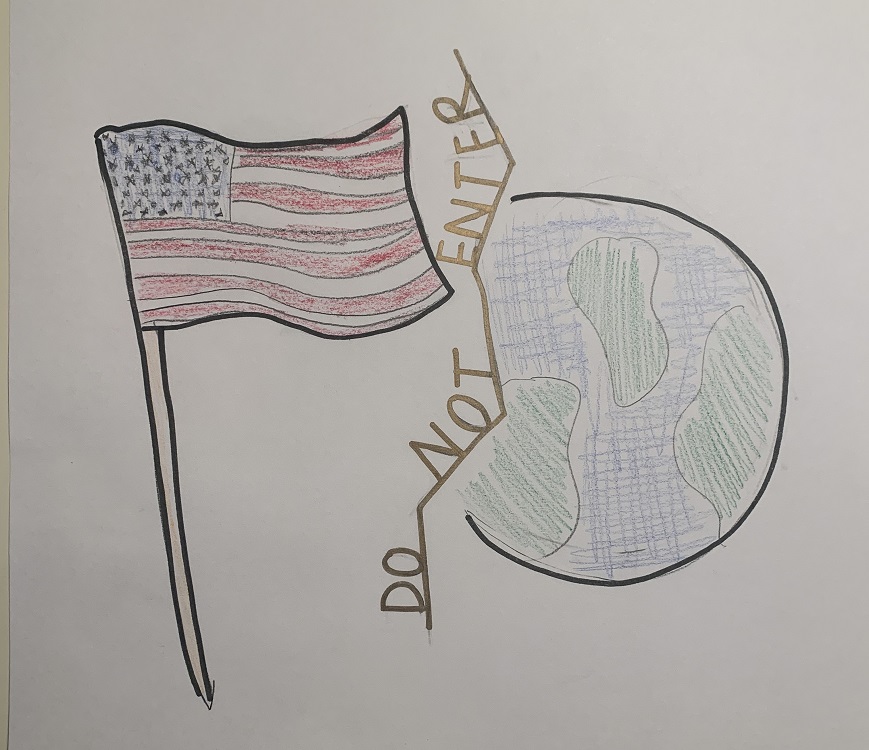 Vargas' story in Dear America not only reflects the difficulties undocumented immigrants are facing, but also comments on ongoing problems in the United States. For many undocumented immigrants as well as U.S. citizens, it is difficult to achieve the ideals of the American Dream: liberty, opportunity, equality, freedom. In this section, students question American ideals and express their concerns about the United States' ongoing issues.

Ashley Amman's drawing recognizes the problem that while the United States closes its door to the immigrants, the world shuts its door to the United States too. As she explains, "I drew a symbolic image of America dividing itself from the rest of the world. In general, many Americans are closed-minded or ill-educated regarding immigration in the USA. As explained in Dear America, sometimes the situation is much more complicated and cannot be dismissed so easily. It is important that all views are respected, but individuals must consider the situations faced by their global peers." 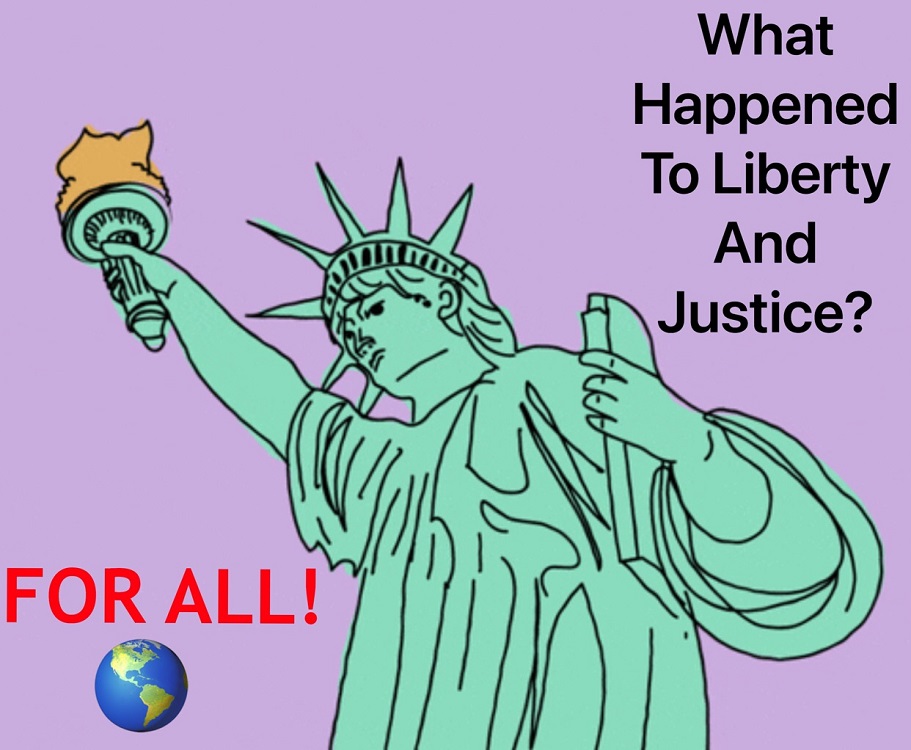 Jordyn's digital artwork asks the question: "What happened to liberty and justice FOR ALL?" In a poem exploring issues of racial discrimination, Jamie Kluft makes a related observation:

Describing the creative process for the artwork, Jordyn notes, "As Vargas explained his immigration experience, it reminded me of the old times where many immigrants would sail through New York Harbor on their way to Ellis Island and see the Statue of Liberty. That single statue gave millions of people hope of bettering their lives here in America. Today, the United States doesn't provide the same level of hope anymore. People are against each other every day based on things such as immigration status, sexual orientation, race, and gender. What happened to liberty and justice FOR ALL? The United States that we learned about in our history textbooks was a place of freedom and exception, I cannot understand where all this hate came from. I believe every human being should be treated equally and support one another. Unity makes a nation strong and until the American people see that, our country will not work at its full strength." 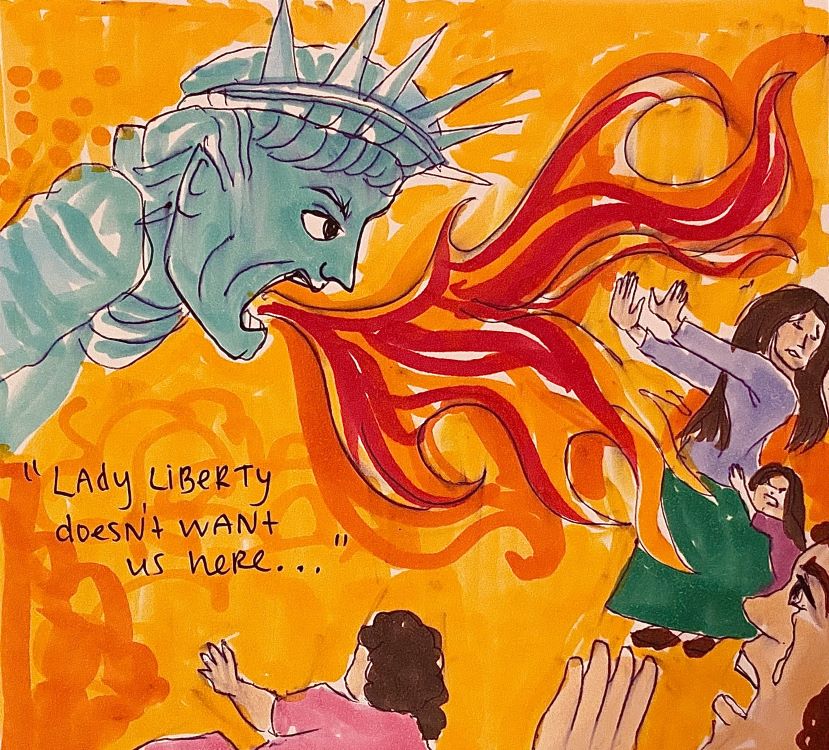 The Statue of Liberty was the first view of the country for many immigrants during the country's early history. Hence, it became the embodiment of new opportunities and the American Dream. However, Anastasia Slobodov portrays the iconic symbol as a representation of xenophobia. According to Slobodov, "in the image I drew, I was mainly driven by the keyword 'xenophobia.' What I'd like viewers to take away is to try to put themselves in the shoes of immigrants and really think about how difficult adapting to a new environment must have been, and on top of that, feeling so unsafe and unwelcome. The flames represent America's hostility and how extremely tedious and exhausting the citizenship/ green card process is."

In the poem, "America – Land of the Free," Zeppelin addresses the contradiction between American ideals and reality. As Zeppelin explains, this poem is about privilege, and "it describes who you have to be in order to be free in America."

Similarly, Jeremiah Epting writes a poem exploring the discrepancy between lived experience and the ideals of freedom, safety, justice, and love. Discussing freedom, he writes: 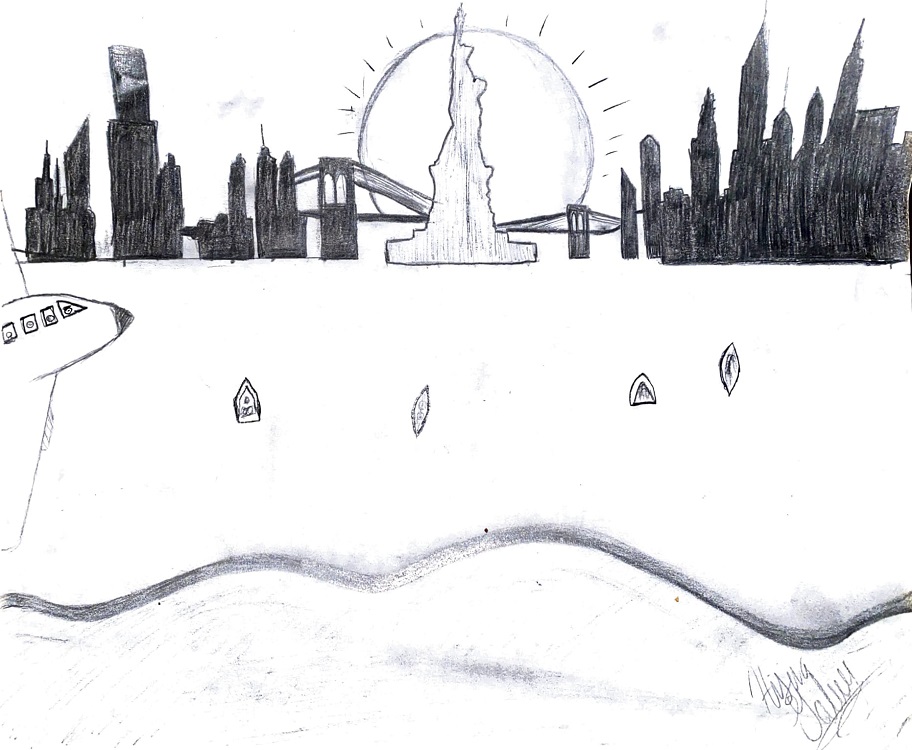 Despite so many challenges, many people still immigrate to the United States for a better life. In Jessica's digital artwork, the ships sailing in the roaring sea to reach the American flag represent "the struggles that people go through to get into this country and how brave they are for doing so." Jessica also states that "they did not deserve all the hardship they went through."

Similarly, Hisina Gaber's drawing portrays the United States as a destination with hope. Gaber sketches the Statue of Liberty in front of the rising sun, explaining that, "I drew some boats and an airplane to signify the immigrants coming to America or their new land. I know for many immigrants their old land was not safe or a happy place, therefore there is a black barrier behind them."

Finally, in a poem, Danielle Linekin questions how children in the United States are taught about issues of race and equality. Linekin expresses hope for future change, writing:

Our fight is not over,
Although I don't know if there could ever be closure,
But justice will be served and change will be made,
because I believe in humanity,
and that we will prevail one day.