Practitioners known as “book artists” challenge readers and viewers to confront the materiality of books in new ways, and often prompt the question- “Is this a book?”  Often the unusual formats of these books are a key to provoking this question. For example, book artists often embrace unconventional, innovative bindings and book structures. The books go beyond the use of illustration, which incorporates art into the pages and content of a book, to reimagine the book in its entirety as a work of art. Moreover, many of these books can be manipulated, folded, and reconfigured in numerous ways that highlight the importance of movement as an aspect of the experience of engaging with a book. Many of these avant-garde book projects relate to concerns about the place of the individual and identity in relation to social and political pressures. For instance, Chilean artist Maria Verónica San Martin’s book In Their Memory, unfolds like an accordion, and speaks to the brutal impact of an oppressive and violent political dictatorship on individuals.

Crazy Quilt is an artist’s book that examines the issue of mental health and defies the conventional format of a bound book. It unfolds into a square of nine panels that can lie flat, thus resembling a quilt. According to the Women’s Studio Workshop’s description, this book “assembles the experiences of women who have been institutionalized for insanity in the last century.” Some of the women quoted include Charlotte Perkins Gilman, Frances Farmer, and Elizabeth Packard.

This book is a testament to the many individuals who disappeared under the military dictatorship that controlled Chile from 1973 to 1990. Every aspect of In Their Memory, from its structure to the text and images, is meant to convey a message of resistance. The photographs of the disappeared victims are reproduced from a website maintained by family members. The text lists the victims’ names. 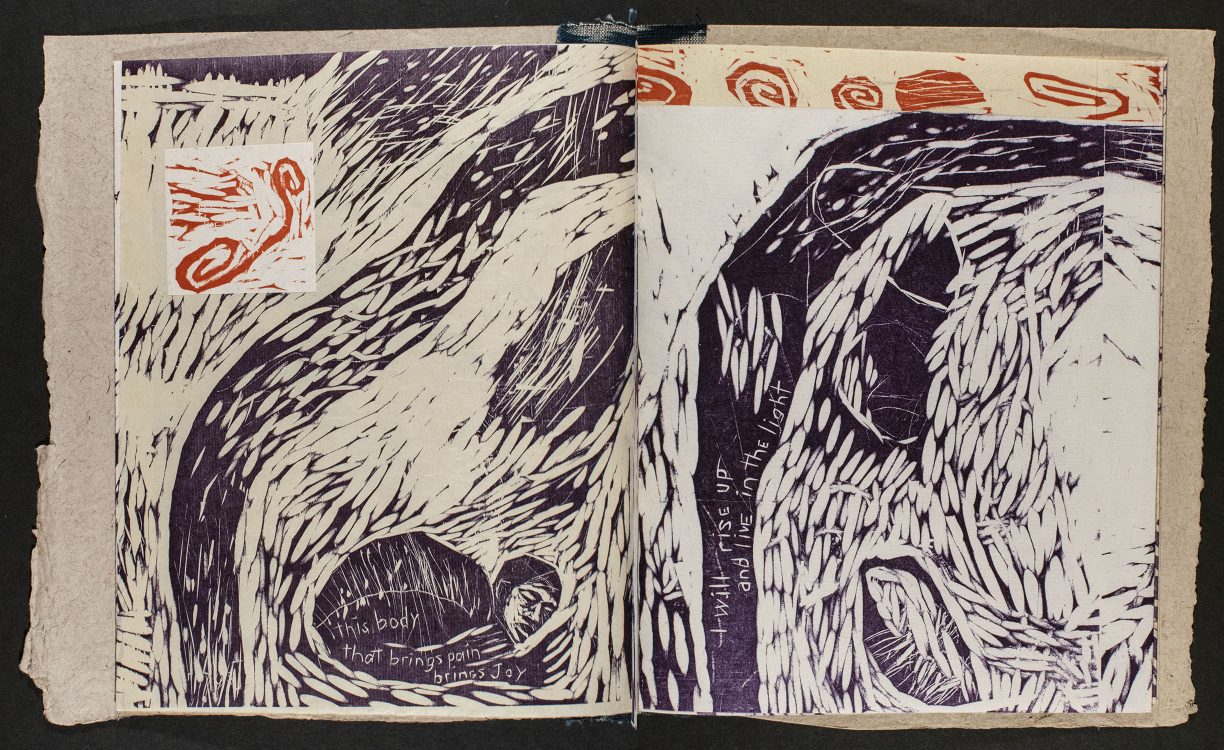 This intimately crafted volume presents prints and collage made using Japanese papers and handmade paper covers with a fabric binding, stitched together. Words and imagery intermix on colorful pages giving a palpable sense of the artist’s hand at work carving the roughhewn woodcuts. This type of woodcut carving is well-known in modern and contemporary Japanese printmaking. The final page of the book explains, “It was made to affirm the lives and bodies of people with disabilities.” 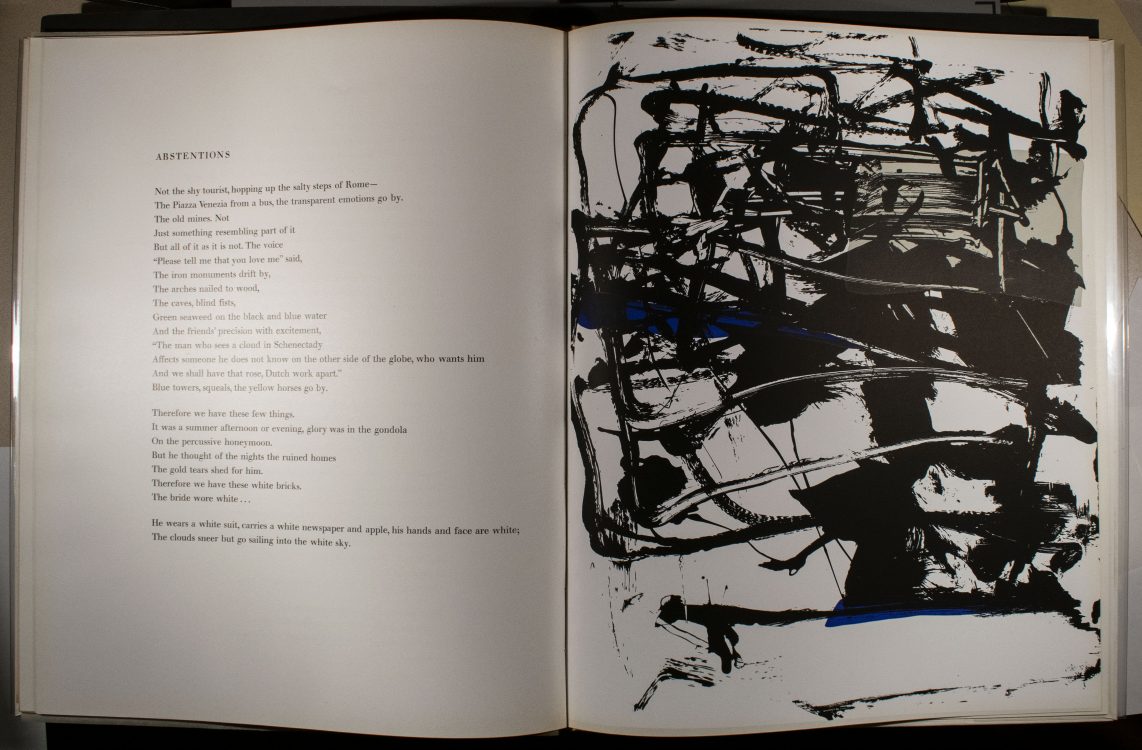 This volume connects the poetry of John Ashbery with the art of Joan Mitchell. It is from a set of four volumes produced by Tiber Press in 1960, pairing major avant-garde artists with important poets. The full set includes three other collaborations:

In each book, art and text are presented with equal weight. Each form of expression is given ample space. According to the colophon, the artists made their screenprints at Tiber Press in New York in 1960, while the printing of the text and the binding occurred in West Germany and New York.

These pages show the only instance in the Ashbery / Mitchell volume where a full poem faces a work of art. All of the prints by Mitchell involve the iconic splatter of abstract expressionism – featuring black, white, grey, and bright accent colors. Interpreting the role of a fully abstract illustration in relation to a work of poetry is left entirely to the viewer. 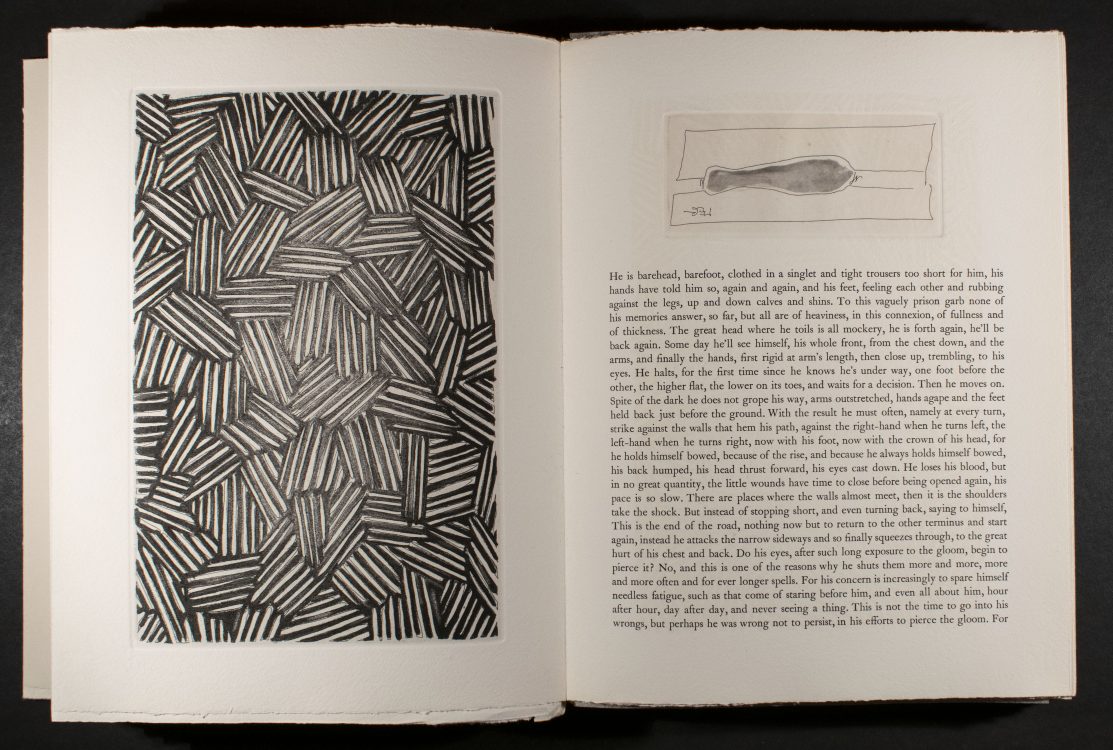 In 1972, Petersburg Press instigated this collaborative project between Samuel Beckett and Jasper Johns. It is a collection of eight short prose pieces written by Beckett over a number of years. Beckett originally wrote all but one of the pieces, or “Fizzles,” in French and he later translated them into English for this book project. Fizzle 7, called Still was written in English. Artist and author met in Paris and discussed their vision for this book. It is an important example of an author and illustrator working together to agree on the appearance and content for an illustrated book.

Johns chose to create works only for Fizzles 1, 2, 4, 5, and 6. In Paris, with the assistance of printer, Aldo Crommelynck, Johns made thirty-three intaglio prints for the interior of the book. And, with William Law from Petersburg Press, Johns made four-color lithographs for the end papers. The illustrations involve signature forms and types of mark-making associated with much of Johns’ work. The elaborate project took several years and was published in 1976 as a limited edition of 250 signed by Beckett and Johns.

Grunion are small fish who inhabit the waters off the coast of California and Baja California in Mexico. The grunion run is a mating activity, in which females swim up onto the beach, and use their tails to dig holes in which they deposit their eggs. Soon afterward, the buried eggs are fertilized by males. During the next high tide days later, the eggs are washed into the sea. In Blassingame’s artist’s book, handmade paper serves as the illustration, its texture and patterns evoking the beach and the presence of the mating fish. As displayed here, the book is open, so that its four pages are all visible at once. 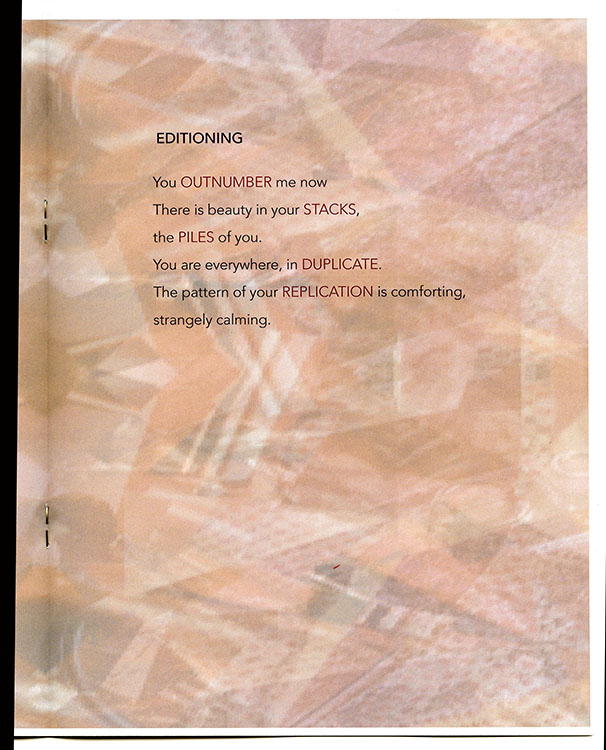 A Love Story recounts its own creation. Through poetry, it evokes the process of creating an artist’s book, from “conception,” through writing, editing, binding and seeing the book acquired by collectors and institutions. As part of the process of making it, Blassingame made collages from torn up magazines and newspapers. Digital reproductions of the collages serve as the book’s artwork. Blassingame is considered one of the most important book artists working today.