Howard Pyle and His Students 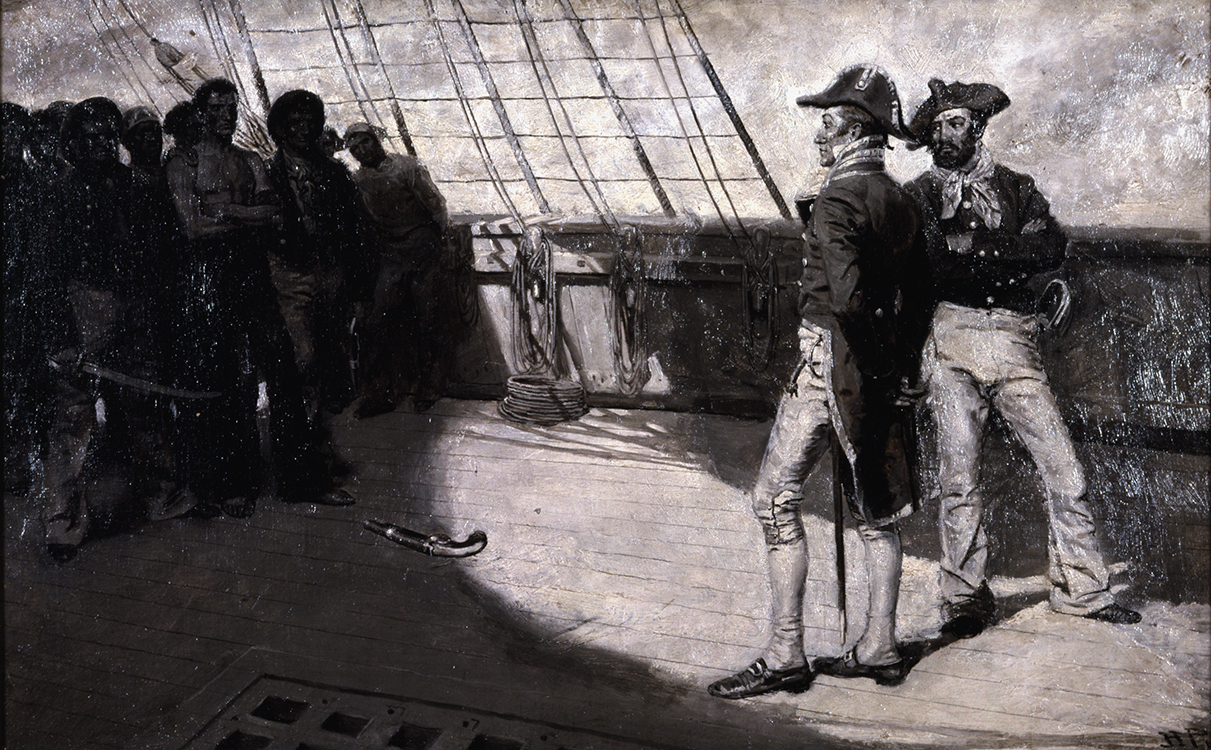 Howard Pyle made this monotone oil painting in an early phase of his career. It was part of the process of creating an illustration for Thomas Wentworth Higginson’s article, “The Second War of Independence.” Harper’s New Monthly Magazine published the article in April of 1884. 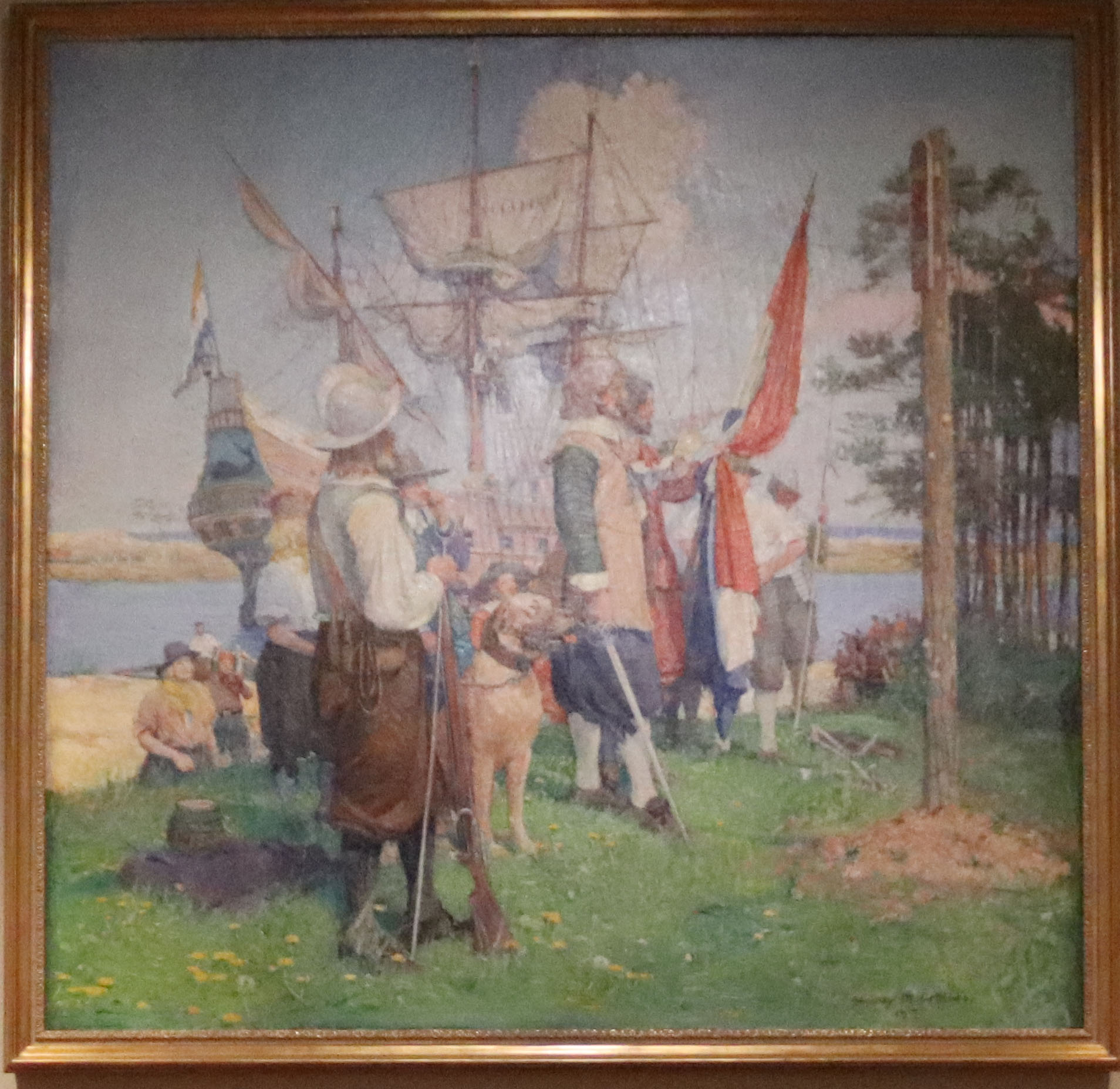 The Landing of the DeVries Colony at Swaanendael, 1631, 1917
View Metadata

Stanley Arthurs was among Howard Pyle’s most prominent students. In this large canvas, he imagines a moment of local colonial history that took place 286 years prior to the painting’s production. An attempt at historical accuracy inevitably blends with artistic license. The Landing of the DeVries Colony was reproduced in a number of different ways, including as the cover for the Architectural League of New York Yearbook (1918), as an illustration for A History of Delaware by Walter A. Powell (1928), and for a commemorative stamp. The painting was first loaned to University of Delaware in 1917 by H. Rodney Sharp when it was hung over the fireplace in its current location. 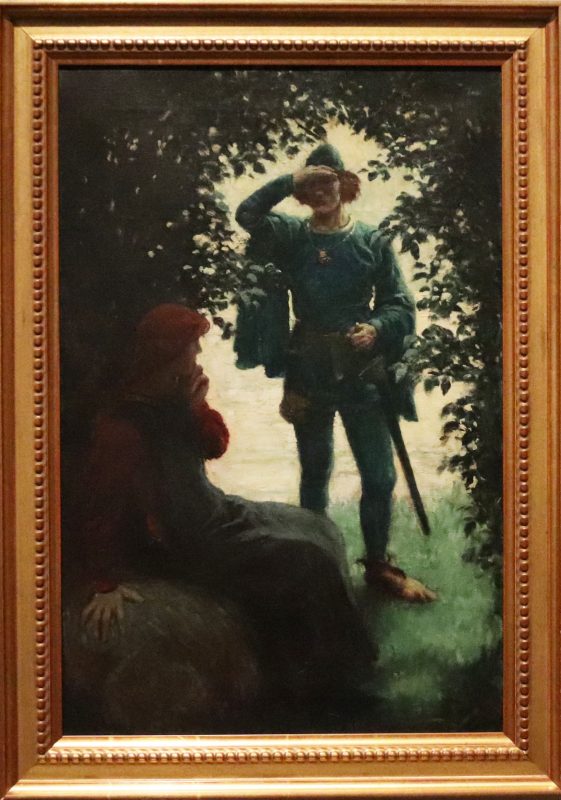 Howard Pyle was one of the most pivotal figures defining the Brandywine tradition of art from the early twentieth century - particularly famous for illustration. Pyle has an impressive legacy as a teacher from his work at the Drexel Institute of Art, Science and Industry, in Philadelphia, at his own school in Wilmington, Delaware, and elsewhere. His pupils include several artists in this exhibition.

The title of this painting was the caption to an illustration for the story “Ysobel de Corveaux” by Brian Hooker, published in Harper’s Monthly Magazine in August of 1910.

In his imagery, Pyle makes an attempt at close visual faithfulness to the written description of the Faery Prince’s first introduction to the character Ysobel:

“A breeze broke, and a small cloud covered the moon. And as it passed, there stood the very Prince before the bower, golden-haired against the golden mist. He was clad all in green, after the manner of a Faery, with a great sword by his side; and he held a hand above his eyes, looking in upon her.” 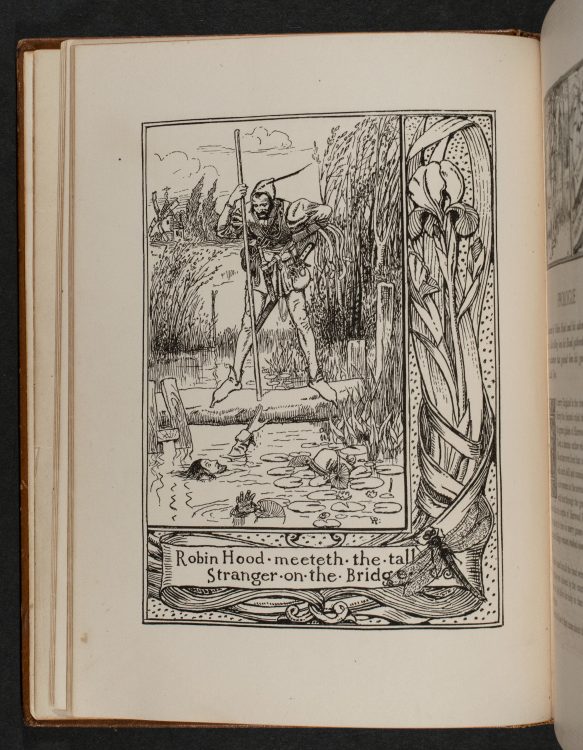 Author and illustrator: Howard Pyle (American, 1853 - 1911)
Robin Hood meeteth the tall Stranger on the Bridge and [Illustrations for Prologue]
wood engraving on paper 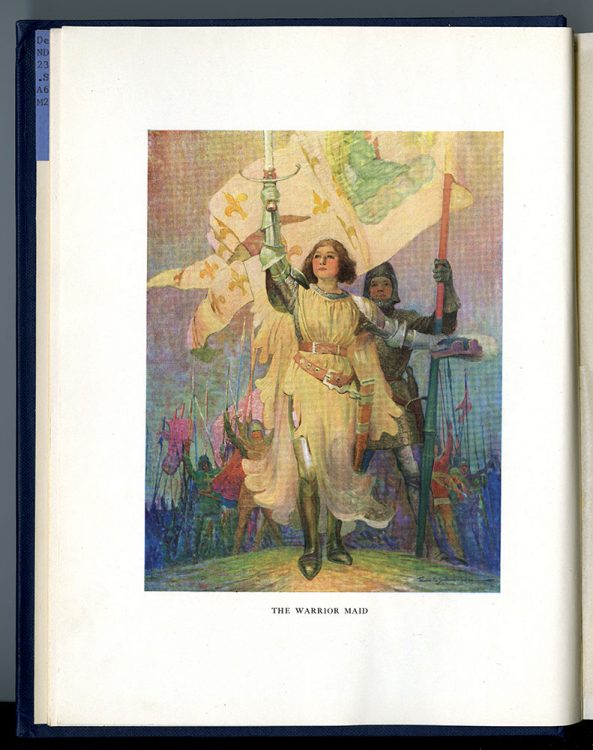 Lucy Foster Madison was a popular novelist and short story writer. Many of her works have medieval or other historical settings. This helps to explain her collaboration with Frank Schoonover, one of Howard Pyle’s best known students. Foster’s version of the life of the French medieval heroine Joan of Arc was translated into French at the request of the Historical Society of France. 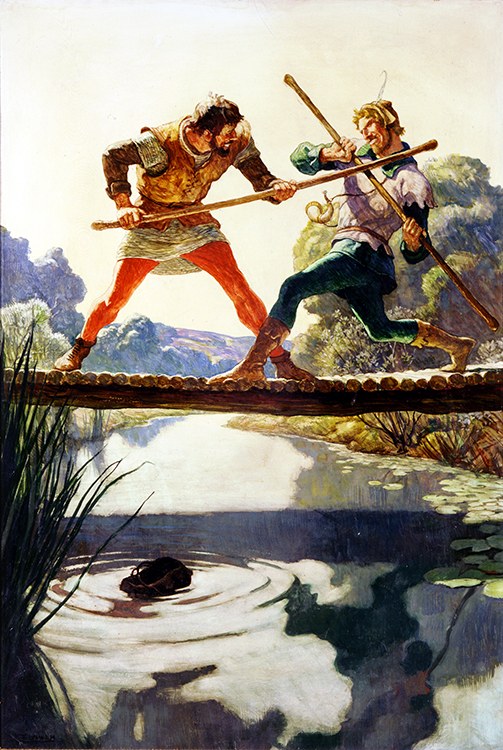 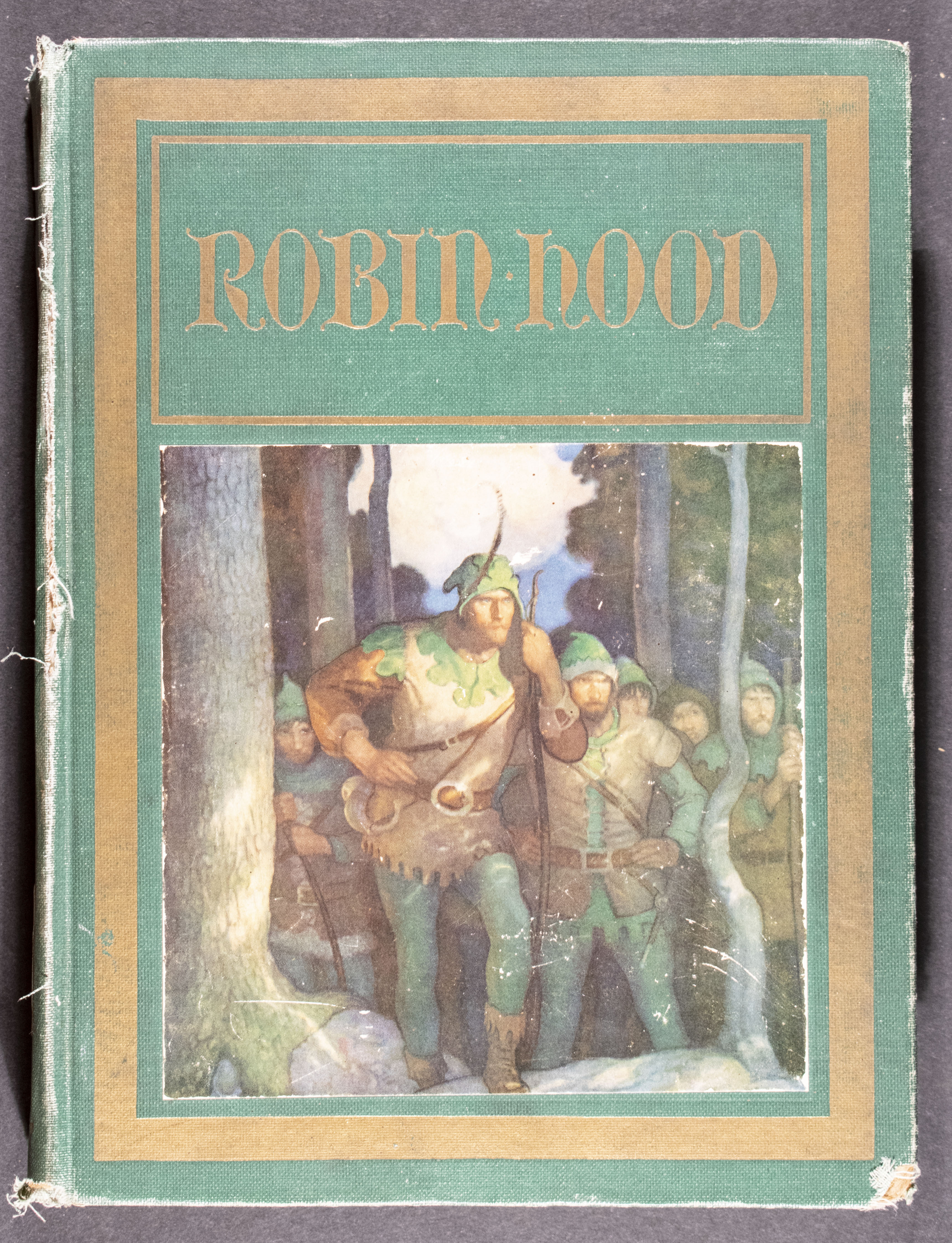 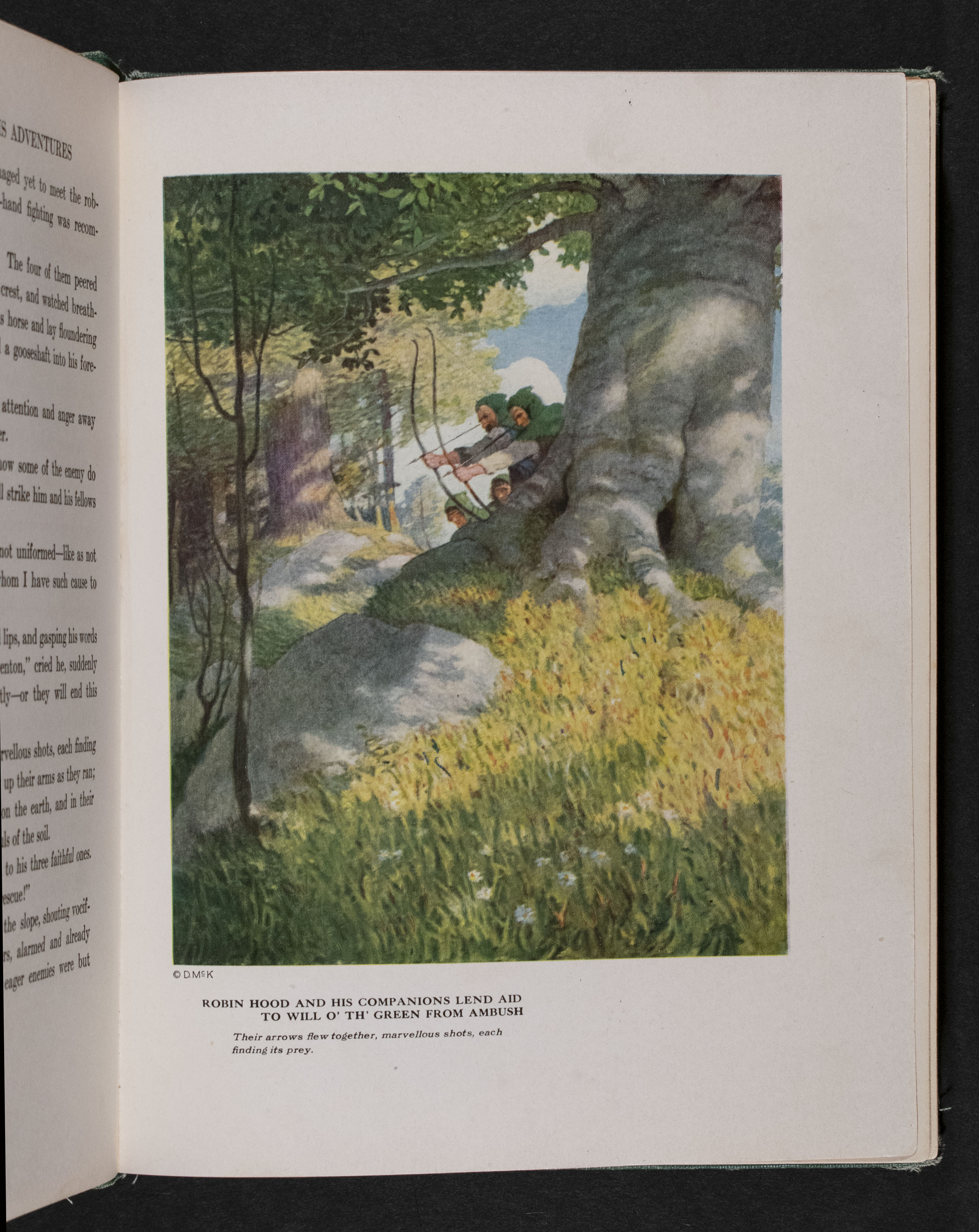 Artist and illustrator: N.C. Wyeth (American, 1882 – 1945)
Robin Hood and his Companions Lend Aid to Will o’the Green from Ambush
color lithograph on paper 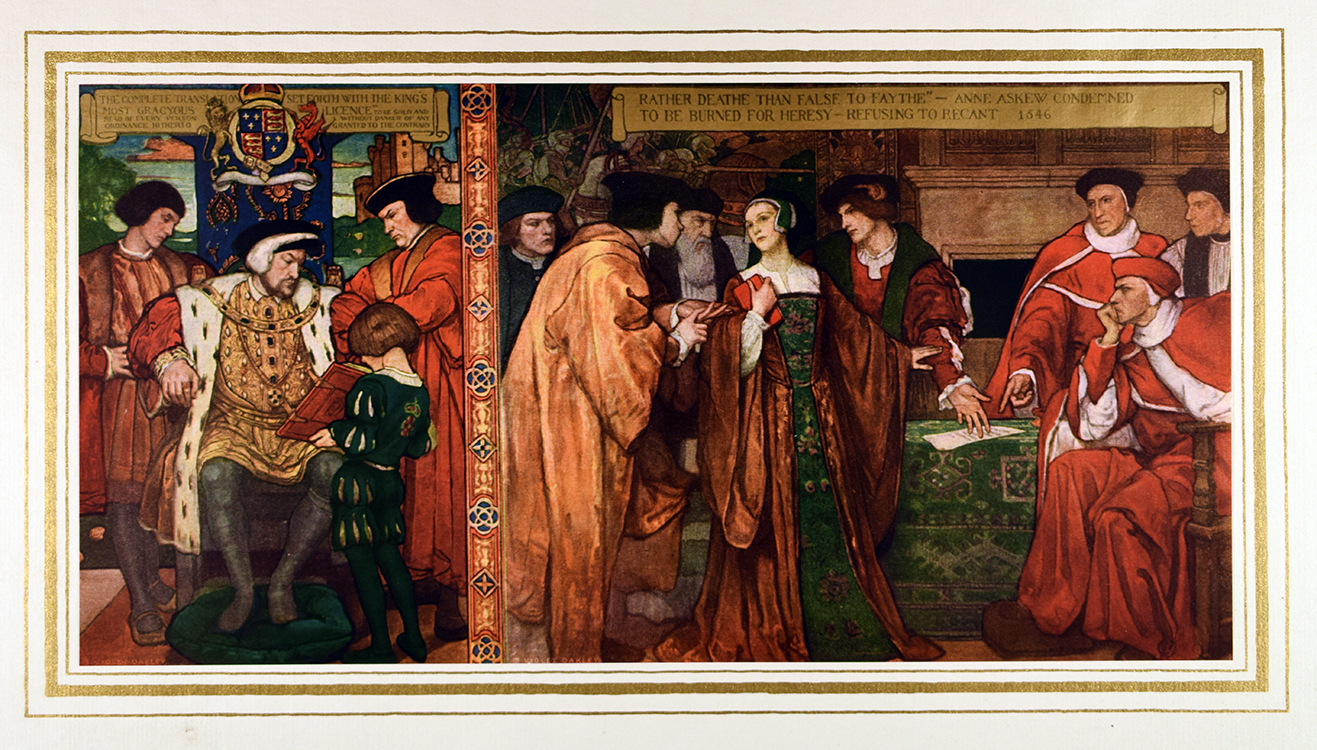 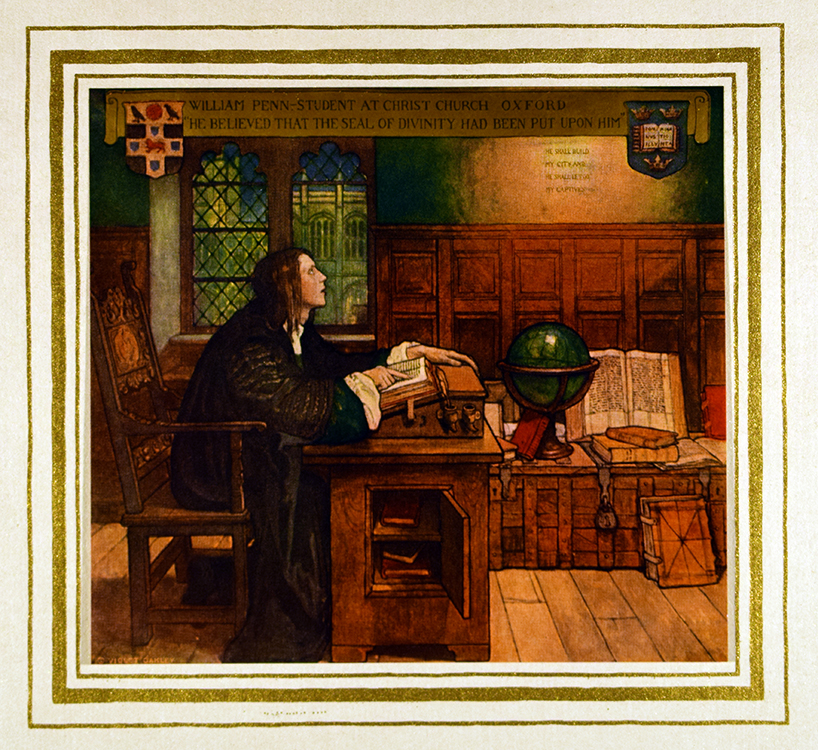 Violet Oakley’s artistic career was multifaceted, including work as a book illustrator, muralist, and stained-glass window artist. These two portfolio sheets with illustrated plates are from a book project that connects two aspects of her career. Oakley’s grandest and most enduring project was her 1902 commission to create murals for the Governor’s rooms, Senate chamber, and Supreme Court in the state capitol of Harrisburg, Pennsylvania. It was a landmark public commission for a woman artist at the time. She unveiled the first thirteen murals for the Governor’s rooms in 1906; she next worked on the Senate murals (finished 1917), and turned to the Supreme Court last. The whole project was completed in 1927 with a total of forty-three murals. These plates accompanied a special edition book, overseen and self-published by Oakley, that documents and celebrates the murals as of 1922. The monumental volume was bound elaborately in leather with metal clasps and gold designs. Printed on Italian handmade paper, the text printed in red, blue and black ink came from manuscript calligraphy by Oakley.