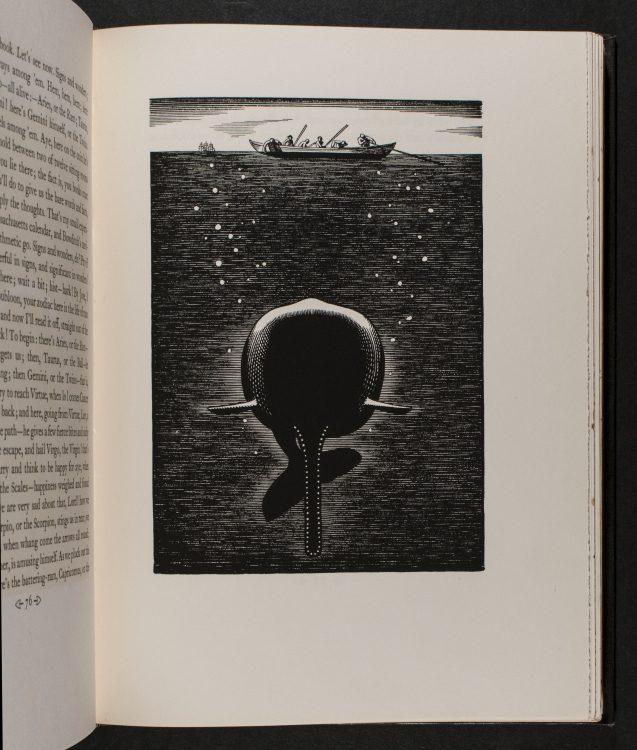 Rockwell Kent was one of the most respected illustrators of the twentieth century. He is particularly renowned for his wood engravings, although he also produced many woodcut and lithographic book illustrations. His work expressed aspects of his own experience, which included voyages to far-flung corners of the earth in search of inspiration.

One of Kent’s most celebrated books is the 1930 edition of Moby Dick, which he both designed and illustrated. The 280 woodcut illustrations were inspired in part by Kent’s own sea voyages to Newfoundland, Tierra Del Fuego in Argentina, and elsewhere. Kent’s version is the most famous illustrated edition of Herman Melville’s 1851 novel.

This is the first edition of the first book published by Random House, which rose to prominence in the first decades of the twentieth century. Kent also designed the publisher’s famous trademark. This fine press edition is famous for the harmony between binding, paper, type, and Kent’s illustrations. The elegance of these features sits in contrast to the violence found in Voltaire’s famous novel, a reflection on the calamities that punctuate human existence. Some of that violence can be seen in the many woodcuts Kent created for the volume, and which are found throughout the book. At other times the images are humorous, sad or gracefully charming. 1470 copies of the edition were printed, all signed by Kent.

A version of this wood engraving appeared in Rockwell Kent’s book N by E. It describes the artist’s travels to Greenland, which included a shipwreck.