From its invention, printing has been fundamental to the spread of scientific information and ideas connected to social debates, even helping to foment political revolutions. By appealing to the eye and the emotions, illustration, hand in hand with text, has served as a powerful tool of persuasion. This section highlights contemporary illustrated books that offer social commentary and critique. The illustrators seen here are renowned artists and the books were produced as limited edition, fine press collaborations. Under these circumstances, republishing a socially oriented document can be seen as a sign of cultural acceptance. At the same time, the artists’ skill and passion for the subject enhance the power of the text. The work of these illustrators can be seen as extensions and components of their identities as socially and politically engaged artists.

This print was produced in conjunction with a children’s book written and illustrated by Faith Ringgold, a celebrated African American artist. The book bears the same title as the print seen here, and tells the story of Henry Ossawa Tanner, one of the most important African American painters of the late nineteenth and early twentieth centuries. Tanner studied at the Pennsylvania Academy of Fine Arts and, later, moved to France and exhibited his paintings at the Paris Salon. This print shows him at thirteen years old in Philadelphia’s Fairmount Park, observing a painter for the first time. This encounter planted the seed for his future career. The text that encircles the scene recounts events leading from that moment to the time when Tanner would become an internationally celebrated artist.

Phoebe Beasley (American, b. 1943)
Mother to Son, 1998
From Sunrise is Coming After While, Langston Hughes
color silkscreen on paper
Museums Collections, Gift of Paul R. Jones

This print is from a set of silkscreens made to accompany a book published by The Limited Editions Club. For the book, writer Maya Angelou (1928 - 1914) was asked to choose eight poems by celebrated poet Langston Hughes (1902 - 1967). In addition, artist Phoebe Beasley created six silkscreen prints as illustrations. The silkscreens were also released as a separate set. The print seen here bears the title of one of Hughes’ best-loved poems, “Mother to Son,” published in 1925 in his collection The Weary Blues. In the poem a mother recounts how she has maintained her optimism in the face of life’s hardships (“Life for me ain’t been no crystal stair…”). By presenting a woman taking part in a political demonstration, Beasley’s print evokes a dimension that is not explicit in Hughes’ poem.

These are the first and last of the six lithographs that Elizabeth Catlett made to illustrate Margaret Walker’s 1937 poem “For My People.” In 1992, the Limited Editions Club produced a special volume with Catlett’s illustrations to celebrate the fiftieth anniversary of the publication of Walker’s anthology also titled For My People.

Singing Their Songs alludes to the first two powerful lines of the poem.

“For my people everywhere
singing their slave songs repeatedly;
...”

And, A Second Generation references lines from the last stanza of the poem.

“Let new earth rise,
Let another world be born.
Let a bloody peace
be written in the sky.
Let a second generation
full of courage issue forth; ...” 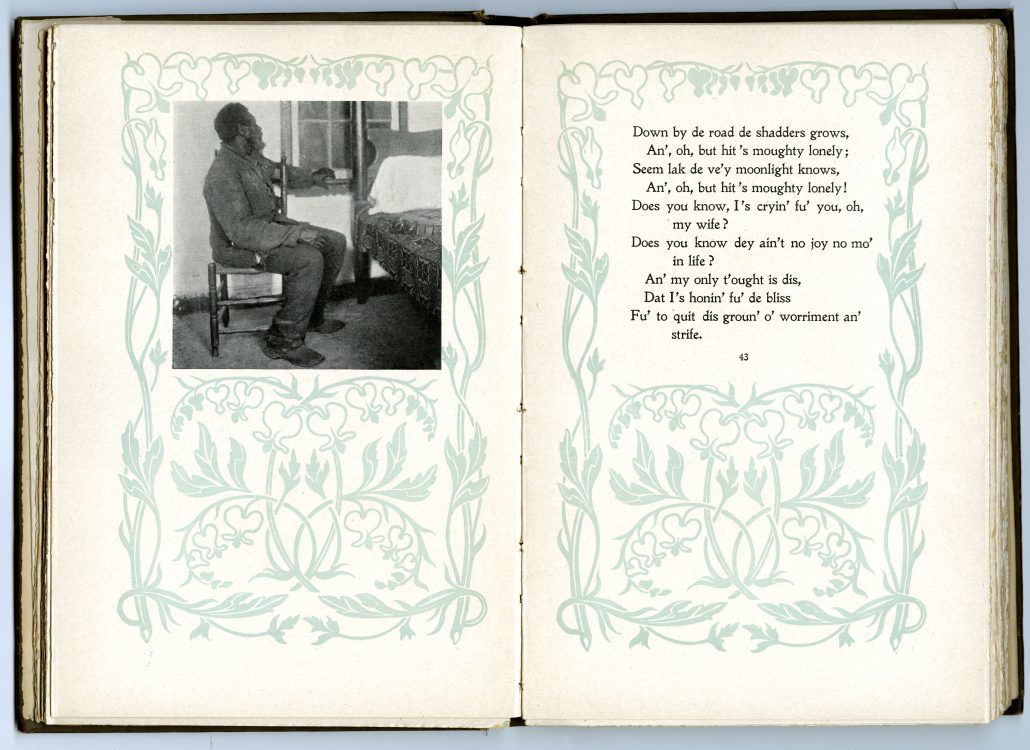 When Malindy Sings is one of a series of six books of Dunbar’s poetry illustrated by the Hampton Institute Camera Club. Dunbar is often associated with his dialect poetry, which employed an artificial linguistic style to represent the speech and lives of rural African Americans. The title poem of the volume praises the moving and melodious singing of Malindy, an African American female servant, by humorous contrast with the earnest efforts of “Miss Lucy,” a white child studying piano in the same household. The Hampton Institute Camera Club was made up mostly of white Northerners on the faculty of Hampton Institute, an African American institution of higher learning. 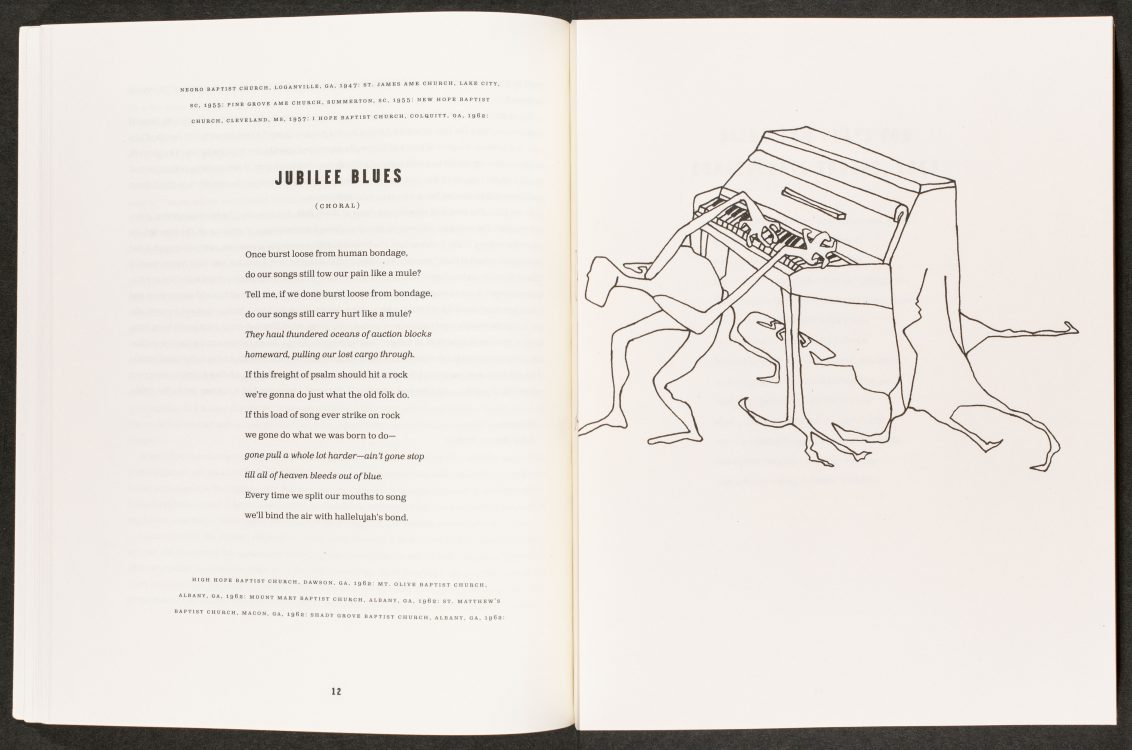 In minstrel shows of the nineteenth and twentieth centuries, Americans absorbed racist caricatures as a form of entertainment. Performers in blackface played the parts. “Olio,” the title of this Pulitzer prize-winning volume, refers to the middle part of the shows, when singers and other side performers took the stage. In poems, letters, newspaper articles and other types of texts, Jess’s book imagines the lives of important African American artists and performers such as Scott Joplin, Siserietta Jones, Paul Laurence Dunbar and others. All the performers given voice in Olio performed during both during and after the slave era. The author has remarked that his book is meant to present African American characters in place of caricatures. 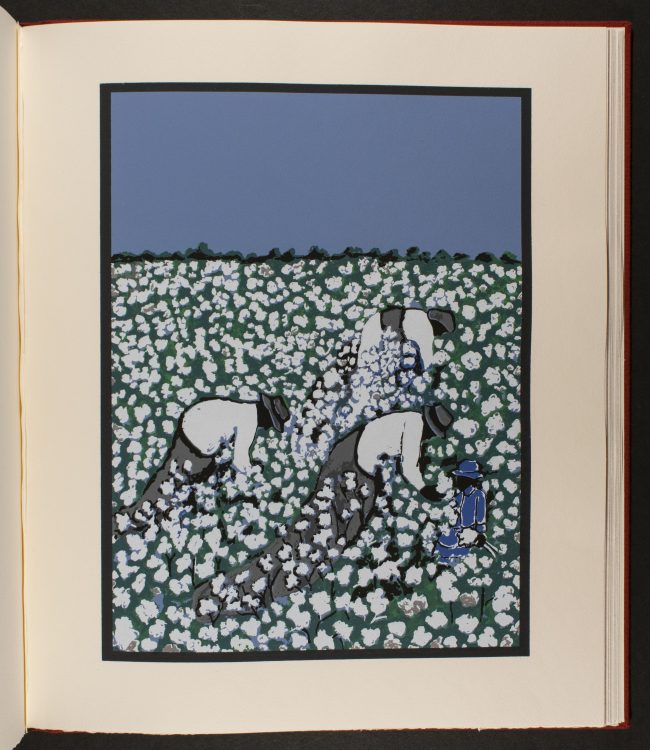 Martin Luther King’s famous letter was written during the most intense period of civil rights protest in the South. It is illustrated with a series of eight prints by renowned artist Faith Ringgold. The images depict key moments from the Civil Rights Movement. Each one fills an entire page, with no text appearing on the facing page. Thus, the image creates an autonomous experience for the viewer, while still supporting the text. 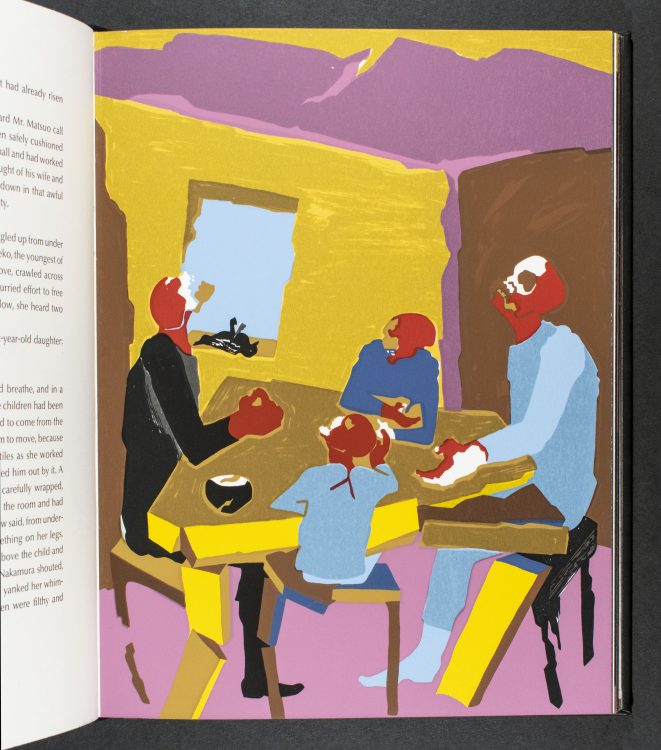