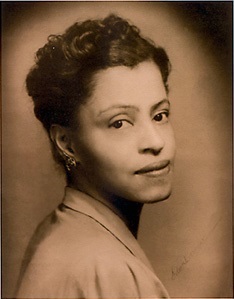 Pauline Alice Young (1900-1991) held many titles throughout her lifetime. She was a librarian, a teacher, an activist, a historian, a traveller, and a writer--often all at once. In all of her endeavors, she remained dedicated to two lifelong passions: championing civil rights and spreading awareness of African American history.

Having been born at the dawn of the twentieth century into a civically-engaged family, Young had a head start when it came to her involvement in civil rights activism as it gained national attention and momentum over the ensuing decades. She had several personal connections to the organizations and activists laying the groundwork for the major victories of the 1950s and 1960s, joining their ranks at a young age to lend her own energy to the ongoing struggle.

As a longtime resident of Wilmington, Delaware, Young was a pillar of the Black community in the city, educating and mentoring several generations of young people. She was especially known for being a key resource for Black history, as she collected and preserved all kinds of material on the topic, sharing that information with her community at every possible opportunity.

She travelled widely, both domestically and internationally, taking every opportunity to see for herself what others only read about. She drew on those accumulated experiences in educating others and criticizing societal conditions closer to home.

This exhibition is dedicated to a woman who fought for recognition of the rights and history of her people, who acted on her spirit of adventure while remaining committed to the community where she grew up, and who refused to let society's expectations dictate her actions.