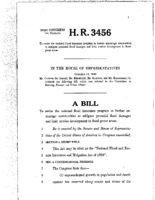 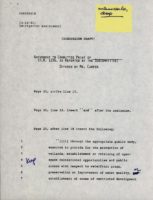 The House Banking, Finance and Urban Affairs Committee (now the House Committee on Financial Services) was established in 1865 to relieve the House Ways and Means Committee of some of its workload, including oversight of national banks, public credit, deposit of public moneys, and issuing silver certificates.[1] Later, the committee’s jurisdiction expanded to include oversight over the insurance industry, public and private housing, and urban development.[2]

One piece of insurance legislation that loomed large during Rep. Carper’s time in the House was fixes to the national flood insurance program. Especially during the 101st Congress (1989-1991) and the 102nd Congress (1991-1993), Rep. Carper and the members of his committee worked to modernize the National Flood Insurance Program, protect against costal erosion, and add protections for water quality and costal wildlife habitats.

During the 101st Congress, Rep. Carper introduced a bill, H.R. 3456, the National Flood and Erosion Insurance and Mitigation Act of 1989. This bill, unfortunately, “died in committee,” and was never voted on by the entire House of Representatives. In the following Congress, Rep. Ben Erdreich introduced H.R. 1236, the National Flood Insurance, Mitigation, and Erosion Management Act of 1991. Rep. Carper offered up numerous amendments to strengthen the bill. This second bill, H.R. 1236, passed the House with a vote of 388-18.