The Joint Committee on Defense Production 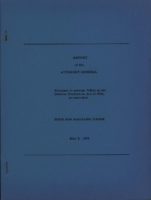 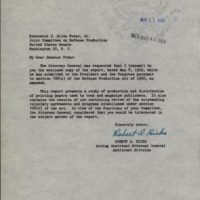 United States Department of Justice, excerpt from report of the Attorney General, Pursuant to section 708(e) of the Defense Production Act of 1950, as amended, Book and Magazine Paper, 1959 May 8
View Metadata 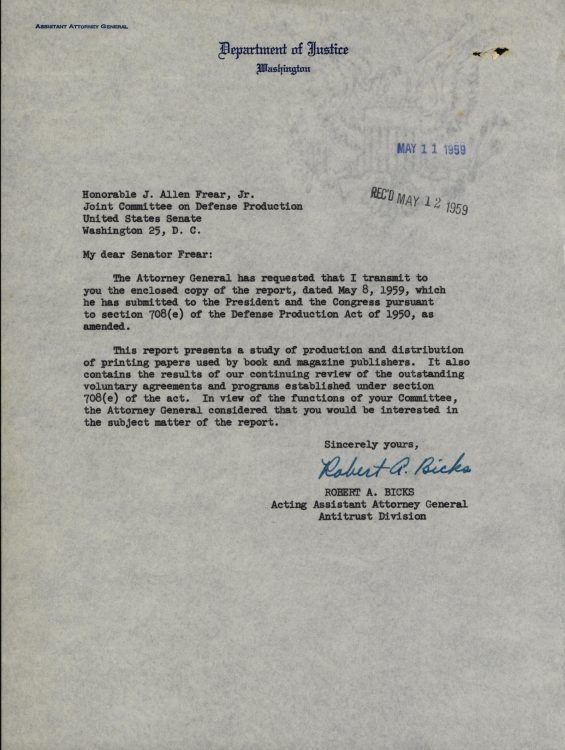 Robert A. Bicks, letter to Senator Frear, transmitting a Department of Justice report on Book and Magazine Paper manufacturing, 1959 May 11
View Metadata

During the Korean War, rising wages and prices were putting pressure on the US economy. In response, Congress passed the Defense Production Act of 1950 (P.L. 81-774) authorizing various government activities, including requisitioning property for defense, wage and price stabilization, expanding productive capacity, and establishing government contract priorities. The Act established the Joint Committee on Defense Production to serve as a watchdog over different government agencies and programs. Membership of this committee was drawn from the House and Senate Committees on Banking and Currency, allowing Senator Frear the opportunity to participate on this panel. [1]

The Defense Production Committee was primarily investigative in nature, regularly reviewing reports and surveys identifying trends in manufacturing or resource acquisition which stifled economic competition, hurt small business or otherwise hurt the overall economy of any industry with national security implications. One such study undertaken by the Department of Justice was to study the production and distribution of printing paper used to create books and magazines.

For Senator Frear, papermaking was not only an issue of national security, but a local issue as well. Papermaking in Delaware, especially along the Brandywine River, dates back to 1787 with the establishment of the Gilpin Paper Mill, north of Wilmington. Over 150 years later, the Curtis Paper Mill (also known as the Nonantum Mill) in Newark manufactured the paper used to make the Instrument of Surrender which officially ended World War II.