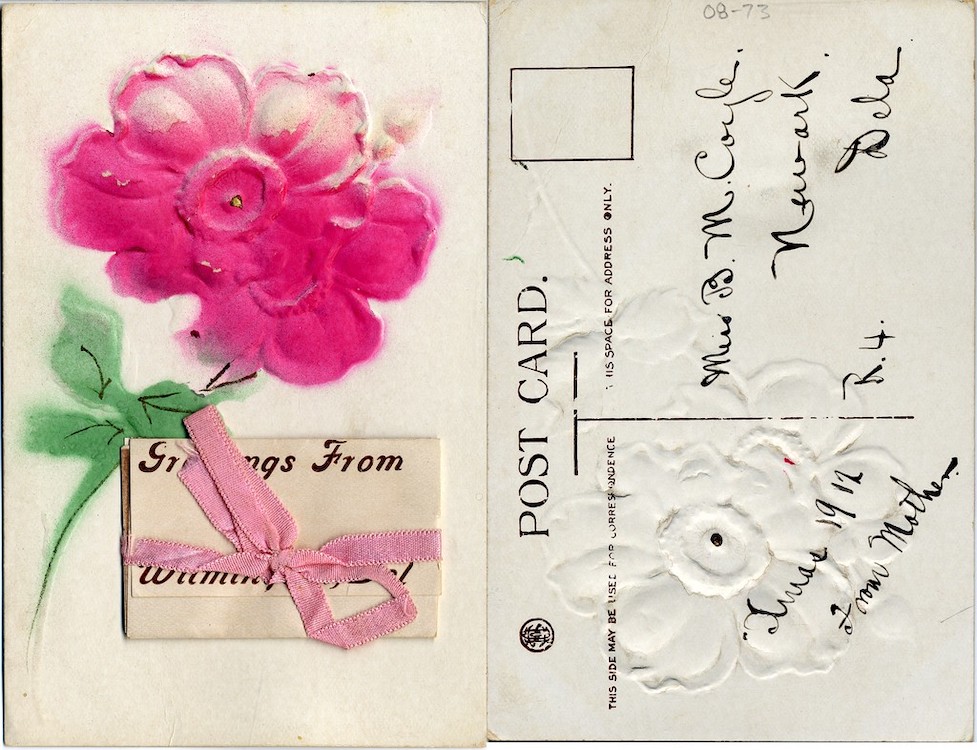 In 1907, the United States decreed that the backs of postcards could be divided in half, with messages on the left side and postage and addresses on the right side, the same format that we use today. The main benefit of this format was that images could now take up the entire front of the card, and they often did. During this period, postcards were incredibly popular. In 1908, a Michigan salesman invented the revolving postcard rack so that customers could more easily peruse and select them, and publishing companies like Curt Teich Co. began to dominate the market for view and advertising postcards. By 1915, however, public demand for postcards diminished. New government regulations and tariffs, a reduction in postcard quality, and a shortage of printing ink from Germany during World War One were all contributing factors. As French folded greeting cards began to replace postcards in popularity, postcard publishers began to focus more specifically on view cards for tourists. 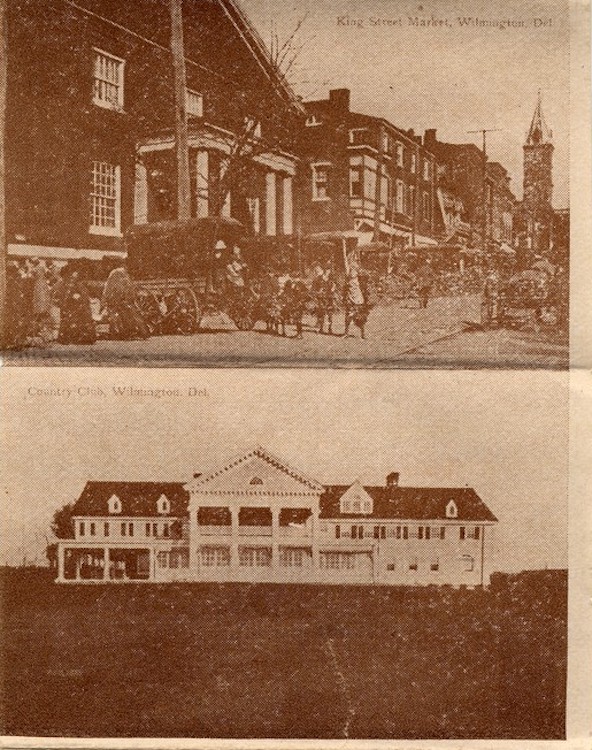 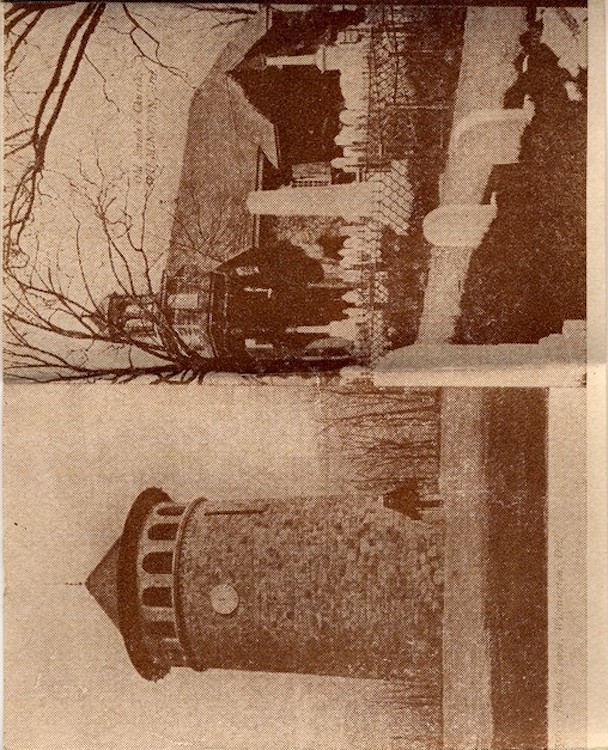 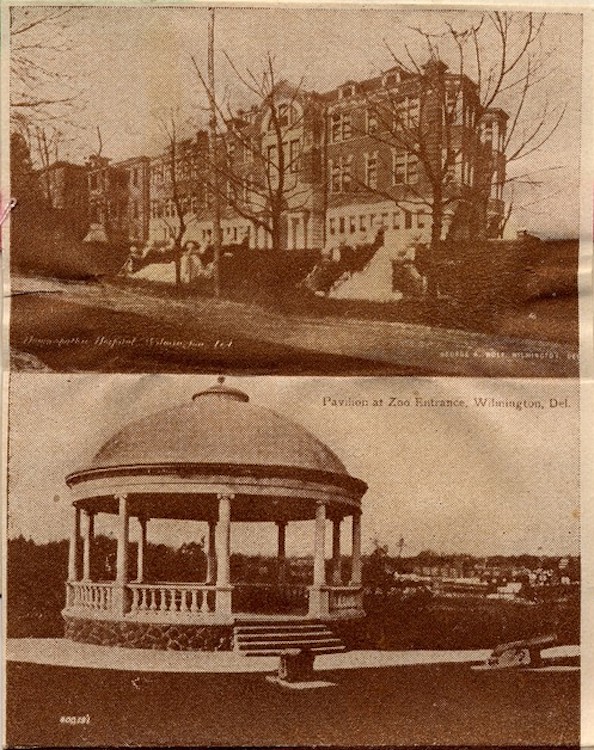 This unusual handmade postcard features accordion-folded images of Wilmington, all secured by a bow. 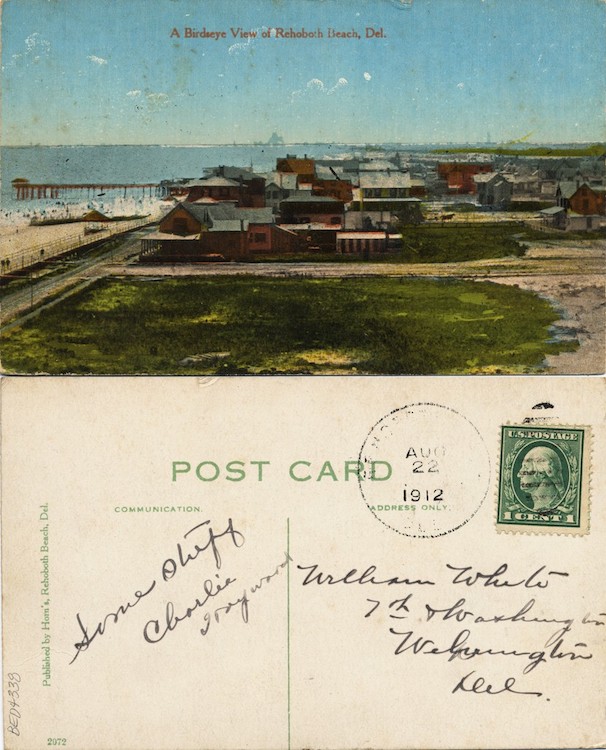 This postcard of Rehoboth Beach is an example of a bird's-eye-view, a view that has persisted throughout the history of postcards. It also demonstrates the early use of color in postcards, when publishers often chose colors sparingly to lower costs. 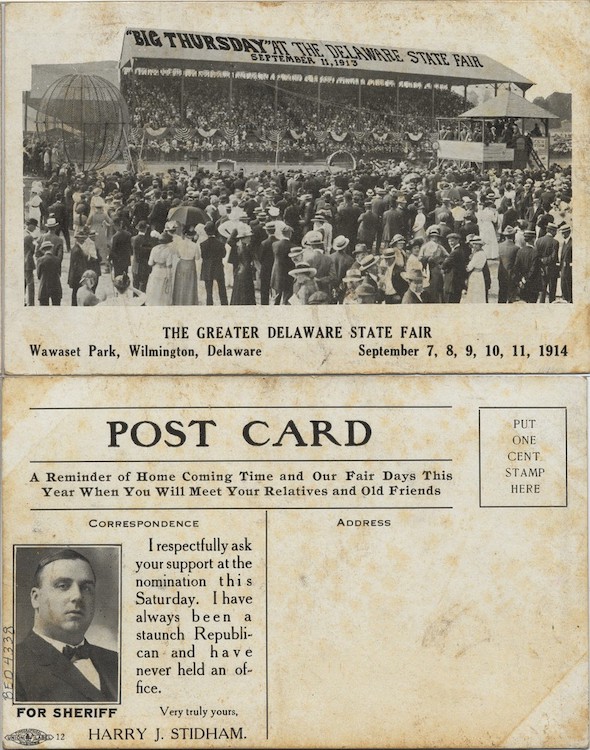 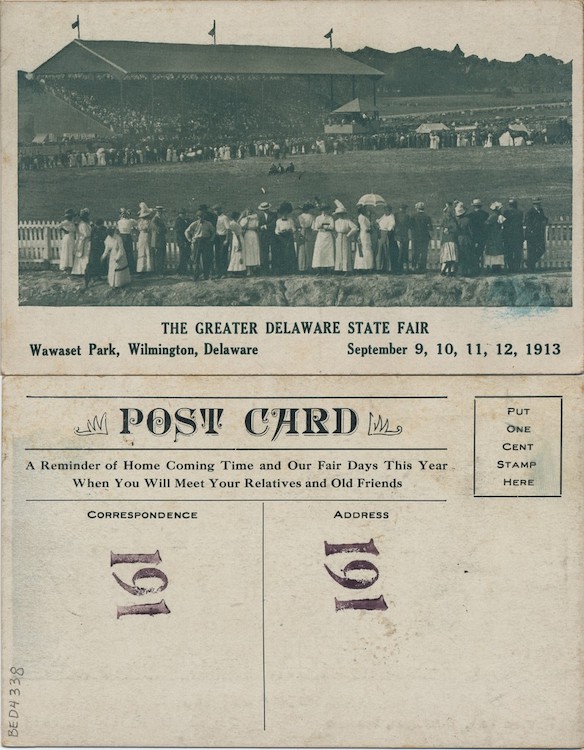 These postcards serve as souvenirs from the 1913 and 1914 Greater Delaware State Fairs, an event that dates back to the mid-nineteenth century. The message side of the postcard on the right features pre-printed text and a portrait of county sheriff hopeful Harry J. Stidham, illustrating how postcards could be used for advertising campaigns. Stidham was elected sheriff of New Castle County the following year. 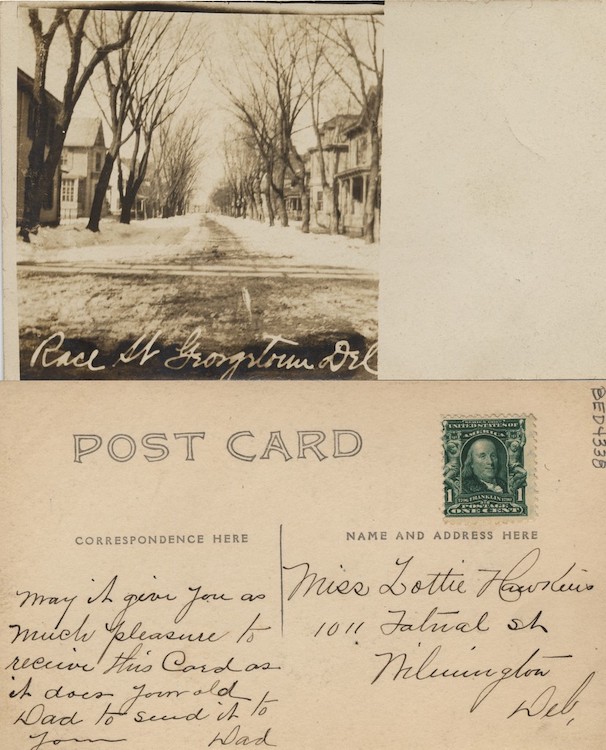 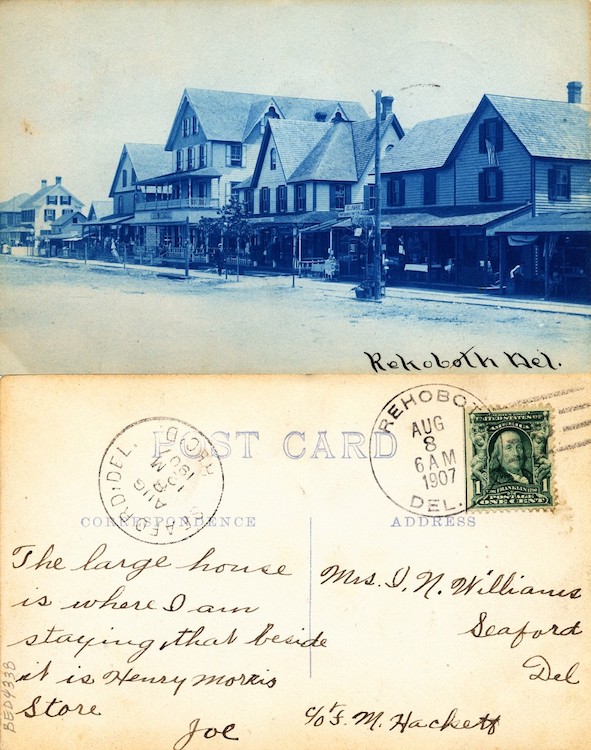 These real photo postcards are examples of two different types of photographs: gelatin silver prints and cyanotypes. The postcard on the left is more typical of real photo postcards, with a black and white image created through the chemical reaction of silver. The photographer would have written the caption on the negative before printing the positive image on the postcard. The postcard on the right was created through the chemical reaction of iron, giving it its signature blue color. 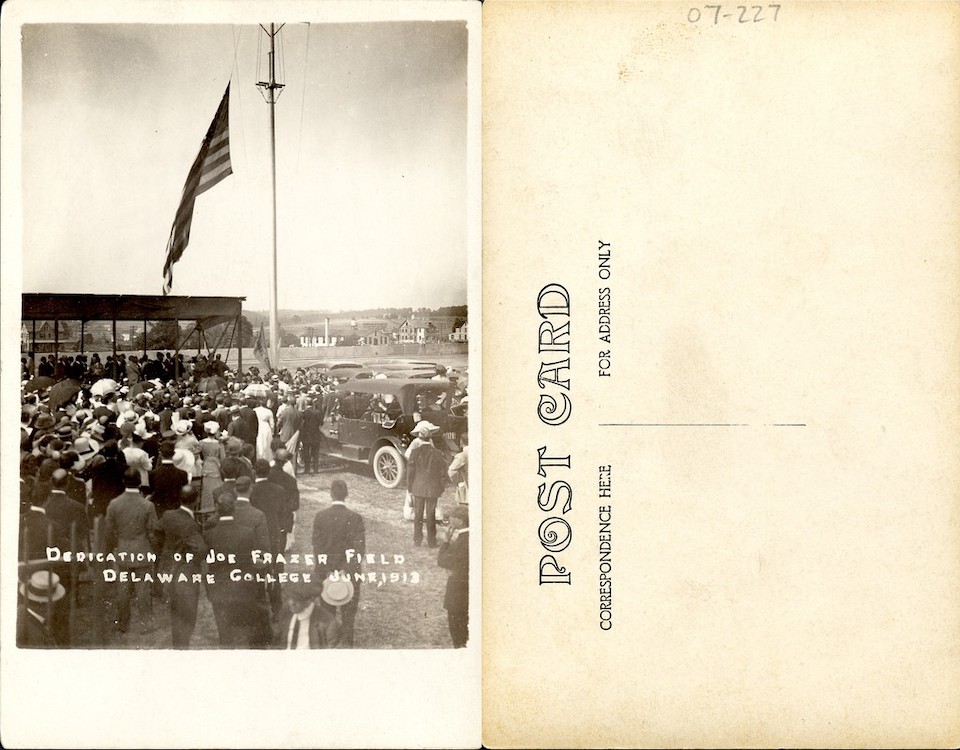 This postcard commemorates the dedication of the Joe Frazer Field, an exciting community event. An article in Wilmington's The Evening Journal recounts that over two thousand people were present at the event and calls the field "the greatest boom in [Delaware College's] history." The field was gifted by Eben B. Frazer and Stanley Frazer in memory of their son and grandson, Joseph T. Frazer, a 1903 graduate of Delaware College. At the time, The Evening Journal called it "one of the most modern and complete college athletic fields in the country." 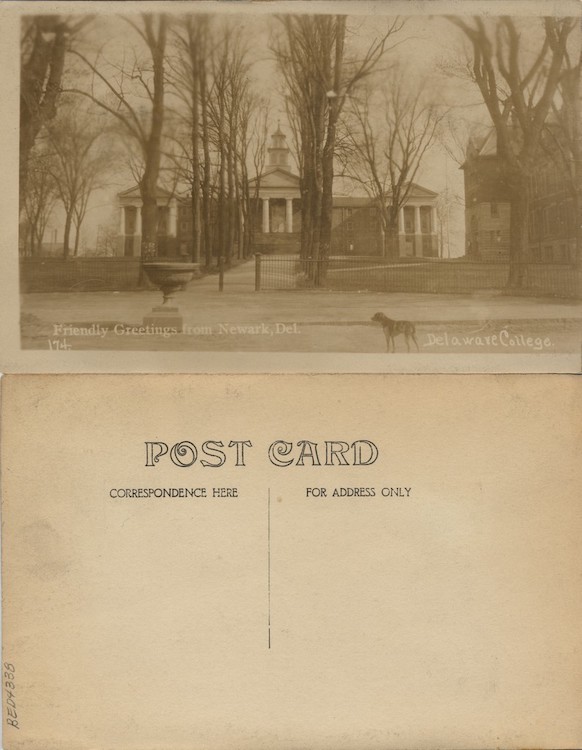 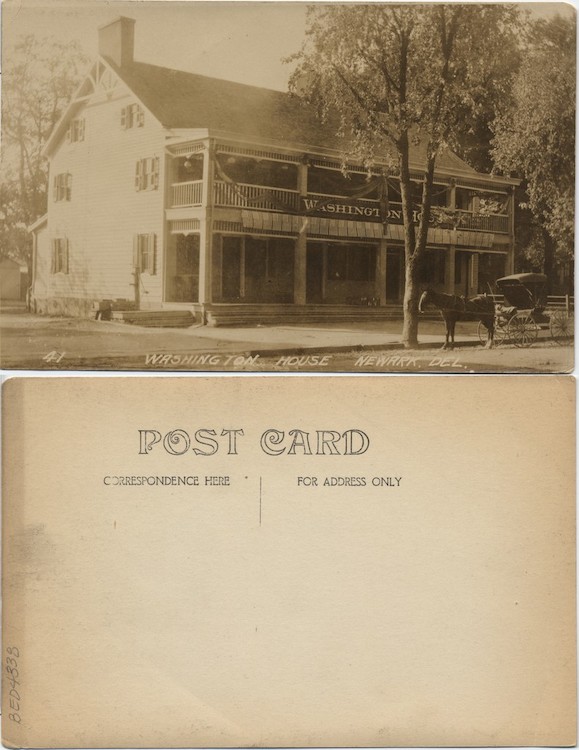 Real photo postcards from this period provide a glimpse of local life over a century ago. While some buildings, like Old College, have remained largely unchanged, others, like Washington House, have been completely transformed. Constructed in 1825, Washington House was first a hotel and was owned by Vic Willis, the only major league baseball player from Delaware to be inducted into the National Baseball Hall of Fame, from 1911 to 1947. In 1972, it became the Stone Balloon Tavern and Concert Hall and earned a place on Playboy magazine's list of "100 Top College Bars in America." The old building was razed in the mid-2000s, and today it is home to restaurants and condominiums.