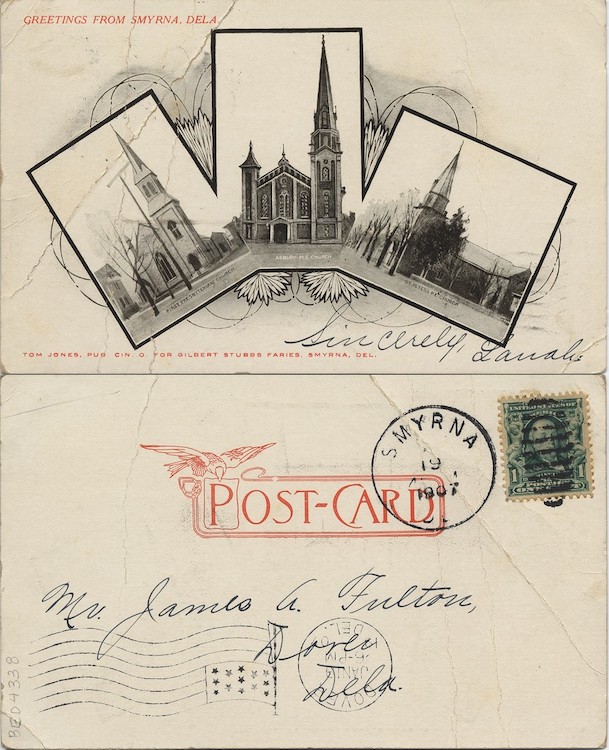 In the early years of the twentieth century, postcards became a collectible item as well as a means of correspondence. On December 24, 1901, “Post Card” replaced “Private Mailing Card” on the back of privately made postcards, designating a new period in postcard history. This period is also referred to as the “Undivided Back Period,” as the backs were still reserved for addresses alone. Senders found ways to include messages on the image side, either writing around the margins of the images or directly on top of them.

Postcard popularity in this period was aided by two factors. First, the United States Post Office's Rural Free Delivery, a service that delivered mail directly to rural inhabitants, expanded rapidly in the last years of the nineteenth century, making it easier for people across the country to receive mail. Second, the photography company Kodak began marketing products specifically for making postcards, including an inexpensive camera that made it easy to produce postcard-sized photographs. These cameras encouraged amateur and studio photographers alike to make postcards from their own pictures of local scenes and attractions. 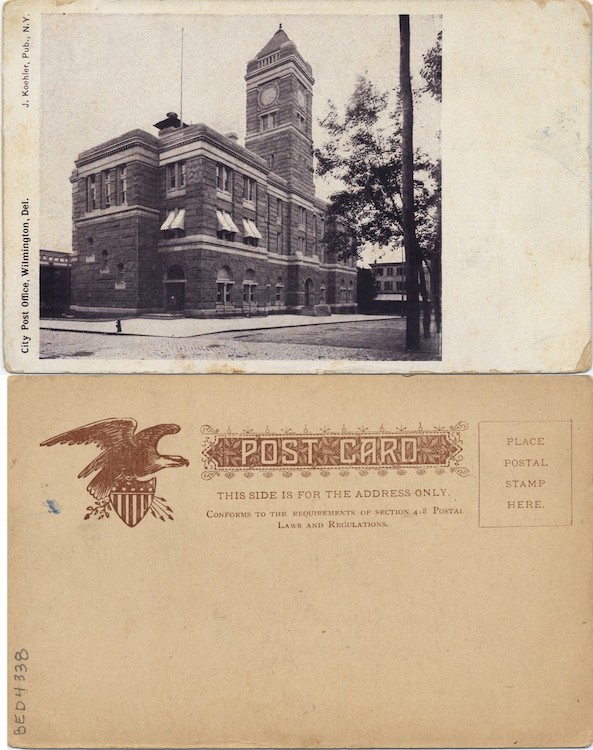 This early postcard states that it "Conforms to the requirements of Section 418 Postal Laws and Regulations" that were passed in late 1901. 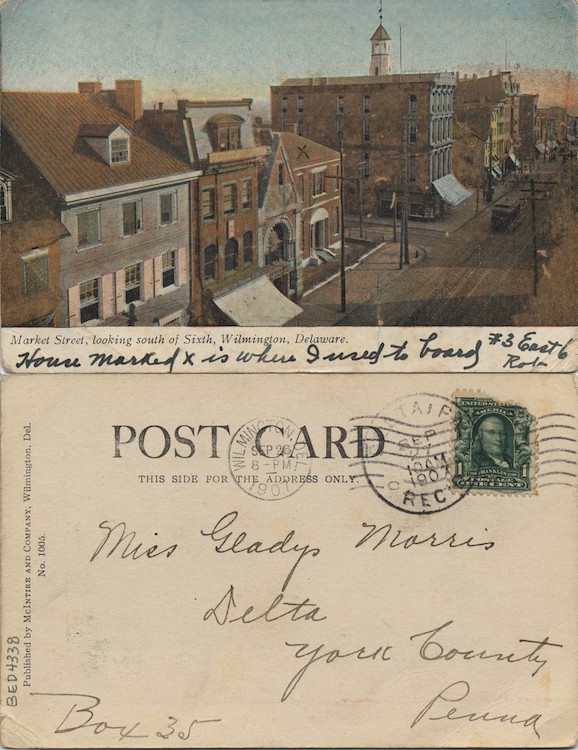 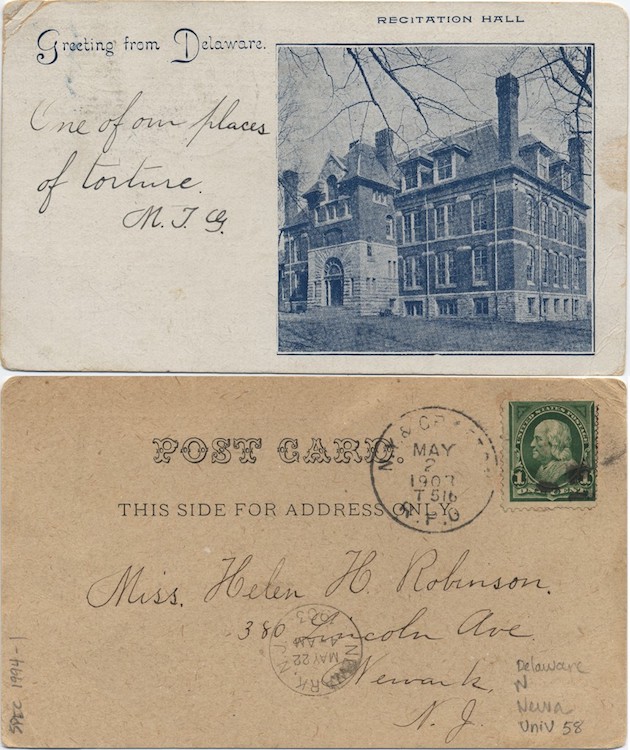 The senders of both of these postcards added short messages in the blank spaces around the images to give the receiver context. On the left, the sender wrote, "House marked X is where I used to board" and placed an X over the corresponding house on the image. On the right, the sender describes the University of Delaware's Recitation Hall as "one of our places of torture." 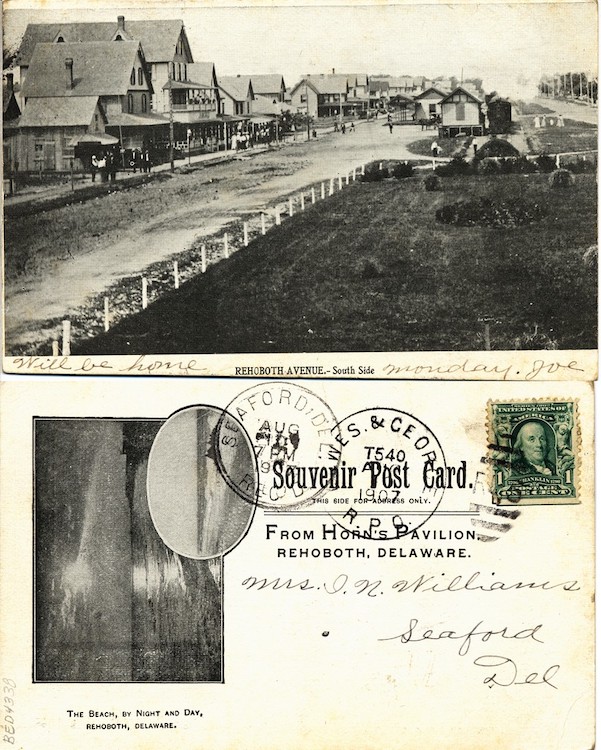 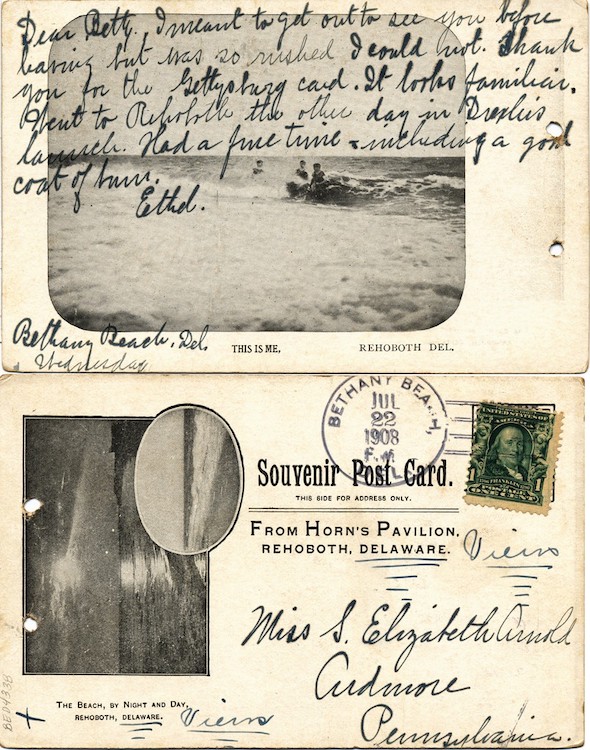 Souvenir postcards gained popularity during this period, showing a variety of scenic views. These are just two of a series of Souvenir Post Cards from Rehoboth, Delaware. 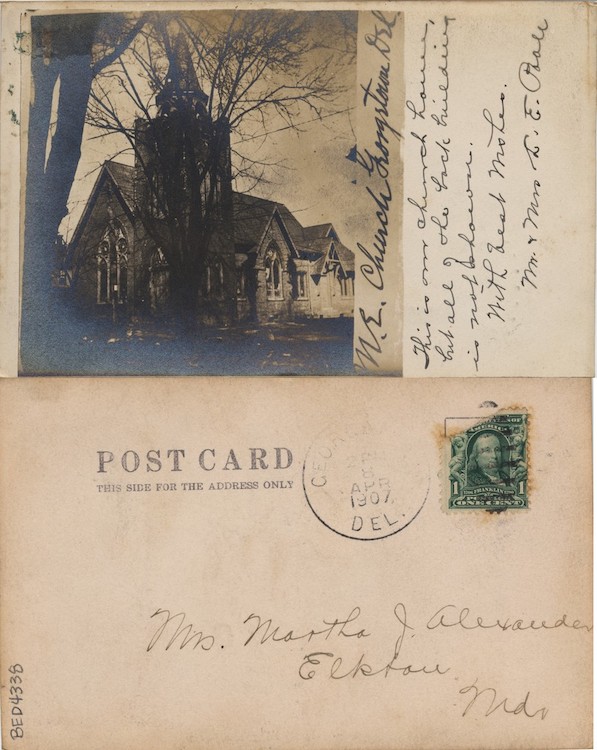 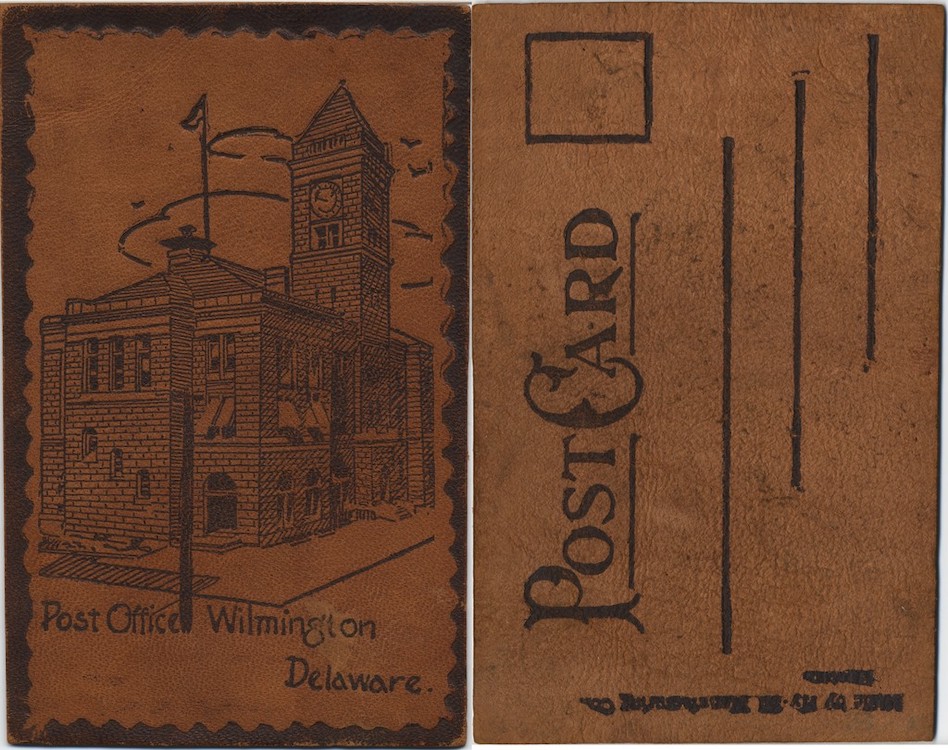 This unusual postcard is one of several leather postcards in the collection. It was made by the Hy-Sil Manufacturing Company, the oldest gift-wrap manufacturer in the United States, which began producing leather postcards in Boston, Massachusetts, in 1903. The company later switched to making traditional paper cards and sold their products to Hall Brothers, which became Hallmark in 1912. 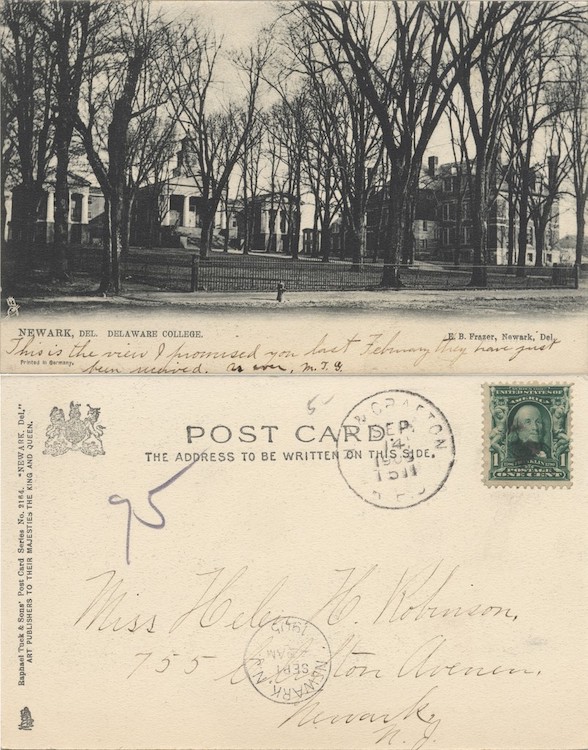 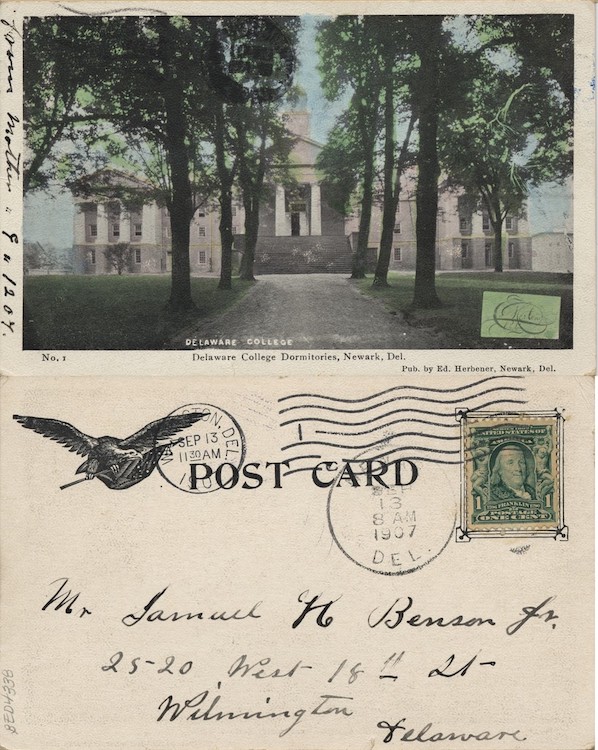 These postcards show two views of the University's first official building, Old College, which housed student dormitories at this time. The postcard on the left was published by Raphael Tuck & Sons, which began printing souvenir cards in 1894, one year after being appointed official printers to Queen Victoria. While most of the company's postcards were printed in Europe during this period, the designs often came from local artists. In this case, the photograph was likely provided by the person named on the front of the card, E. B. Frazer, which probably refers to Mr. Eben B. Frazer, a member of the University of Delaware's Board of Trustees from 1913 until his death in 1929 and Mayor of Newark from 1917 until 1929. In contrast, the postcard on the right was produced in Newark, DE by traveling photographer and postcard salesman Edward Herbener. He was known for his real photo postcards, which documented daily life in Newark and the surrounding area. In 1910, the Newark Post called Herbener "one of the pioneers in the post card business." 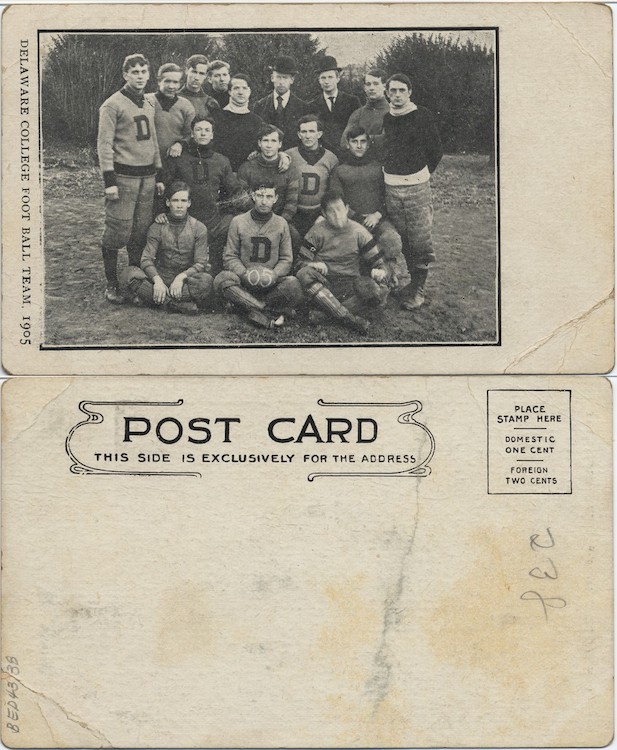 While scenic views and local attractions were common images for postcards during this period, it was not unusual for them to feature pictures of people, as well. 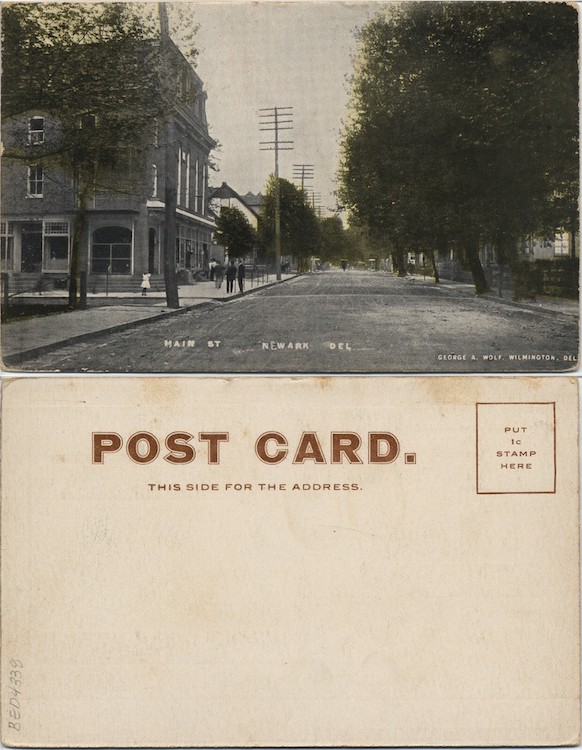 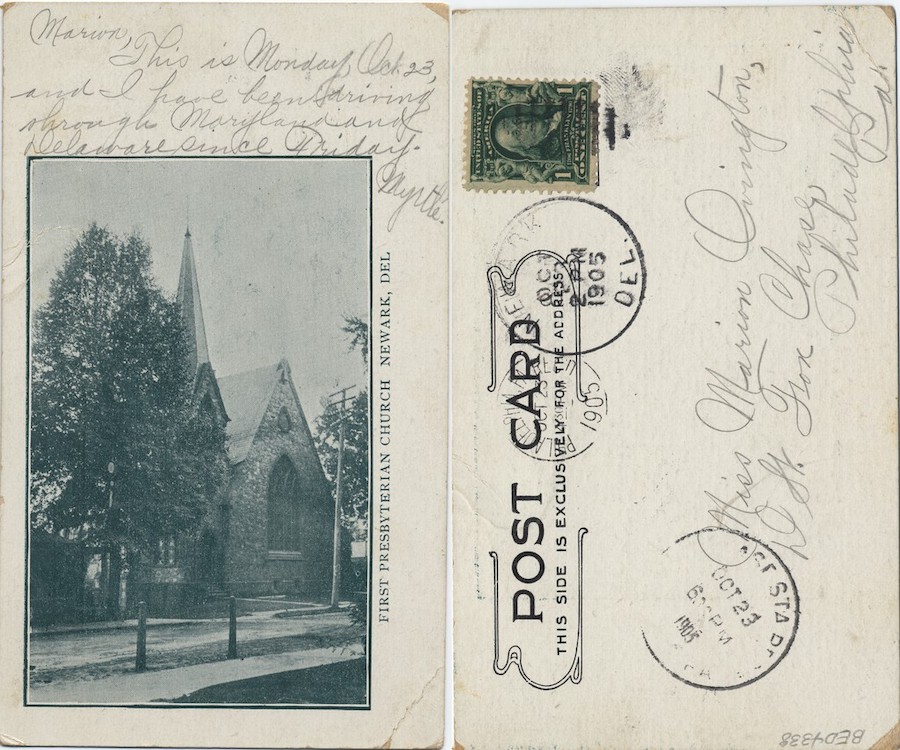 These postcards give viewers a glimpse of turn of the century Newark. The postcard on the left was published by George A. Wolf, a prolific publisher of real photo postcards, who also designed the DuPont oval logo. The postcard on the right shows the Old Stone Church, which, at the time, housed the First Presbyterian Church of Newark and is now a study lounge connected to Trabant Hall.