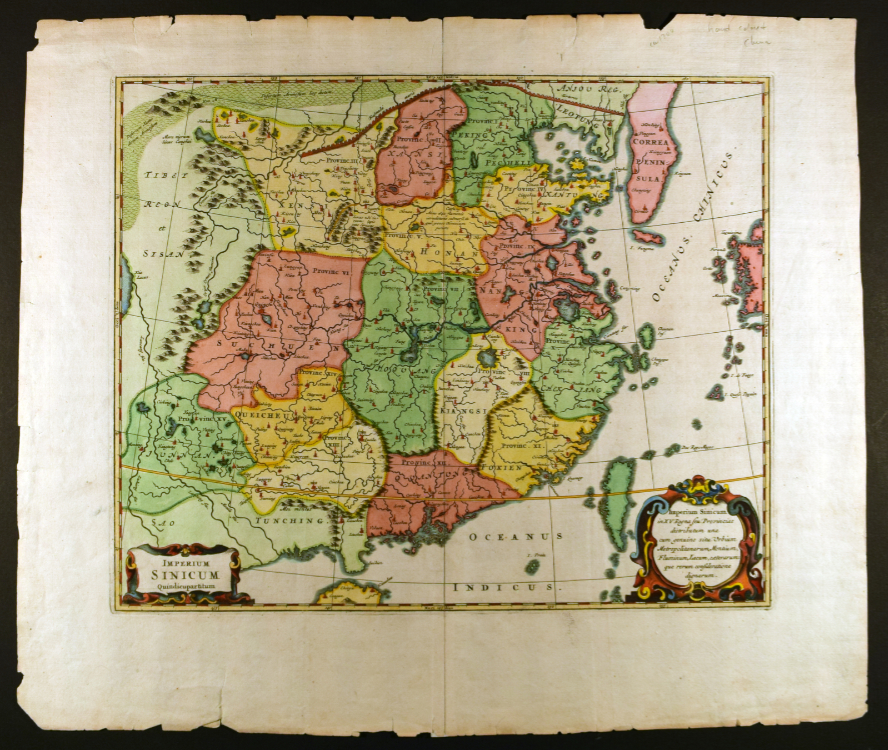 Imperium Sinicum (The Empire of China), the titular label of the map, encompasses an expansive rendering of the land’s geographic and topographic characteristics. Yellow, green, and red hues indicate different provinces. It includes thick and curved lines representing winding rivers, round orderly bumps that stand in for mountain ranges, and tiny building structures indicating towns or cities. Stretching along the top of the map, the Great Wall of China is boldly incised, dividing the Gobi Desert from the rest of the country. On the right, the peninsula of Korea stretches downward, while the landmass of Japan separates the Oceanus Chinicus (Chinese Ocean), now known as the East China Sea.

Jesuit cartographer Athanasius Kircher, striving for scientific accuracy, overlaid a geographical coordinate system on the map. The Tropic of Cancer, the longitudinal (vertical), latitudinal (horizontal) lines cut across the landmasses to provide an accurate plotting system. Despite the seemingly careful rendering of the geographical observations, Kircher never visited China. He created Imperium Sinicum entirely based on the observations of China reported to him by Jesuit missionaries, such as Father Martino Martini, a student of Kircher, who was stationed in China between 1643–1650. 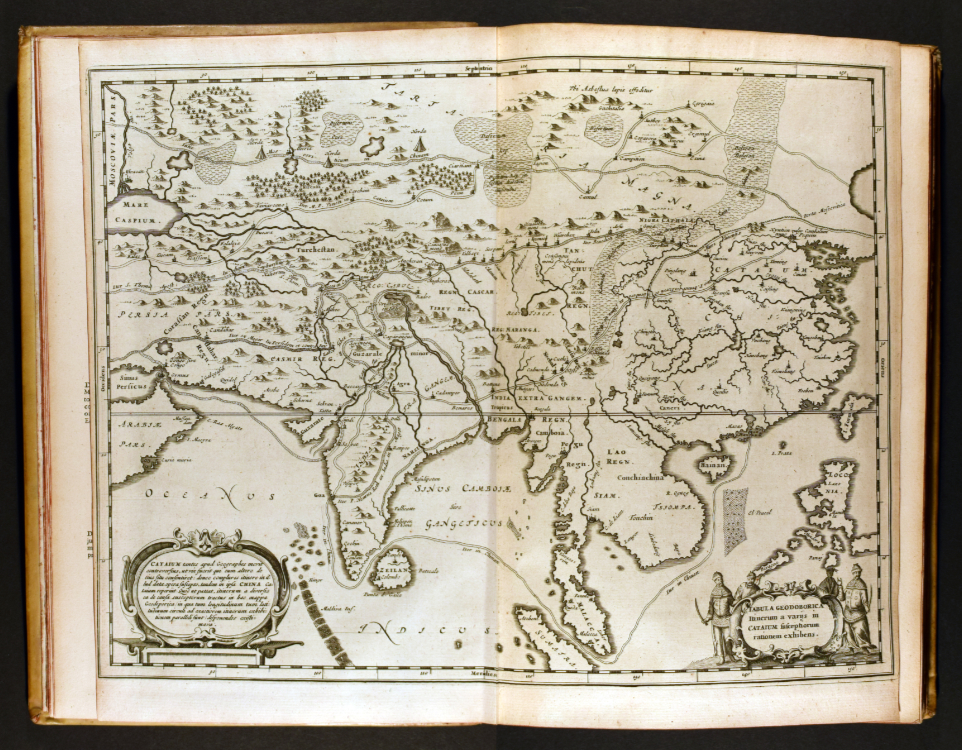 A web of entangled lines traverses Tabula Geodoborica. They mark both marine and land pathways. To distinguish the overlapping routes, Athanasius Kircher included dotted, dashed, hollow, and solid lines that span from the Middle East to China. This is one of the first images encountered when flipping through China Illustrata, a volume that comprises an encyclopedic study on China and the Far East pieced together from missionary accounts. It is coupled with information on botany, geography, religion, and zoology. Close observation reveals that this map was most likely intended for entertainment purposes rather than for actual travel use as it was not a functional map, instead depicting historical paths.

A marine route shown on the map connects China to India, Africa, and the Middle East. Starting in Macao the path winds down, passes between Malacca and Sumatra, around the tip of India, and reaches the port city of Goa. This echoes a similar route Zheng He, a Chinese admiral, would have sailed in 1402 until reaching Africa. The 1621 map Wu Bei Zhi represents most of Zheng He’s voyages in great detail.

Above the label of Persia on the left-hand side is an inscription that reads Iter S. Thoma Apostl (Path of Saint Thomas the Apostle). The path demonstrates Saint Thomas’s travels from the Middle East to the coast of Malabar in India to preach the Gospel in 72 CE. These two examples demonstrate that Kircher was interested in incorporating historical and religious content into a map that also encompasses empirical and scientific findings.