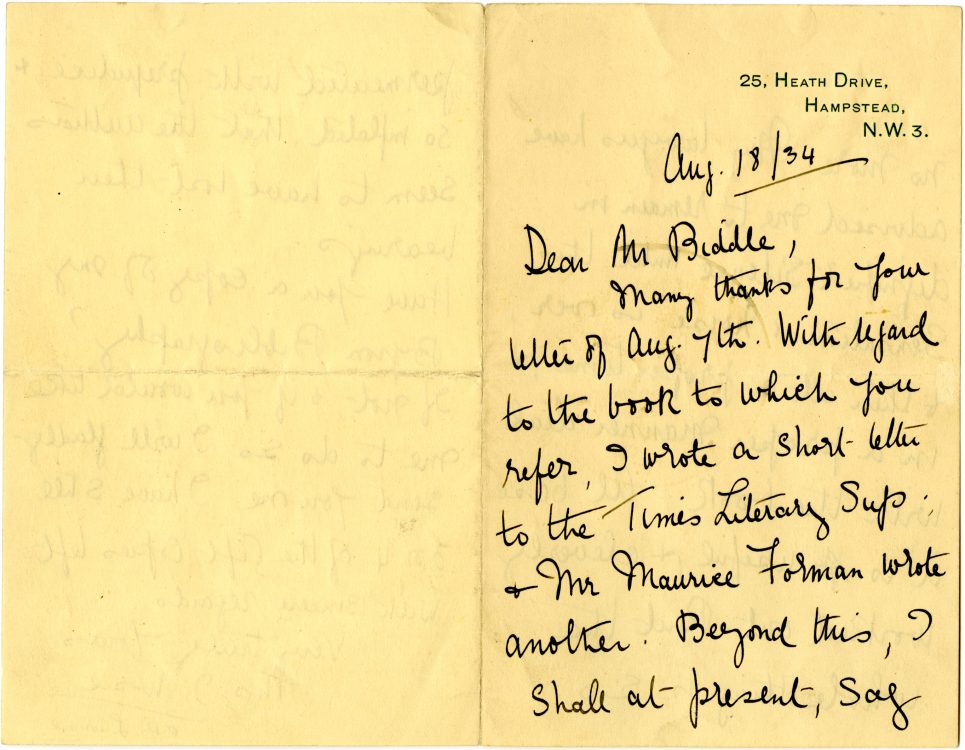 Louise Wise wrote this letteron behalf of her husband, Thomas, to Moncure Biddle, a Philadelphia based collector. Written just days after the publication of Carter and Pollard’s Enquiry, it contains Wise’s response to the controversy, which he dismissed as groundless: “My lawyers have advised me to remain in dignified silence, until this sensation & noise is over, & then at a proper time, & in a proper manner deal with the book. At base it is useful, & cleverly worked out. But the whole thing is so permeated with prejudice, & so inflated, that the authors seem to have lost their bearing.” 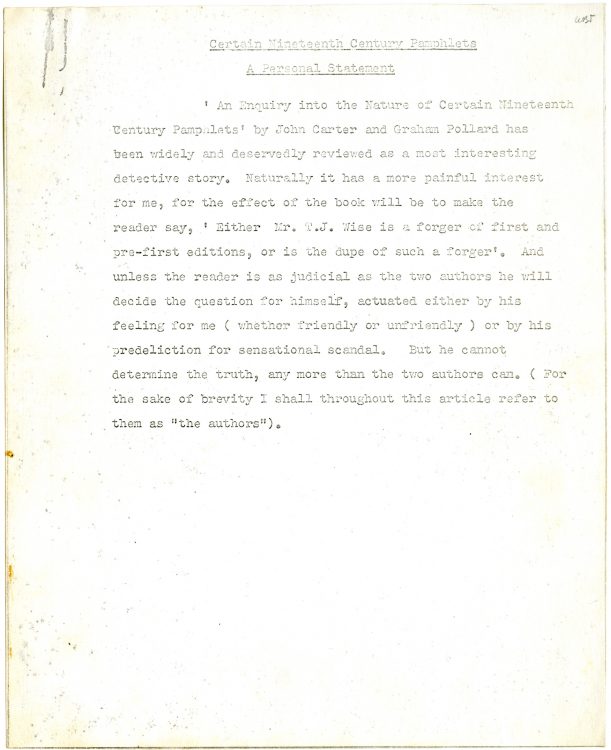 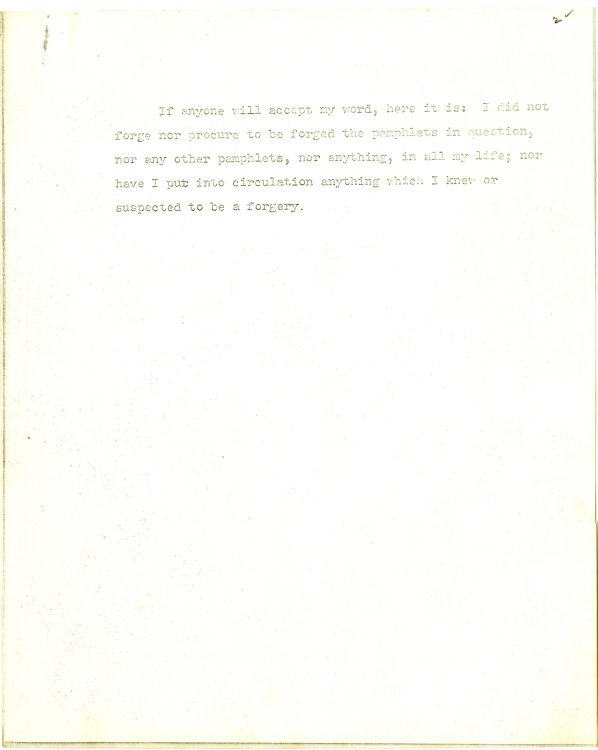 In one of his earliest responses to Carter and Pollard’s Enquiry, Wise submitted an article intended for publication in The American Book Collector, but he thought better of it and cabled to have it retracted from publication. Over thirty years later, John Carter acquired a copy of the typescript and printed four facsimiles for private circulation. While the Enquiry stopped short of accusing Wise of creating forgeries, Wise’s statement stated more bluntly that the effect of the book is that a reader would conclude “either Mr. T. J. Wise is a forger of first and pre-first editions, or is the dupe of such of a forger.” Wise emphatically stated that he had never produced any forgeries, nor had he knowingly circulated them. Although he never saw any legal consequences for his actions, Wise’s reputation never recovered. 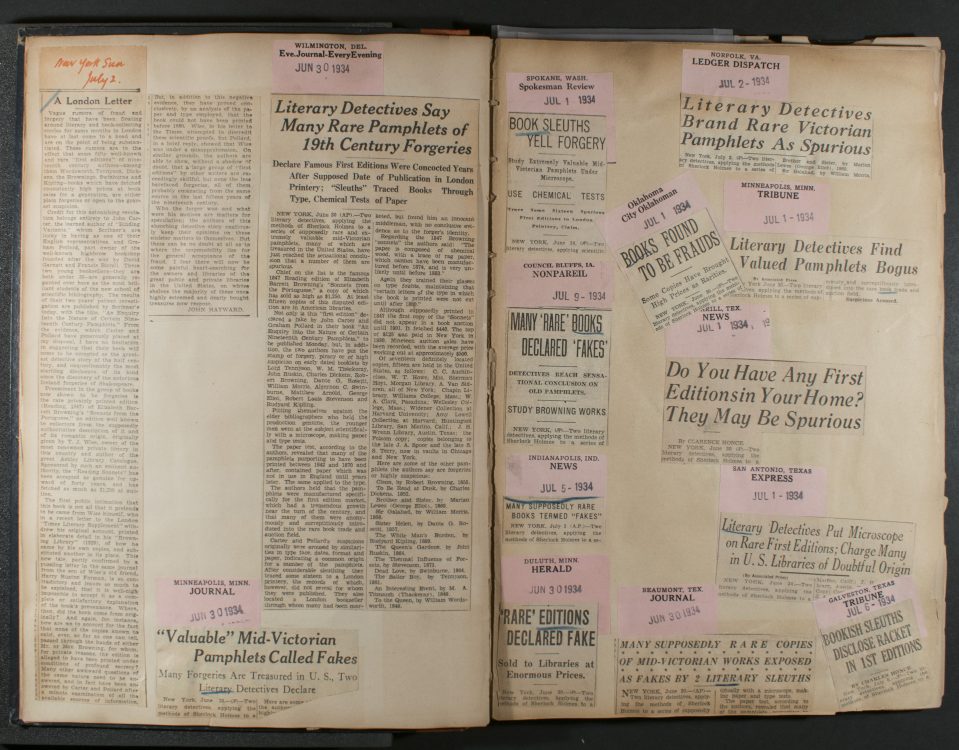 Scrapbook of American press coverage related to An Inquiry, 1934 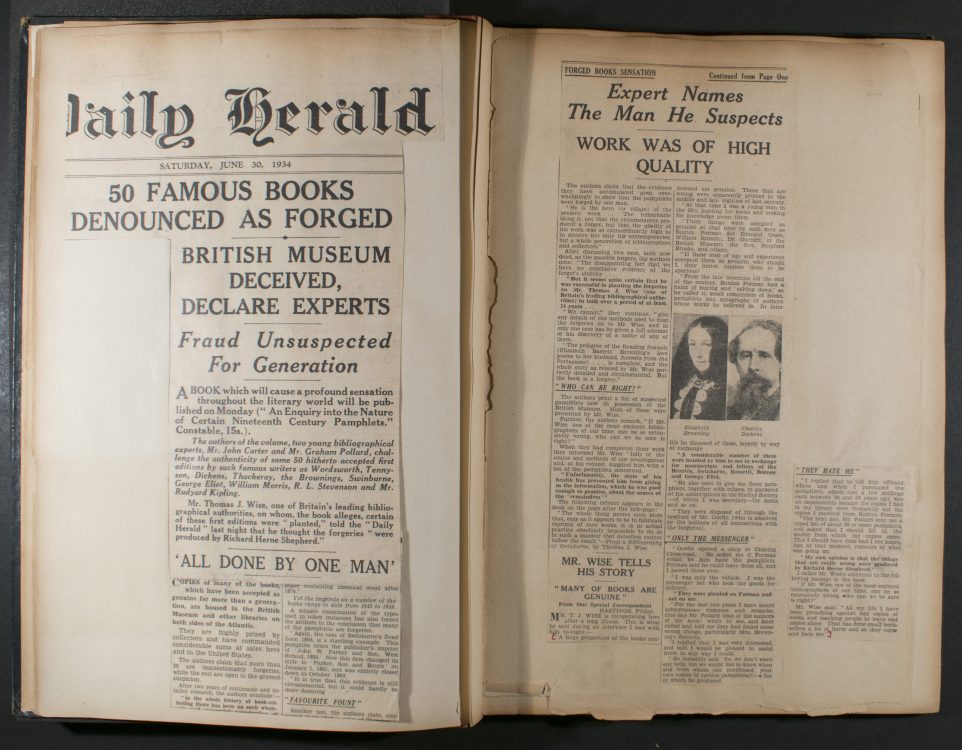 Scrapbook of British press coverage related to An Inquiry, 1934.

The publication of Carter and Pollard’s Inquiry generated a great deal of press coverage in both the British and American media. John Carter compiled these two scrapbooks of related news clippings. 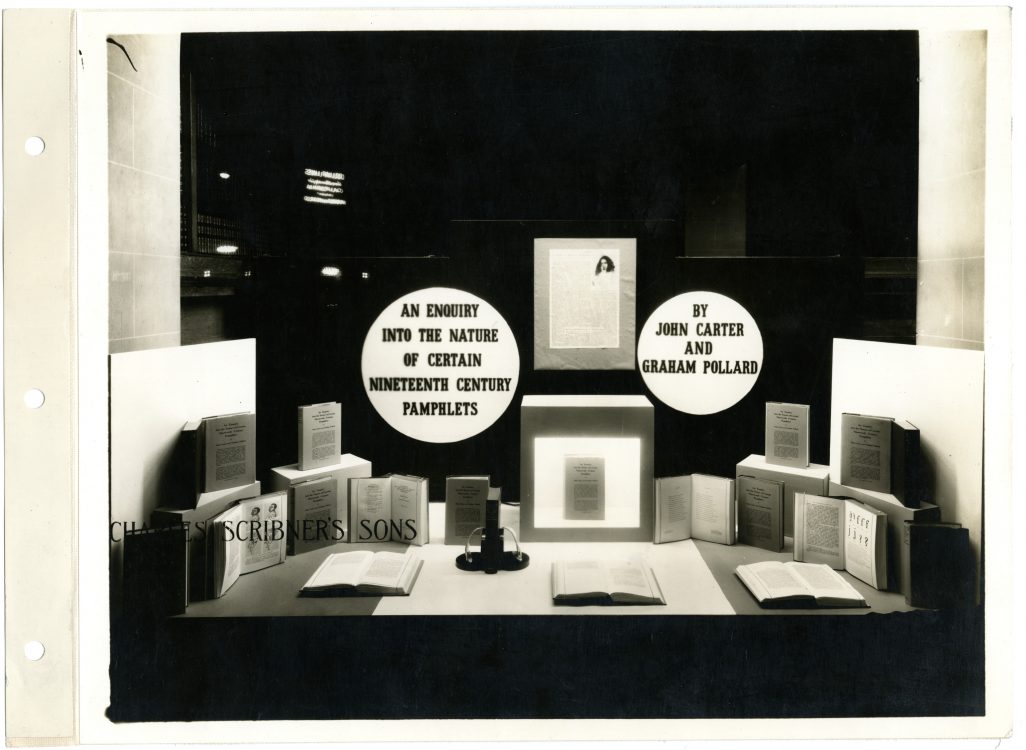 Photograph of Scribner’s window display for An Enquiry Into the Nature of Certain Nineteenth Century Pamphlets, [1934].
View Metadata

Photograph of Scribner’s window display for An Enquiry Into the Nature of Certain Nineteenth Century Pamphlets, [1934]. 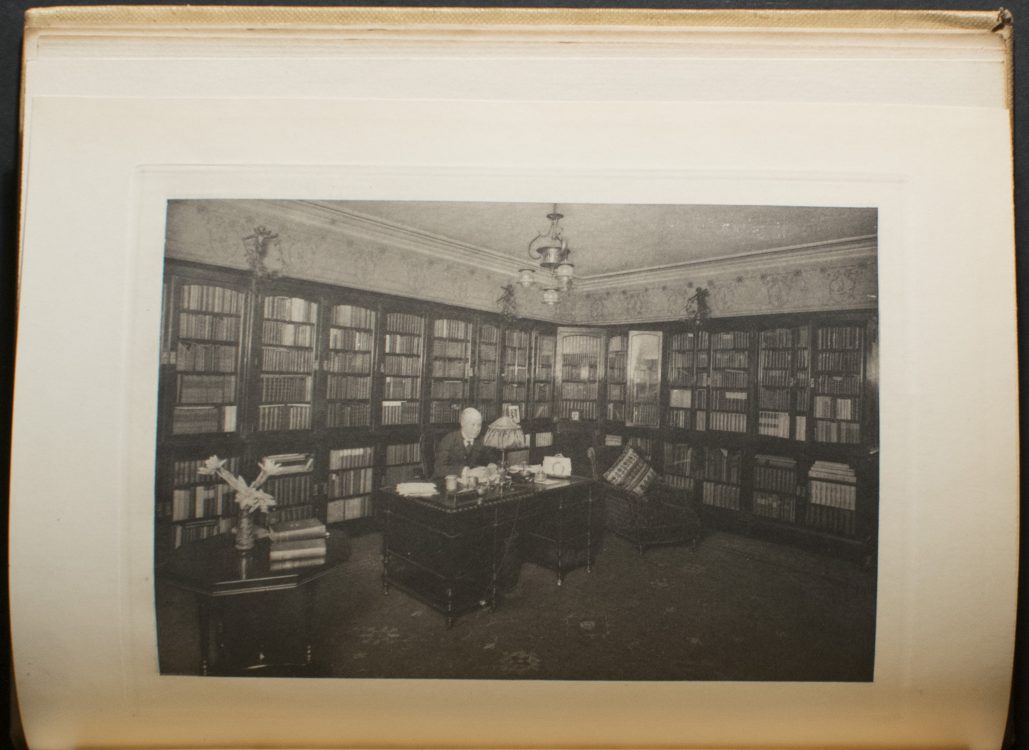 The Ashley Library: A Catalogue of Printed Books, Manuscripts and Autograph Letters. London: Printed for Private Circulation Only, 1922-1938.

The Ashley Library was Thomas J. Wise’s private collection of books and manuscripts of English poetry and drama from the Elizabethan period onwards. (It is named for Ashley Road, the street that Wise lived on when he started collecting). Spanning eleven volumes, his printed catalog lists detailed bibliographical descriptions of his collection. Alongside a great deal of genuine rare books, he also included fraudulent descriptions of the forgeries and piracies that he himself had created. This copy was owned by John Carter, and he has gone through the book and supplied it with handwritten notes identifying Wise’s lies and errors for posterity.

After Wise’s death, the entire collection was purchased by the British Museum. In 1956, the Museum’s staff discovered that Wise was guilty of another crime. During his lifetime, Wise frequently visited the British Museum and used their rare book collections for research. While there, he had also been tearing pages out of the British Museum’s rare books and taking them home to supply pages that were missing from his own copies of the same books. (Wise had deliberately purchased rare books that were missing pages because he knew that he could pay less money for an incomplete copy.) The Museum had unknowingly purchased materials that had actually been stolen from them many years prior. 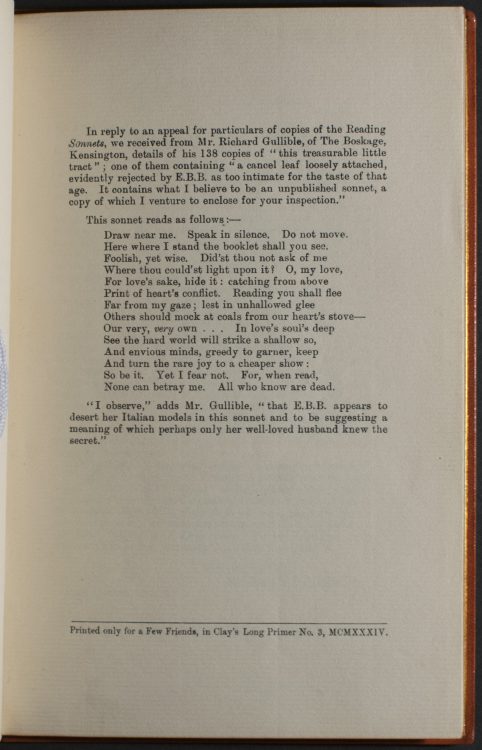 Richard Jennings was one of the many book collectors who was duped by Thomas J. Wise. After the publication of An Enquiry, Jennings’ response was to publish a series of five single-sheet pamphlets that parodied Wise and his forgeries. The pamphlets contain references to Wise, Carter, Pollard, and some of the others involved in the matter. Jennings wrote under the pseudonym of Richard Gullible and thus the series has become known as the Gullible Papers. He also provided false publication imprints for some of them. The pamphlets were circulated privately between Jennings and a handful of his friends, mimicking the manner in which Wise had falsely alleged that his forgeries had been printed and circulated. This volume contains all five of the Gullible Papers. Its previous owner, Lord Ritchie of Dundee, also printed a separate title page to explain the publication of the pamphlets. 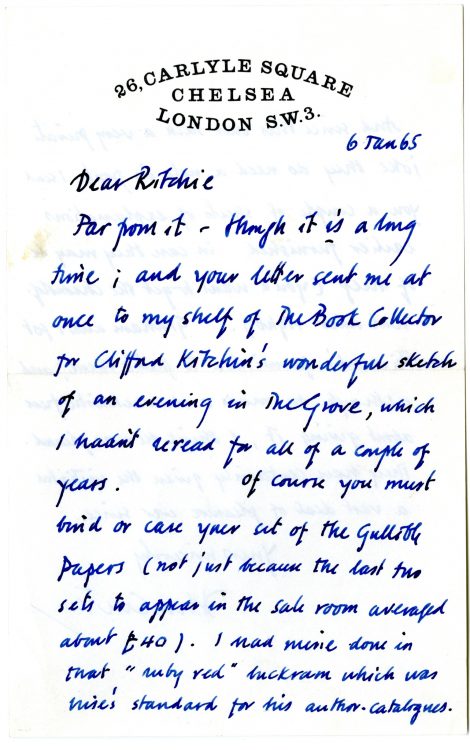 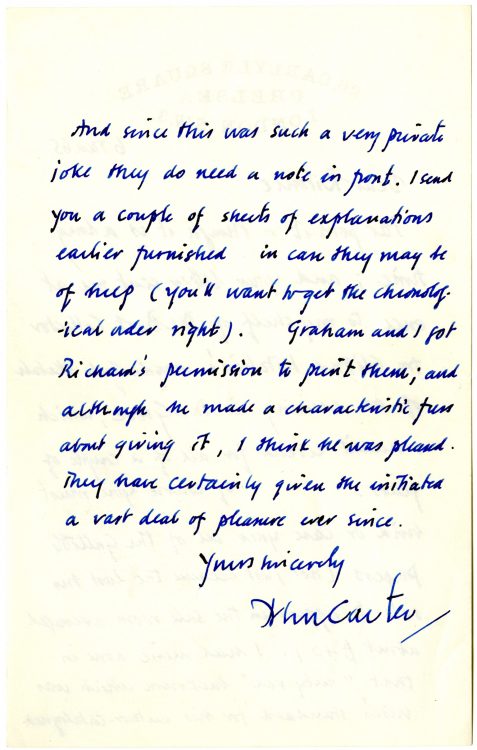 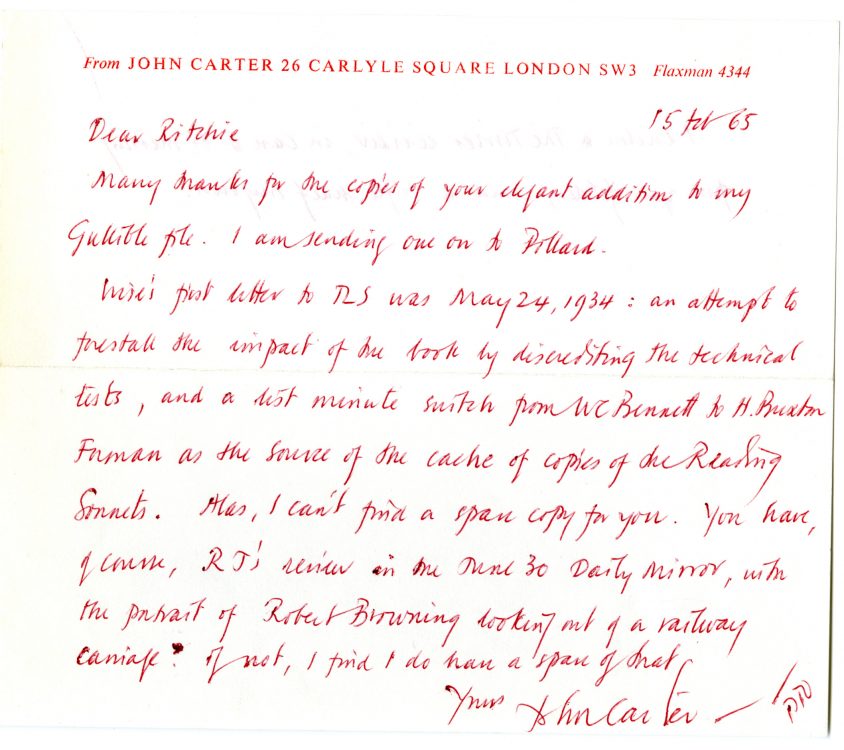 In these letters, John Carter describes the history behind the Gullible Papers. 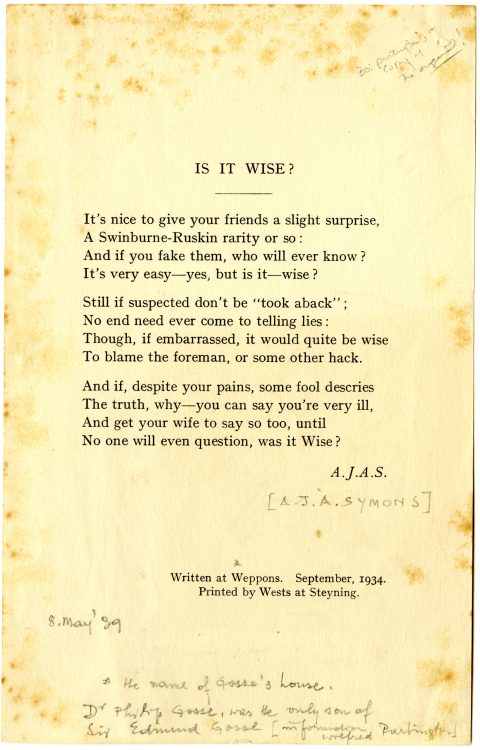 Another humorous response to the Wise forgeries, Symons wrote this poem making fun of Thomas J. Wise shortly after the publication of An Enquiry. 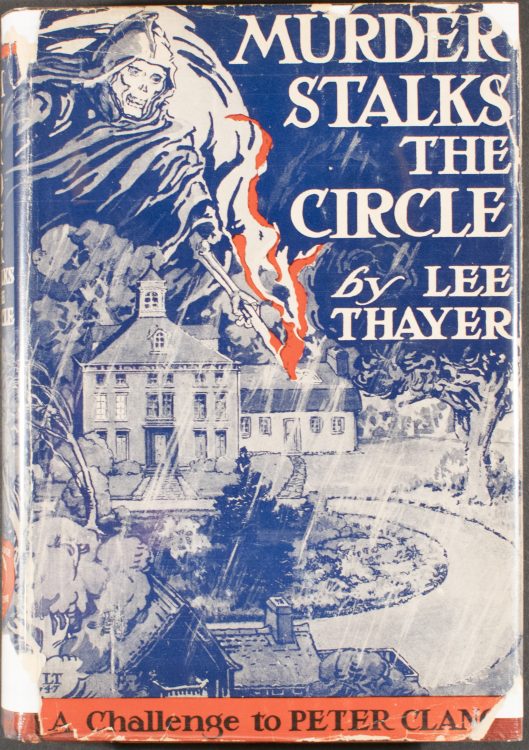 Ten years after his death, Wise and his forgeries were used as plot points in this murder mystery. The author alludes to Carter and Pollard, includes a brief mention of Wise’s career as a forger, and has his characters searching for a stolen book of Wise’s letters at one point. The book’s antagonist is a book collector, Morton Standish, who – like Wise – had been creating fictitious imprints for decades and presenting them as if they were hitherto unknown first editions. In this case, though, a colleague, Thomsen, reads Carter and Pollard’s Enquiry, grows suspicious of Standish, discovers the fraud, and tries to blackmail him. Rather than be outed as a forger – as a detective later describes, “for a man of Morton Standish’s position in the world of bibliomaniacs, to be found guilty of forgery would have been worse than death” – Standish resorts to murder.

In keeping with the fashion of the day, many of the forgeries were rebound in costly, decorative bindings, a testament to how highly prized these pamphlets were. Each one of these books represents a collector who was fooled by Wise. 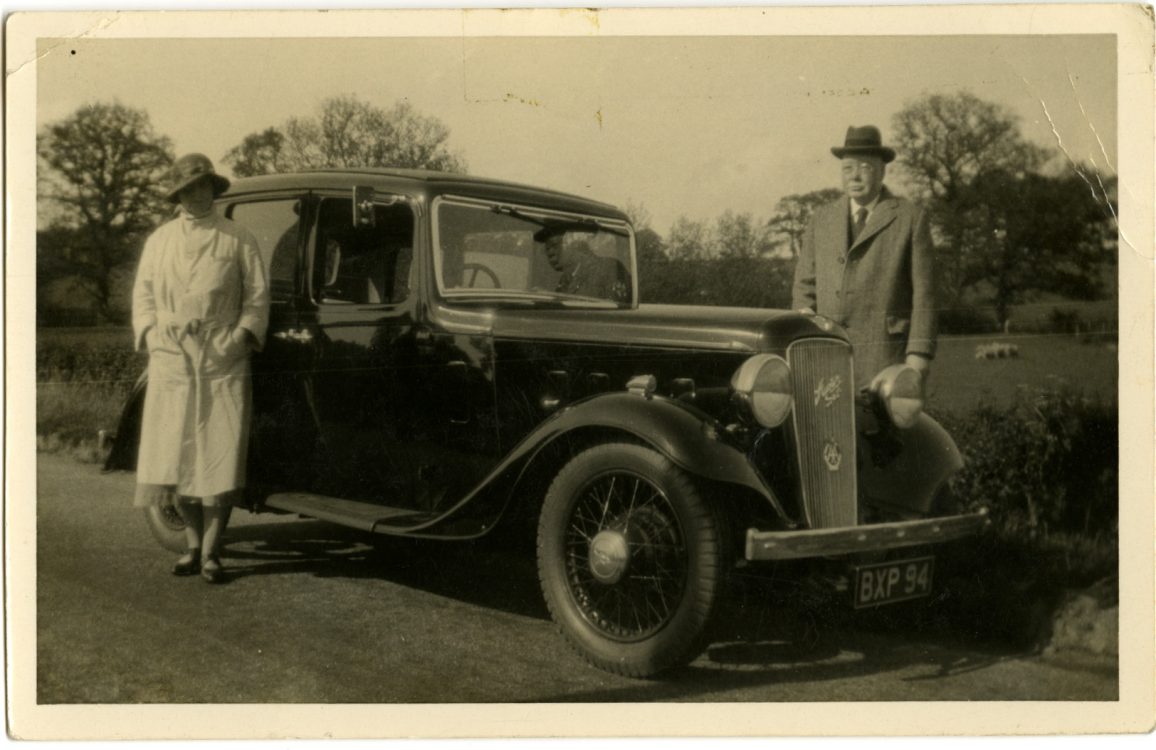 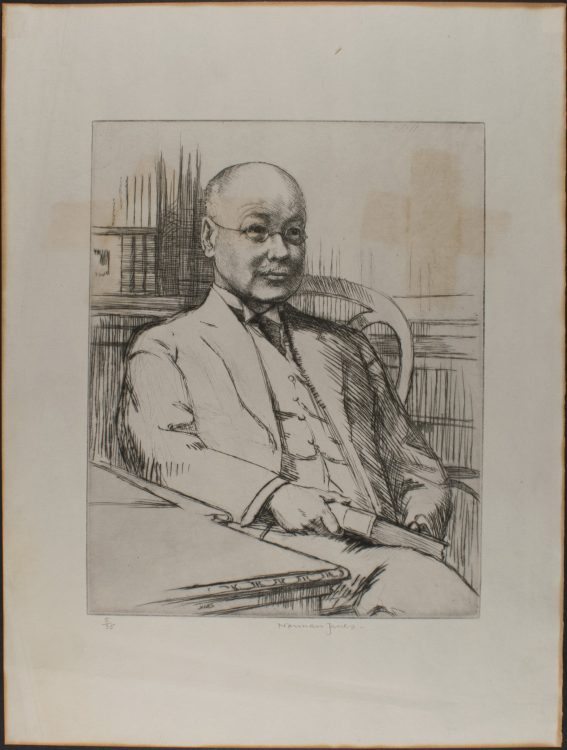