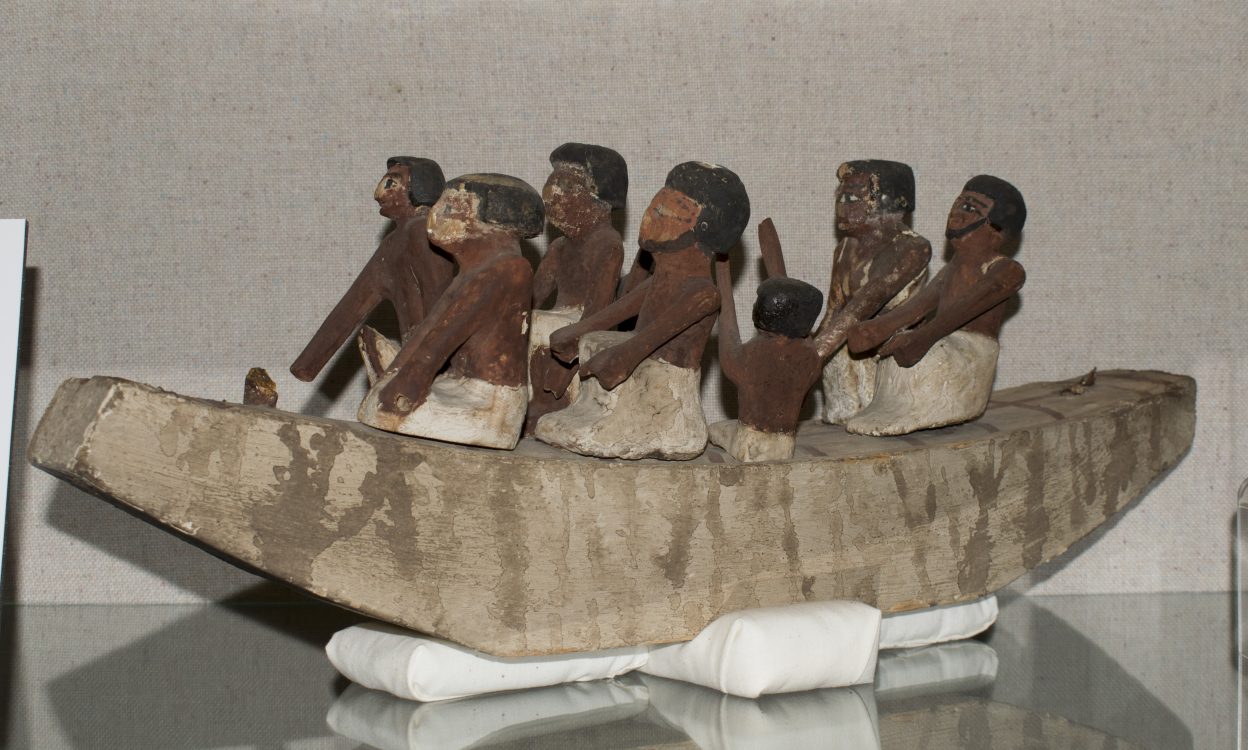 Forgery of an ancient Egyptian Wooden Funerary Boat Model, [No earlier than circa 1834]

In ancient Egypt, wooden models such as this were intended for use as funerary sculptures. They were entombed with the deceased, in the belief that he or she would use the boat to sail to the afterlife. These models were produced in large numbers during Egypt’s First Intermediate (2181-1991 BCE) and Middle Kingdom (2134-1690 BCE) periods. This model, though probably produced in Egypt, is a much more recent forgery.

The model is sculpted out of wood from Afzelia sp., a species native to tropical Africa and parts of Asia. The boat is painted with a mixture of calcium carbonate, iron oxide red, and carbon black, all of which were used in Egypt. In 1984, radio-carbon dating of a wood sample proved that the boat is, at most, only 150 years old. The individual figures could not be tested at the time: the radio-carbon test would have destroyed a wood sample roughly the size of one of their arms. (Newer techniques are less invasive). Stylistically, the figures are inconsistent. Some of them are in a rowing position, while others are positioned as if raising a sail, which is atypical of genuine funerary art. This could be a sign that the forger had no idea what he was doing. Alternately, some or all of the figures could be authentic ancient artifacts, culled from several fragmentary artifacts and reassembled to form a forgery that could be sold for profit.

Greek and Roman statues of Aphrodite/Venus were common in the Hellenistic (323-146 BCE) and Roman (146 BCE – 330 CE) periods. They were used to decorate homes and gardens, fountains, public baths and gymnasia. This sculpture was probably intentionally created to look like a fragment, in imitation of a damaged ancient statue: the damage to the neck and the positioning of the legs suggest that the seemingly missing pieces were never there in the first place. There is no evidence that any ancient sculpture was intentionally sculpted to imitate a fragment, which ensures that this piece is of fairly recent origin. Additionally, the statue is sculpted from fine-grained marble, whereas ancient Hellenistic and Roman sculptors used coarse-grained marble. Stylistically, the statue is atypical of the ancient period. Its body proportions suggest that it was based on a living model. The ancient Greeks, by contrast, made sculptures based on ideal human forms, according to mathematically calculated designs. In particular, the statue’s drooping breasts suggest that it is a fake: an ancient statute would have presented them an idealized form that ignored the natural effects of gravity. 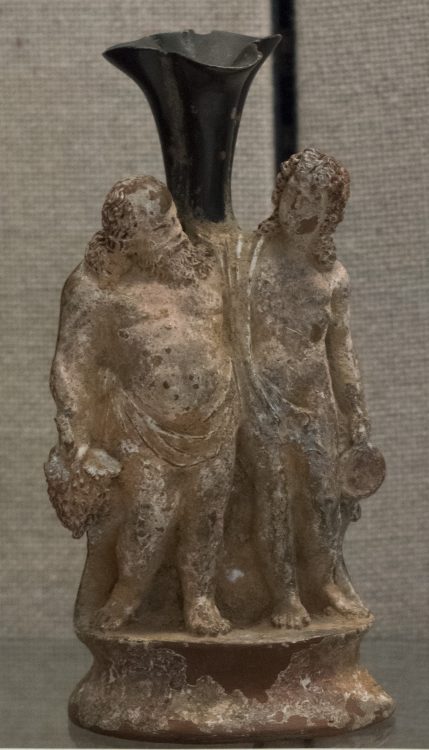 This forgery imitates a lekythos, a type of vessel originally made in Attica and exported widely during the fourth century BCE. This one features Dionysos, the god of wine, and his companion, Pappasilenos.

Stylistically, this item is unlike a genuine lekythos. Authentic lekythoi usually have a conical mouth with a cylindrical neck or a trefoil mouth with one large spout in the middle. This vessel has a flower-shaped mouth. Dionysos’ proportions are also wrong for the period. In particular, Dionysos’ face is much smaller than Pappasilenos, which is much more akin to artistic styles that appeared in the Hellenistic period (323 – 146 BCE). This suggests that the forger may have patterned his or her work off of a variety of ancient images, without any understanding of how artistic styles changed over the centuries.

A very similar forgery was owned by Julius Naue (1835-1907), a German painter, illustrator, and archeologist, whose collection of ancient artifacts was auctioned in Munich a year after his death. The stylistic similarities between the two suggest that these – and possibly others – were made by the same forger. 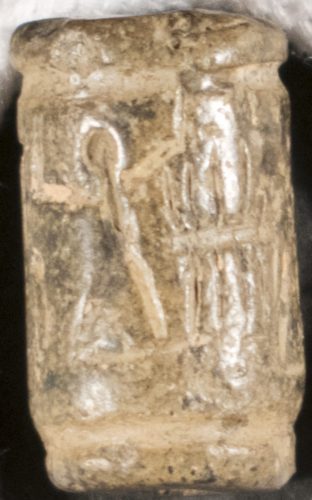 Cylinder seals were invented in the fourth millennium BCE near present-day Iran and Iraq, in tandem with the invention of cuneiform script. A seal was engraved with script and images and then could be rolled over clay to produce a copy of the inscription. They were used for administrative purposes – such as signing or notarizing a document – and were also worn as jewelry.

This cylinder seal is made from glazed ceramic material, which is unusual at best. Genuine cylinder seals were usually made from semi-precious stones. Stylistically, the engraved inscription and accompanying stick-figures are comically crude, and are unlike any particular artistic style found in genuine artifacts from the period. 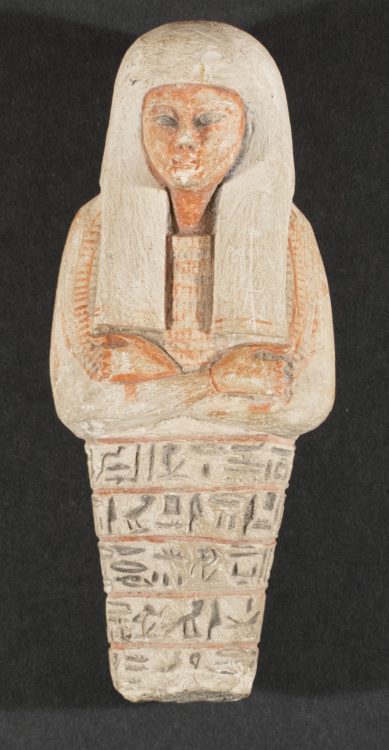 Shabti with Hieroglyphs, forgery of an ancient Egyptian artifact, [undated.]

A shabti is a small funerary figurine, commonly found buried in great numbers in ancient Egyptian tombs. Shabti figurines were intended to accompany the deceased in the afterlife, where they would work as servants and laborers for the souls of the dead.

Shabti were usually sculpted out of hard stone. This item is carved out of soft soapstone, which is, at best, atypical for this kind of artifact. The hieroglyphs carved into the shabti provide further confirmation that this is a crude fake. A genuine shabti was normally inscribed with spells taken from the Coffin Texts and the Book of the Dead. The hieroglyphs on this item are gibberish, and appear to have been copied at random. 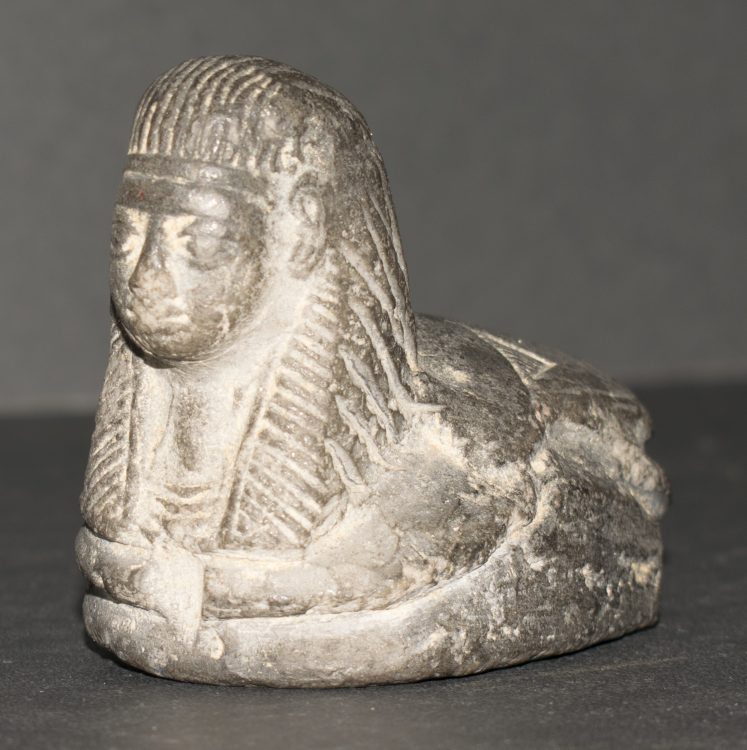 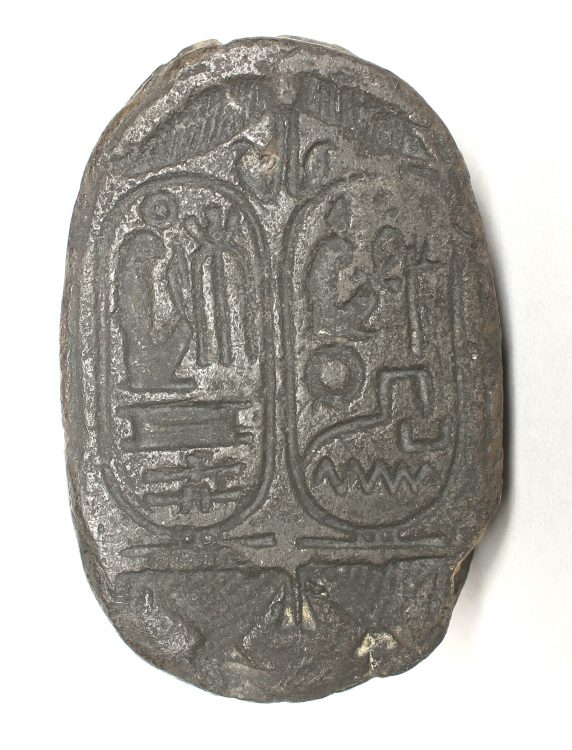 This item imitates a scarab, an artifact that was frequently used as an amulet and for administrative purposes in ancient Egypt. Genuine scarab seals were usually carved from stone or glass. This item, though, is made from ceramic material. Stylistically, it bears some similarity to other Egyptian sphinx figures, but a number of stylistic discrepancies suggest that this is a forgery. It is unusual to see the head of a pharaoh on a scarab figurine, and the facial features are, as well, atypical of the style. The base of this scarab sports two cartouche carvings. (A cartouche is a ring encircling signs that name a pharaoh and his titles). One of the cartouches is an accurate rendering of the cartouche of Ramesses II (1303-1213 BCE). Normally, the other cartouche would show either the pharaoh’s father (in this case, Seti I) or additional titles related to him, but, here, the other cartouche consists of random symbols and does not represent anyone. In all likelihood, the forger was copying actual artifacts and hieroglyphs, but did not understand what they said or what he was imitating. 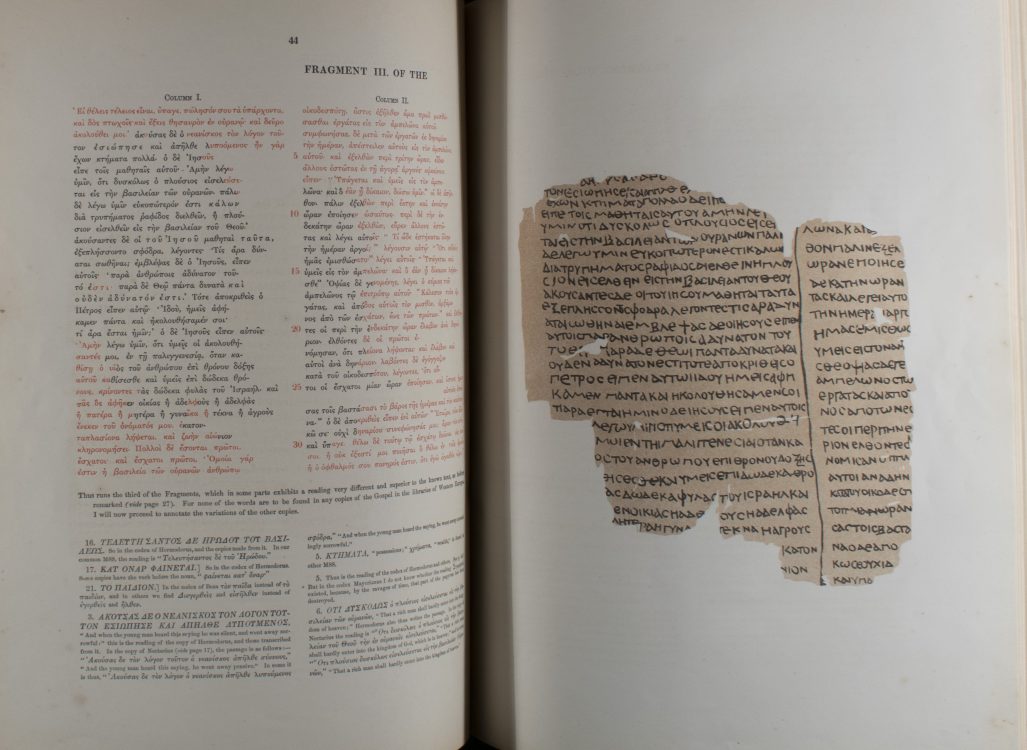 Fac-similes of Certain Portions of the Gospel of St. Matthew, and of the Epistles of Ss. James & Jude: Written on Papyrus in the First Century, and Preserved in the Egyptian Museum of Joseph Mayer, Esq. Liverpool. London: Trübner & Co, 1861.

Constantine Simonides was a Greek forger who specialized in ancient and Byzantine Greek manuscripts. He often forged manuscripts by non-existent authors he had invented, which proved particularly tantalizing to scholars, many of whom were fooled by his creations. He began forging manuscripts in his native Greece, around 1845. After being denounced he fled to Germany, and then to England, where he continued to sell his creations. In 1860, facing arrest, he fled to Egypt, where he continued to make and sell fakes, up until his death from dysentery.

In this volume, Simonides printed facsimiles of what purported to be Biblical manuscripts on papyrus, dating to the first century. He claimed he had found them in the private collection of Joseph Mayer, in Liverpool. His story was far too good to be true. Among other things, he claimed he had discovered a manuscript of the Gospel of Matthew that had been written only fifteen years after the Ascension of Jesus Christ. Better yet, this copy had been dictated by Matthew the Apostle and transcribed by Nicolas of Antioch (an early church leader described in the Acts of the Apostles). (Even today, the oldest known known nearly complete copies of this gospel date from the fourth century. Most scholars think it was written sometime between 80-90 CE). By this point, Simonides was well known as a forger, and this book was almost immediately denounced as yet another fraud.