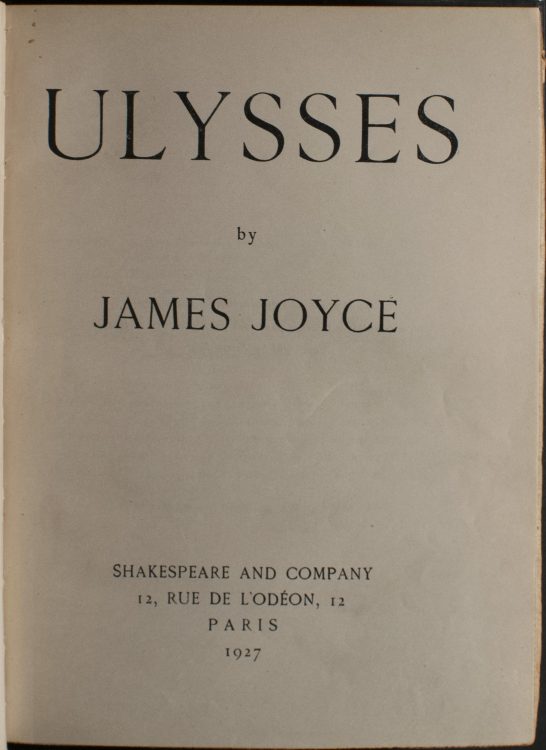 This volume purports to be a copy of the 1927 ninth edition of James Joyce’s Ulysses, as published by Shakespeare and Company in Paris. It is actually an American piracy published by Samuel Roth (1893-1974) in 1929 in New York. Roth took advantage of a loophole in American copyright law: copyright protections only extended to books published in the United States. At the time, Ulysses had only been printed in Europe. Thus, Roth’s publication was technically legal. This was typical of Roth’s publishing practices: he would identify foreign works that were not protected, and he would look for copyrights that had lapsed. Sometimes he would pay royalties to the authors, but usually only well after publication, and usually, also, only once the author or his or her agents had hounded him for payment. Ulysses presented another challenge: the text of the book was banned in the United States, on the basis that it constituted pornography. This meant that it was impossible for Joyce to officially publish the book in America and secure a copyright (although the ban was finally lifted in 1934). Roth’s piracy was thus the first American printing of the book. His pirated version can be identified by its much heavier paper stock and by the many typographical errors which plague the text. 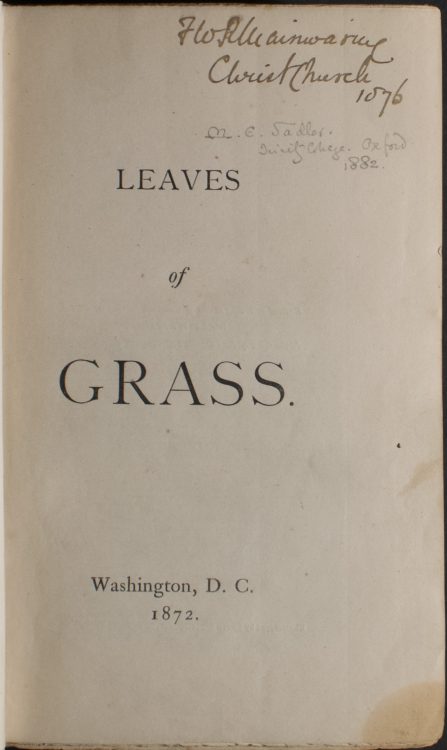 This edition of Walt Whitman’s poems was printed by John Camden Hotten (1832-1873) in London, in imitation of the fifth American edition, which had appeared in Washington, D.C. in 1872. The piracy can be distinguished from the real version due to a few textual variations and differing typographical ornamentations. Hotten posed as a distributor for this version, probably in order to sidestep British censorship laws, which would have affected an English imprint but not an American import. Hotten had also, previously, produced a Selected Poems of Whitman in 1868. He promised to pay Whitman royalties for that volume, but never actually did so. This piracy also proved to be the only complete edition of Leaves of Grass that was published in England during the poet’s lifetime. 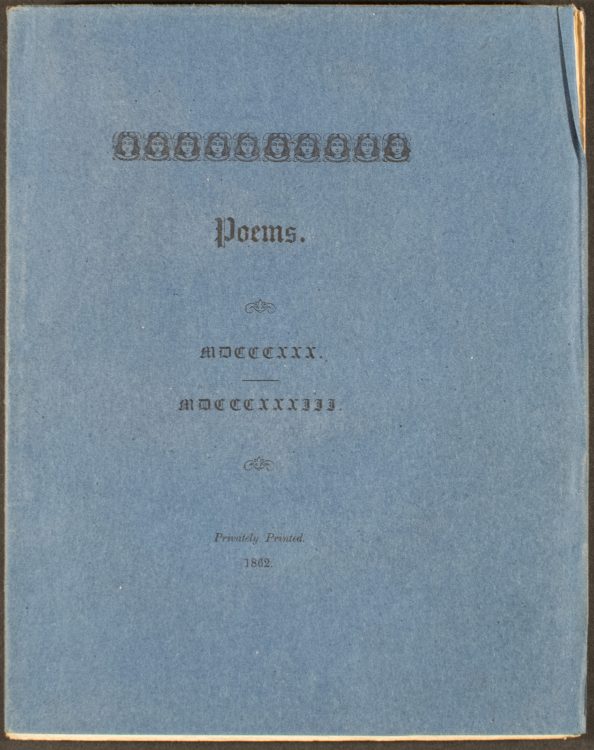 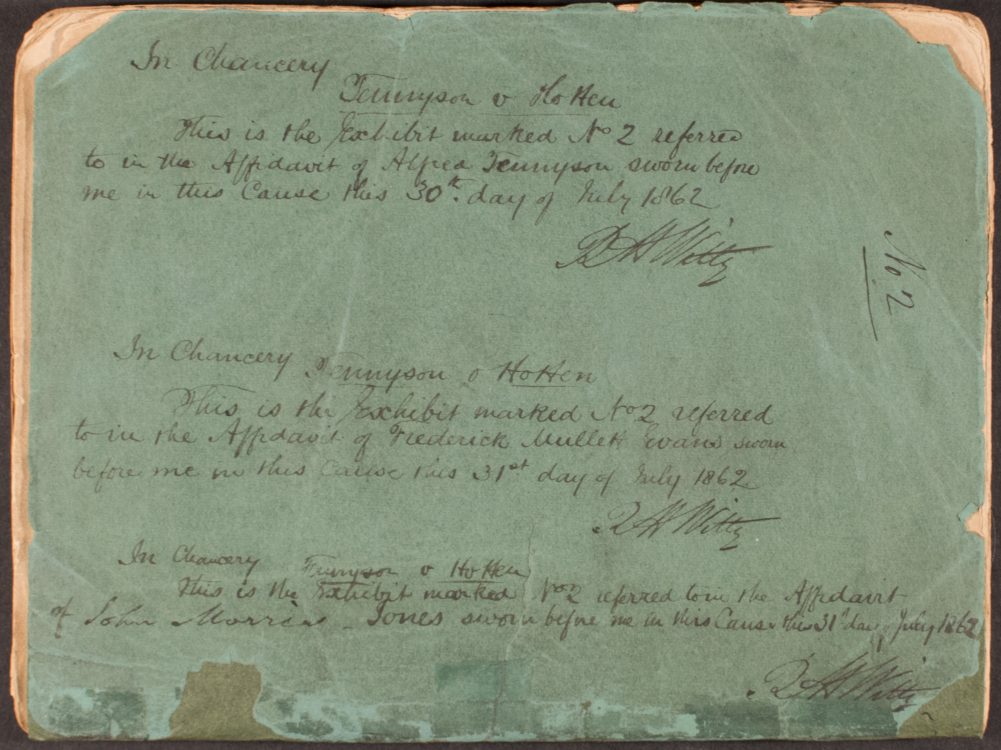 This piracy of Tennyson’s poems was advertised by John Camden Hotten (1832-1873) in his sale catalog and in a Sotheby’s auction scheduled for July 1862. (His listing in the Sotheby’s sale said that the book was the only copy available in England. This was a lie intended to drum up sales). The poems printed herein were taken from the 1830 and 1833 editions of Tennyson’s poems, and they include poems and textual variations that Tennyson had deliberately suppressed in subsequent printings. The publisher also neglected to include the author’s name anywhere in the book. Tennyson habitually rewrote and revised his poems from edition to edition. Thirty years later, the early printings of his poems were hard to obtain. He was a popular poet and many people wanted to see what the earlier versions of his poems looked like. Thus, there was a ready market for this kind of edition. Allegedly, it had been edited by J. Dykes Campbell, who had the piracy printed in Toronto. Campbell had supposedly intended it for private circulation among his friends. He claimed to have brought 50 copies with him to London, some of which were then purchased by Hotten. (There are at least two surviving copies with presentation inscriptions from Campbell, so his story may be true. Campbell may never have even intended to profit from it).

After learning of the Sotheby’s sale, Tennyson sued Hotten in the Court of Chancery, in order to protect his copyright. The copy on the right is the copy that was entered into the court as Exhibit 2 as evidence. The court’s notations can be seen on the back cover. Tennyson had previously annotated it to identify where Hotten had included poems and variants not present in the current collected edition. The case was ultimately settled out of court, with Hotten paying a fee of 100 pounds and surrendering all his remaining copies to Tennyson. (The court also concluded that the volume had been printed in England and had zero connection to Canada). 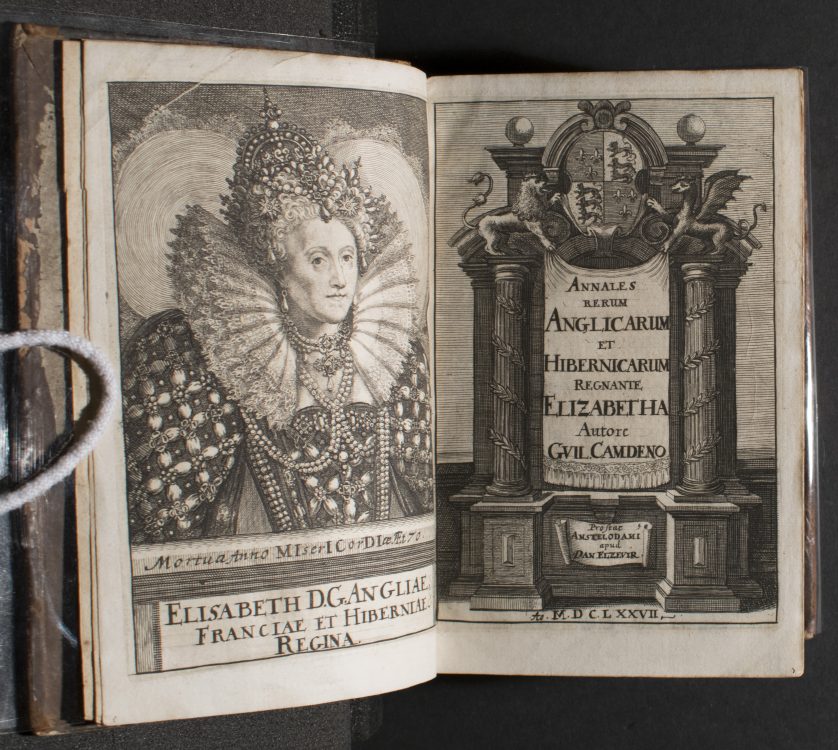 First founded by Louis Elsevir (ca. 1540-1617) in the late sixteenth century, the House of Elsevir was one of the leading publishing and bookselling firms in Europe, with Elsevir’s descendants operating under the family name well into the eighteenth century. The firm was particularly known for printing high quality, inexpensive imprints. Because the Elsevir imprints were known for the high standard of quality that went into their editing and printing, many other publishers opted to produce works that claimed, falsely, to have been printed by the Elsevirs as well. These piracies thus claimed to possess a standard of quality that their true publishers did not necessarily have. The volume on display, a history of England, claims to have been printed by the Elsevirs in Amsterdam, but is actually a counterfeit imprint, possibly of German origin.