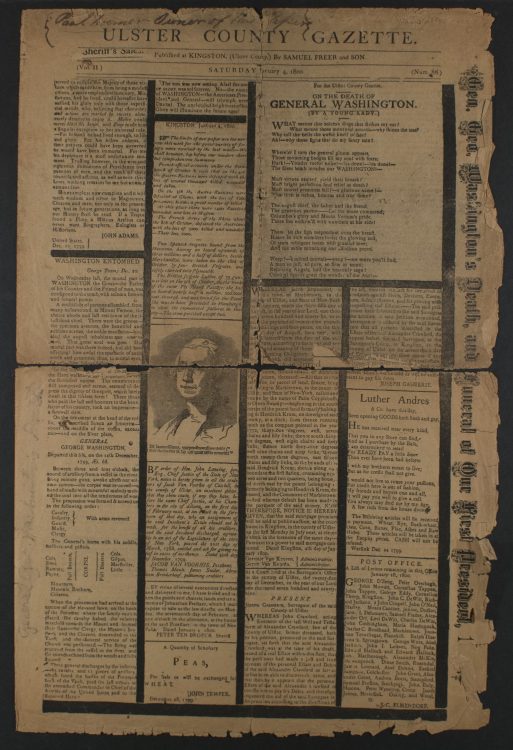 The Ulster County Gazette was first published on May 5, 1798 in Kingston, NY by the father and son team of Samuel Freer (1741?-1804) and Samuel S. Freer (1777?-1840). The January 4, 1800 issue printed an account of George Washington’s (1732-1799) death. The report came a bit late, as Washington had died on December 14, 1799. Ulster County had no connection to Washington. At most, he may have briefly been in the vicinity during the American Revolution. There were plenty of other newspapers across the country, almost all of which printed something about the first president’s death. Then, as now, newspapers were ephemeral objects: most people threw them away as soon as they were done reading them. Today, only two original copies of this issue survive. There are, though, at least seventy-five different reprints, of which this is one of them. They may have appeared as early as 1828. Another reprint appeared circa 1848, with several others produced in 1876 for sale at the Centennial Exposition in Philadelphia. These are not true facsimiles, as the technology to produce an exact printed copy did not exist yet. Rather, someone had to put together a new typesetting based on the original. These reprints were not issued with any intent to deceive; they were advertised and sold as replicas. But, because they were not printed with any additional identifying information, over time it became very easy to mistake them for copies of the original issue.

In the case of this reprint, the typeface gives it away as inauthentic. In the original issue, the Gazette’s title was printed in italic font. Here, it is in a Roman typeface. Additionally, the paper is of the wrong quality. The original would have been printed on handmade paper, which is chemically stable and does not become brittle as it ages. The reprints were printed on mass-produced wood pulp paper, which is inherently acidic. Its chemical composition causes the paper to degrade over time, resulting in the brittle and extremely fragile specimen on display. 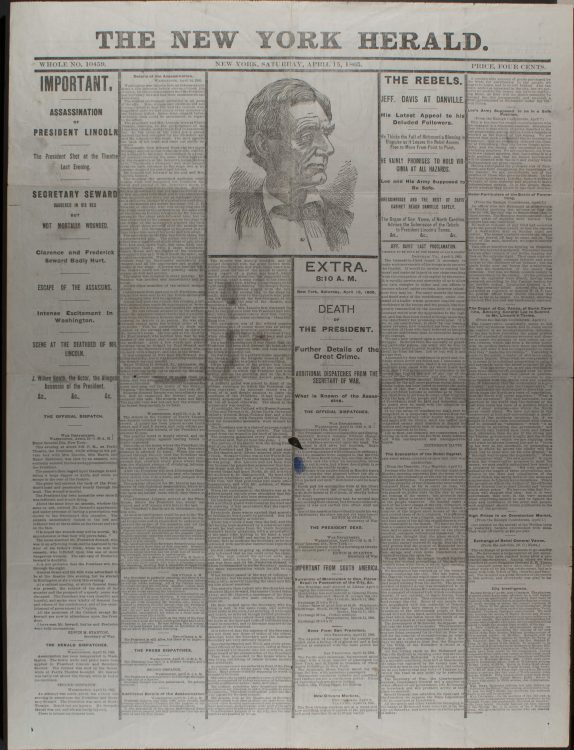 The April 15, 1865 issue of the New York Herald printed one of the first accurate accounts of the assassination of Abraham Lincoln (1809-1865). A first version appeared at two in the morning and was followed by several updated versions (3 am, 10 am, 2 pm, and finally 3:30 pm) reporting new details about Lincoln’s death and Andrew Johnson’s inauguration. Original copies of the newspaper are extremely scarce. In addition to being, by its own nature, an ephemeral object, this issue was a local daily edition, and would not have circulated much beyond New York City. (And in the event that someone wanted to save the paper as a souvenir of a significant moment, it would have been an odd choice: the Herald was fiercely hostile to Lincoln, and there were plenty of pro-Lincoln newspapers to choose from.)

The paper was widely reprinted in the late nineteenth and early twentieth centuries, often without clear indication that the paper was not an original. Many of the reprints were produced for advertising purposes and were never intended to deceive. However, after over a century, it is common for someone to stumble on a copy that their ancestors purchased and mistake it for an original. Several details let us confirm that the paper on hand is a later copy. First of all, the real papers had the line “Whole No. 10459” printed at the top; this one does not. Secondly, the New York Herald did not print their papers with portrait illustrations at the time. Additionally, the beardless image of Lincoln in this copy would have been at least five years out of date in 1865, since Lincoln had been wearing a beard since 1860. Finally, the ads on the back page could not have printed in 1865. Some of them display products that did not exist in 1865, such as Jell-O, which was invented in 1897. More importantly, some of the ads printed on the reverse side of the page are dated 1899 and 1900.