The items in this section reveal Alice Dunbar-Nelson’s importance as a reader and literary critic. As a newspaper columnist, she wrote numerous reviews of books on all sorts of topics, including the works of African American poets and novelists of her day. Her literary judgments are also revealed in reading journals and diaries. Finally, Dunbar-Nelson offered opinions in essays, where she addressed the relationship of African American literature to social issues.  Most of the books represented in this part of the exhibition received praise from Dunbar-Nelson in her journalism, reading journals or diaries. (Thanks to Dr. Jesse Erickson for information about Dunbar-Nelson’s reading journals and diaries, based on his research.)

This is the first letter the famous poet sent to his future wife. He had become aware of her when he saw her picture and one of her poems in the Boston Monthly Review. The two had not yet met at the time Dunbar sent this letter. As politely as possible, he expresses a strong interest in Alice and her literary work. At one point, he asks a question that is clearly aimed at finding out whether Alice approved of his dialect poems and the “quaint” images of African Americans that had made him successful but that had also drawn criticism. The two writers were married about two years after this initial contact.

Johnson was an important figure in the Washington D.C. branch of the “New Negro” or Harlem Renaissance movement. Her home (“the S Street Salon”) was a gathering spot for important Black writers during that period. Dunbar-Nelson heaped praise on an Autumn Love Cycle. (See her review in this section of the exhibition). In addition to poems Johnson wrote many plays and, like Dunbar-Nelson, edited a newspaper column. 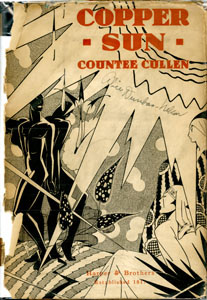 Dunbar-Nelson had high praise for Copper Sun, the third collection by the respected Harlem Renaissance poet Countee Cullen. The poems display the polished, formal style Cullen is known for, even in poems about intensely emotional topics. Although much of his work addressed race and racism, he did not embrace the label “black” or “racial” poet. He thought poetry should also reach for “larger” themes, such as beauty and death, sometimes without specific racial content. This distinguishes him from Langston Hughes, who saw the development of racial themes as central to the mission of the “Negro poet.” Dunbar-Nelson clearly came down on Cullen’s side of the issue, although she expressed appreciation for certain works by Hughes, as well.

This is one of the scrapbooks in which Dunbar-Nelson kept clippings of many articles from her newspaper column “As in a Looking Glass,” which appeared in The Washington Eagle. On the left page seen here is a positive review of Georgia Douglass Johnson’s book An Autumn Love Cycle. On the right page is a favorable review of the Christmas 1928 issue of the literary journal Black Opals, which was published in Philadelphia during the Harlem Renaissance period. Copies of both the items mentioned in the reviews are on either side of the scrapbook, next to the page that mentions them.

This is a rare copy of a Philadelphia-based “little magazine” of the Harlem Renaissance. The short-lived periodical received encouragement and contributions from a number of luminaries of the New Negro group, including Alain Locke, Langston Hughes, and Jesse Redmon Fauset. (Fauset’s novel The Chinaberry Tree is included in this exhibition.) This particular issue of Black Opals is devoted exclusively to poetry. Other issues included short stories. Alice Dunbar-Nelson’s positive review of this issue of Black Opals can be seen in the scrapbook that sits to the left of this magazine.

In her reading journals and diaries, Dunbar-Nelson reported that it took her a while to warm up to Hughes’ work, whose blues-inspired poetic style differed from the European-influenced technique of Dunbar-Nelson herself. However, she did write favorable remarks about certain of Hughes’ books, including his first novel, Not Without Laughter (1930). The semi-autobiographical work was written while Hughes was a student at Lincoln University, a Historically Black University (HBCU) located near Philadelphia. This limited edition copy contains illustrations from The Migration Series, a set of paintings by renowned African American painter Jacob Lawrence (1917-2000).