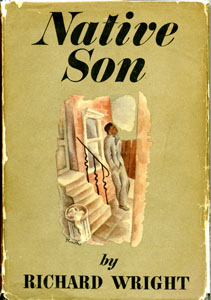 Critic Henry Louis Gates has written, “If one had to identify the single most influential shaping force in modern Black literary history, one would probably have to point to Wright and the publication of Native Son.” This landmark work presented the world with Bigger Thomas, a tragically flawed product of a racist society. It sits firmly in the tradition of protest fiction, and reflects the social determinism Wright discovered in the theories of the Chicago School of Urban Sociology. Interestingly, the book was also a Book-of-the-Month Club selection with a large white readership. This first edition of the book has a Book-of-the Month Club review laid in.

In one essay (“Everybody’s Protest Novel”) in this famous collection, Baldwin presents a harsh critique of protest fiction, including Native Son. In Baldwin’s view, Wright’s novel presents a character (Bigger) who is an implicit acceptance of “monstrous” images associated with Black men. By contrast, Baldwin suggests that African Americans need to recognize the humanity they possess, rather than seeking to reclaim it through the type of violence Bigger carries out. Before the appearance of Baldwin’s piece, Wright had functioned as a mentor to the younger author. The essay caused a rift between the two that never healed.

In this essay Wright states that the main character of his novel Native Son is an amalgam of Black men the author observed while growing up in the Jim Crow South. Further, Bigger is also based on the many whites Wright saw after moving to Chicago, whites living under the “ruthless and impersonal commodity profit machine,” of which the Jim Crow South was but a part. Wright explains that Native Son as a warning about the dangerous potential inherent in such a system.