During the late sixties, civil rights gains were allowing for increased Black participation in American democracy. At the same time, there were massive protests against lingering inequality. In the midst of these struggles, Black Arts poets worked to forge a uniquely black aesthetic. Their work was often characterized by anger in the face of racism and celebration of African American culture. Black Arts poetry sought to aid African Americans in freeing themselves from the political, psychological and cultural effects of racism. Although individual poets differed in their concerns and techniques, many shared the goal of encouraging a new, liberated, Black consciousness.

Brooks was the first African American to win a Pulitzer Prize, for this collection of poems. During the mid-1960s, she was prominent among the Black Arts poets based in Chicago. Her poetic focus on the lives of ordinary Black Americans put her in synch with many of the younger poets associated with this movement.  This part of her career was accompanied by a shift from white-controlled publishers to smaller, African American ventures such as Dudley Randall’s Broadside Press and Third World Press of Haki Madhubuti. One of Madhubuti’s collections is included in this part of the exhibition.

As suggested by the title of this collection, Sanchez’s early poetry was infused with the revolutionary ethos of the time. She went on to become one of the most respected poet/activists, as well as a teacher. The cover of this Broadside Press chapbook provides an example of design work meant to exemplify the African American esthetic that came out of the Black Arts movement.

“Letter to Jim,” 1970.University of Delaware Special Collections and Museums.

This letter was written by Sanchez to accompany the inscribed copy of her poetry chapbook We a BaddDDD People!, which is found in this part of this exhibition. 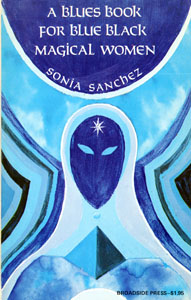 This book was chosen because of its overt appeal to both women and the blues tradition, the latter of which has been a source of poetic inspiration up until the present day.

Askia M. Toure is one of the founders of the Black Arts Movement. Songai, his second volume of poetry, evokes a cosmic connection to Africa as the key to a fulfillment for African Americans. (Songhai was an ancient West African empire, and Askia was the name of a line of rulers who governed the empire during the fifteenth and sixteenth centuries.) 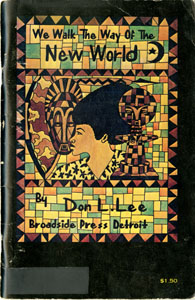