In 1895 the as the social and political gains of the Reconstruction period were being rolled back for African Americans,  Booker T. Washington delivered a now famous speech in which he declared that Blacks should concentrate on vocational training and agricultural pursuits, rather than pursuing full legal and social equality with whites. In The Souls of Black Folks noted intellectual W.E.B. Dubois offered a point-by-point critique of Washington’s position, which, he felt was an insufficient response to a situation in which the rights of African Americans were under increasing attack. The terms of this debate would prove to be influential for decades, as various thinkers and leaders imagined and planned ways to improve the situation of African Americans.

This important book from the period contained essays that also present the two men’s divergent views on education.  Washington’s “Industrial Education for the Negro” promoted trades and practical skills as the best way forward for African Americans.  By contrast, W.E.B. Dubois’ essay “The Talented Tenth” argued that a liberally educated Black elite should guide the way to progress. The ideas and activities of both leaders are implicit or explicit reference points for many of the later books presented in this exhibition. The position of Washington’s article in the book and the presence of his photograph as the frontispiece suggests. 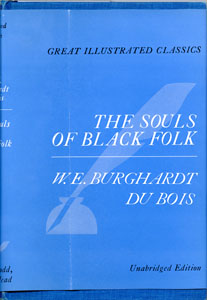 Besides the essay critical of Washington’s views (title), The Souls of Black Folk provides an overview of the difficult situation facing African Americans, one generation after the end of slavery. At this time the right to vote had been neutralized in the southern Unites States, and the sharecropping system kept many southern Blacks in a situation of virtual slavery. Souls may be the most influential African American text of the 20th century. “The color line” i.e. pervasive institutionalized racism would be the problem of the twentieth century, Dubois wrote prophetically.

This work is not as well known as Washington’s other autobiographical volume, Up from Slavery, which contains the text of his “Atlanta Compromise “speech. However, both emphasize the importance of hard work, thrift and other Victorian values in the author’s “rise” from slavery. These are the values Washington offers as an example to Blacks and whites, in his gradualist vision of Black progress. Many southern whites approved of the accomodationist stance Washington laid out here and elsewhere, including some who were opposed to voting rights and social equality for Blacks.