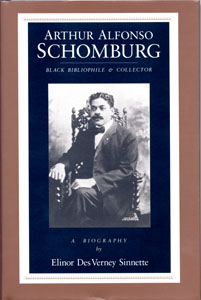 This biography chronicles the life of Arthur Schomburg (1874-1938) a native of Puerto Rico who moved to New York in 1891, and went on the establish the world’s most important research collection of African American and African Diaspora books and manuscripts. Schomburg also produced the first important bibliography of African American authors and contributed an essay (“The Negro Digs up his Past”) to the Harlem issue of the magazine Survey Graphic, on display elsewhere in this exhibition. Located in Harlem, the Schomburg Center for Research in Black Culture now holds more than 10 million items, and is part of the New York Public Library system. 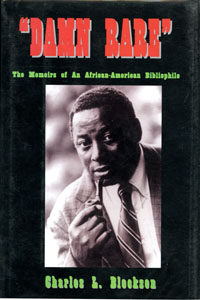 Located at Temple University in Philadelphia, The Charles Blockson Afro-American Collection is one of the country’s most important repositories of African American and African Diaspora books, manuscripts, photographs, sheet music and other items. In his memoir, famed bibliophile Charles Blockson reflects on his life, travels, and other experiences that accompanied his years of dedicated collecting. The catalog of the Blockson collection, published in 1990, is also an important resource for researchers, collectors, and librarians.

Belle da Costa Greene (1883-1950) came from a prominent African American family of Washington D.C., with strong ties to civil rights activism. However, as chief librarian at the Pierpont Morgan Library in New York City she chose to conceal her racial identity. During the decades when she worked at the Morgan she amassed its priceless collection of medieval and Renaissance manuscripts, books and artworks, working on behalf of J. P. Morgan, and then for his son. Ardizzone gives what details she can about Greene’s life, although the author is constrained by the fact that Greene burned her personal papers before her death.