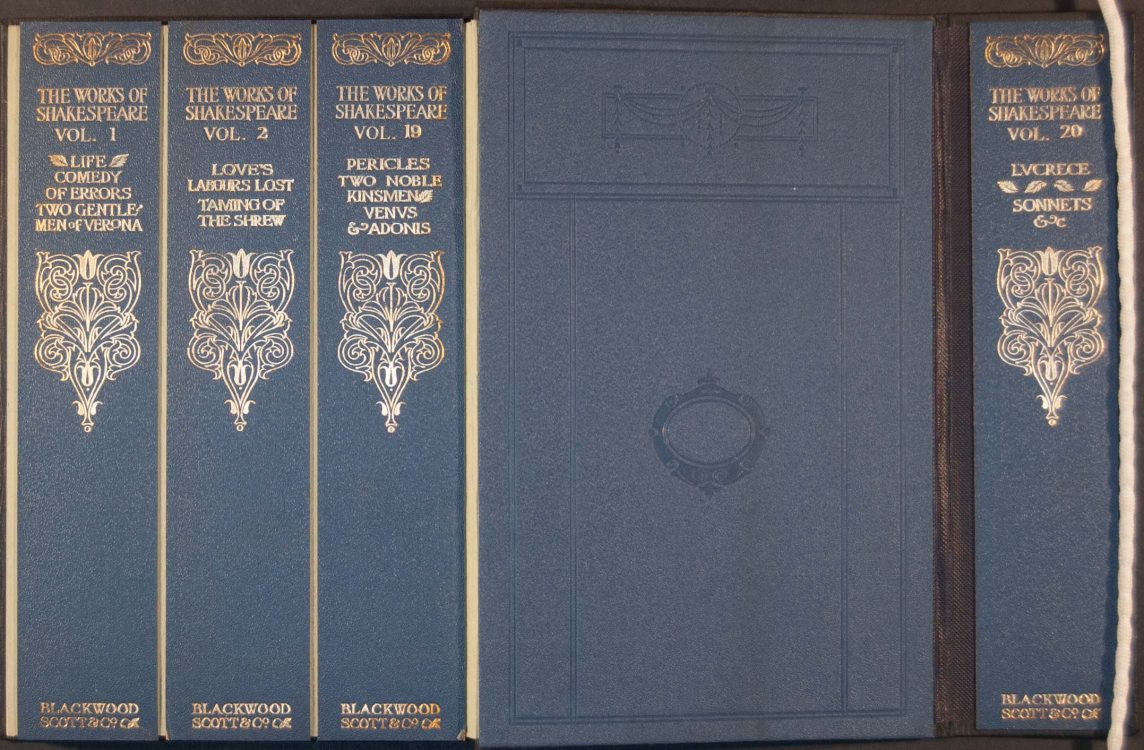 This edition of Shakespeare’s works was sold as a twenty-volume set, augmented with illustrations and critical annotations. The preface proclaims that “Shakespeare is, by general suffrage, the greatest name in literature.”

A salesman’s sample copy was a partial representation of a published work, used by travelling door-to-door salesmen and by publisher’s representatives. These volumes were produced at a time when the manufacture of books had become increasingly industrialized, allowing for a far larger book trade than had been seen before. The sample copies usually contained selected illustrations, portions of the text, and multiple binding samples to give an approximation of what the finished book would be like. Prospective customers were often able to pick from several different binding styles and designs, depending on their taste and budget. A subscriber’s register was usually included at the back of the book to record sales. By showing only selections from the final book - usually coupled with advertisements - the design of the sample copy provided the salesman with an easily portable version (all of the sample copies on display in this exhibit were used to advertise sets of fourteen to twenty volumes). Presumably, the incomplete nature of the sample copy also meant that an effective salesman was free to upsell the perceived qualities of a particular book, since the prospective customer, unable to see the finished product, could only take the salesman at his word. The layout of the sample copy could also be a little misleading on its own: the sample copy usually contained a higher percentage of illustrated pages than would be found in the finished volume. Today, these books allow us to see how editions were advertised in their day.

Aside from the publisher, The Windsor Shakespeare contains identical content to that of The Works of Shakespeare, although the two sample copies offer very different selections from the finished volumes. This sample copy also has a number of advertisements absent from the one issued by Blackwood, Scott and Company. Available only by subscription, this version is, according to its prefatory advertising, available at a cost that “does not exceed that of very inferior editions.” Additional advertisements are interspersed throughout the sample text, deploying similarly overblown language to trumpet the qualities of The Windsor Shakespeare.  The subscribers’ register at the back of this copy is blank; it failed to secure a single subscriber. 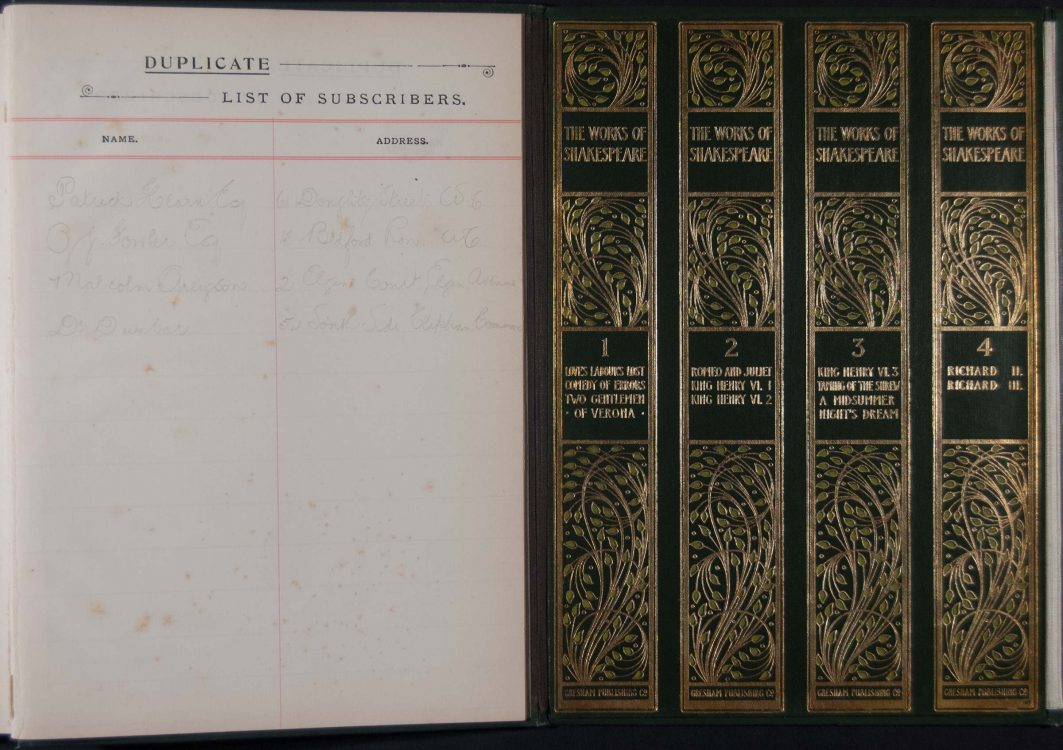 The Henry Irving Shakespeare was available by subscription in fourteen volumes. It was edited, in part, by the famous stage actor, Henry Irving (1838-1905), and his name received top billing as a selling point for the edition. The publishers contended that, as one who had performed and produced Shakespeare’s plays to such great success, Irving had a particularly practical insight into Shakespeare and Shakespeare criticism. The book also included an introduction written by Irving’s assistant and business manager, Bram Stoker (1847-1912), who is now best known for writing Dracula. One of the prefatory ads insists that Shakespeare is far too great and renowned a writer to be “read in a cheap edition.” Rather, “nothing but the Best[,] the very best will serve” for his works; hence, this edition. In the case of this sample copy, the salesman was able to secure five subscriptions.