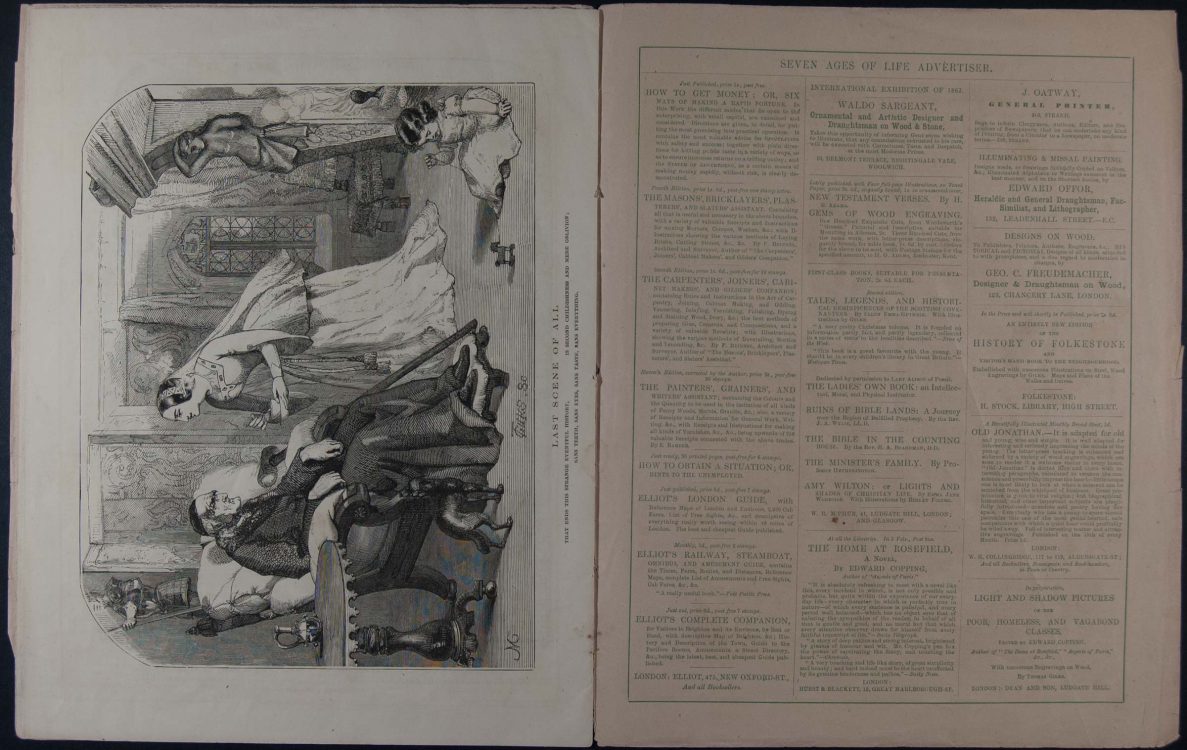 This pamphlet presents illustrations of the seven ages of life as described by Jacques in his “all the world’s a stage” monologue from As You Like It. The illustrations were engraved based on drawings by John Gilbert (1817-1897), a prolific artist who achieved particular success for his Shakespeare illustrations. The pamphlet also includes three pages of the “Seven Ages of Life Advertiser,” which primarily provided advertising space for newly printed books, although it also included a few entries advertising the services of various printers and graphic designers. 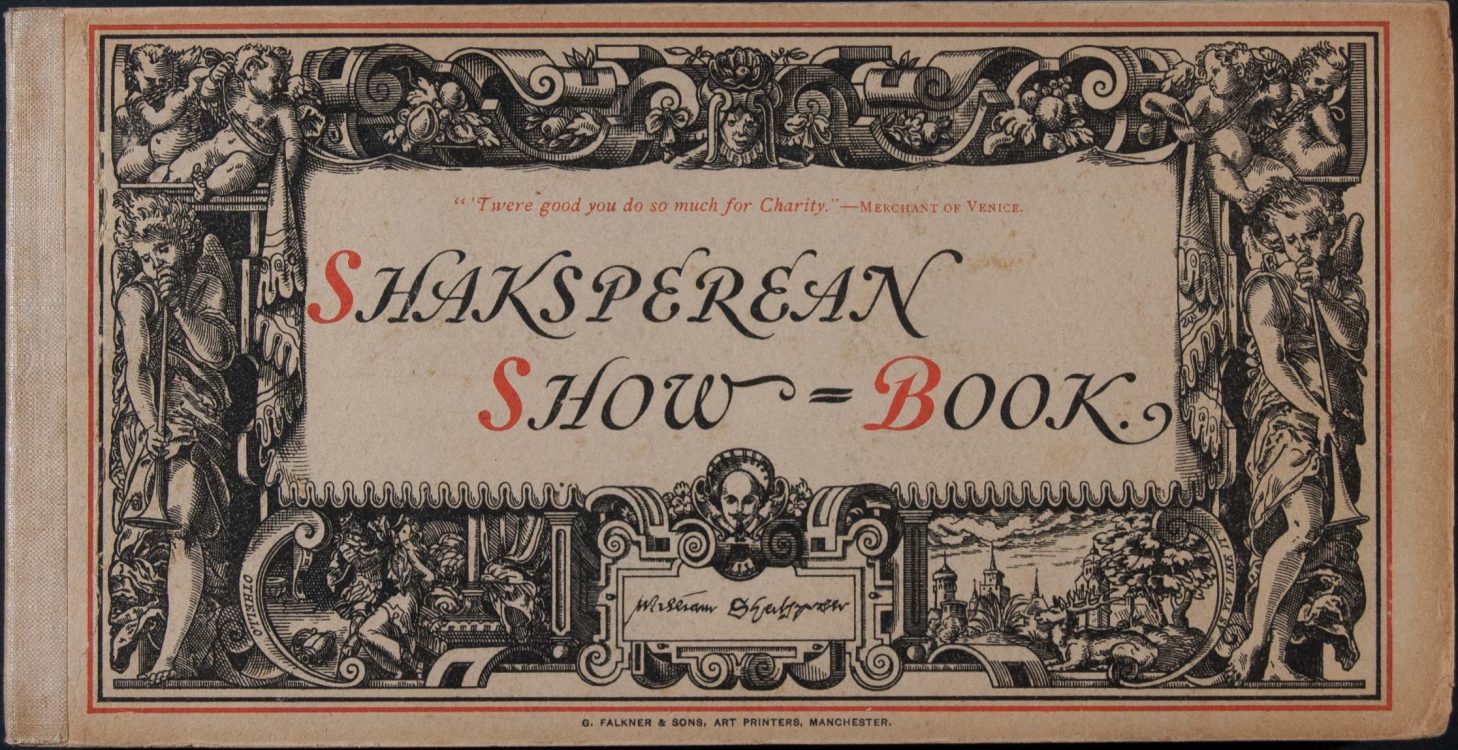 A fundraiser for the Chelsea Hospital for Women, The Shaksperean Show-Book was printed and sold at the “Shaksperean Show” (also a fundraiser for the Hospital) held at Royal Albert Hall from May 29 – 31, 1884. The Show-Book contains a selection of poems and prose related to Shakespeare and his works, along with the program for the Show itself. The Shaksperean Show featured a series of eleven Shakespeare performances and several concerts featuring Shakespeare-inspired songs. Additionally, there was a large exhibit of Shakespeare artifacts and relics on loan to the Show, the contents of which ranged from portraits to alleged Shakespeare artifacts (including a table that he supposedly owned) to early-printed books by, about, or otherwise related to Shakespeare.

The focus of this fundraising, the Chelsea Hospital for Women, was a hospital intended for “respectable poor Women and Gentlewomen in reduced circumstances” suffering from gynecological conditions, “irrespective of character or social position.” The Hospital was operational from 1871 until 1988, when its patients and services were transferred to the Queen Charlotte’s Hospital (now the Queen Charlotte’s & Chelsea Hospital). 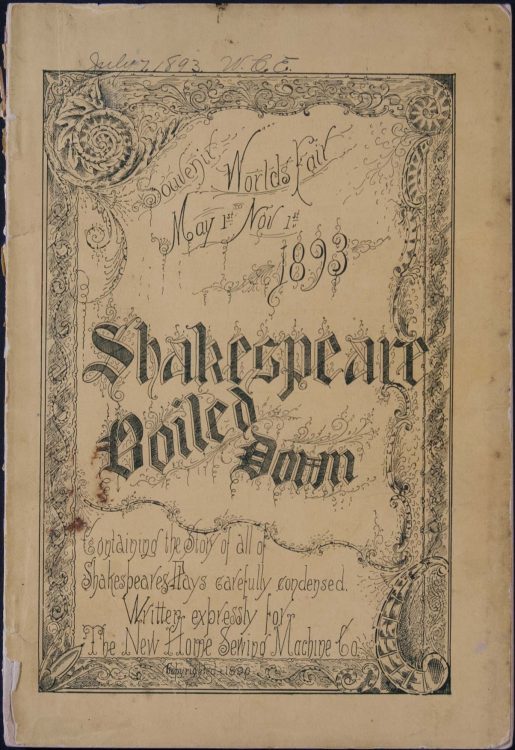 Shakespeare Boiled Down presented a series of abridgements of Shakespeare’s plays. The introduction noted that it would be especially useful for “those who wish to refresh their memory” before seeing a Shakespeare play performed on the stage. The pamphlet first appeared in 1890 and was sold in Chicago for 15 cents. Issued by the Singer Sewing Machine Company, the pamphlet was also intended to serve as an advertisement for its products, with the last five pages describing the various sewing machines that Singer had to offer. (The pamphlet also includes “a word about dogs,” an advertisement for a new breed of greyhound dogs that could themselves be used as advertisement material: one would place an advertisement directly on the dog, using hair dye to create a mobile advertisement.)

This version was given away for free as a souvenir at the World’s Columbian Exposition, a world’s fair that was held in Chicago to celebrate the 400th anniversary of Christopher Columbus’ (1451-1506) voyage to the Americas. The fair’s organizers built an entire temporary city - known as the “White City,” for the color of the buildings’ plaster facades - to house the fair. The Exposition contained some 65,000 exhibits showcasing all manner of arts and technology and featured such innovations as electricity and the Ferris Wheel. This version of the pamphlet also included a page describing the world’s fair and highlighting some of the sights and scenes of interest in Chicago.