Shakespeare and the Private Press V 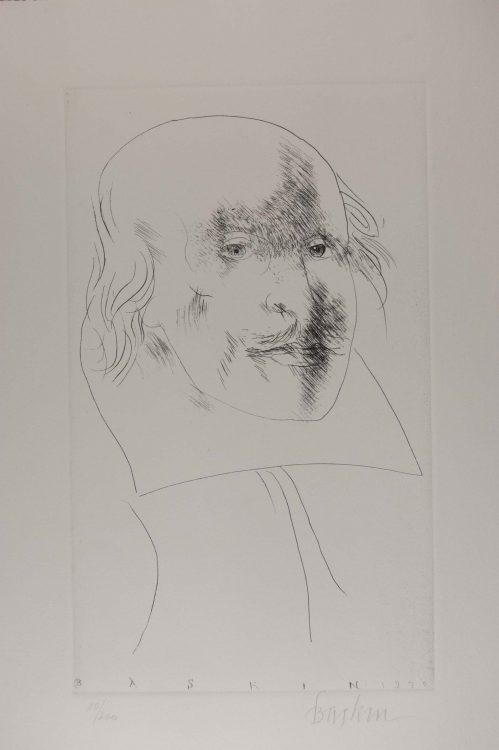 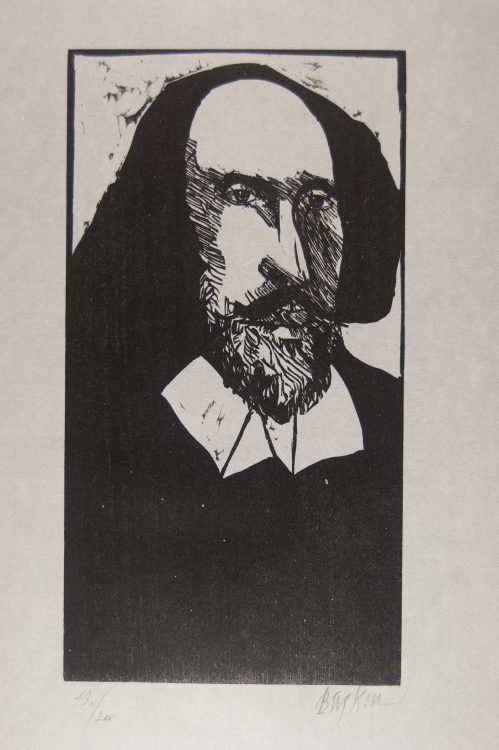 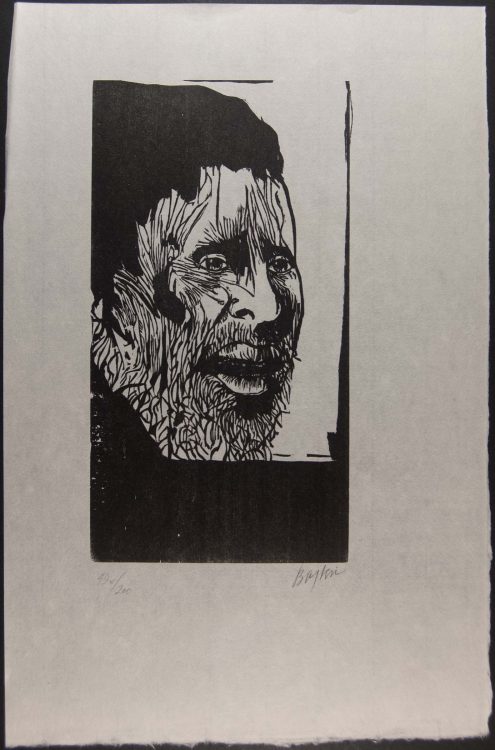 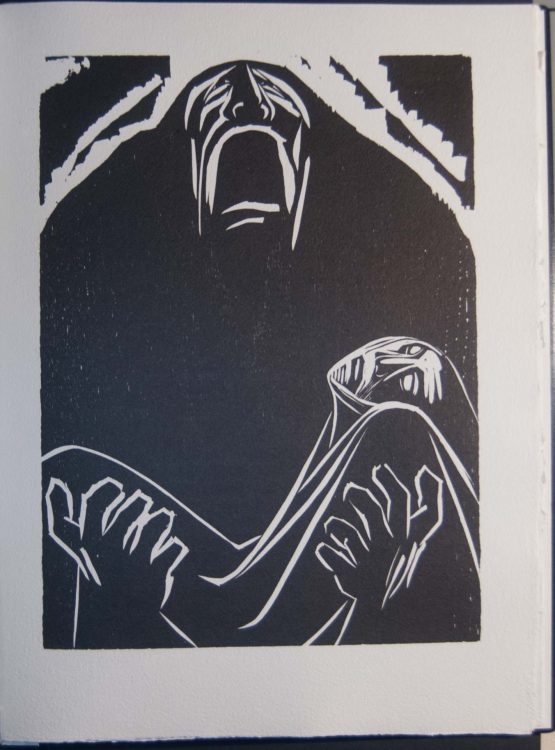 The Theodore Press was founded by Michael Alpert (b. 1945) in 1979. Alpert’s edition of King Lear was printed according to a modernized version of the text of the First Folio, and featured woodcut illustrations by Claire Van Vliet (b. 1933). Van Vliet printed the woodcuts at her own private press, the Janus Press, in Newark, Vermont. Founded in 1955, the Janus Press continues to produce handmade books to this day. 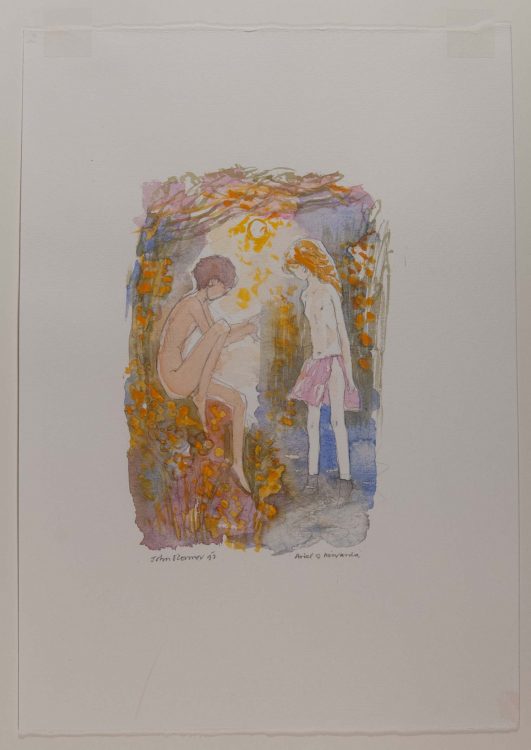 Twenty of the sixty-five printed sets of the Ariel & Miranda engravings included an original watercolor by John O’Connor. The watercolor, though related to the engravings, is not an exact copy of any of them. 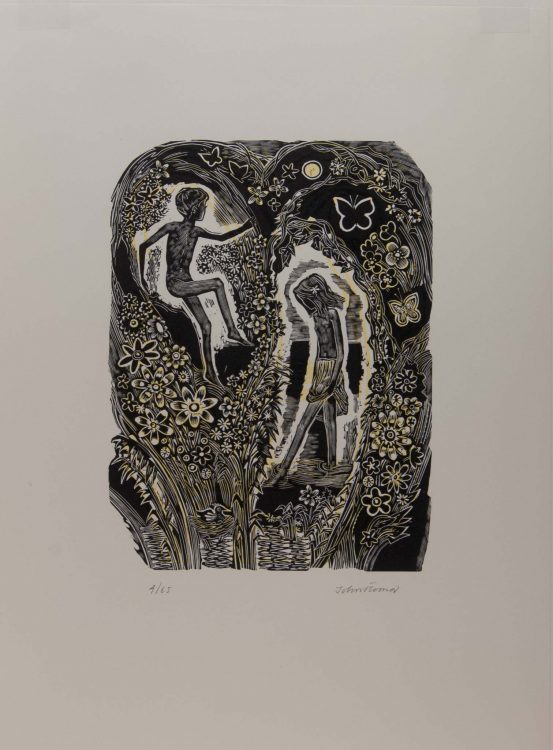 John O’Connor studied at the Royal Academy of Art in the 1930s. Among his teachers was Eric Ravilious (1903-1942), who produced the wood engravings used in the Golden Cockerel Press edition of Twelfth Night. As an artist, O’Connor worked in a variety of mediums, including painting, watercolor, wood engraving, and lithograph. In his introduction to this set of engravings, O’Connor wrote that he had enjoyed The Tempest ever since he had seen it performed in a school production when he was twelve years old.

For these engravings, O’Connor envisioned the interactions between Ariel and Miranda as children, interacting in a sort of brother-sister relationship in the years before the events of the actual play:

“He would be a little wild; she enclosed in that strangely mature innocence that is written into Miranda. Shy at first, the two children would play in streams, collect herbs, flowers and semi-precious stones, happily exchanging gifts, and after a warm summer, gather fruit from the vines. Sometimes Miranda would be ‘watched over’ by the boy, aware of the existence of the unfortunate and potentially dangerous Caliban.”

The Rocket Press, founded by Jonathan Stephenson, operated from 1981 until to 1994, when Stephenson decided to cease printing and focus on art. He is now owner and operator of the Rocket Gallery in London. 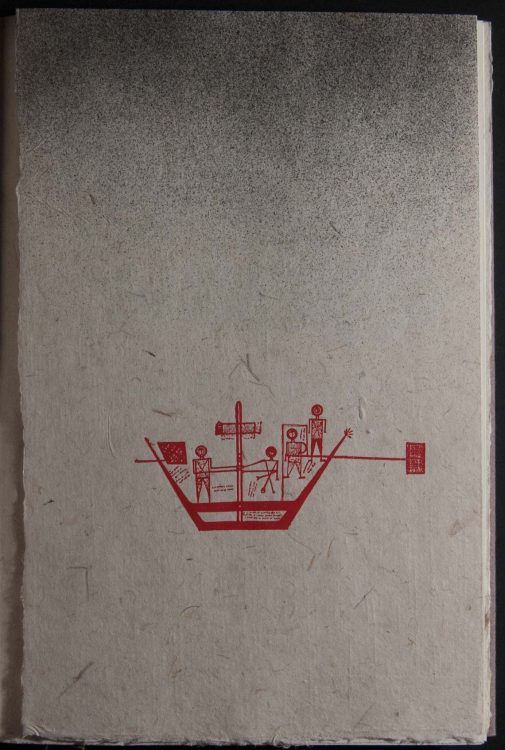 The Caliban Press was founded in 1985 by Mark McMurray, who continues to operate the press. (In addition to his role as a printer, McMurray also works as a special collections librarian and teaches courses on the history of printing.) The Caliban Press edition of The Tempest was printed according to the text of the First Folio, “with few liberties,” according to the publisher’s note in the colophon. 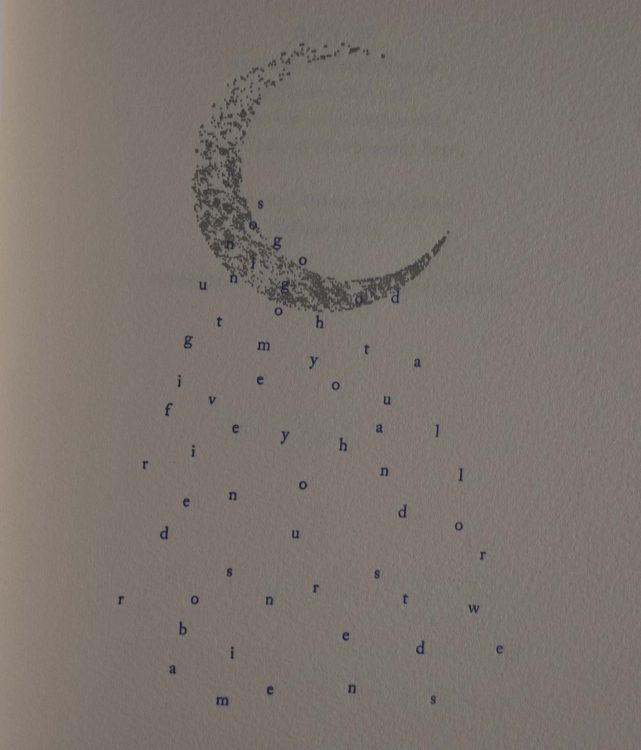 Act V was printed by Harriet Bart’s Mnemonic Press as part of a project that aimed to distribute visual art to “non-traditional audiences.” (As opposed to many of the other private press books on display, which were printed solely using moveable type on a letterpress, Act V was printing using a combination of letterpress and laser print). The book was printed in an edition of 100 copies to accompany a production of A Midsummer Night’s Dream performed by Ten Thousand Things Theater. Active since 1991, Ten Thousand Things is a Minneapolis-based theater troupe that provides free performances for audiences who do not otherwise have easy access to the theater, at venues such as homeless shelters, correctional facilities, and women’s shelters. Copies of Act V were distributed to audience members following performances at Cornerstone, a women’s shelter, and at Wayside, a women’s substance abuse recovery center.