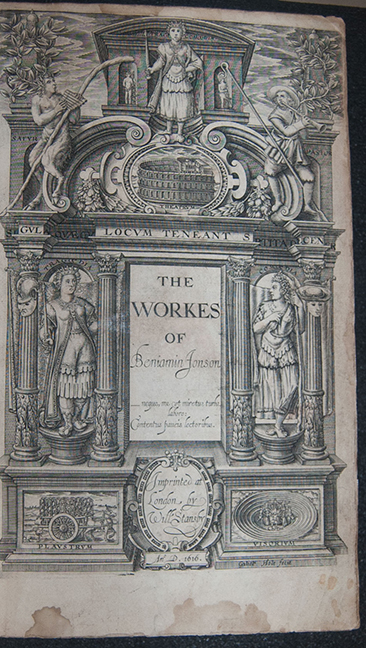 The Workes of Beniamin Jonson. London: Imprinted at London by Will Stansby, 1616.

Ben Jonson was both a friend of and theatrical rival to William Shakespeare. He entered the theater in the 1590s and continued to write until very late in life. Unlike Shakespeare, Jonson stopped performing as an actor once he had established himself as a writer. (Some sources say that Jonson also was not a very good actor, although these accounts may be apocryphal.) Also unlike Shakespeare, Jonson never wrote exclusively for one theatrical company. At times he wrote for and performed with the Admiral’s Men; at other times, he wrote scripts for Shakespeare’s company. (Shakespeare is known to have performed in some of Jonson’s plays.) Jonson’s writings were also a bit more varied than Shakespeare’s - in addition to plays, Jonson produced poems, histories, philology, and translations.

The first folio of Jonson’s Workes, shown here, was printed between November 6 and November 25, 1616. Whereas Shakespeare seems to have shown no interest in publication, Jonson was directly involved in the selection and printing of his Workes. It contained a selection of Jonson’s plays, poems, and masques, most of which had previously been published as individual quarto volumes. Workes was an unusual book for its time. The vast majority of plays went unpublished, and those that were printed only appeared in cheap, smaller-sized editions. Jonson, however, selected the larger (and more expensive) folio-sized format, which was usually reserved for “serious” works. By publishing a self-selected collection of plays and poems in this form, Jonson was thus presenting them as texts worth taking seriously, ones which could be expected to stand the test of time. This was seen as a bit of an odd decision, and he was mocked for it in some quarters. It was also unusual for a living poet to publish a collected works; such volumes usually appeared only posthumously.

This copy of Jonson’s Workes is particularly unique for having once been owned by the great Shakespearean actor, David Garrick (1717-1779), whose portrait can be seen elsewhere in the gallery. The book’s flyleaf bears his inscription, with the note that he received it as a gift from his friend, Palmer, on March 9, 1768. 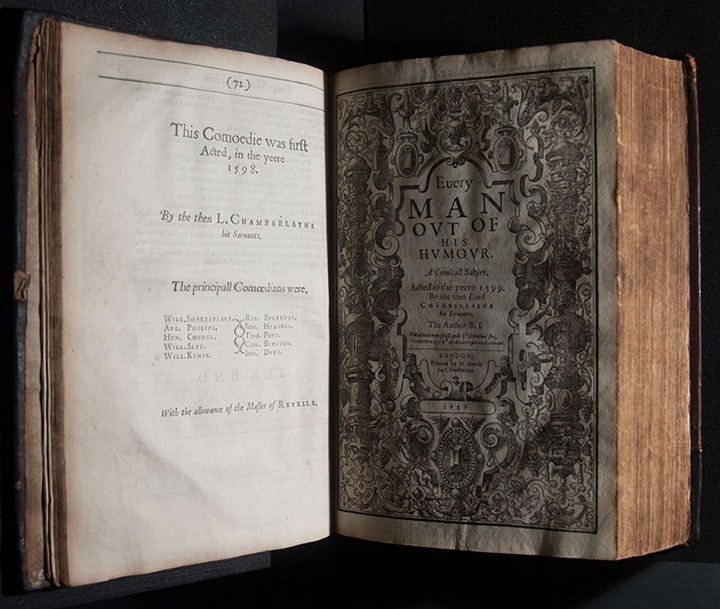 The Workes of Beniamin Jonson. London: Printed by W: Stansby and are to be sould by Rich: Meighen, 1616.

Jonson’s Workes was prefaced with a series of dedicatory poems addressed to Jonson. Although such poems were usually written according to standard forms expected of the genre, they nonetheless provide some insight into Jonson and his circle, for having been written by people who would have known him personally. Among the contributing poets were George Chapman (1559-1634), the translator of Homer; Hugh Holland (1563-1633); and the playwright Francis Beaumont (1584/5-1616), whom Jonson had mentored in the early days of his own theatrical career. Additionally, some (but not all) of the plays were printed with lists of the actors who performed in the plays’ first staging. The cast list for Every Man Out of His Humor, shown here, lists the members of the Lord Chamberlain’s Men, including none other than “Will Shakespeare.” 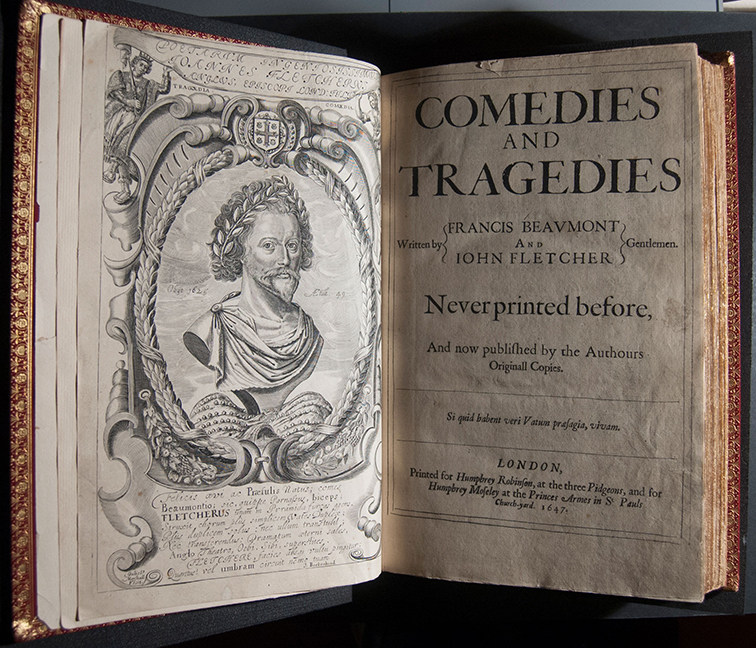 Comedies and Tragedies. London: Printed for Humphrey Robinson, at the Three Pidgeons, and for Humphrey Moseley at the Princes Armes in St. Pauls Church-yard, 1647.

Although little read or performed today, the collaborative playwrights Francis Beaumont and John Fletcher once enjoyed a popularity that rivaled Shakespeare’s. The editors of this volume praised Beaumont and Fletcher as the “best wit ever trod over English stage” and, at the time of the English Restoration (1660), Beaumont and Fletcher’s plays were performed about twice as often as Johnson or Shakespeare’s plays. Beaumont and Fletcher began their theatrical careers independent of each other in the early seventeenth century. Their first dramatic efforts were resounding failures, but the two found great success after they began working together. Unfortunately, there is no evidence as to how their collaboration functioned; it is unclear how they divided their labors or who wrote which portions of any particular play. In this regard, the Beaumont and Fletcher folio is misleading: the book is presented as if all of the plays contained within were written by the two playwrights, when, in fact, some were written by Fletcher alone, and some were written with other collaborators.

Sometime between 1608 and 1610, the two began working for the King’s Men at the Globe Theatre. Beaumont retired from writing around 1613, possibly due to a debilitating stroke. He died three years later and was buried at Westminster Abbey in the “Poet’s Corner,” near Chaucer and Spenser, a testament to his literary standing. Fletcher continued working on his own and with other collaborators, including William Shakespeare, with whom he is believed to have composed Henry VIII, The Two Noble Kinsmen, and Cardenio (a lost play). He also appears to have succeeded Shakespeare as the chief playwright for the King’s Men. In 1625, Fletcher fell victim to the plague, in an outbreak which claimed the lives of about 40,000 Londoners - sources claim that he stayed in London, rather than flee to the countryside, because he was waiting on measurements for a new suit. 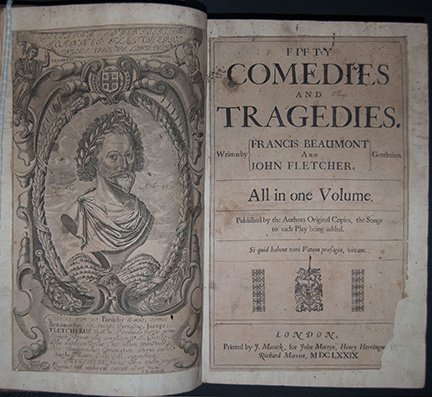 The second folio edition of Beaumont and Fletcher, shown here, included an additional eighteen plays. This edition also included songs that had originally accompanied the plays, but which were absent from the first printing. As with the first edition, the book’s title page claimed that all of these plays were printed based on the authors’ own manuscripts. However, the publisher’s own prefatory material contradicts this claim, as there they said that they had based their text off of a corrected copy of the first Beaumont and Fletcher folio, which had once been owned by an unidentified reader who had known the playwrights and had seen most of their plays performed in the playwrights’ lifetime. (There is no evidence that anything of the sort happened - for the most part, the only noticeable changes are modernizations to the spelling and grammar.) As for the eighteen plays absent from the first Beaumont and Fletcher folio, more recent scholarship has suggested that many of these texts were really just reprints of the quartos. Nevertheless, this volume preserved a great deal of material that had been previously been available only in older, ephemeral editions.

This edition was also the first of any of the folios to include Fletcher and Shakespeare’s collaborative play, The Two Noble Kinsmen. The play had previously appeared in quarto in 1634, but had not been included in the first Beaumont and Fletcher folio or in any of the Shakespeare folios. Interestingly, although the 1634 quarto edition of The Two Noble Kinsmen credited both playwrights (albeit with Fletcher receiving top-billing), this edition omits Shakespeare’s attribution entirely.

The publishers reused the engraving of Fletcher found in the first edition, although they reduced the number of prefatory poems from thirty-seven to eleven. In closing, the publishers also promised that, if this volume proved successful, they would follow up by reprinting the plays of Ben Jonson and “Old Shakespear.” This promise held true, as Henry Herringman (d. 1704) would go on to be one of the publishers involved in producing the 1685 Fourth Folio of Shakespeare and the 1692 Third Folio of Jonson.