Shakespeare and the Private Press II 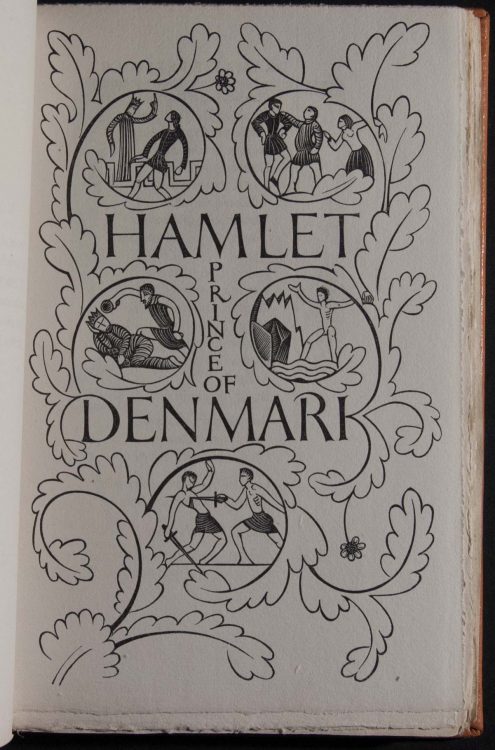 The Limited Editions Club was founded in 1929 by George Macy (1900-1956) with the intent of printing fine editions of the classics, often accompanied by specially commissioned illustrations produced by leading artists of the day. Its books were available only to subscribers and, due to their limited print runs, there was often a waiting list for subscribers. The Limited Editions Club version of Hamlet, shown here, was designed and illustrated by Eric Gill (1882-1940), a type-designer, sculptor, and engraver whose work featured prominently in the Arts and Crafts Movement. 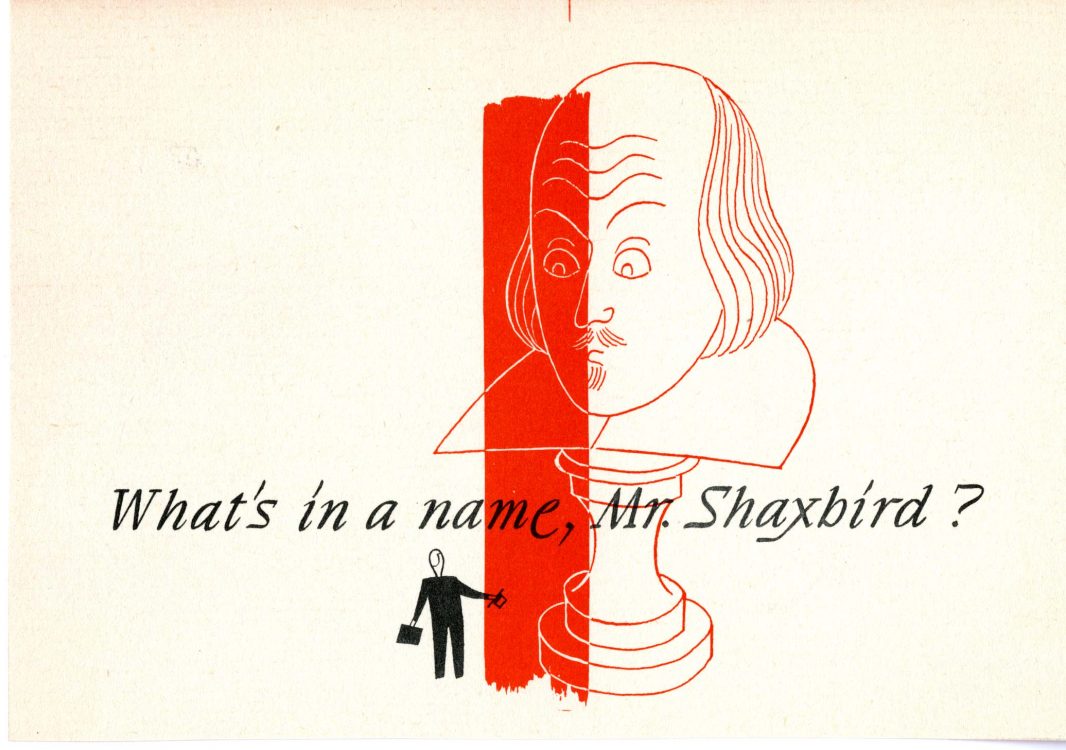 “Shaxbird” (or, “Shaxberd”) was one of the many different ways in which Shakespeare’s name was rendered in writing during his own lifetime. Standardized spelling did not yet exist; hence, any word, even a name, could appear under any number of spelling variations. This card was printed by the Limited Editions Club to accompany a prospectus for its publications for 1939, which included the complete works of Shakespeare. 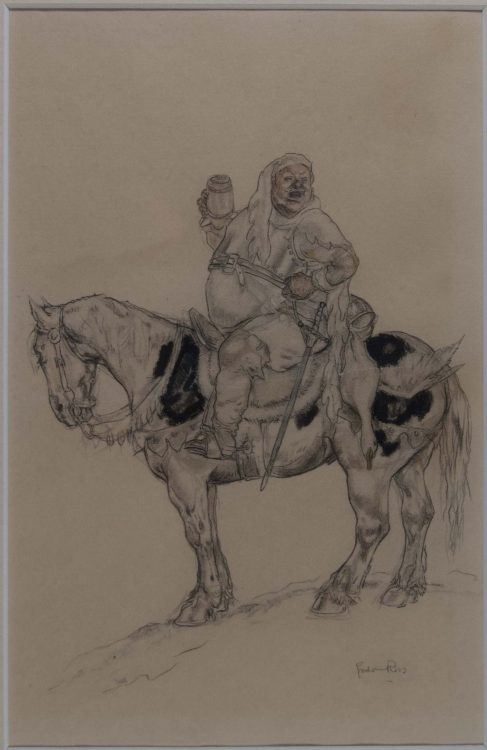 This illustration was reproduced in the Limited Editions Club edition of The Merry Wives of Windsor, as part of their complete works of Shakespeare. Falstaff, a drunken, dissolute knight, appears in The Merry Wives of Windsor as the (unsuccessful) suitor to two (rich) women. Shakespeare had previously depicted Falstaff in the first and second parts of Henry IV, where he appears as a companion to Prince Hal, the future Henry V of England.

The illustrator, Gordon Ross, was born in Scotland and immigrated to San Francisco. From there he moved to New York City, where he found employment as a book and magazine illustrator. Concerning his Falstaff illustration, Ross wrote that:

“For some reason artists have usually been unkind to Falstaff, picturing him as a gross toper sunk in a tavern chair with a huge flagon at hand. A sort of tipsy Santa Claus with a bushy beard and a fatuous grin.

“This is very unfair to good Sir John, as Shakespeare drew him a most energetic man of huge dimensions.

“He was not only that. He was also an amusing and talented liar, an active horseman, and to his own telling, a no less accomplished swordsman, besides being an ardent, if sometimes unsuccessful lover.

“I hope I have succeeded in bringing additional glory to his memory!” 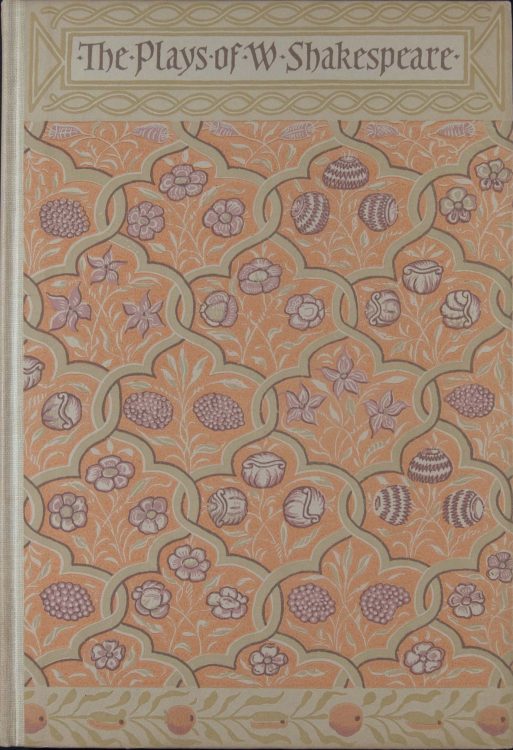 The cover design for each volume reproduced a decoration from the “Painted Rooms” of Oxford, a series of Elizabethan wall paintings found in a fourteenth-century inn. Portions of the inn are still extant, although they have since been incorporated into an eighteenth-century façade. In Shakespeare’s day, the site was known as the Crown Inn. The vintners of the inn, John and Jane Davenant, were friendly with Shakespeare, and he may have stayed there while traveling between Stratford and Oxford. Additionally, the Davenants’ son, William, enjoyed encouraging rumors that he was actually Shakespeare’s illegitimate child. (The wall paintings, which probably date to 1564-1581, were covered up with wood paneling in the early seventeenth century, so its unlikely that Shakespeare ever saw them, as they were not rediscovered until the twentieth century). 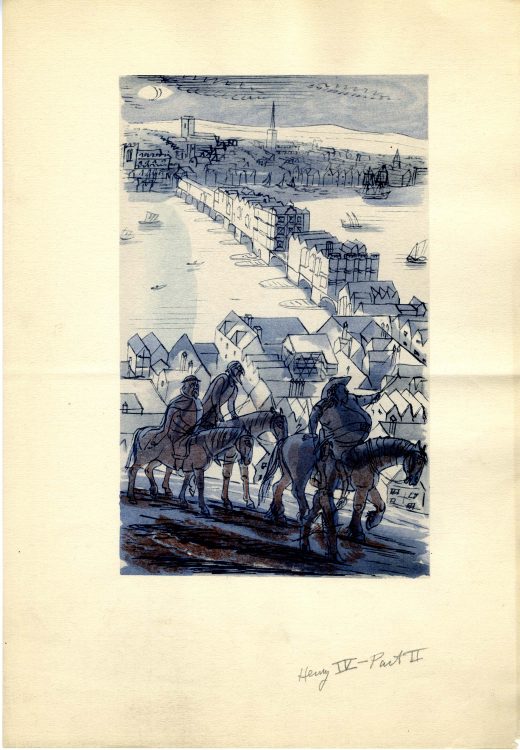 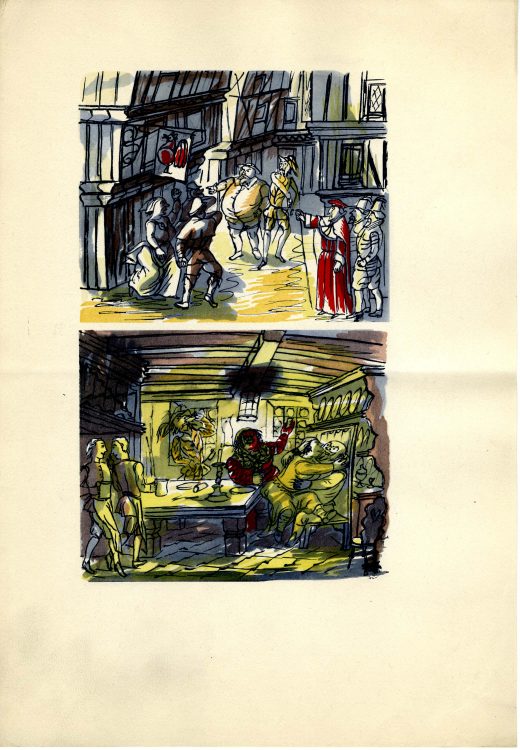 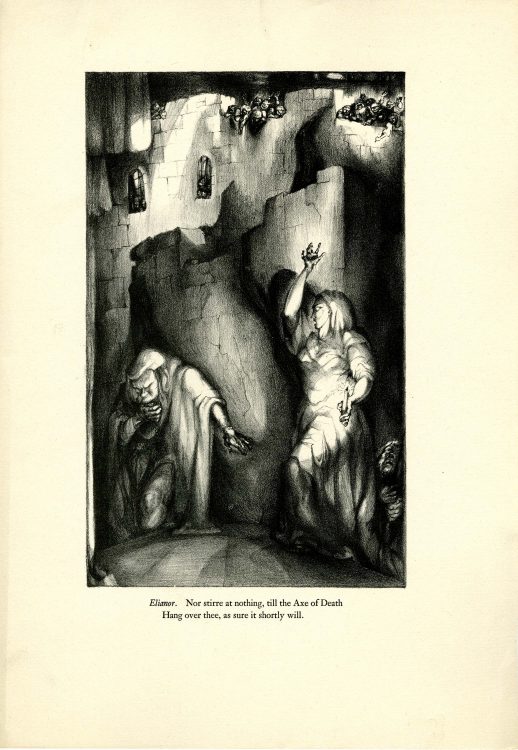 “Elianor: Nothing stirre at nothing, till the Axe of Death…” Proof lithograph for the Limited Editions Club Henry VI, Part II, [ca. 1939]. 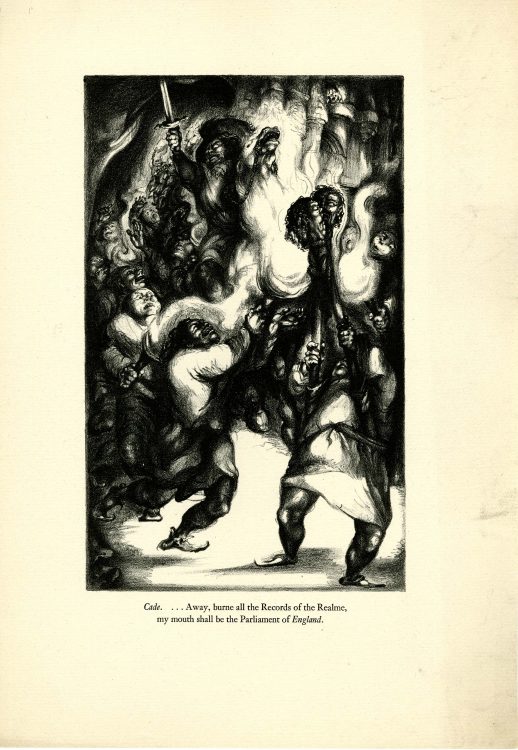 “Cade: …Away, burne all the Records of the Realme…” Proof lithograph for the Limited Editions Club Henry VI, Part II, [ca. 1939].