Shakespeare and the Private Press I 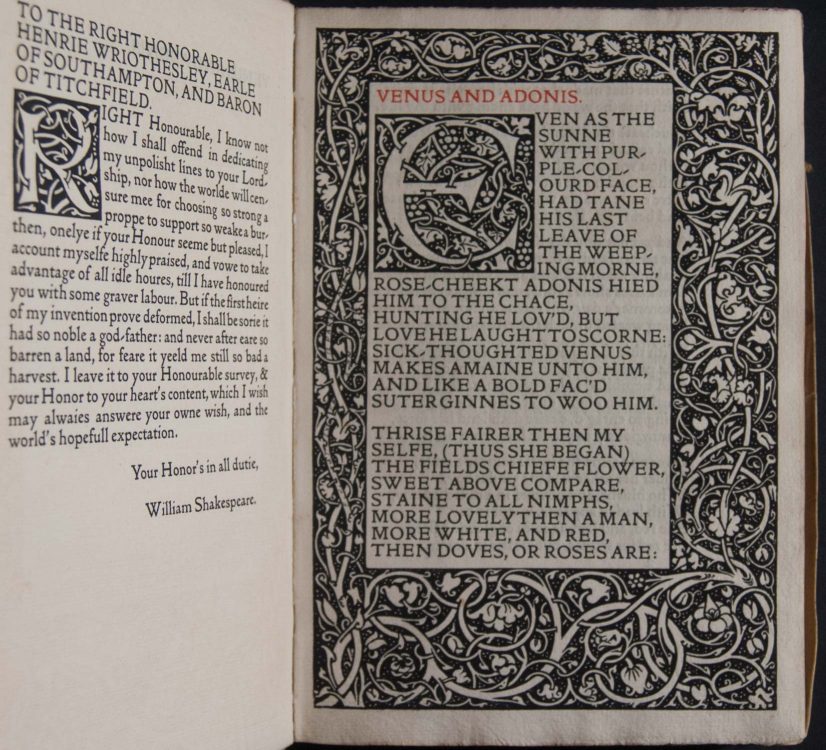 The Poems of William Shakespeare, Printed After the Original Copies of Venus and Adonis, 1593. The Rape of Lucrece, 1594. Sonnets, 1609. The Lover's Complaint. Hammersmith: Kelmscott Press, 1893.

The Kelmscott Press was founded in 1891 by William Morris (1834-1896), a textile designer, author, translator, and socialist activist. Morris, in his latest of many projects, wished to create books that “would have a definite claim to beauty.” Morris drew particular inspiration from the earliest printed books of the fifteenth century, whose aesthetic qualities, he felt, derived in large part from the quality of their typography. In an age when printing was increasingly industrialized for mass-production, Morris’s Kelmscott Press produced books on handmade paper using moveable type and a hand-press, harkening back to the same production methods that had seen medieval and Renaissance books - including the earliest editions of Shakespeare’s works - into print.

Shakespeare’s Poems was the eleventh book produced by the Kelmscott Press, and it proved to be one of its most popular publications. Morris was especially keen on preserving the original texts of medieval and Renaissance works, and so the Kelmscott Poems presented Shakespeare’s verse using the original spelling that had appeared in the sixteenth- and seventeenth-century printings. In his foreword to the edition, Morris stated that “being able to study these poems in the language in which they were written, ought we think, to add materially to the pleasure of the reader.” 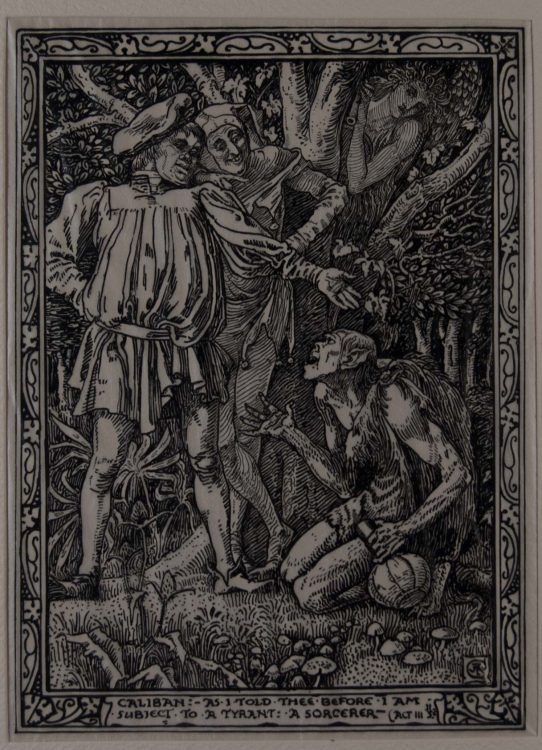 “Caliban. – As I told thee before, I am subject to a tyrant, a sorcerer.” Eight Illustrations to Shakespeare's Tempest. London: J.M. Dent, 1894.

Walter Crane was an illustrator, designer, and painter, as well as a major figure in the British Arts and Crafts Movement. These images were part of a portfolio set of engraved facsimiles reproducing his pen drawings of scenes from The Tempest. The portfolio was a strictly limited edition of 650 copies, and the engraved plates were destroyed after publication. (The set also included a note from the artist stating his belief that the prints “appear to me to be very faithful and successful in preserving the touch & general character of the originals.”) At the time of printing, Walter Crane was widely popular as a commercial artist; just a few years prior, an exhibition celebrating his career had toured the United States and was in the midst of travelling across Europe. The publisher of this portfolio could thus expect that Crane’s prints would sell well as a limited-edition commercial item. 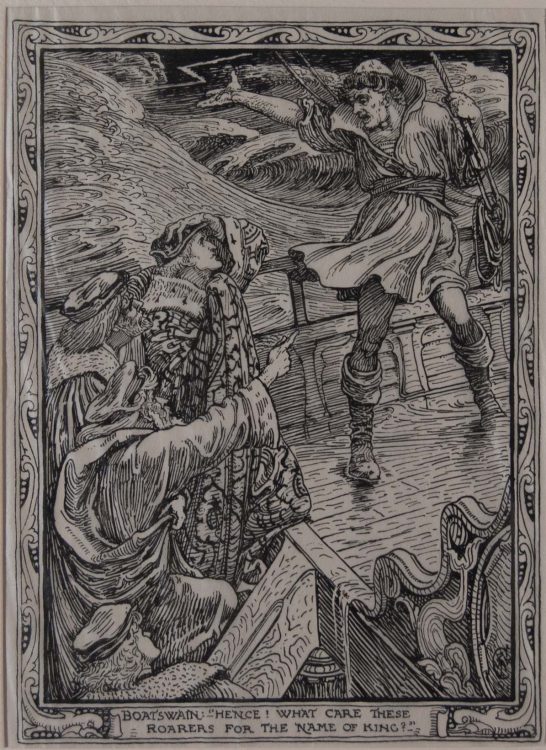 “Boatswain – Hence! What care these roarers for the name of king?” Eight Illustrations to Shakespeare's Tempest. London: J.M. Dent, 1894. 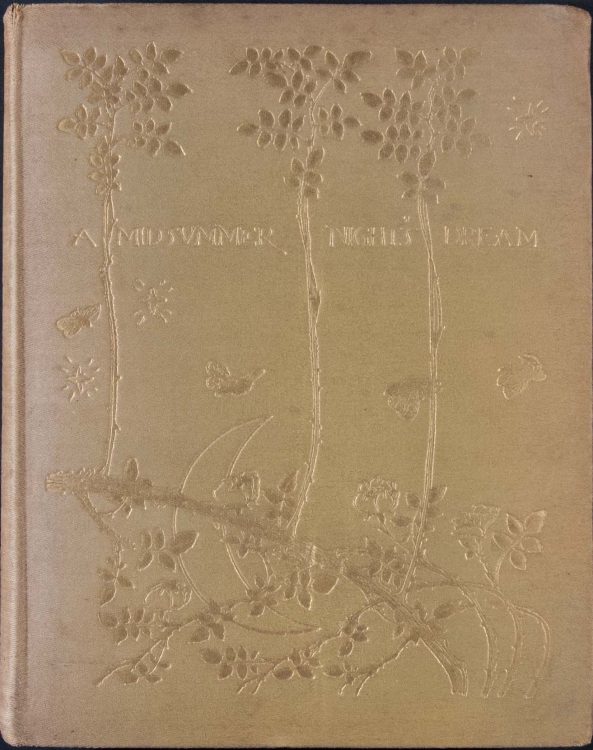 J. M. Dent’s edition of A Midsummer Night’s Dream featured illustrations and designs by the artist Robert Anning Bell (1863-1933). The introduction to this edition by Israel Gollancz (1863-1930) was addressed specifically to a juvenile audience and presented A Midsummer Night’s Dream as a “wonderful fairy tale” by “the greatest of all the poets that have ever lived, God’s best gift to England, England’s to the world.” (Dent would later go on to found the Everyman’s Library in 1906, with the intent to produce inexpensive, well-edited, beautifully designed editions of the classics.)

The Poems of William Shakespeare, According to the Text of the Original Copies, Including the Lyrics, Songs, And Snatches Found in His Dramas. [London:] Essex House Press, 1899.

The Essex House Press was founded in 1898 by Charles Robert Ashbe (1863-1942) as a part of his Guild of Handicrafts, an Arts and Crafts Movement workshop and craft school. The press was established using much of the same staff and presses that had previously been employed by William Morris’s Kelmscott Press. The Essex House Press remained active until 1910, when it closed due to poor sales and financial troubles. The Essex House edition of Shakespeare’s Poems, shown here, was edited by F. S. Ellis (1830-1901), a bookseller and author. Ellis had been a close friend of William Morris, as well as a strong supporter of the Kelmscott Press. This particular copy was a gift from Ellis to his wife, Caroline Augusta Flora. 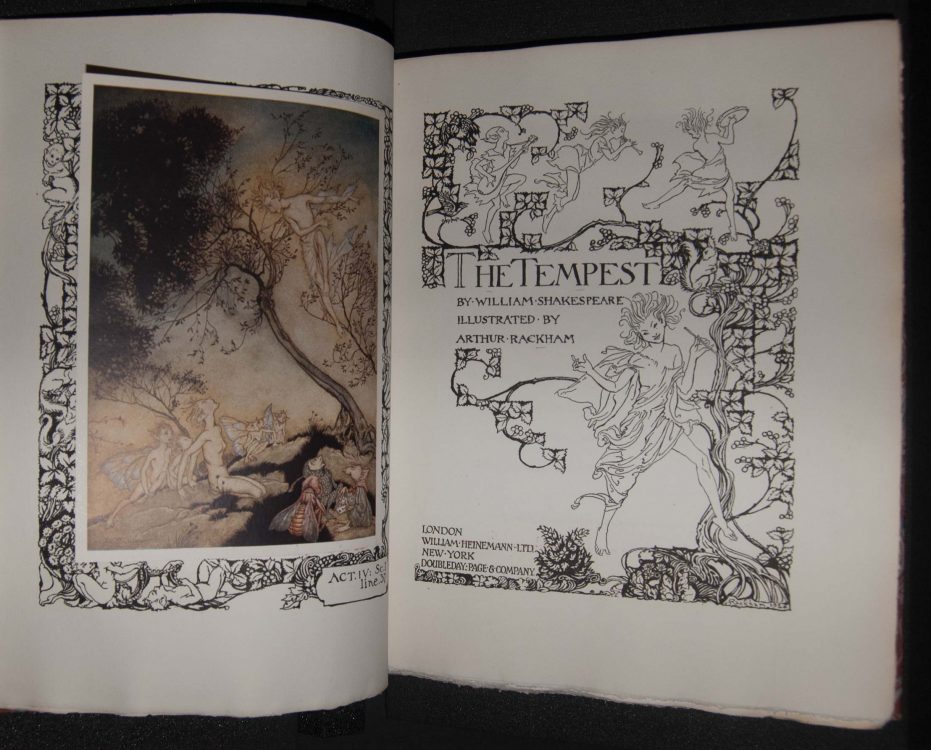 The Heinemann edition of The Tempest was issued as a mass-market edition and as a limited edition of 520 copies on handmade paper. A copy of the limited edition is shown here. The Tempest featured illustrations by Arthur Rackham (1867-1939), an artist who enjoyed great popular acclaim and commercial success for his book illustrations. Rackham’s illustrations for The Tempest focused on the more fantastic elements of the play, with the play’s human characters generally ignored in favor of the play’s supernatural creatures.

The Cranach Press was founded in 1913 by Harry Kessler (1868-1937), a German aristocrat, scholar, diplomat, and patron of the arts. The Cranach Press ceased operations during the First World War - almost all of its staff were drafted into military service - and then resumed productions in 1925. The Cranach Press employed many artists from England and France, and many of the Cranach Press books were simultaneously printed in German, French, and English editions.

Kessler’s edition of Hamlet printed a new German translation by Gerhart Hauptmann (1862-1946). In addition to Shakespeare’s translated text, Kessler also included the sources for Hamlet, which were printed wrapped around the text of the play.The book featured woodcut illustrations by Edward Gordon Craig (1872-1966), an English wood engraver, actor, and set designer. The woodcuts were based on set designs that Craig had previously used for a Moscow Art Theatre production of Hamlet in 1912. The page layout was done according to Kessler’s own design, with the intent to present the multiple texts and illustrations in a unified form, so that each part would be integrated into an artistic whole on the page. The resulting book was widely praised for its aesthetic qualities; at the 1929 Leipzig book exhibition, it was lauded as the most beautiful book printed that year. Decades later, in 1962, Walter Tanz, one of the type compositors at the press, called it his “greatest satisfaction at the press.” (Tanz also recalled that the process of actually fitting the woodcuts in with the type made for especially challenging work.)

The Cranach Press also served to erode Kessler’s already dwindling fortunes. Although his books were widely praised, the cost of running the press far outpaced any profits made from book sales, especially in the wake of the Great Depression. In 1931, Kessler shuttered the press. Two years later, following the rise of Hitler, Kessler fled Germany for France. In 1937, while in exile, Kessler attempted to revive the Cranach Press - one of his plans was to print Shakespeare’s complete works, again with illustrations by Craig - but Kessler’s ill-health made this task impossible.

The Cranach Press Hamlet, Edited From the Text of the Second Qvarto, [publisher’s prospectus, 1930].

The Cranach Press issued an English edition of Hamlet two years after printing the German translation. For this version, Kessler’s editor, J. Dover Wilson (1881-1969), used the text of the 1604 second quarto edition of Hamlet. Wilson believed that the quarto edition, having been printed during Shakespeare’s lifetime, was the closest one could ever get to what Shakespeare had actually written. Kessler had intended to produce a French translation as well, but this project never materialized as Kessler was unable to secure a translator. 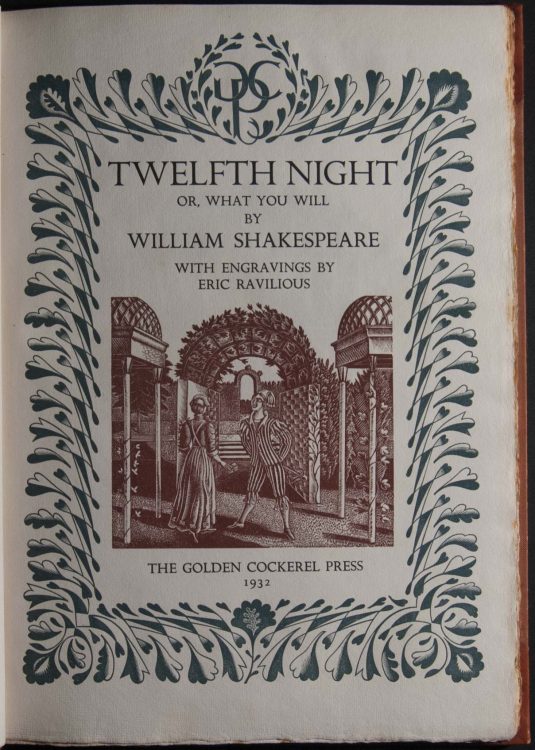 Twelfth Night Or, What You Will. Waltham Saint Lawrence, Berkshire: Golden Cockerel Press, 1932.

The Golden Cockerel Press was founded in 1920 by Harold Midgley Taylor (1893-1925), as a cooperative project between the craftsmen involved in printing and publishing its books. He ran the press until 1924, when ill health left him incapable of continuing operations. Taylor sold the press to Robert Gibbings (1889-1958), a wood engraver who had previously supplied illustrations for some of Taylor’s publications.

The Golden Cockerel edition of Twelfth Night, which was produced while Gibbings owned the imprint, was first suggested by Eric Ravilous (1903-1942), who produced the engraved illustrations for the book. The resulting book took two years to produce. Although the Golden Cockerel Press had enjoyed significant commercial success under Gibbings’ leadership, the worldwide economic depression took a toll on the Press’s sales. In the case of Twelfth Night, the book was scaled back from a planned edition of 500 copies to a smaller print run of 275 copies. Even then, the book sold slowly. By 1933, with business growing increasingly worse, Gibbings opted to sell the press. Its next owner, Christopher Sandford (1902-1983), printed under the Golden Cockerel imprint until 1959, when he sold it to its final owner, Thomas Yoseloff (1913-2007). Ravilous’ own career was cut short by the Second World War: in 1939 he was selected as an Official War Artist, and in 1942 he perished in a plane crash in Iceland while serving with the Royal Marines.