Previous
Online Exhibitions   »   Shakespeare Through The Ages   »   The Tercentenary 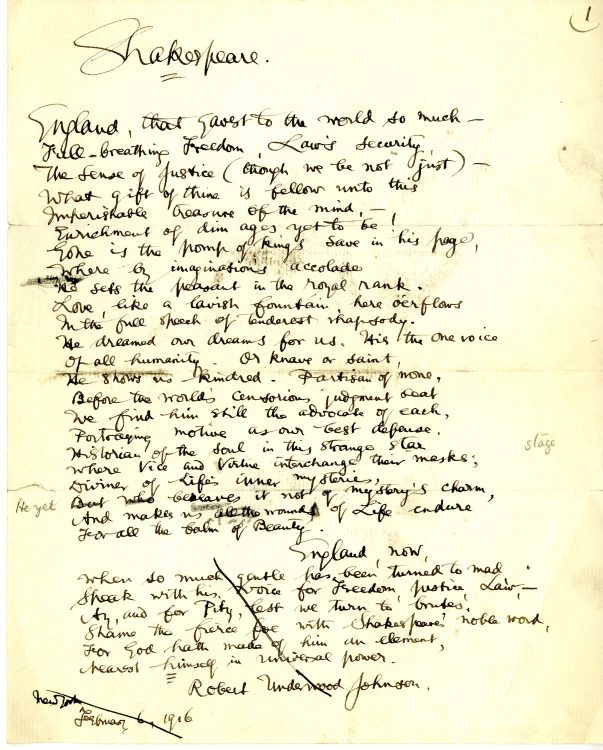 Robert Underwood Johnson was an American poet, editor, and diplomat. He often produced commemorative verses in honor of significant persons and occasions and was sometimes referred to as the “unofficial poet laureate of the United States.” He wrote this poem in honor of Shakespeare at the request of the British Committee of the Shakespeare Tercentenary Commission. As with many of the commemorative pieces produced for the occasion, Johnson (though himself an American) wrote of Shakespeare as a distinctly national hero, a source of patriotic pride and an exemplar of English civilization and culture. The First World War was in its second year, and many of the tributes produced for the tercentenary presented Shakespeare specifically in this light. Shakespeare was cast as a source of national identity, both to inspire the English at arms and to highlight their supposed moral and cultural superiority against Germany and the Central Powers. That said, the Germans celebrated the tercentenary with great enthusiasm too, and any number of celebrants chose to place Shakespeare in the service of all sorts of causes. The Daily Mirror quipped that “by an inevitable accomplishment of human egoism, nearly all of those who have written about him have proved that Shakespeare was like them.” 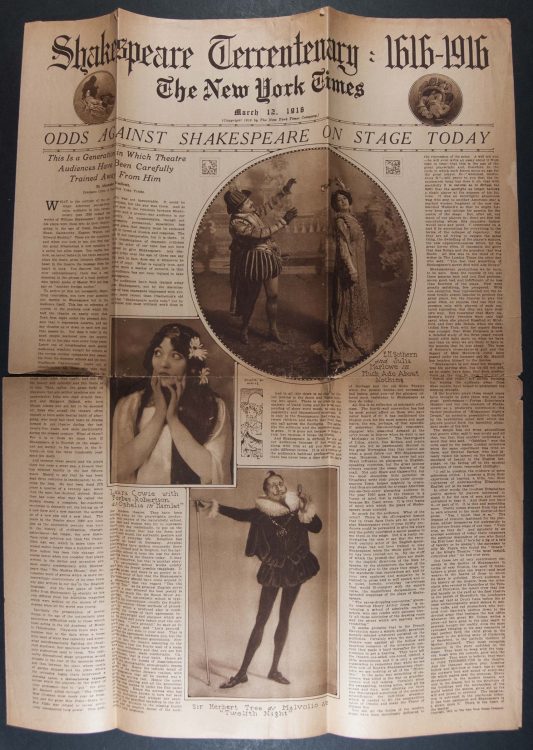 To commemorate the 300th anniversary of Shakespeare’s death, the Sunday edition of the New York Times included a series of ten Shakespeare Tercentenary supplements, each of which printed a mixture of new and old Shakespeare-related articles, including poems, criticism, and other essays related to Shakespeare and his works. The leading article in this supplement, “Odds Against Shakespeare On Stage Today,” was written by Alexander Woolcott (1887-1943), a dramatic critic for the New York Times. Woolcott argued that “this is a generation in which theatre audiences have been carefully trained away from” Shakespeare. He wrote that the naturalistic, prose dramas of the day were creating audiences who could not appreciate Shakespeare, as well as actors who could not perform suitable Shakespearean roles. “The imagination is subvened in the playhouse today,” he concluded. “It has been pampered and Shakespeare is a strain upon it.”

Elsewhere in the supplement are articles on the ways in which various actors had interpreted Shakespeare’s characters, an essay by John Quincy Adams (1767-1848), on the ways in which the theaters of his day had mangled Shakespeare by revising the text (he wrote with particular contempt about the happy ending that had been assigned to King Lear), and a reprint of Ben Jonson’s “To the Reader” poem, as had appeared in the First through Fourth Folios. Meanwhile, the front page for the New York Times of March 12, 1916, contained news of the First World War and the Mexican Revolution, with reports on the Battle of Verdun and General Pershing’s (1860-1948) pursuit of Pancho Villa (1878-1923) along the Mexican border. 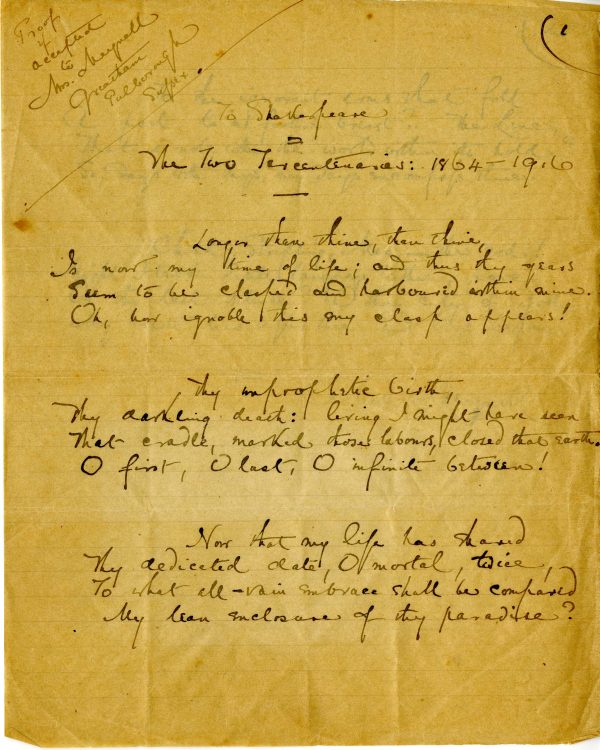 Alice Meynell was an English poet and essayist. She composed this poem in commemoration of the 300th anniversary of Shakespeare’s death at the behest of the British Academy. In it, she reflects on the fact that, at her age, she had already lived a longer life than Shakespeare had. She later referred to the poem as “my one, one masterpiece.” The poem was printed in the newspaper The Observer with a slightly different title. The following year it was also printed in Meynell’s poetry collection, A Father of Women, and Other Poems, under the title “The Two Shakespeare Tercentenaries.”

Previous
Online Exhibitions   »   Shakespeare Through The Ages   »   The Tercentenary