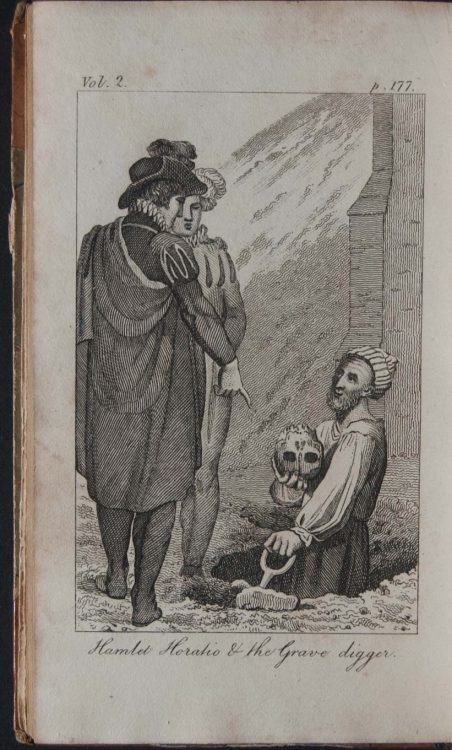 Tales From Shakespear, Designed for the Use of Young Persons. London: Printed for M.J. Godwin and Co., at the Juvenile Library, 1816.

Charles and Mary Lamb’s Tales from Shakespear presented prose retellings of Shakespeare’s plays, in language intended for children. Their introduction noted that Shakespeare’s own words were incorporated into the stories when possible, so that readers could get a sense for his style, though much of his vocabulary was simplified in order to eliminate unfamiliar or otherwise confusing language. The Lambs also stated that the book was especially intended for young women, on the basis that “boys are generally permitted the use of their fathers’ libraries at a much earlier age than girls are.” The prevailing gender biases of the day are also evident in the way in which the book and its authorship were advertised: although Mary Lamb actually wrote the majority of the book (fourteen of the tales were her’s; six were Charles Lamb’s doing), only Charles Lamb was credited on the title page.

First published in 1807, Tales From Shakespear enjoyed great popularity. The third edition, shown here, included engravings by the artist and poet, William Blake (1757-1827), which were designed based upon illustrations by the painter William Mulready (1786-1863). 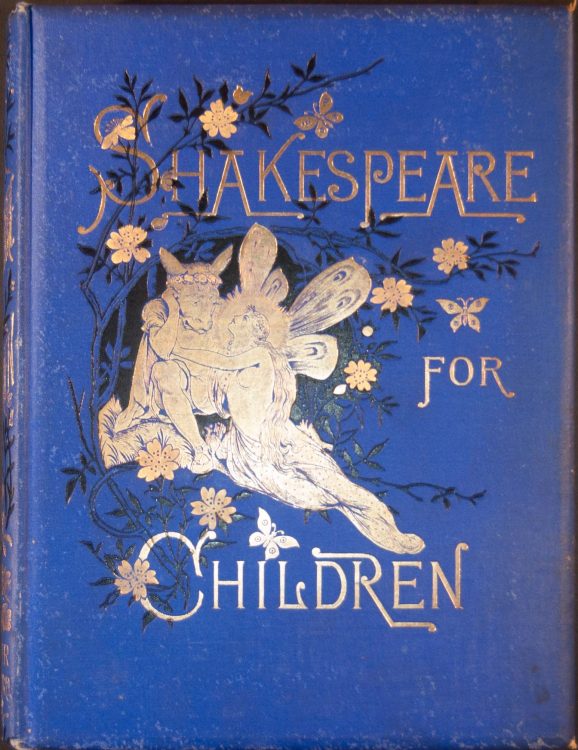 This edition of the Lambs’ Tales appeared as part of a series of classics rewritten for a juvenile audience. The other entries in the series include “Chaucer for Children” and “Spencer for Children.” Here, not only were both of the Lambs credited for their contributions, but the publishers also noted whose tales were whose, making it clear that Mary had contributed significantly more to the book as a whole. This edition also included color and black-and-white illustrations by John Moyr Smith (1839-1912), a Scottish artist and designer who produced such varied work as furniture, illustrations, and ceramic tiles. 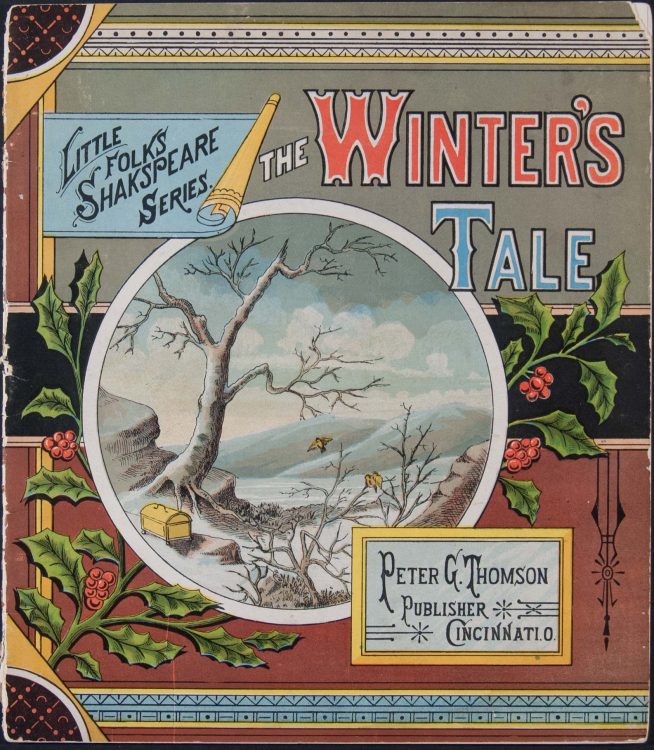 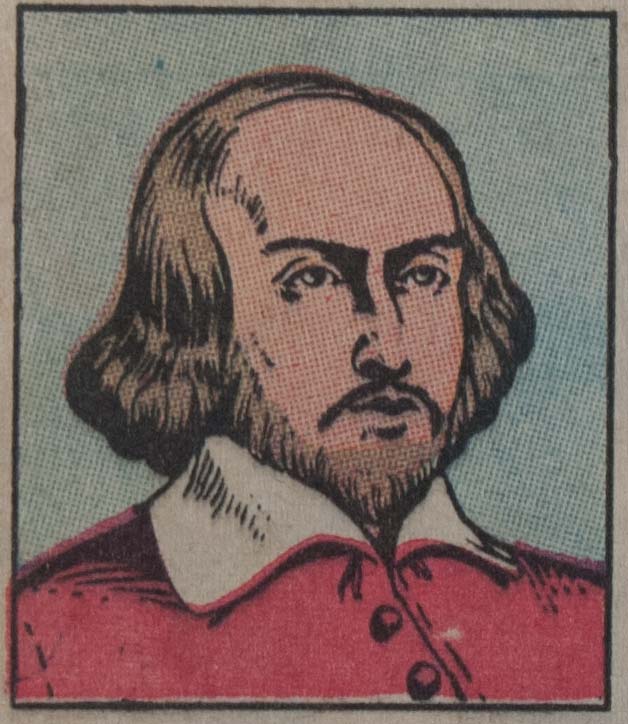 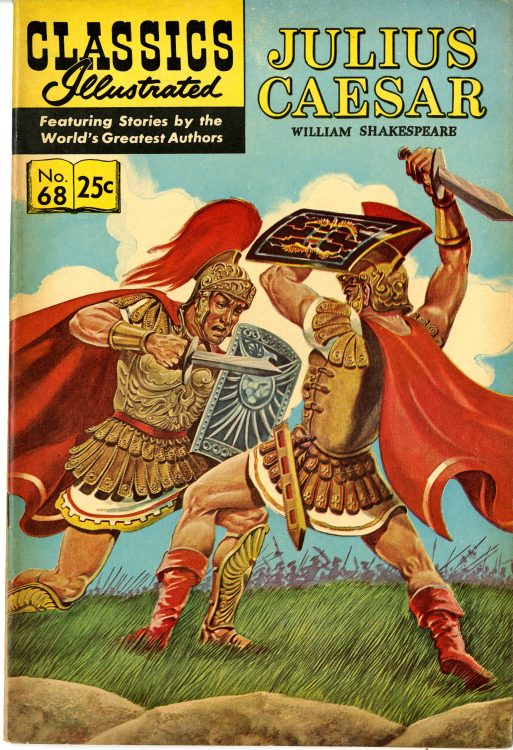 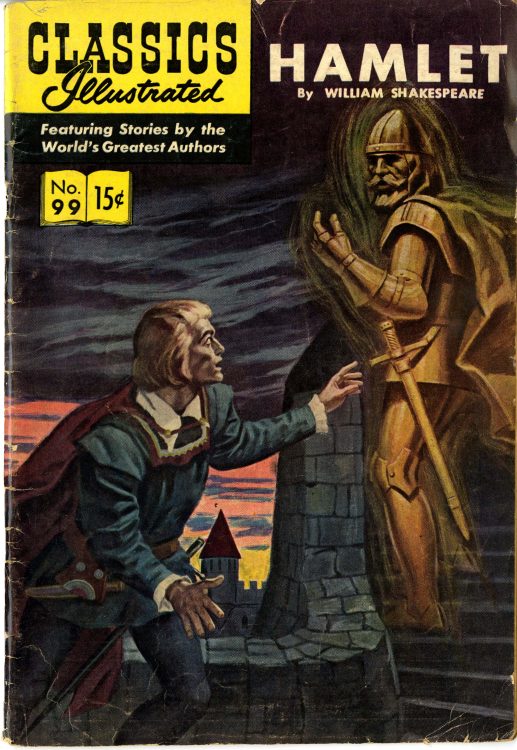 Classics Illustrated was created by Albert Lewis Kanter (1897-1973) and first published by Gilberton Company in 1941 under the name Classic Comics. The series was renamed as Classic Illustrated in 1947 to distance the series from other comic books, which were under increasing attack from educators and the general public, many of whom feared that comics were immoral and harmful to young readers. In creating the series, Kanter intended to use the relatively new comic book format to introduce younger readers to the classics of literature. Some newspaper comic strips had presented similar adaptations, but Classics Illustrated was the first full-length comic book series to do so. The series was immensely popular, so much so that many issues went through as many as twenty printings at a time when comic books usually went through only one printing.

In the Classics Illustrated adaptations of Shakespeare, Shakespeare’s own words appeared as dialog in the character’s speech balloons, with occasional descriptive passages being supplied by the editors to move the action along. The editors also supplied footnotes defining Shakespeare’s more obscure words. In some cases, the layout of these comic books could become a bit awkward when the editors tried to accommodate Shakespeare’s more lengthy bits of dialogue. For example, Hamlet’s entire “to be or not to be” speech is presented in full in a single speech balloon.