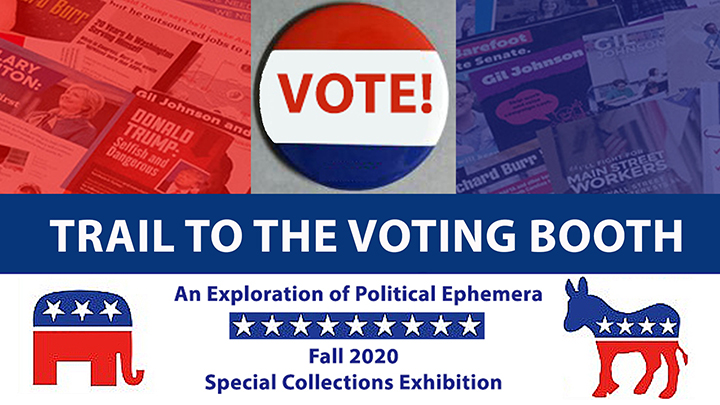 Voting is the most important expression of civic engagement in America. There are over 500,000 elected officials across the United States, from President to the local dogcatcher (Duxbury, Vermont elects their dog catcher every year). The contours of a political campaign are familiar to all: speeches, debates, rallies and party conventions, culminating when Americans gather to cast their ballots in November. With the votes tallied, winners prepare to take office and unsuccessful candidates return to private life. But what do these campaigns leave behind after Election Day?

Trail to the Voting Booth: An Exploration of Political Ephemera shows the variety of ways Americans talk about politics and the way these discussions manifest in physical objects. From Farmer Refuted, Alexander Hamilton's 1775 pamphlet on the political relationship between Great Britain and the American colonies, to campaign websites from the 2018 election cycle, Americans enjoy discussing politics, sharing their opinions about candidates and public issues, and tracking the election process every two years. This political dialog has taken many physical forms over the last 240+ years, including pamphlets, song sheets, cartoons, buttons, campaign signs, bumper stickers, costume jewelry, housewares, clothing, toys and more. In the moment, they allow people to proudly display their support for causes and candidates, and later serve as a memory of elections past.

NOTE: Additional items may be added to this exhibition. Check back to see what's changed!

This Special Collections exhibition, curated by John Caldwell, Coordinator of Political Papers and Electronic Records, launched online in September 2020 and will be on view during spring semester 2021 in the Special Collections Gallery of Morris Library.