Campaign buttons are one of the most iconic pieces of campaign ephemera. Buttons date back to George Washington’s first inauguration in 1789. These were actual clothing buttons and fasteners, where function was as important as displaying support for a candidate. 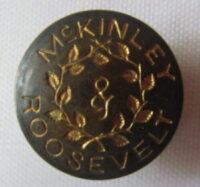 The next development in what we would consider a campaign button came in the mid-nineteenth century with advances in photography. Ferrotypes, also known as tintypes, were small photographs developed on thin sheets of coated iron or tin, becoming popular in the U.S. during the 1850s. These durable and inexpensive images were popular for use as lapel pins, displaying a candidate’s visage. Some of the most well-known tintype pins date to Abraham Lincoln's 1860 and 1864 elections. 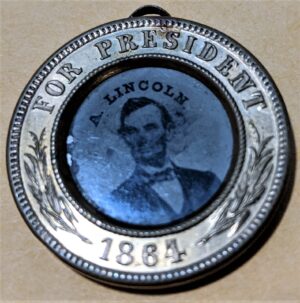 The first “modern” campaign button appeared during the 1896 presidential election between William McKinley and William Jennings Bryan. These buttons were made of celluloid, the world’s first synthetic plastic-like material. In the 1870s and 1880s, some celluloid buttons were made by molding a candidate’s face onto a solid piece of celluloid. In the 1890s, a new production method was patented, using a thin sheet of celluloid to protect the image printed on paper. These were wrapped around a metal disk with a pin on the back. With this newer, cheaper production process, the modern campaign button was born. This is essentially the same process used to manufacture campaign buttons today. 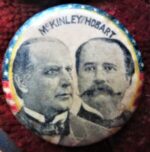 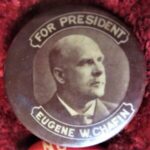 In the 1920s, a cheaper production method replaced the “golden age” cellulose buttons. Images were printed directly on thin pieces of metal that would be punched out and shaped into a button. These new buttons, called lithograph buttons after the printing process used to create them, were common throughout the twentieth century, and are still common today. One refinement to this design came in the 1980s, when the button surfaces were coated in a thin layer of plastic to protect the image from being scratched. 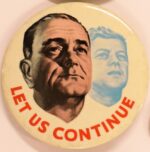 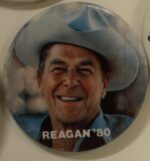 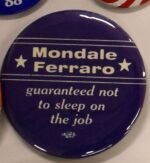 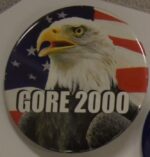 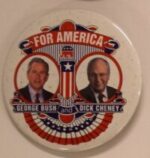 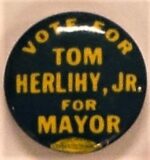 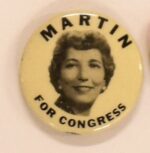 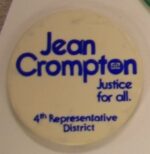 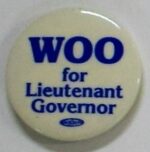 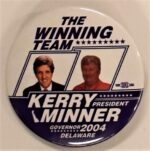 Other button styles have also developed over time:

Tabs: These are some of the simplest campaign buttons, with a small image or text printed on a flat piece of tin, with a strip that can be folded behind, keeping the button in place. 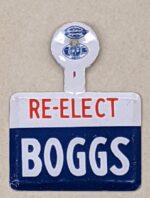 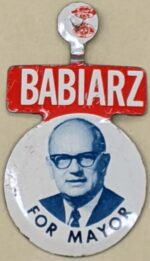 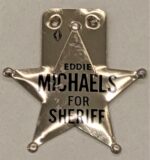 Flashers: These buttons contain two images that change depending on the angle at which you see the button. These were popular in the 1950s-1970s. 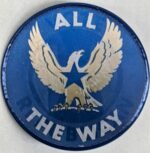 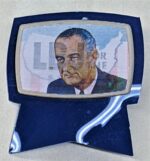 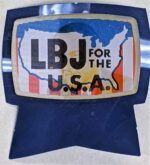 Lapel pins/studs: These are simple pins, usually painted or laminated on metal disks with a spike on the back secured by a clasp. 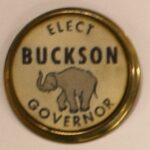 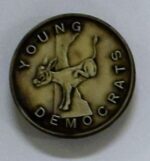 Electronic buttons: Some buttons have moving parts or flashing lights, adding some flair to the button. 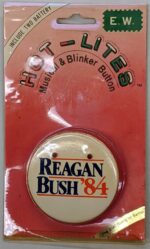 Buttons are not limited to political candidates, but also for political parties and specific policy issues. Novelty, satirical, and homemade buttons of a political nature are also common. 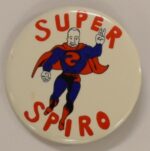 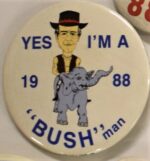 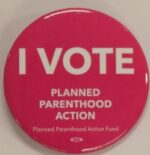 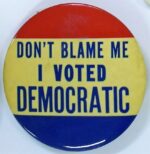 Today, campaign buttons are created for candidates seeking local, state, and federal office, made to show support for important civic issues, and as fun pieces of memorabilia. These are among of the most common, and iconic, pieces of political ephemera in American culture.