Pamphlets are brief, unbound publications. With the explosion of the printing in the early sixteenth century, pamphlets became a dominant form of printed communication in Europe. In England, and later in the American colonies, pamphlets were printed on every topic, including: religion, politics, social and literacy criticism, short fiction, and autobiography. Pamphlets filled the information gaps left by newspapers of the day, which were usually limited to government action and the most important local happenings. Small, relatively inexpensive to manufacture, and easily sharable, pamphlets became one of the chief forms of interpersonal communications in the seventeenth and eighteenth centuries.

American political pamphlets became a vehicle for debate about Parliamentary action and the colonial response leading up to the Revolutionary War. One such pamphlet is Farmer Refuted, authored by Alexander Hamilton discussing the political relationship between Great Britain and the colonies. Throughout the war, pamphlets were an outlet for citizens to share their opinions on the war and Congress. With the formation of the new government, and the rise of political parties in the 1790s, political pamphlets became tools of the parties and leaders to share policy proposals and attack opponents, as well as celebrating public events and political anniversaries, such as Election Day and Independence Day. 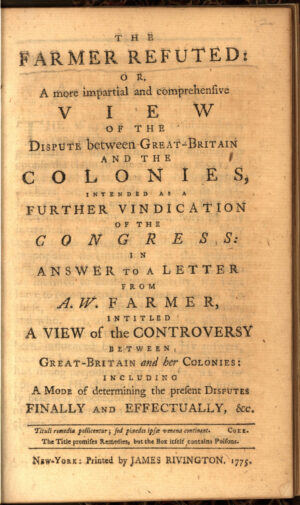 Hamilton, Alexander, et al. The Farmer Refuted: Or, a More Impartial and Comprehensive View of the Dispute between Great-Britain and the Colonies, Intended As a Further Vindication of the Congress: In Answer to a Letter from A.w. Farmer, Intitled a View of the Controversy between Great-Britain and Her Colonies: Including, a Mode of Determining the Present Disputes Finally and Effectually, & C. Printed by James Rivington, 1775.
View Metadata 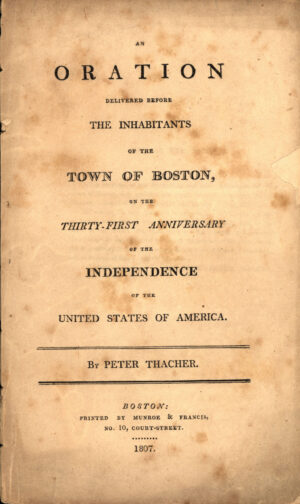 Thacher, Peter Oxenbridge, et al. An Oration Delivered Before the Inhabitants of the Town of Boston : On the Thirty-First Anniversary of the Independence of the United States of America. Printed by Munroe & Francis, No. 10, Court-Street, 1807.
View Metadata

The volume and influence of pamphlets waxed and waned throughout the nineteenth century, depending on the political dialogue and candidates’ personalities. 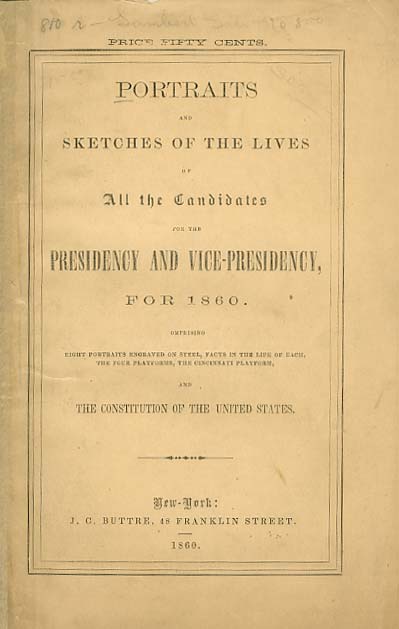 Portraits and Sketches of the Lives of All the Candidates for the Presidency and Vice-Presidency, for 1860: Comprising Eight Portraits Engraved on Steel, Facts in the Life of Each, the Four Platforms, the Cincinnati Platform, and the Constitution of the United States. New-York: J.C. Buttre, 1860
View Metadata

Pamphlets were also ways to republish speeches and public addresses for wider audiences. One such address was the Election Day sermon. Common in New England in the eighteenth and early nineteenth centuries, Election Day sermons were part of Election Day celebrations (Election Day was considered a holiday) or the opening of a legislative session. The purpose of the sermon was to remind government officials of their duty to govern well, and the people to honor the decisions made by the legislature. 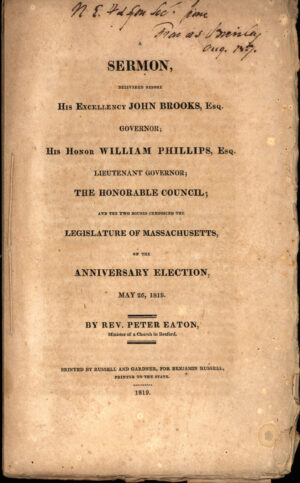 Eaton, Peter, et al. A Sermon, Delivered Before His Excellency John Brooks, Esq., Governor, His Honor William Phillips; Esq., Lieutenant Governor; the Honorable Council; and the Two Houses Composing the Legislature of Massachusetts, on the Anniversary Election, May 26, 1819 / by Rev. Peter Eaton, Minister of a Church in Boxford. Printed by Russell and Gardner, for Benjamin Russell, Printer to the State, 1819.
View Metadata
Previous
Online Exhibitions   »   Trail to the Voting Booth   »   Political pamphlets