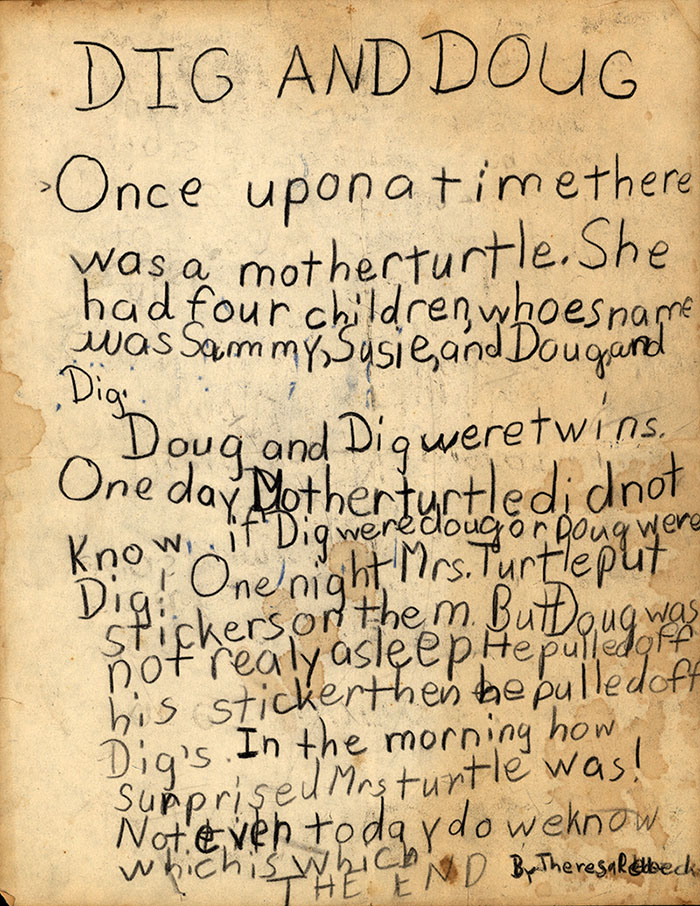 Rebeck, Theresa, Dig and Doug (autograph manuscript of a story), circa 1964
View Metadata

Theresa Rebeck was born in Kenwood, on the outskirts of Cincinnati, Ohio, one of six children in a family once honored as “Family of the Year” by the local congregations of the Mormon Church (Cincinnati Post, November 23, 1983).  Nominated by a neighbor, the Rebecks, a Catholic family, were cited for compassion, spiritual values, and community service.  The Post’s profile of the family quoted Joan Rebeck (Theresa’s mother), who shared biographical insight related to her daughter ‘s upbringing that is useful to current scholars. Mrs. Rebeck said her approach to child rearing “emphasizes responsibility and letting them go.”  The article described the Rebeck children as “independent, active and outspoken about social justice, … [with] strong, though non-sanctimonius, spiritual and religious impulses.” These are characteristics that resonate in reviews of Theresa Rebeck’s much later creative works and non-fiction essays and articles.

A treasure in the archive is this piece of juvenalia, “Dig and Doug.”  In this one-page story, the future playwright introduces themes of identity, trickery, subversive behavior, and situational uncertainty