Despite another successful issue in July, the intense workload required to produce Bradley: His Book began to take a toll on the artist and publisher. When a contact in New York failed to produce acceptable literary content for the next issue, Bradley was compelled to create much of it himself. This final issue of Volume 1 featured the two-act play “Beauty and the Beast,” written and illustrated by Bradley with songs by his longtime colleague Nixon Waterman. It did not appear until October and Bradley was unhappy with the finished product; the delays had forced Bradley to outsource the printing of all but the cover to another press. Bradley rallied with the next issue, moving to a larger format. Although the publication continued to be a success, Bradley’s ambition overwhelmed him and he suffered a breakdown. The January 1897 issue had been completed before the breakdown and went to press, but it was to be the last complete issue of Bradley: His Book released. The February 1897 issue was to have contained the concluding chapter of Bradley’s “A Primer of Ornament and Design” series. The completed work would ultimately be issued as a stand-alone publication by the University Press in 1901 and again by Harper Brothers in 1903. 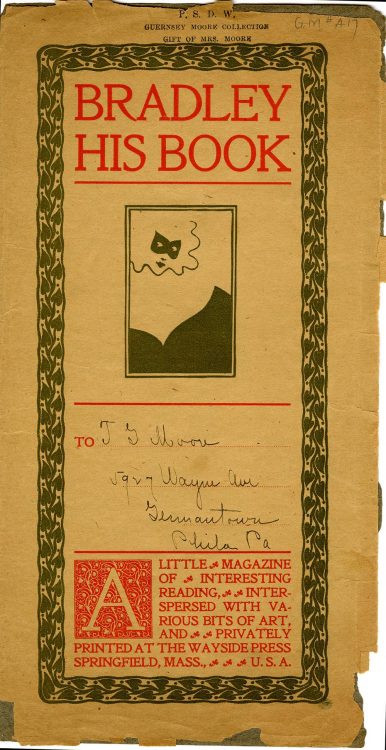