Previous
Online Exhibitions   »   Will H. Bradley, an American Artist: Selections from the Gordon A. Pfeiffer Collection   »   Career and published work (1) 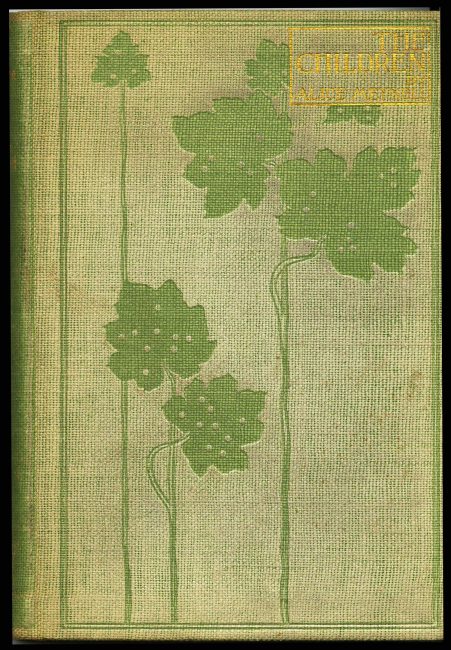 Alice Meynell was an English poet and essayist. The Children contains a selection of her essays. According to the publisher’s advertisements, which are included at the end of this book, The Children was the first book printed at Will Bradley’s Wayside Press. Bradley established the Wayside Press with the idea that he would oversee every aspect of a book’s design. To that end, in addition to printing The Children, Bradley was responsible for the book’s binding, endpapers, title page, decorative initial letters, and colophon. A contemporary, printer and bookseller H. A. Adam observed that “unlike many other artists and illustrators Bradley sees his productions through from beginning to end. He supervises everything, sees that the work is properly engraved and printed. His designs are unique and his drawings are made with a definite printing intention.” 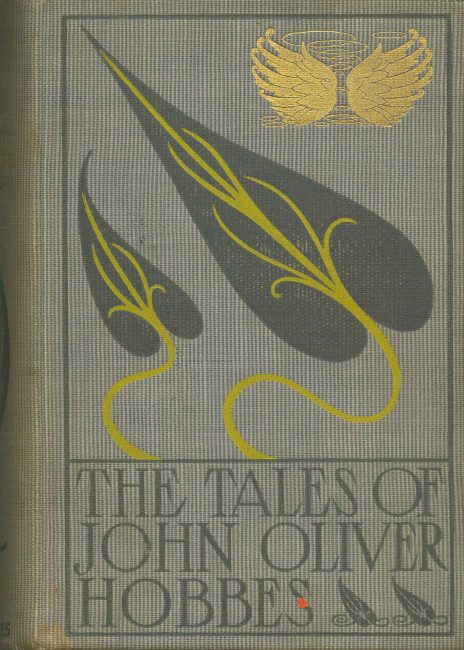 This book reuses a binding and title page design that Bradley had previously created for the publisher’s edition of Hobbes’ The School For Saints, which was printed earlier in the same year. John Oliver Hobbes was the pseudonym of Pearl Mary Teresa Craigie, an Anglo-American novelist and dramatist. 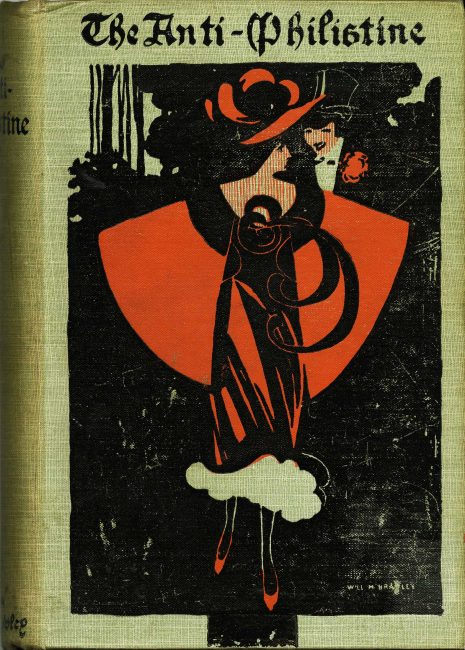 Bradley’s cover design for the July 1, 1895, issue of The Echo was recycled again for the cover of this bound volume of The Anti-Philistine. As with its appearance on the cover of Cape of Storms, the image was slightly cropped from its original form. The Anti-Philistine was a short-lived chapbook periodical, titled in parody of Elbert Hubbard’s journal, The Philistine. (The four volumes bound here are all that were ever issued.) The publishers stated that The Anti-Philistine was “a periodical of protest […] against the ‘log-rolling corruption that is rotting the life of our modern fiction.’ ”  The ever-sardonic Ambrose Bierce was a frequent contributor, and the magazine also published pieces by Percival Pollard, Eugene Field, and Stanley Waterloo. The editors of The Anti-Philistine also devoted a great deal of space to book reviews, the majority of which delivered scathing critiques of the popular writers of the day. Among the books reviewed in the first issue is Richard Le Gallienne’s The Quest of the Golden Girl, which the reviewer described as a book containing “page after page of tedious rhapsody” so awful that “it is no longer possible to regard Mr. Le Gallienne as a literary man.” Other reviews receive such charitable titles as “Magnificent Trash” and “Yankee Hogwash.” The final issue also included a review of American literature as a whole, entitled, “Why American Novels Are Flabby.” 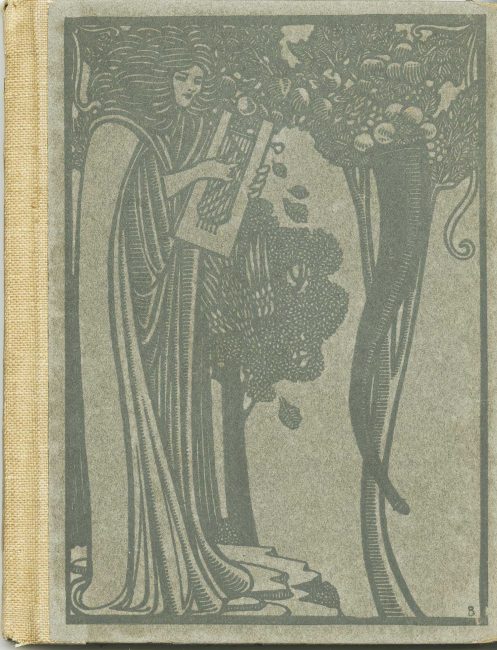 The Earth Breath was the second volume of poems written by the Irish poet George William Russell, under his pseudonym A.E. The book was printed for John Lane at Bradley’s Wayside Press. (Curiously, despite printing the book himself, Bradley’s name is misspelled on the colophon). Bradley designed two different bindings for this book, both of which are shown here. The tree design, shown to the left, was also used for the title page image. 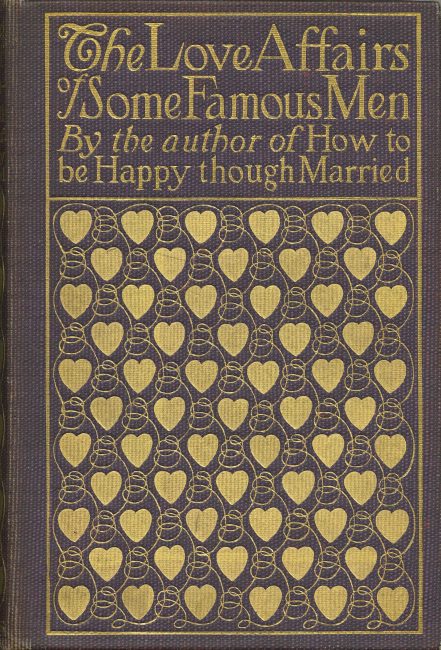 E. J. Hardy was an Irish cleric, army chaplain, and writer. He had previously published a popular book, How to Be Happy Though Married, which a New York Times reviewer described as a “noteworthy example of success, due in large part to a title.” This volume presents a collection of anecdotes about famous men and their love affairs (some successful, others less so), with a concluding section about famous men who never married. The American edition appeared with a binding and title page designed by Bradley.

Irving, Washington. The Legend of Sleepy Hollow From the Sketch Book of Washington Irving. New York: Published for Will Bradley by R. H. Russell, 1897.
View Metadata

Bradley printed this edition of The Legend of Sleepy Hollow at his Wayside Press. Bradley designed the book’s cover, title page, and frontispiece, as well as its overall layout. 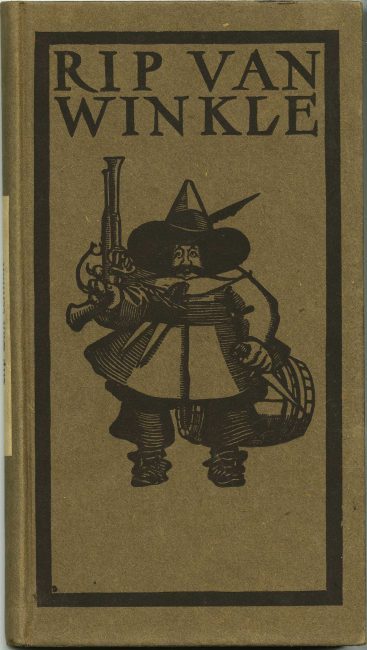 This was the second of two Washington Irving works that Bradley printed at his Wayside Press. As with The Legend of Sleepy Hollow, the book features a cover, title page, frontispiece, and layout by Bradley.

This edition of the Rubáiyát was another of Bradley’s Wayside Press publications. The cover, title page, and printed decorative emblems were all designed by Bradley. 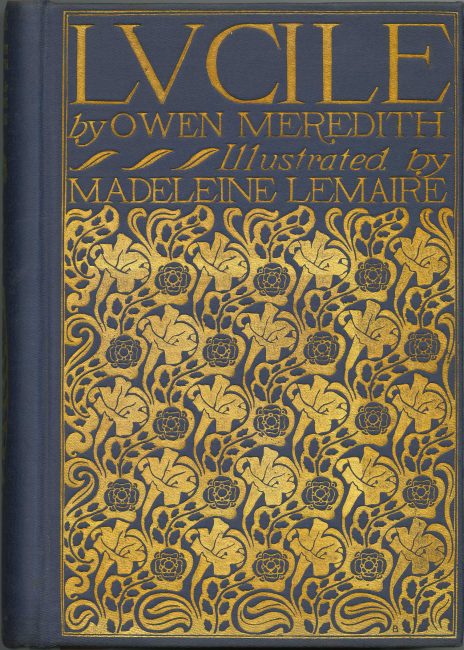 Robert Bulwer-Lytton was a British diplomat who served as the viceroy of India from 1876 to 1880. As a writer, he published under the pseudonym of Owen Meredith. Although little read today, his verse was well regarded in his time. Lucile, first published in 1860, was a romantic novel set in verse. A year after its publication, the Literary Gazette accused Bulwer-Lytton of plagiarism, arguing that the first part of Lucile was a paraphrasing of George Sand’s 1831 novella Lavinia. Bulwer-Lytton answered the criticism in a roundabout way, claiming that he had been read sections of the novella while ill and that he had incorporated parts of the plot unintentionally. In private, he acknowledged that he had borrowed some of his plot, but that he believed he had made it his own by transforming it into verse. A third edition of Lucile (1867) included a printed refutation of the charges. The general public seems not to have cared one way or the other, as Lucile was widely popular in England, and even more so in America, where the book was printed and reprinted by over 100 publishers in more than 2000 editions, with the book’s popularity peaking in the 1880s and 1890s. This edition features a cover and title page designed by Will Bradley and was issued in several different binding color variants. Unfortunately for Bulwer-Lytton, a lack of international copyright protections meant that he made little profit from his American audience.

Previous
Online Exhibitions   »   Will H. Bradley, an American Artist: Selections from the Gordon A. Pfeiffer Collection   »   Career and published work (1)