Previous
Online Exhibitions   »   Will H. Bradley, an American Artist: Selections from the Gordon A. Pfeiffer Collection   »   Career and published work (3) 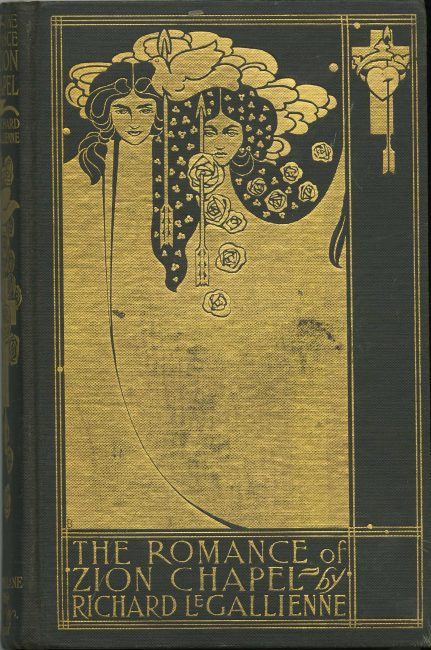 At the beginning of 1898, Bradley, recognizing that he could no longer handle the workload associated with running his own printing business, decided to sell his Wayside Press (along with all of its staff and equipment) to John Wilson & Son of the University Press in Cambridge. Bradley proceeded to work for the University Press until the end of 1899. In later years Bradley came to regret this decision, calling it “a hurried and ill-conceived arrangement that eventually proved so mutually unsatisfactory that I faded out of the picture.” One of his first jobs under this contract was The Romance of Zion Chapel, for which he designed the binding. Le Gallienne, clearly pleased with Bradley’s work, inscribed one copy to him in which he addressed Bradley as “builder of books beautiful and chief architect of this.” 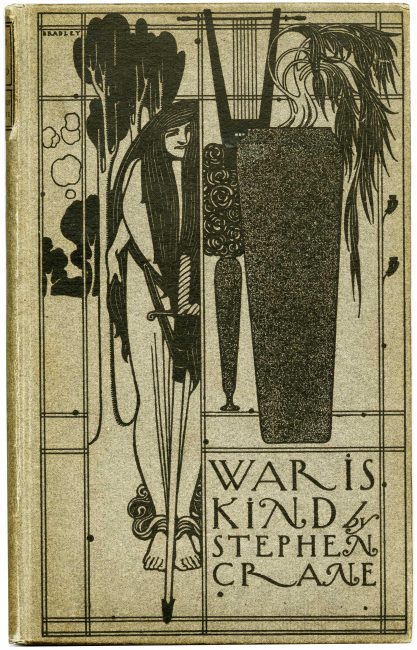 Frederick A. Stokes commissioned Will Bradley to design illustrations and decorations for Stephen Crane’s second collection of poetry, War is Kind. (About half the poems had previously appeared in journals). The book was published to mixed reviews, with many reviewers comparing his verse unfavorably to earlier publications such as The Red Badge of Courage (1895) and The Black Riders and Other Lines (1895). Crane himself felt that his poetry was superior to his prose and preferred to be remembered as a poet first and foremost. Many of the reviews took issue with Crane’s free verse, which ran contrary to the conventions of his day. Willa Cather, writing for Books and Magazines, complained that “there are seldom more than ten lines on a page, and it would be better if most of those lines were not there at all.” Bradley’s art, though, received a great deal of praise, some of it even coming from reviewers who disliked Crane’s verse. The Book Buyer also (somewhat fairly) complained that the book’s dark grey paper made it too hard to read the typeface; the reviewer remarked that it was “not fair to throw mechanical difficulties in the way of deciphering” Crane’s already difficult verse. 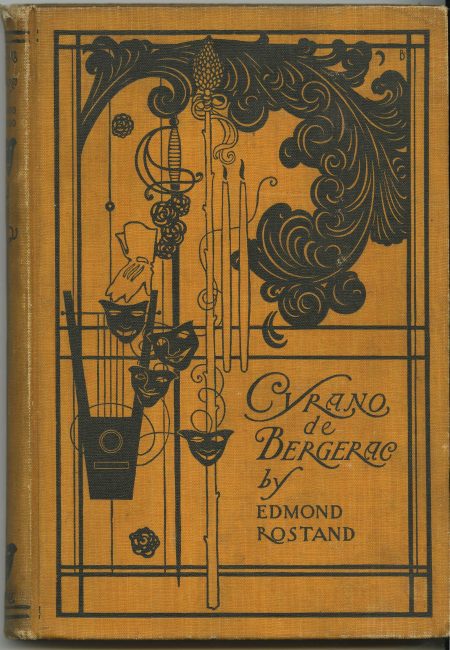 Edmond Rostand was a French dramatist. Cyrano de Bergerac, the most popular of his plays, was first performed in Paris in 1897. The play, which takes place in seventeenth century Paris, revolves around the struggles of Cyrano, a nobleman who believes that his large nose prevents any woman from loving him. Bradley designed the cover for this edition of the play’s English translation. 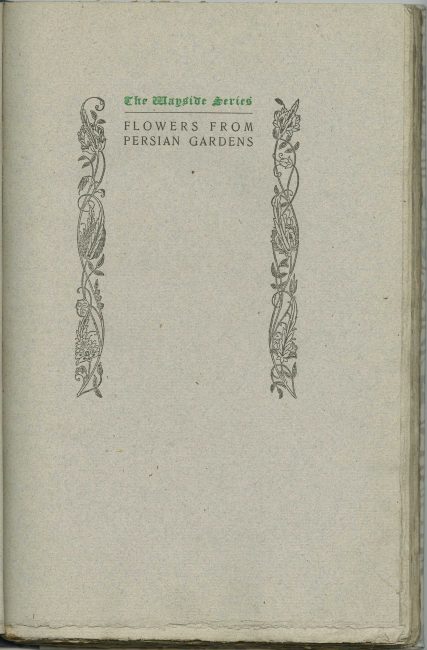 One of the thirteen entries in the University Press’s Wayside Series, Flowers From Persian Gardens was arranged by Will Bradley. His binding and endpaper designs from his 1897 Rubáiyát were reused for this edition. In addition to the trade edition, Flowers From Persian Gardens was also printed in a limited edition of 100 copies printed on handmade paper, one of which is shown here. 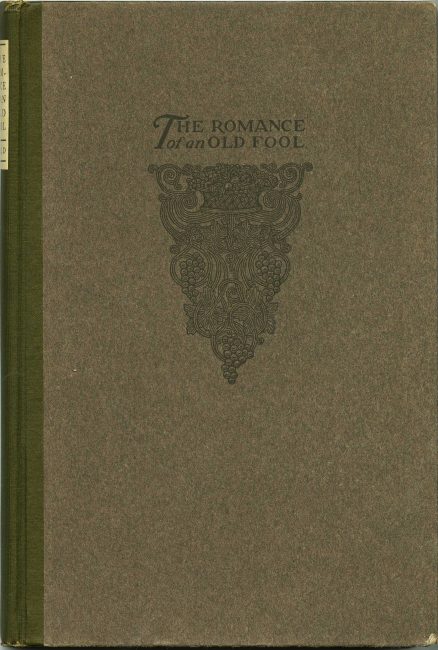 The Romance of an Old Fool is one of several books that Bradley’s bibliographer, Anthony Bambace, has identified as possibly having been designed by Bradley. Bradley did not always sign his work, nor did publishers always credit their graphic designers. (Some of Bradley’s works have only been identified as being his because they were described in trade journals at the time of their publication). The matter is further complicated by the fact that Bradley’s immense popularity led many other graphic artists to imitate his style, making it all the more difficult to positively identify his work in the absence of other surviving documentation. In the case of The Romance of an Old Fool, the binding and the design printed on the dust jacket may have been Bradley’s work. 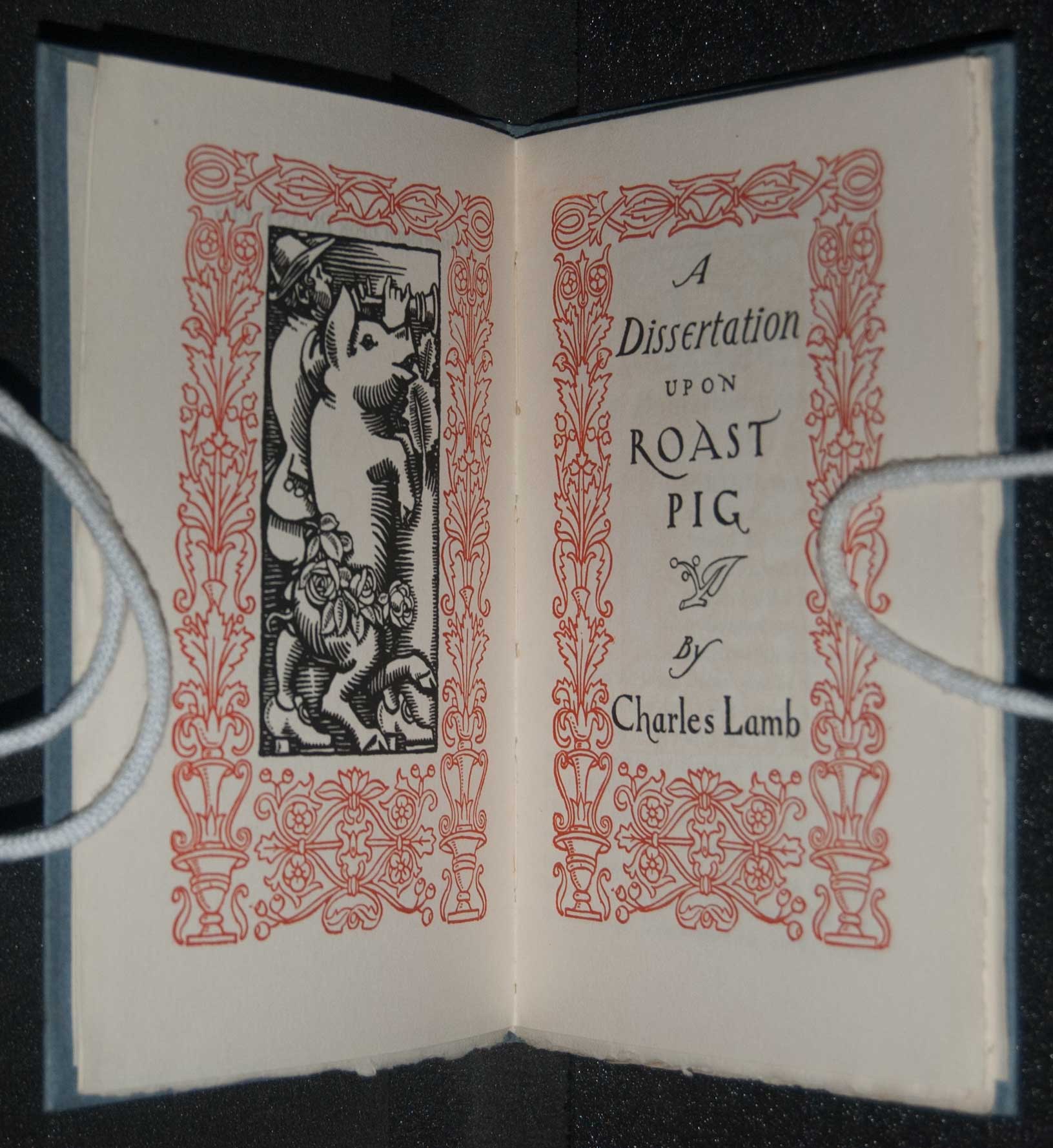 Lamb, Charles, Will Bradley, and Bruce Rogers. 1903. A dissertation upon roast pig. Concord, Mass: Sign of the Vine.
View Metadata

In 1902 Bradley built a small print shop near his home in Concord, Massachusetts. A Dissertation Upon Roast Pig is one of four books that he designed there. It includes a woodcut title page illustration and decorative borders and initials, all designed by Bradley. The print shop allowed Bradley to design and set type by hand, but it was not large enough for him to produce an entire print run of books. Although the books’ colophons state that they were “arranged and put into type by Will Bradley and issued from the sign of the vine,” they were actually printed in Boston, by the Heintzeman Press. 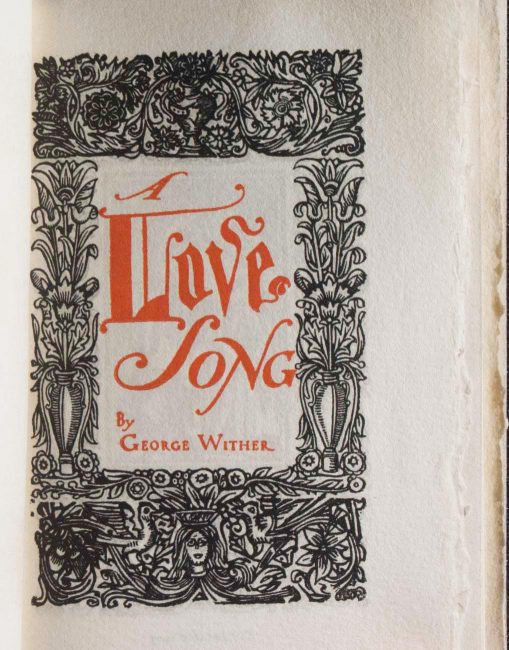 This is the last of the books that Bradley designed in his Concord print shop. Bradley had planned to produce two more such books, but he ceased this endeavor in 1903 after American Type Founders recruited him to print their promotional materials. 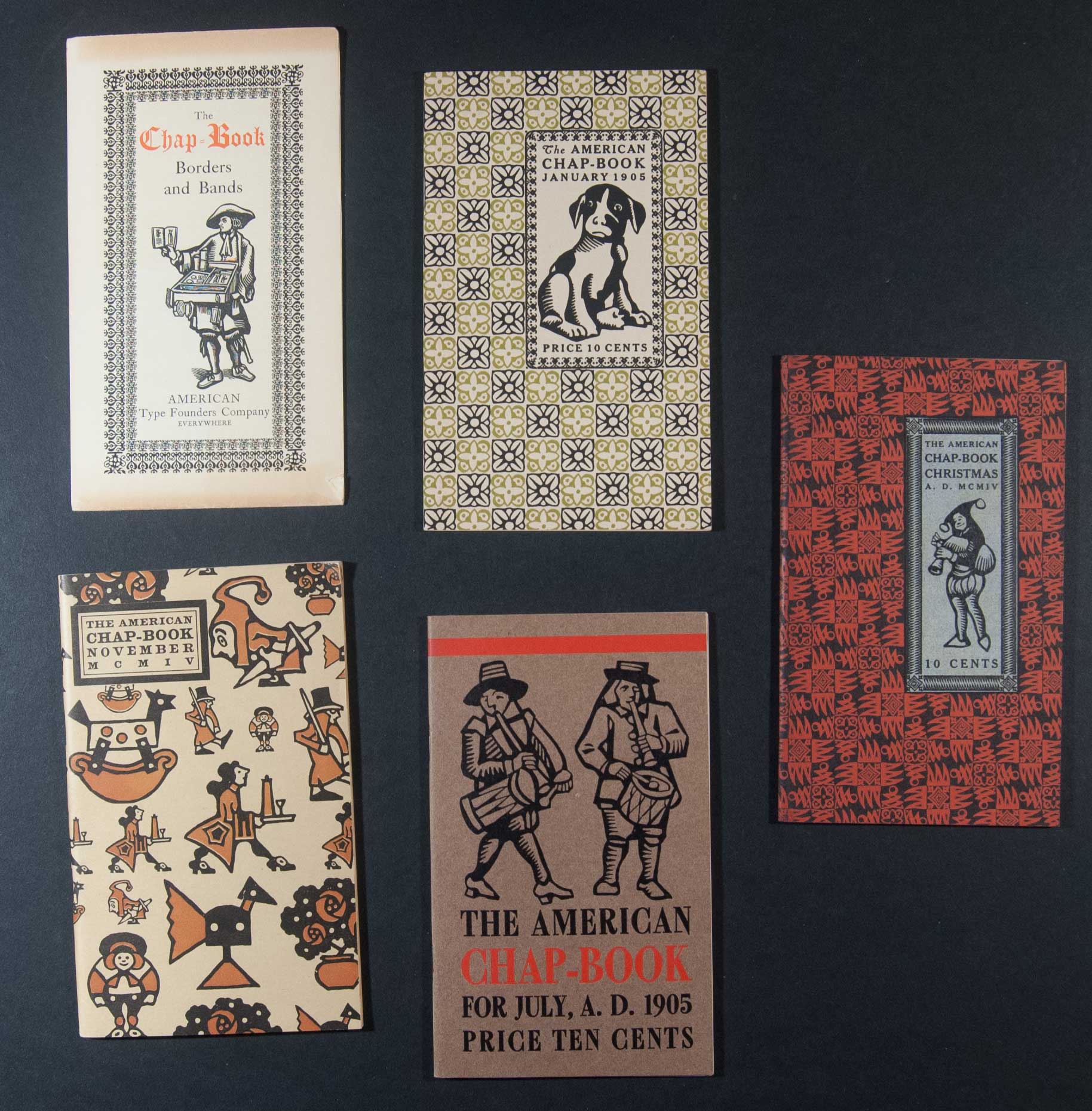 Bradley produced twelve issues of The American Chap-Book while working for American Type Founders. The journal printed Bradley’s essays on the business and art of printing.  His essays ranged in subject from practical printing topics such as title pages, business cards, and borders, to more philosophical and aesthetic issues such as taste, simplicity, and appropriateness. Each issue was copiously illustrated with examples from Bradley’s own work, and some included fold-out broadsides showing yet more examples, all intended to elucidate the point of Bradley’s essays. Taken together, The American Chap-Book provides both a summation of Bradley’s own approach to his work, and a visual record of the great variety of his professional output.

Previous
Online Exhibitions   »   Will H. Bradley, an American Artist: Selections from the Gordon A. Pfeiffer Collection   »   Career and published work (3)