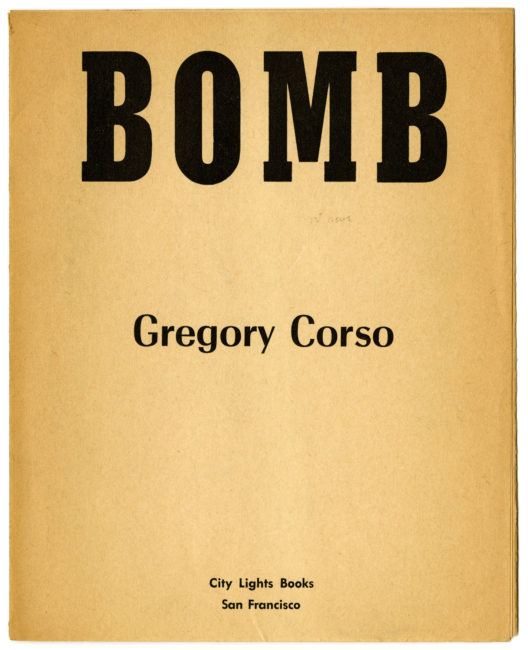 Bomb is Gregory Corso’s rumination on the subject of nuclear war. This visual poem was printed as a calligram—a design that uses the arrangement of the letters on the page to create an image. Since there is no clear political statement in the text, Corso’s dark humor was sometimes misinterpreted. Yet when Bob Dylan encountered Corso’s Bomb, he found it to speak forcefully to “the spirit of the times … a wasted world and totally mechanized.” 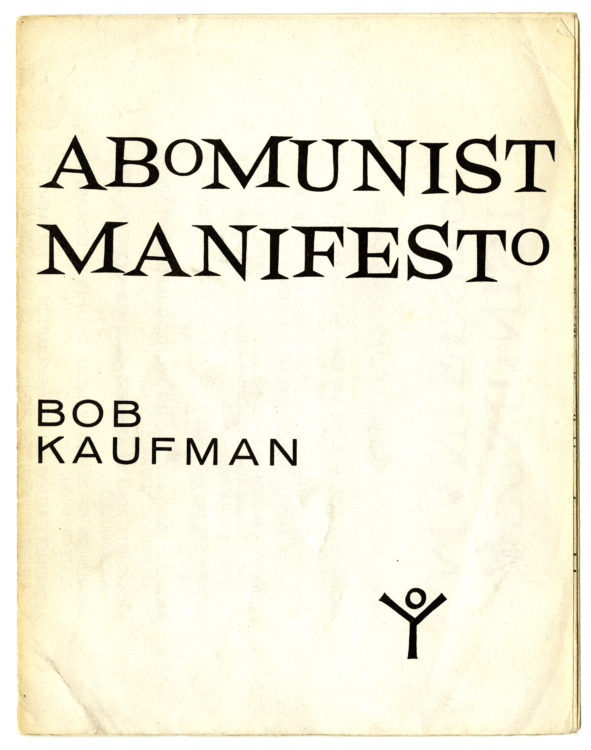 Bob Kaufman’s self-styled credo of Abomunism is a distillation of the Beat ethos. Called an “anti-philosophy,” Abomunism rejects all systems and positions in favor of an improvisational and irreverent approach to daily life. As Kaufman writes, “ABOMUNISTS NEVER COMPROMISE THEIR REJECTIONARY PHILOSOPHY.” 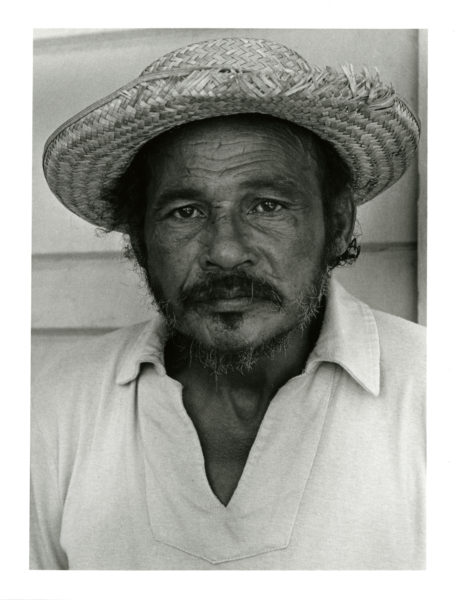 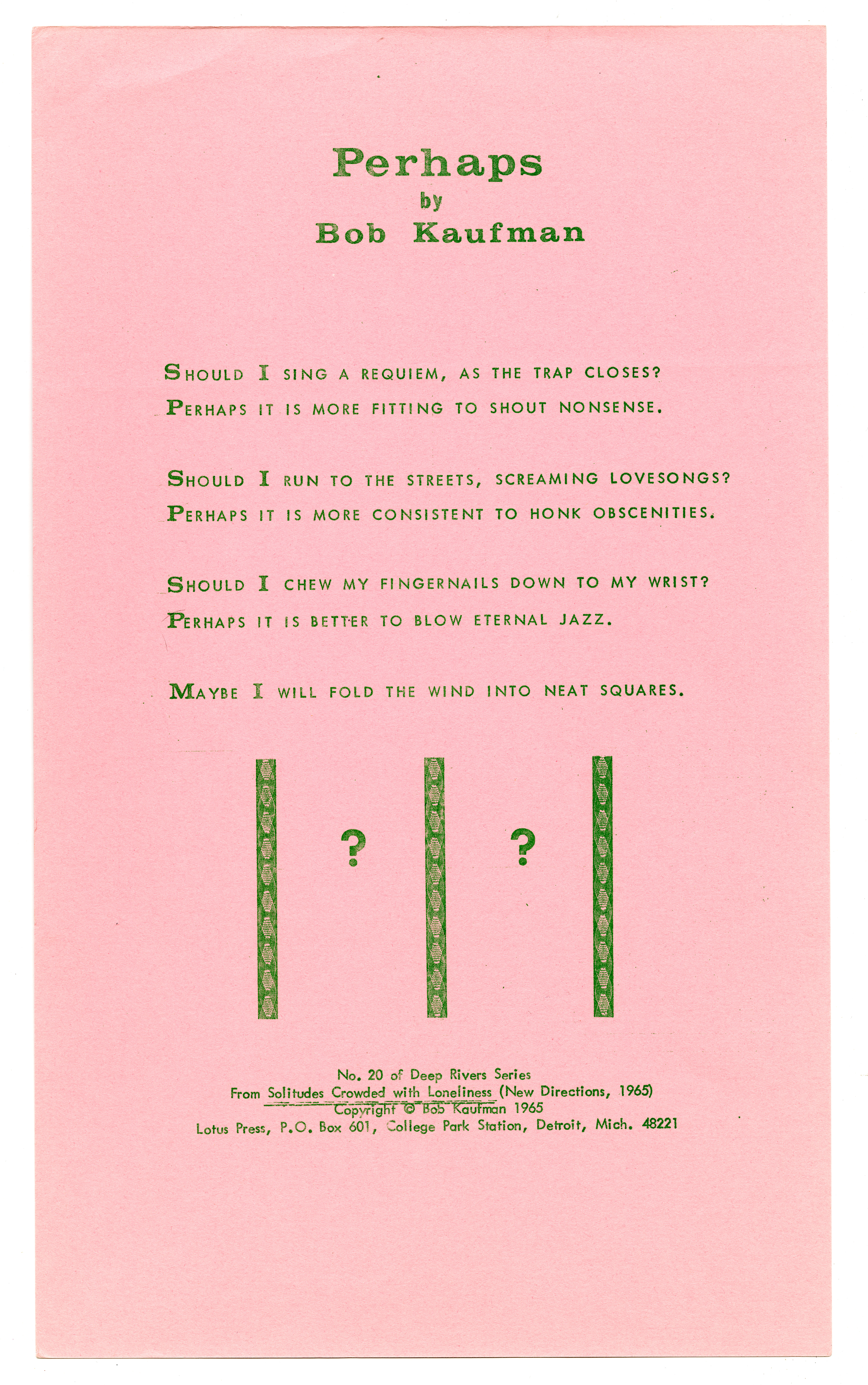 Bob Kaufman was a Jewish African-American street poet from New York who became a legendary figure in the North Beach section of San Francisco. He developed a syncopated, improvisational style related to bebop music. In 1959 Kaufman co-founded Beatitude magazine, which published many young Beat and Beat-inspired poets, often for the first time. Known for his uncompromising views, Kaufman took a Buddhist vow of silence after learning of the assassination of John F. Kennedy that lasted until the end of the Vietnam War. 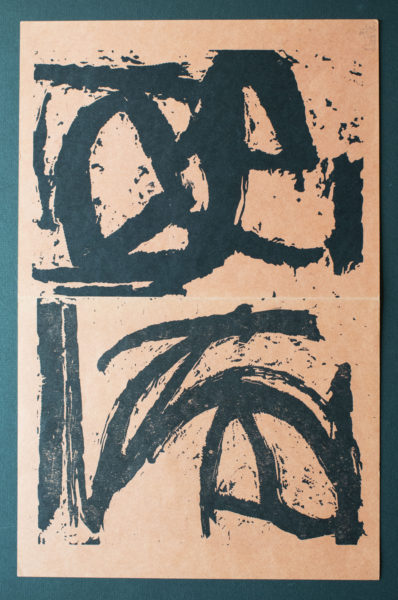 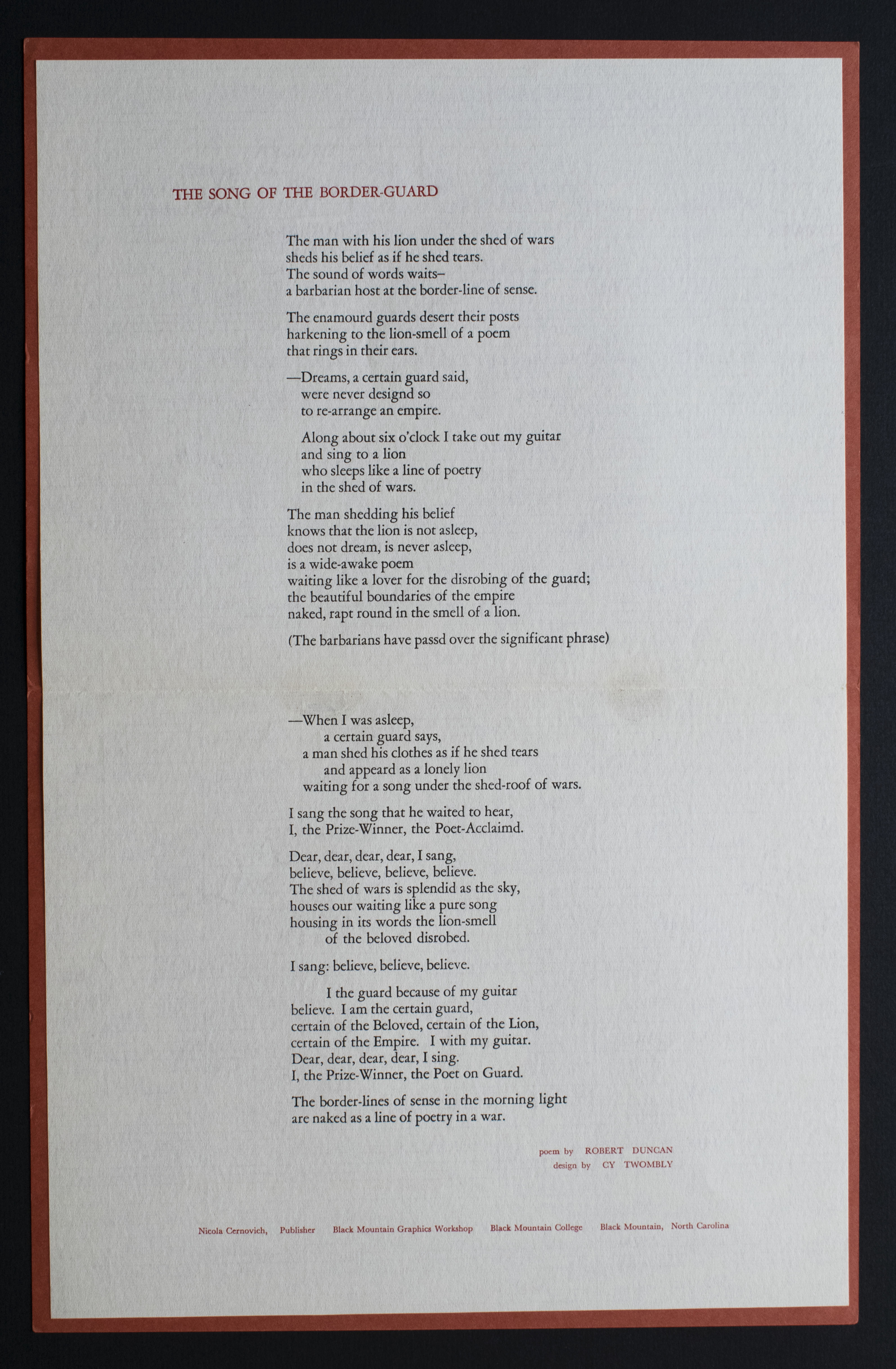 This woodcut print was made through a collaborative process at Black Mountain College Graphics Workshop. Black Mountain College was a renowned avant-garde art school in North Carolina committed to collaboration and multi-media productions. Accordingly, at the workshop visual artists and poets frequently produced works together that integrated word and image. Here, poet Robert Duncan worked together with artist Cy Twombly. Duncan wrote the poem on the other side and Twombly created the design shown here. Nicola Cernovich and a young Robert Rauschenberg cut the woodblock for this print. 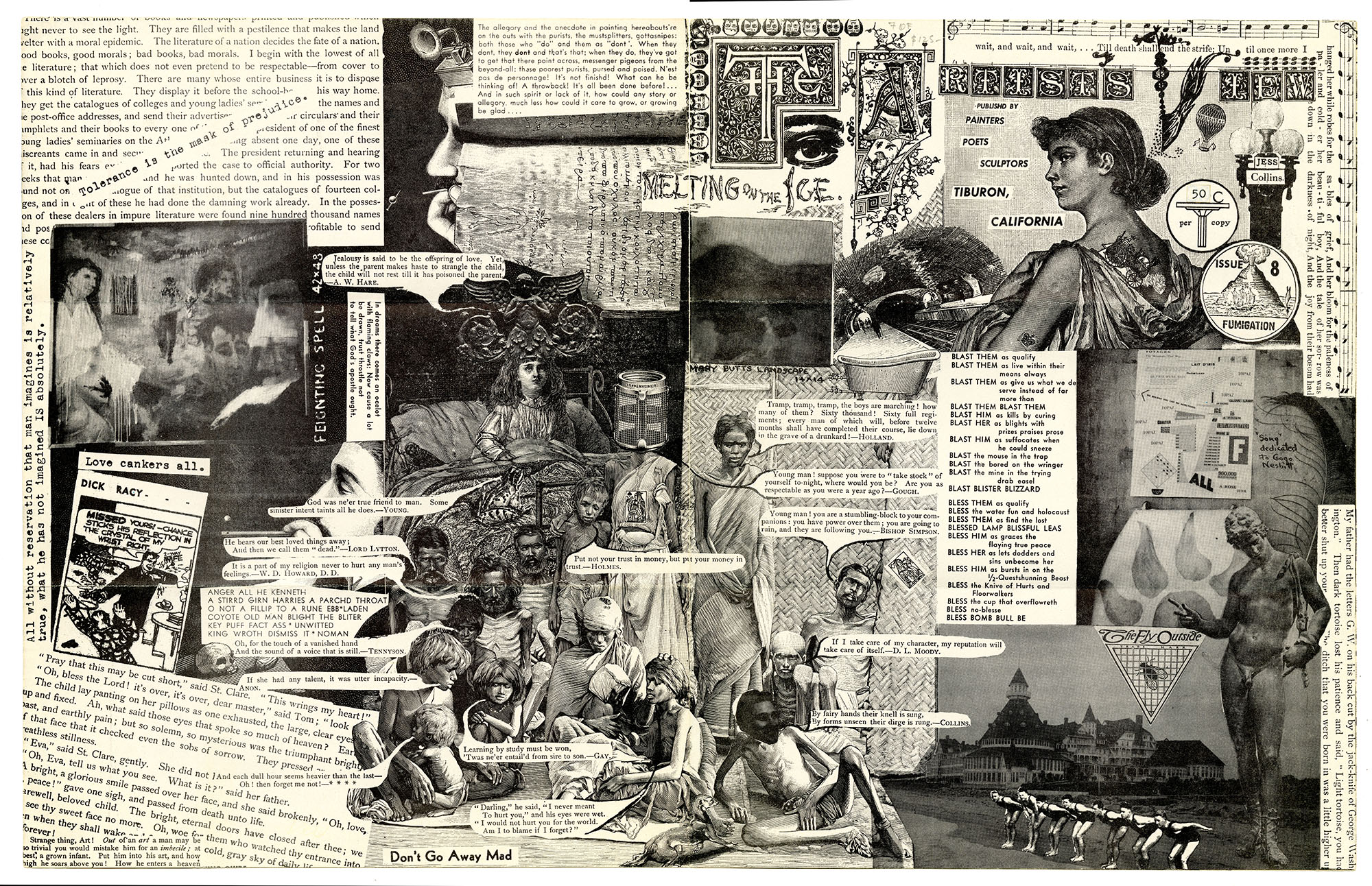 This fold-out publication presents an early example of Jess’s signature “paste-up” technique —intricate collages of text and image made from previously published materials, sometimes (as here) photographed and reprinted. For many artists associated with Beat aesthetics— Jess, Bruce Conner, George Herms, and Wallace Berman among others—assemblage offered an art-making strategy that operated on the margins of both fine art and commercial culture, dealing instead with discarded material as medium. Assemblage allowed Jess and other artists to reconfigure meaning outside of conventional structures, as in Jess’s famous reworkings of Dick Tracy comics to suggest deviant subcultures and poetic expressions. 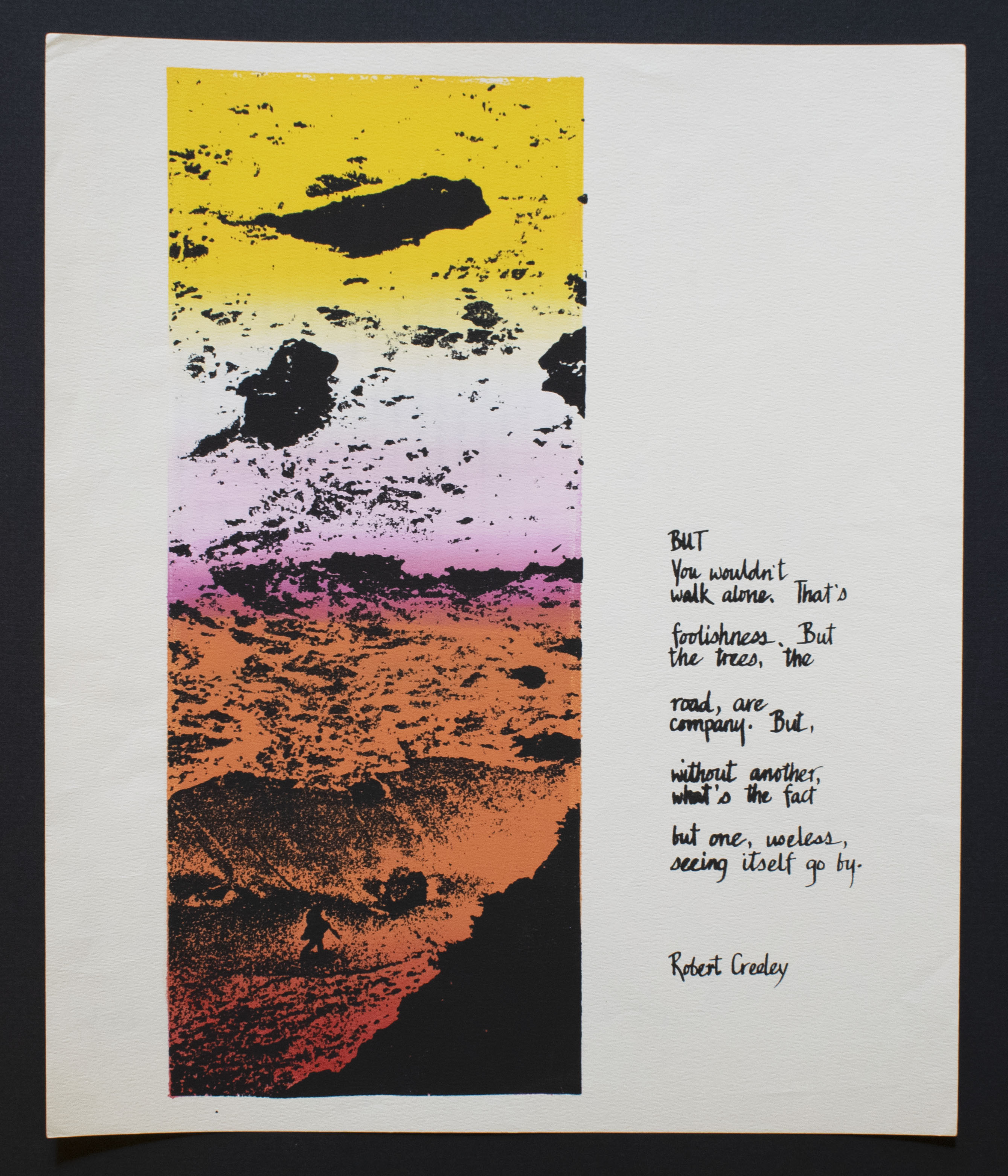 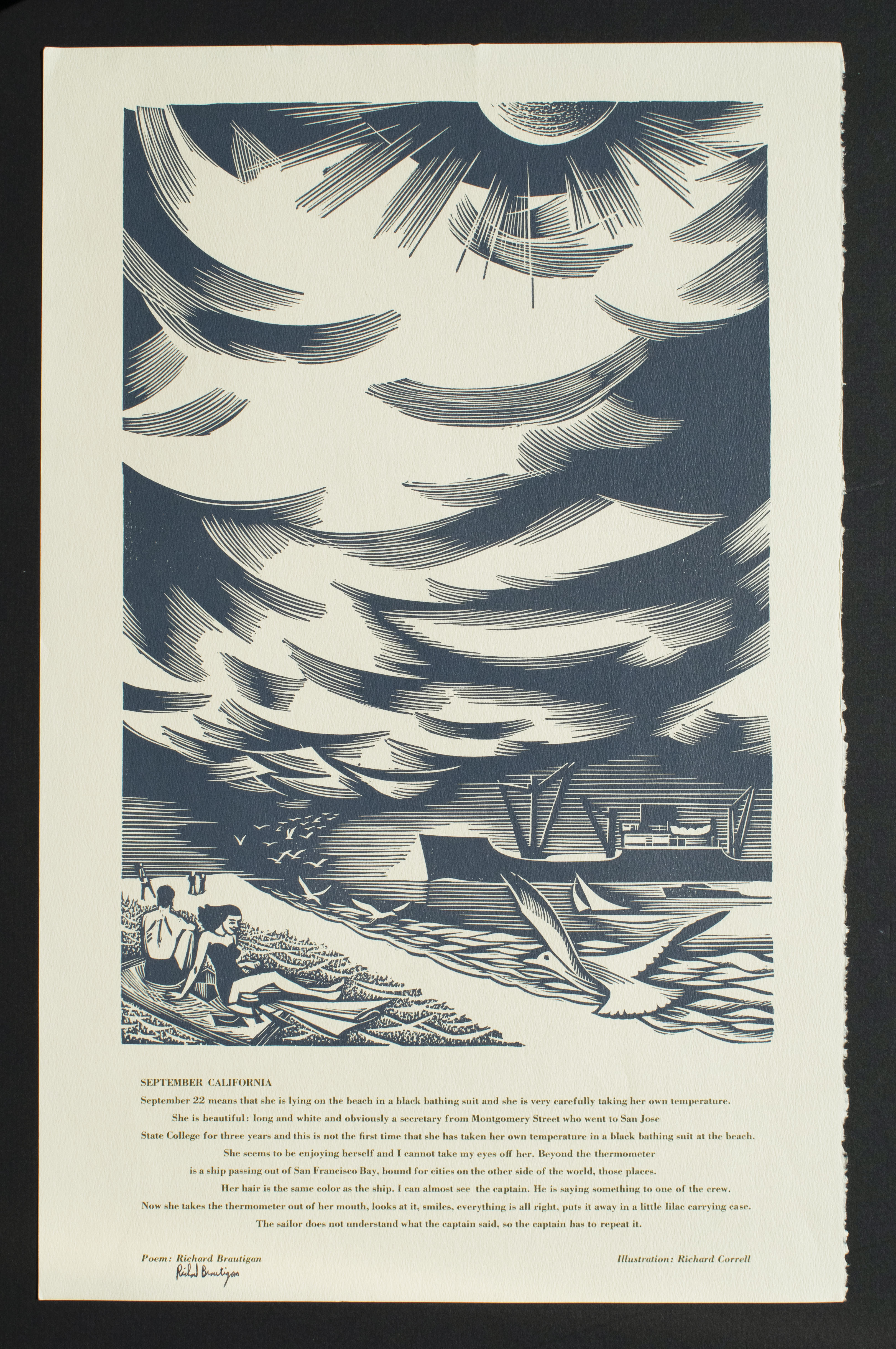 Postwar San Francisco was home to a self-sustained and prolific poetry movement that came to be known as the San Francisco Renaissance. The West Coast Beat poets played an integral role in the movement, which also contributed to the emergence of the hippie counterculture. In 1963 and 1964 the San Francisco Arts Festival produced a portfolio of broadsides featuring collaborations between local poets and visual artists. The 1964 folio shown here includes work by West Coast Beat poets Joanne Kyger, Lenore Kandel, Richard Brautigan, and David Meltzer. Themes associated with the West Coast Beats include nature, spirituality, and the body. 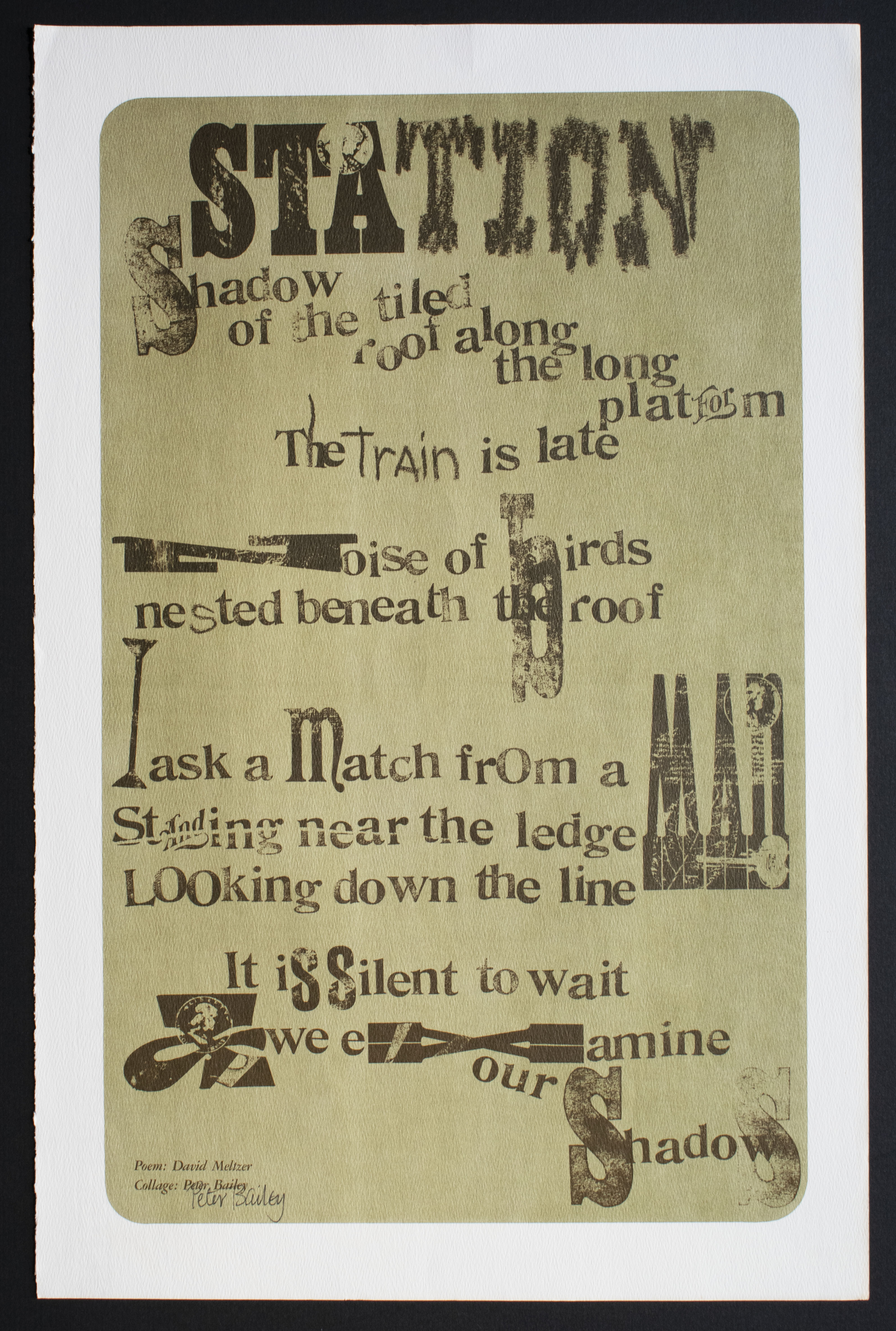 San Francisco artist Peter Bailey, shown collaborating with poet David Meltzer on Station, was lead designer for East Wind Printers, which produced this and other San Francisco Arts Festival poetry folios. Bailey later created poster art for psychedelic rock concerts. His poster advertising a 1966 series of performances by the Jefferson Airplane at the Fillmore Auditorium is on view in the other room. 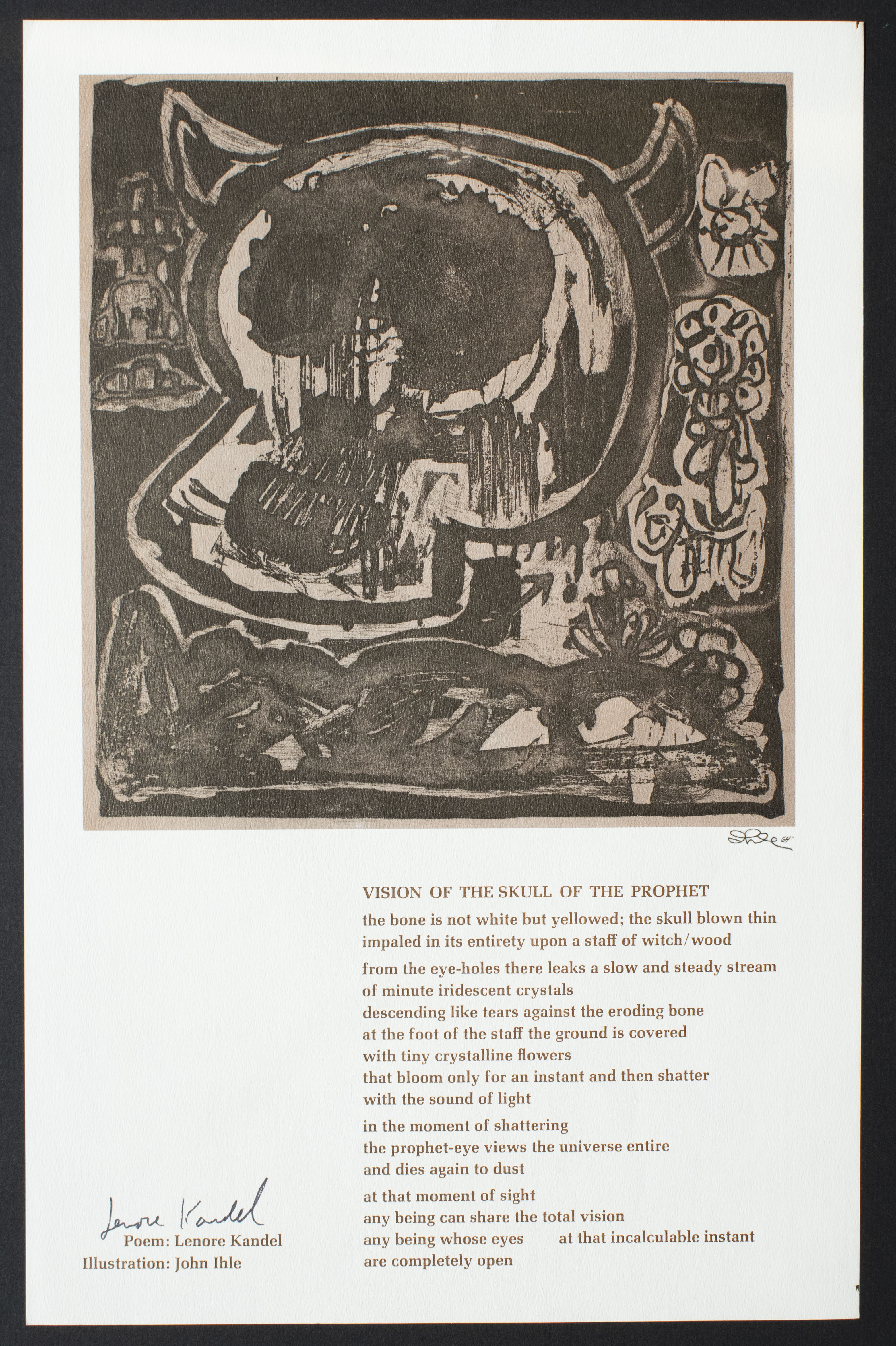 Lenore Kandel and John Ihle
Vision of the Skull of the Prophet, 1964
From San Francisco Arts Festival: A Poetry Folio. East Wind Printers 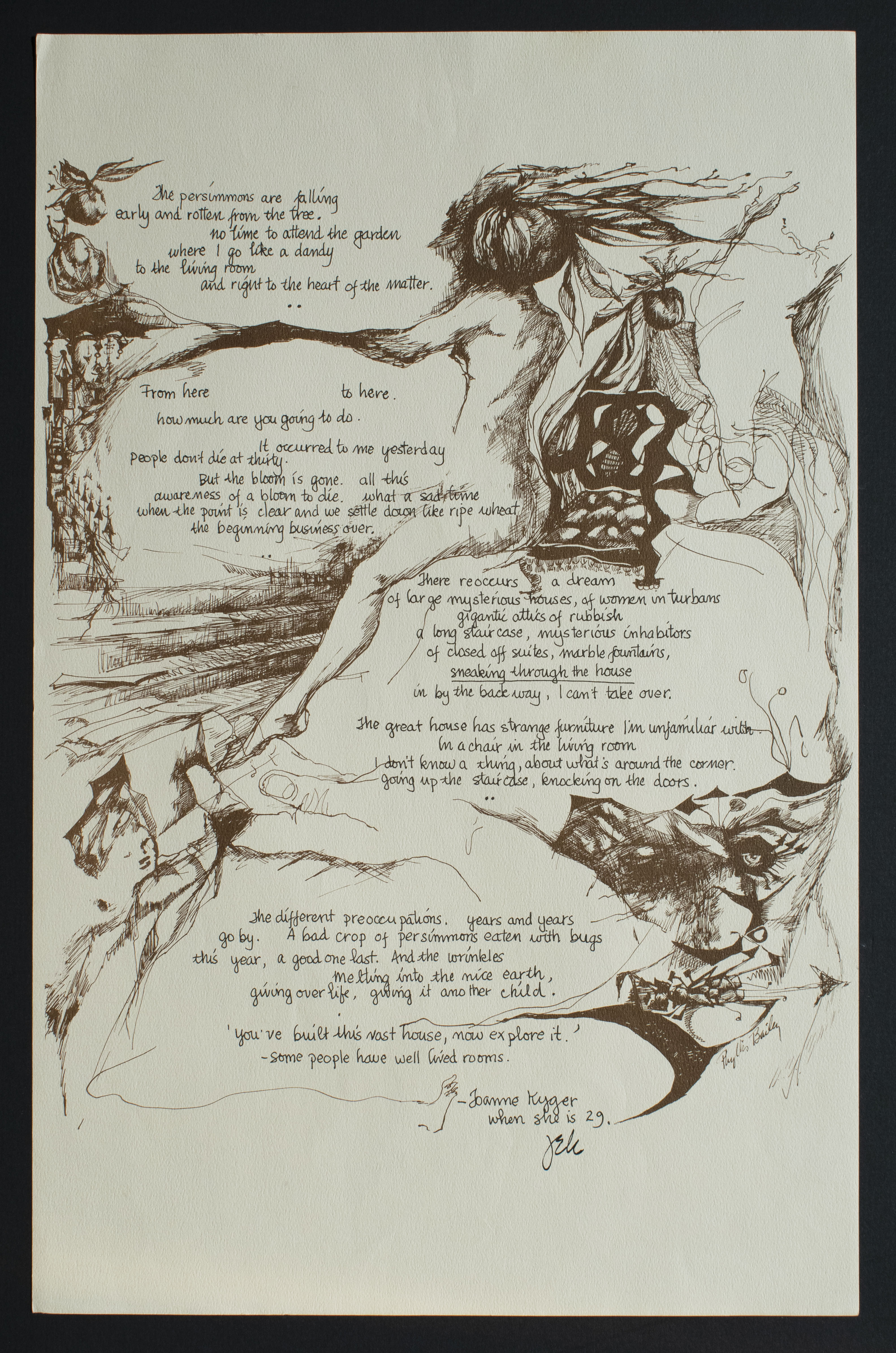 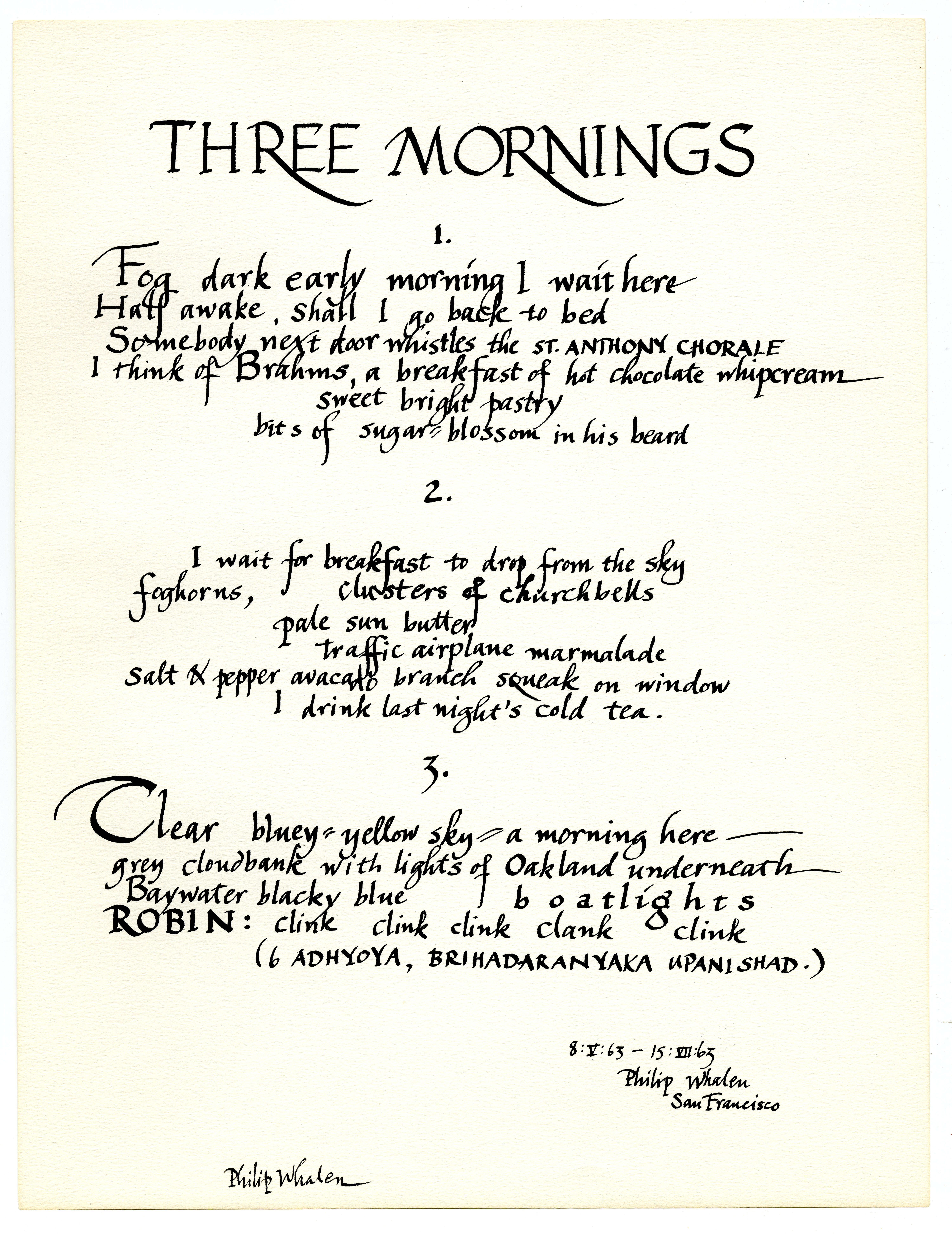 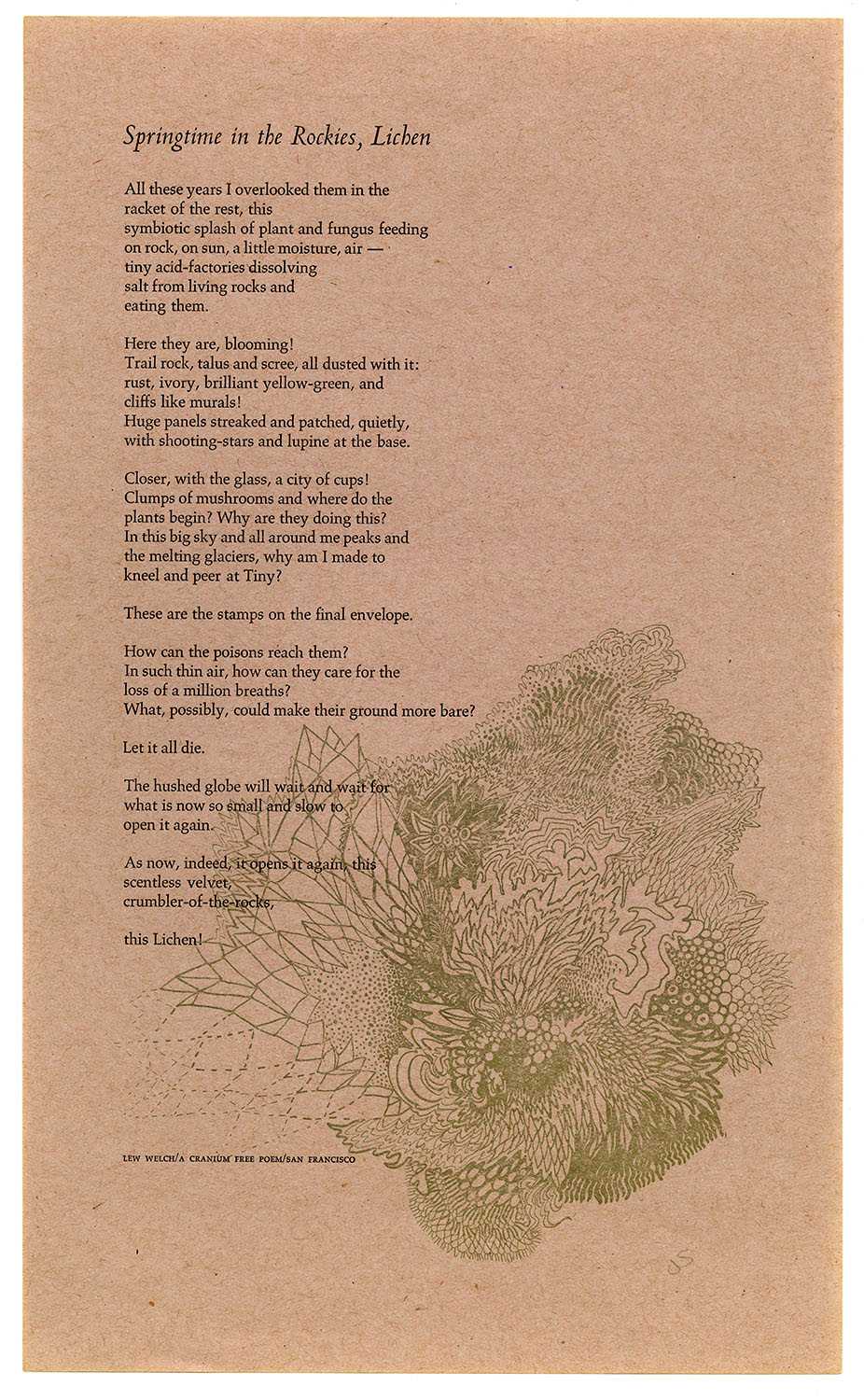 Roommates at Reed College in the late 1940s, Philip Whalen, Lew Welch, and Gary Snyder shared a love of jazz, imagist poetry, and Eastern studies, which they carried with them to San Francisco in the 1950s. They formed the West Coast contingent of the Beats and infused the movement with the sensibility of Zen and environmentalism, expanding the notion of Beat culture from an urban phenomenon to include things like prolonged contact with nature. Snyder and Whalen read alongside Allen Ginsberg at the Six Gallery in 1955, and Welch composed haiku with Jack Kerouac during a cross-country drive. East Coast Beats, Ginsberg and Kerouac, along with Bob Kaufman and Diane di Prima, found spiritual energy in California that changed the shape of the Beat movement.

Gary Snyder was the model for the character Japhy Ryder in Jack Kerouac’s Dharma Bums, which popularized Zen Buddhism for American youth. Snyder, who trained in Japan as a Zen adept, advocated for an anti-materialistic lifestyle in harmony with nature, anticipating many of the values of the 1960s counterculture.