During the early years, the Beat movement was not associated with overt political protest. By nature of their lifestyles and commitment to free speech, however, the Beats confronted and broke with convention and authority. When a culture of dissent arose in the 1960s, focused on opposing the Vietnam War and resisting social and cultural oppression, many Beats were at the forefront. They organized protests and spread countercultural ideas through publications. In 1966, David Antin’s poetry journal some/thing devoted an issue to the Vietnam War, with contributors including Allen Ginsberg, Robert Duncan, Jess, and many others. For the cover, Andy Warhol produced detachable stamps with the ironically stated pro-war slogan “Bomb Hanoi.” Diane di Prima’s War Poems similarly assembled major Beat and Black Mountain poets who opposed the war.

Tuli Kupferberg, co-founder with Ed Sanders of the Fugs, took a satirical approach in the play Fuck Nam and in the list of 1001 Ways to Beat the Draft. The latter offers both practical and outlandish strategies for avoiding conscription, for example: “Wear pants made of Jello”; “Tell the security officer that you are a brother of Allen Ginsberg”; “Become chairman of the Committee to Legalize Marijuana” (Sanders’s position); “Marry the President.” 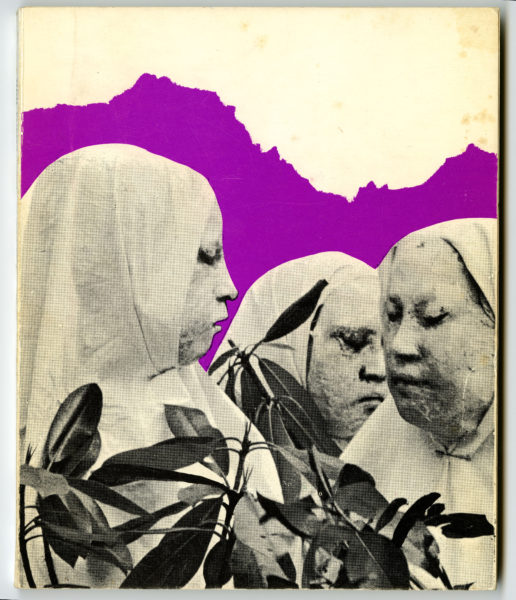 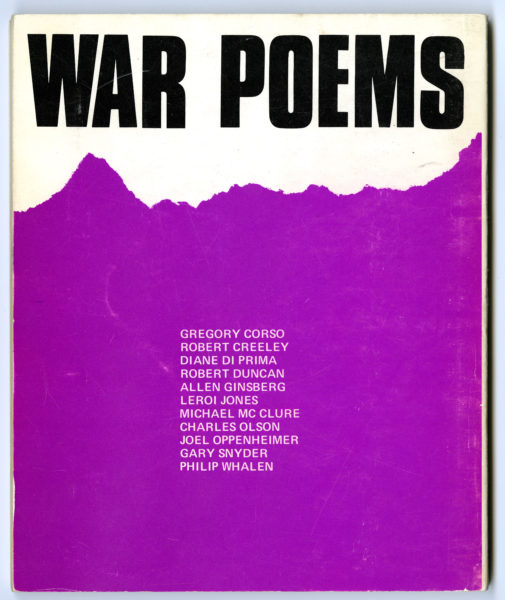 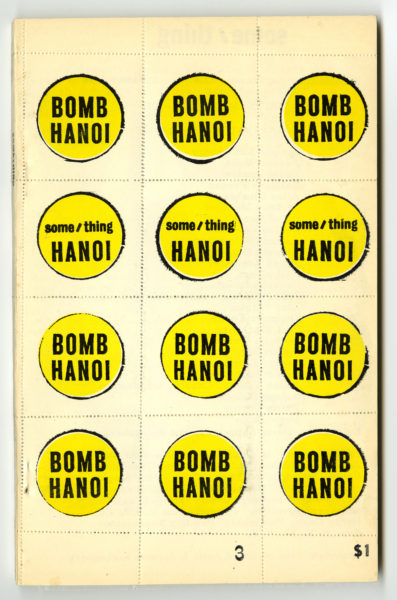 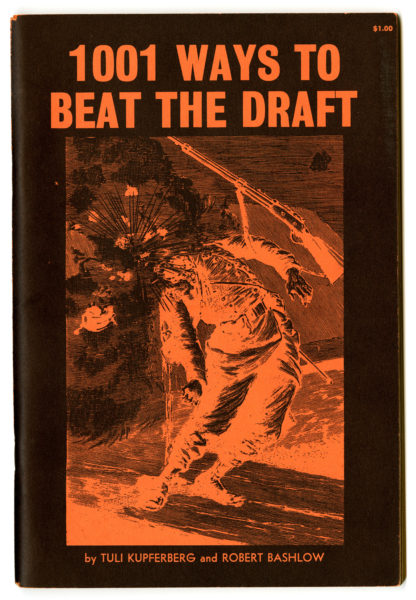 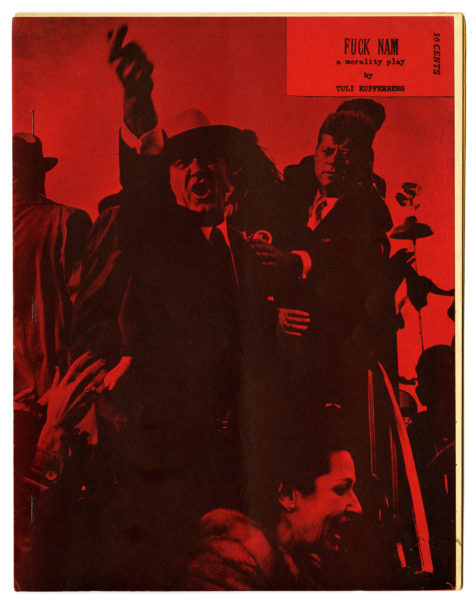 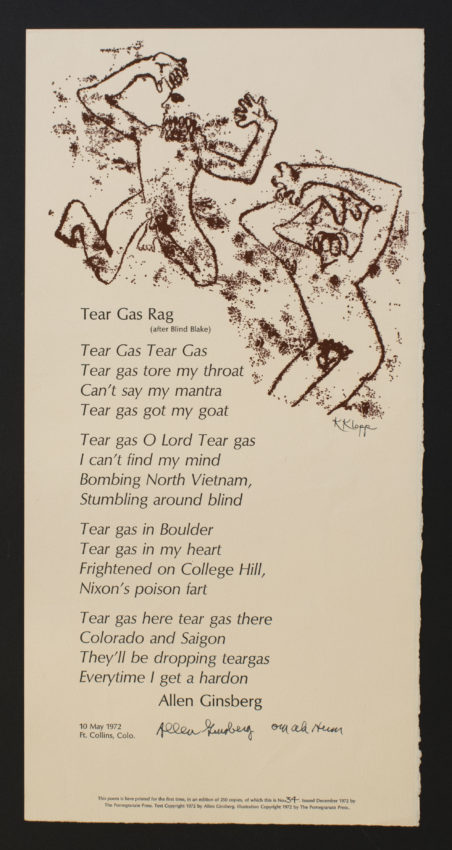 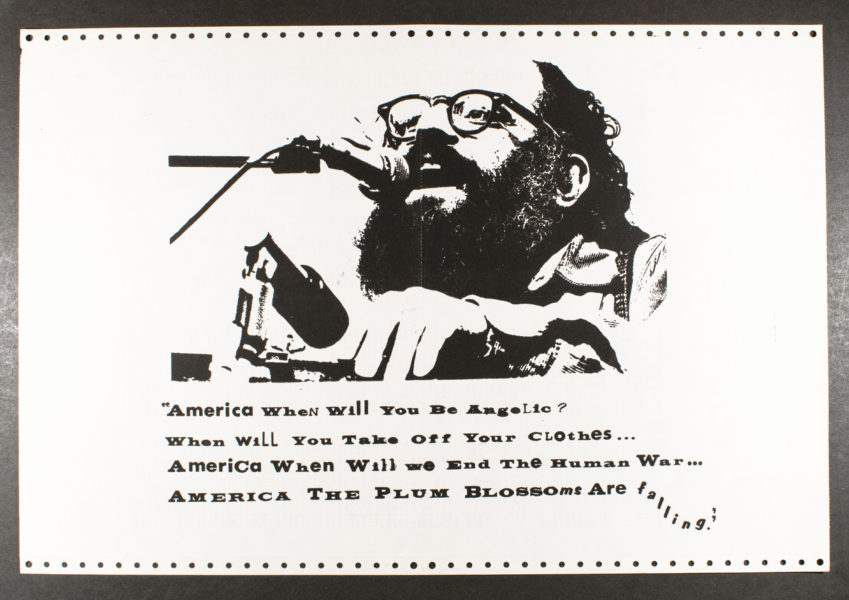 Political Poster Workshop at the University of California, Berkeley
Allen Ginsberg. America, When Will You Be Angelic?
ca. 1970
screen print on computer paper

Produced by a student collective, this poster is screen printed onto the reverse of a sheet of used computer paper—a free and widely available material. The image reproduces a photograph of Ginsberg speaking at a massive anti-war march in San Francisco in April of 1967. The text was taken from Ginsberg’s poem America, an indictment of an unwelcoming, inauthentic society governed by media and militarism, which had appeared in Howl: And Other Poems in 1956. A decade and a half after the poem was written, the poster recombined and repurposed the text to make a pointed statement against the war in Vietnam. 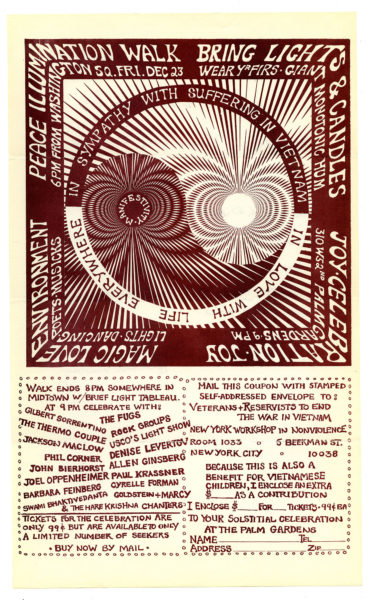 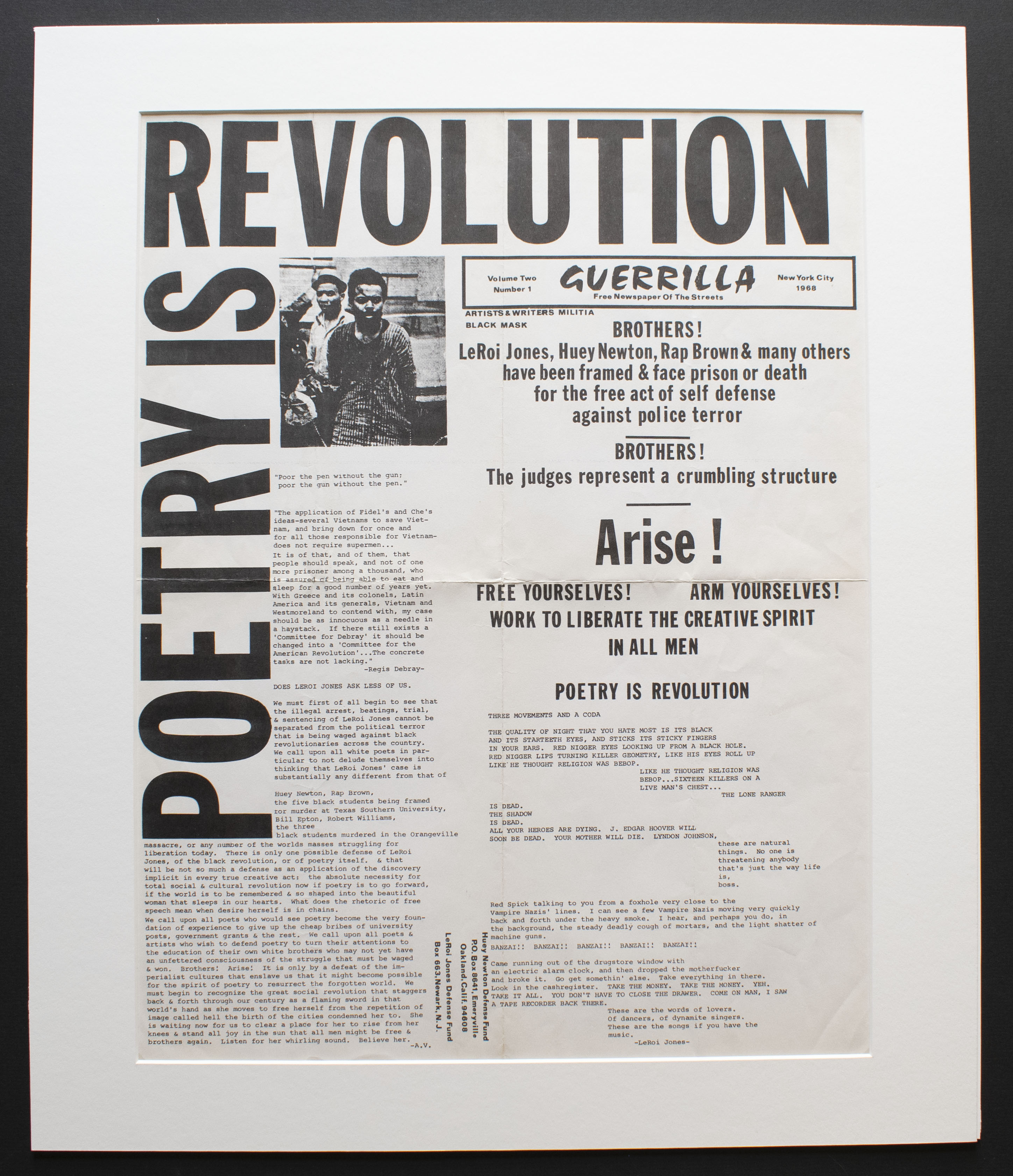 The Detroit newspaper Guerrilla called itself a “broadside of poetry and revolution.” Conceived by poet-activist Allen van Newkirk as a “weapon of cultural warfare,” it was published by the Detroit Artists Workshop and distributed free on the streets. Pictured is the poet Amiri Baraka (born LeRoi Jones) being arrested in the 1967 riots in Newark, New Jersey. He was sentenced to three years for carrying an illegal weapon and resisting arrest, but the sentence was later overturned for lack of evidence. Here his arrest is grouped with the political prosecutions of Black Panther Huey Newton and Black activist H. Rap Brown.

Amiri Baraka was originally part of the Beat movement in New York and was especially close to Allen Ginsberg, as well as to Floating Bear co-editor Diane di Prima, with whom he had a daughter. Deeply affected by the assassination of Malcolm X in 1965, he went on to divorce his white Jewish wife Hettie Jones, change his name, and move to Harlem. There he founded the Black Arts movement, rejecting affiliation with predominantly white culture and affirming the duty of the poet to portray society and its ills. In what was perhaps an indication of uneasy relations between old friends at that time, Allen Ginsberg dedicated his 1968 chapbook of poems, Scrap Leaves, to the “soul of Leroi Jones.”