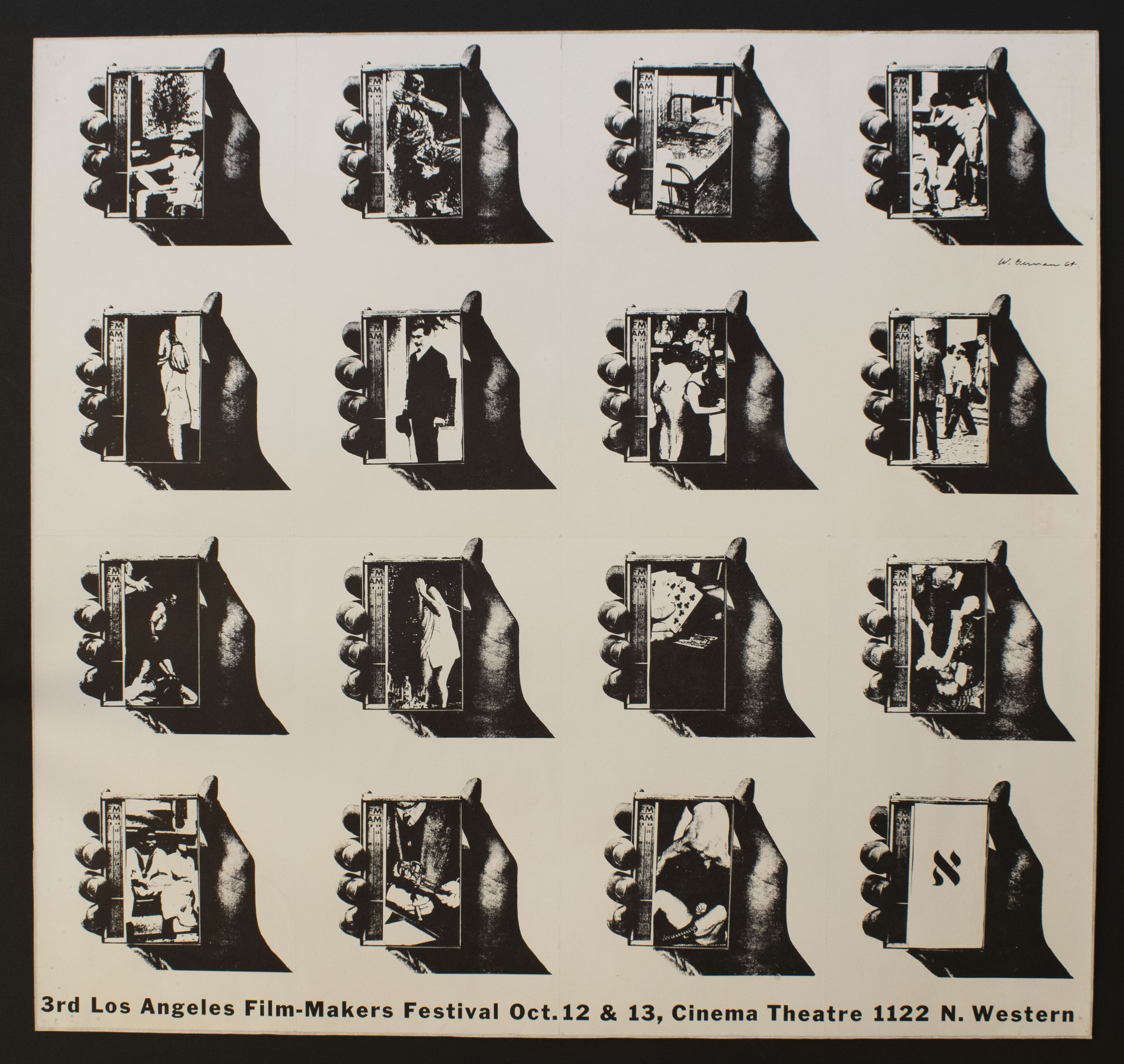 In his signature “Verifax collages,” which form the basis for this lithographic poster, Wallace Berman used a primitive copy machine to print variations of the same image—a handheld transistor radio. On the face of the radio, Berman displayed a seemingly endless array of iconography drawn from popular culture. In these works he turned static two-dimensional art into a sort of film, or television screen, depicting images in rapid succession. Here Berman used the image to promote an experimental film festival. The transistor radio itself connoted pop music as well as ethereal transmission.

Artist Wallace Berman adopted “Art is Love is God” as his slogan. It reflected the religious devotion with which he produced collage, film, sculpture, and his influential and innovative mail-art publication Semina, issued in nine numbers between 1955 and 1964. Characterized by an edgy and sometimes dark sensibility, Semina featured work by dozens of writers and artists with Beat and Surrealist approaches. Berman laboriously printed and assembled Semina by hand, and he gave it to or mailed it to specific individuals. Its name, Latin for “seed,” suggests that the publication was a sort of “seed packet” or “insemination” meant to inspire other poets and artists. No more than 200 copies of each issue were produced, and because they contained loose items, complete original copies are quite rare. Special Collections presently holds six of the nine original issues. 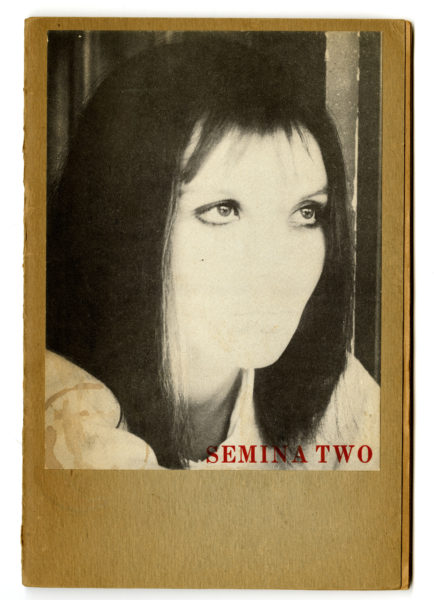 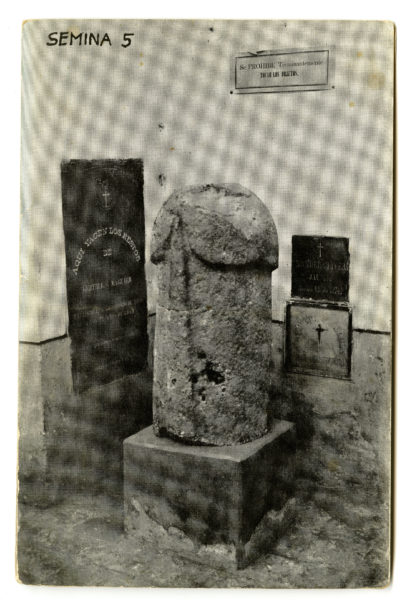 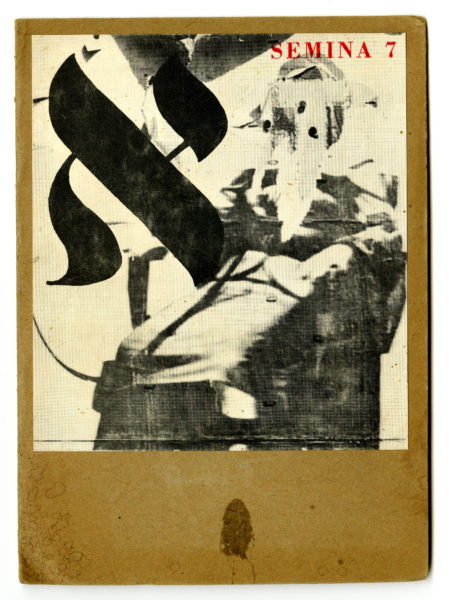 Semina 7, 1961
Wallace Berman subtitled this issue, ALEPH / a gesture involving photographs drawings & text. The Hebrew letter Aleph was Berman’s personal icon and a symbol of the Kabalistic tradition of mysticism. Aleph, said one scholar of the Kabala, was “the silent source of all articulation.” For Berman it became a way to imbue photographs with a higher meaning, and a graphic device that enlivened his images. Dedicated to wife Shirley and son Tosh, Semina 7 includes images of each of them and a self-portrait of Berman. It includes various additional subjects close to his heart, among them jazz (Charlie Parker features in one collage), drugs (a stand of marijuana plants), and sexual display. 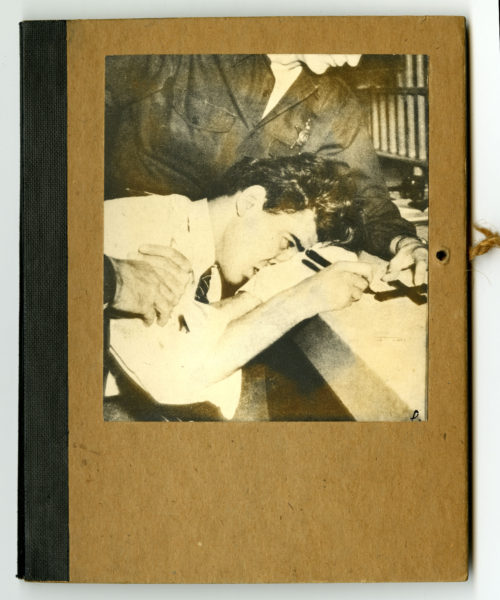 Semina 8, 1963
Cover by Dean Stockwell
The cover image for Semina 8 was produced by Dean Stockwell, a former Hollywood child actor who was part of Berman’s circle. Stockwell later returned to acting, including a turn as Dennis Hopper’s sinister sidekick in Blue Velvet. The cover is based on a news photograph of serial killer William Heirens penning his confession under interrogation. Stockwell altered the image to depict the figure drawing an iron cross of a type used by Berman in his collages. This turned the suspect under duress into a stand-in for the artist Berman himself. 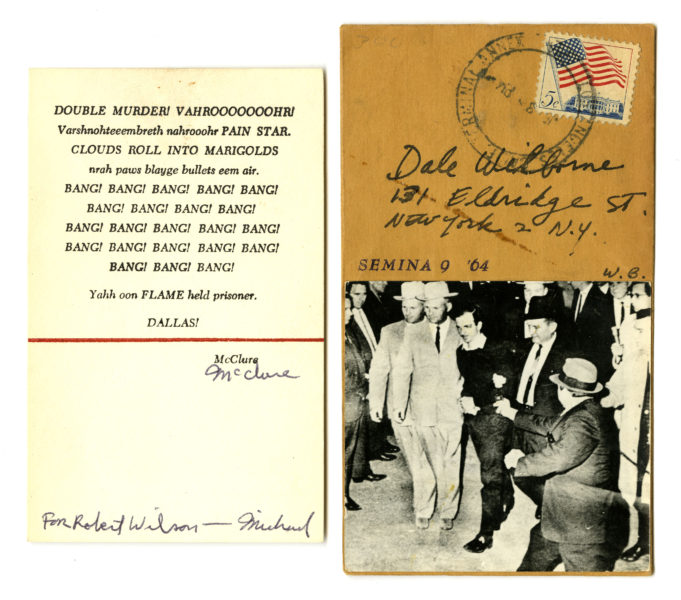 Semina 9, 1964
Robert A. Wilson Collection
For the ninth and final number of Semina, Wallace Berman placed a single image, a photograph of Jack Ruby shooting Lee Harvey Oswald, on the outside of the envelope, where it is purposefully juxtaposed with a canceled stamp showing an American flag waving over the White House. Inside, a small card holds a poem by Michael McClure entitled Double Murder. 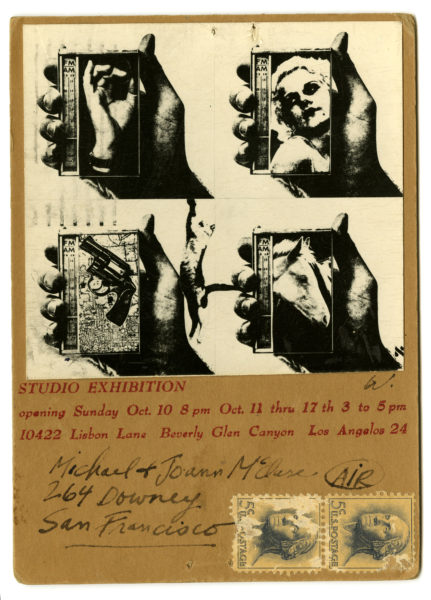 Lengthy inscribed note from Berman to Michael McClure on the verso. This unique invitation addressed to Michael and Joanna McClure features a photograph of four Verifax collage panels. Their iconography is suggestive of Michael McClure’s notorious play The Beard, which debuted a few months later. The play featured an imaginary encounter between two historical/mythical characters: outlaw Billy the Kid and Hollywood actress Jean Harlow. Here, Berman’s grid includes an iconic photograph of Harlow herself, while images of a horse and a revolver perhaps allude to the outlaw Western horseman and gunfighter. Berman and McClure were close friends and collaborators; the note on the back discusses news of their mutual friends, artists George Herms and Bruce Conner. 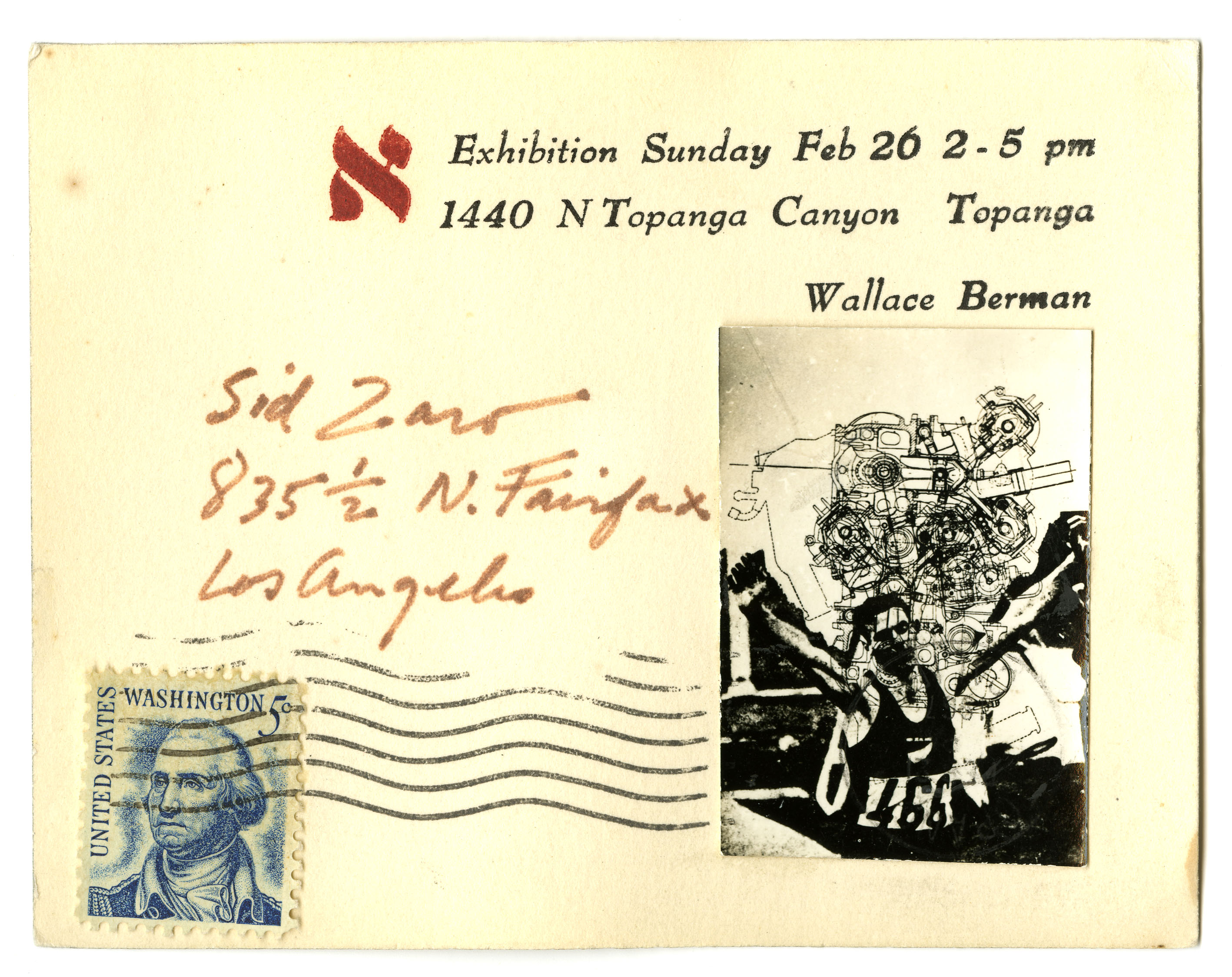 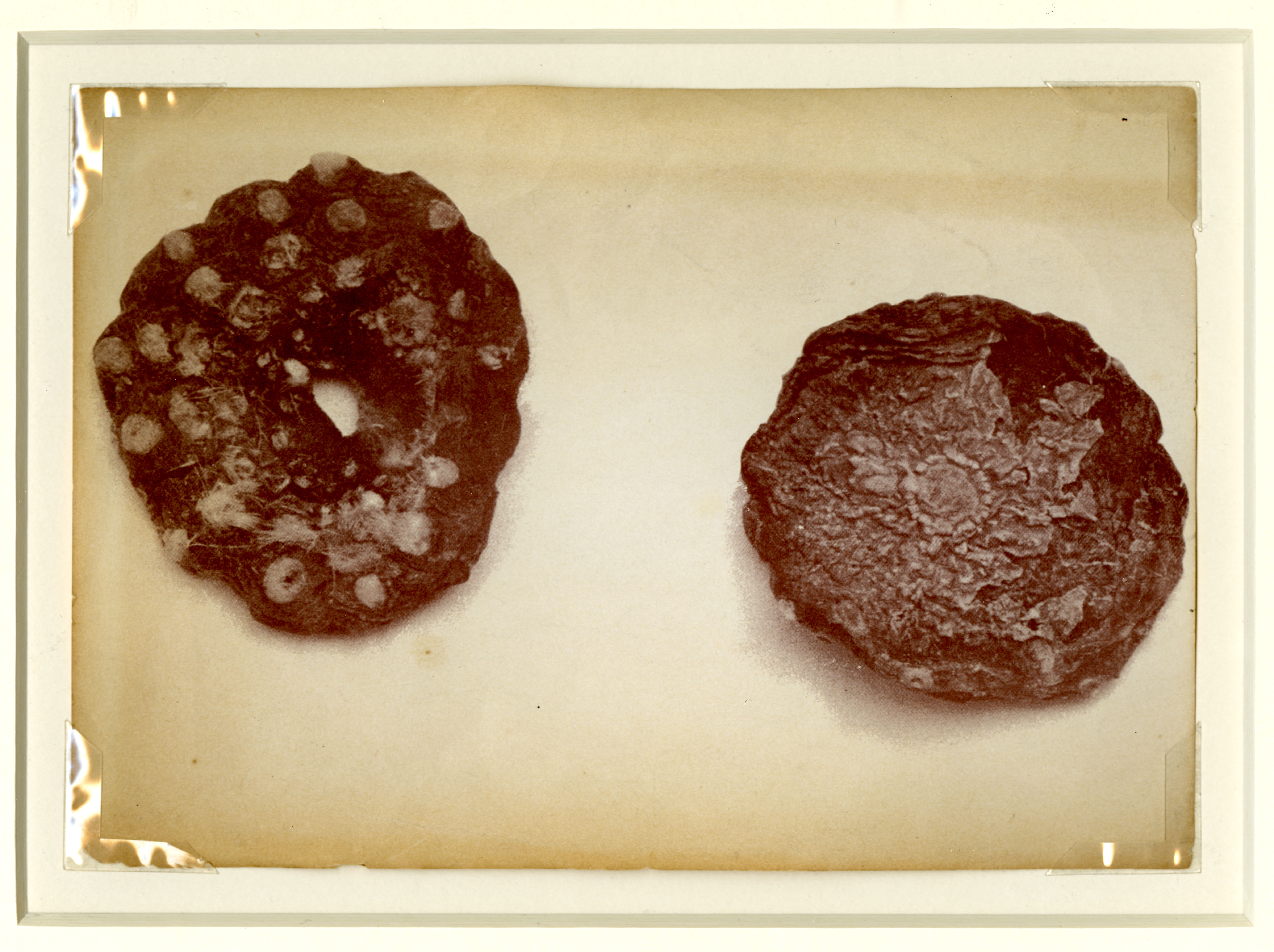 Wallace Berman used this photograph for the cover of number three of his underground journal Semina. The issue was devoted to Michael McClure’s Peyote Poem. The poem was based on McClure’s experience ingesting peyote buttons that Berman had given him. 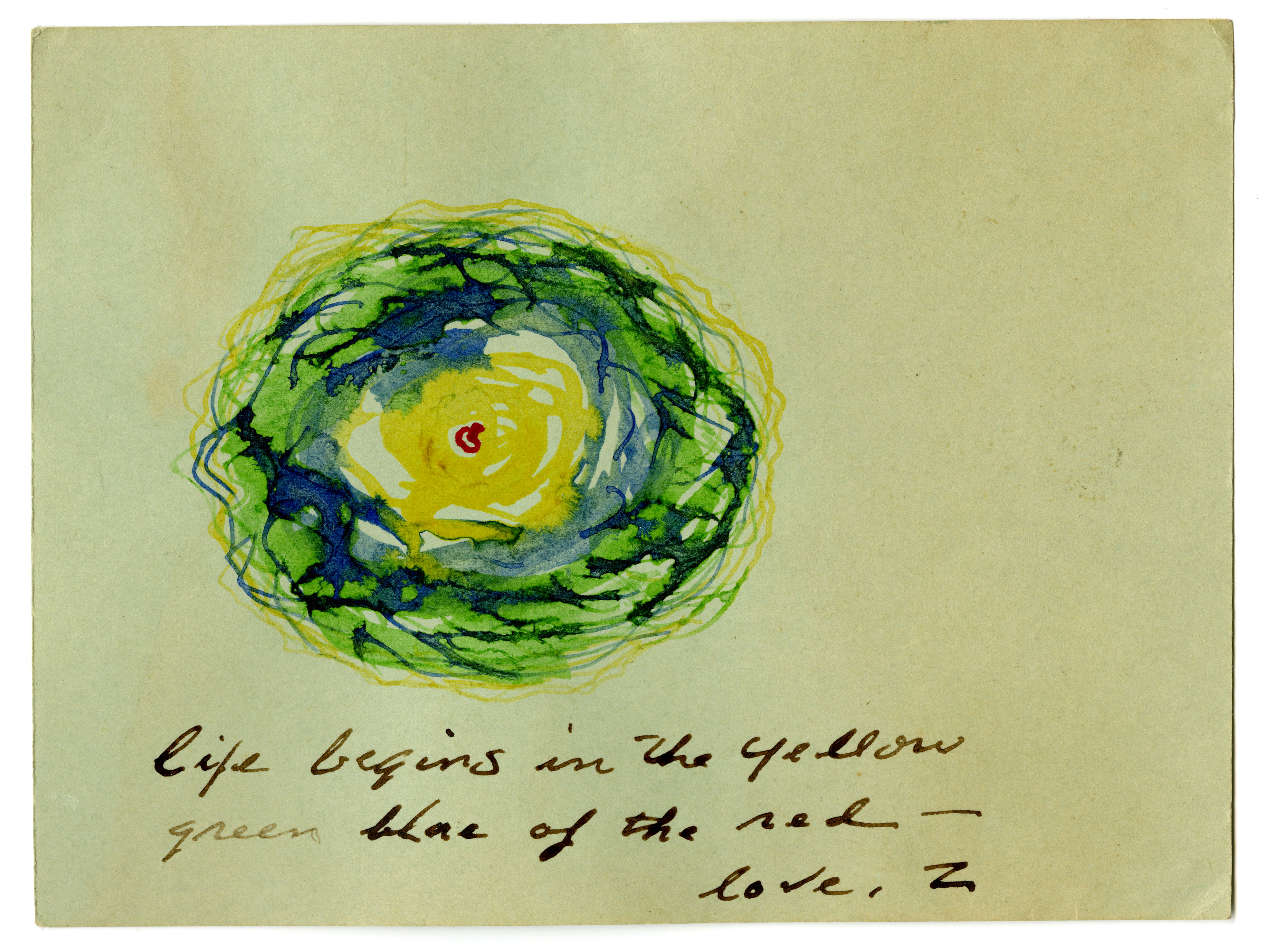 Zack Walsh was a member of Wallace Berman’s circle and a contributor to Semina (examples on view nearby).

Wallace Berman worked on this 8mm film for a decade. It includes hundreds of disparate segments of original and appropriated film. Examples include images of Charlie Parker, the Rolling Stones, and William S. Burroughs’s first book Junkie, as well as Berman’s family and friends. Markings and splotches overlay and obscure the images. The title Aleph—the first letter in the Hebrew alphabet—alludes to the mystical kabalistic tradition, with its themes of creation and destruction. Recurring images refer to drug use, sexuality, and music. Although the film is silent, Berman would play blues records when he screened it in his home.

The physical film produced by Berman had layers of paint and Letraset characters adhering to the celluloid and was cobbled together from hundreds of bits of film stock. After Berman’s death the film was completed and copies printed by noted experimental filmmaker Stan Brakhage, who called it “the only true embodiment of the sixties I know.”