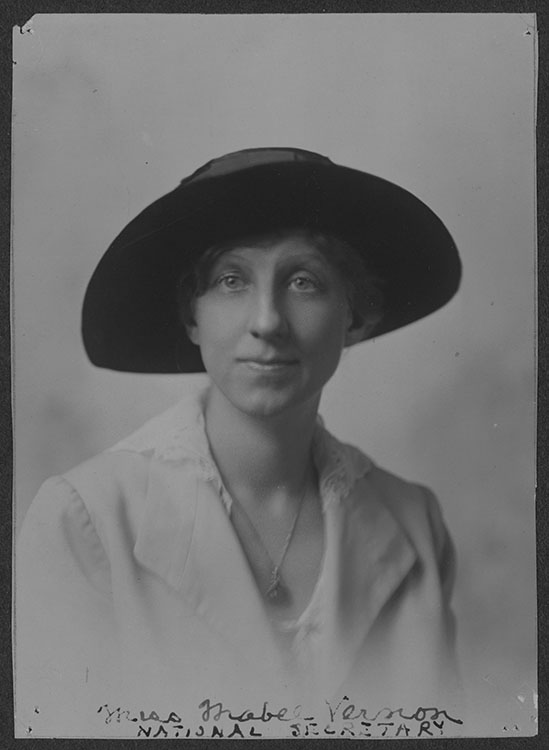 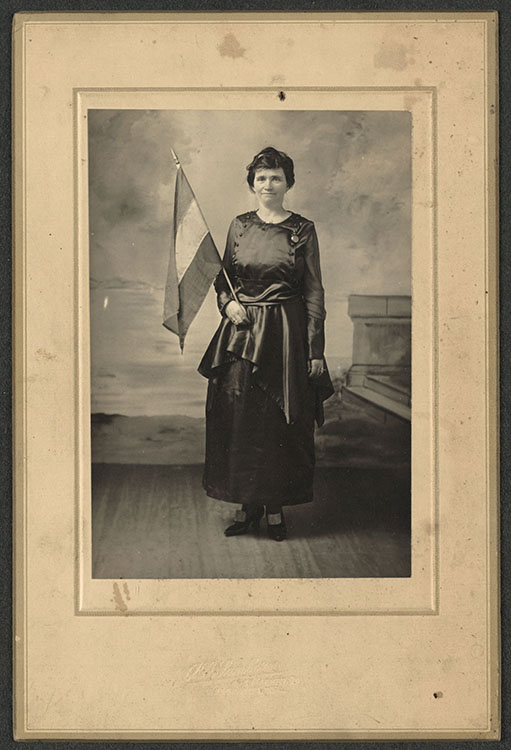 WILMINGTON'S MABEL VERNON (1883-1975) - After graduation from Swarthmore College (where she first met suffrage activist Alice Paul) and a teaching stint in Pennsylvania, Mabel Vernon returned to her hometown in 1913 as a full-time suffrage organizer. During mobilizing tours around Delaware, Vernon regularly gave suffrage talks. The minutes of the Newark New Century Club recorded her appearance in January 1915, which provoked “discussion and many questions.”

Vernon became well-known in Delaware for introducing new suffrage ideas and tactics, such as open-air rallies and speeches. She soon moved on to become a national organizer for the Congressional Union (CU) and the National Woman’s Party (NWP), including a stint in Nevada in 1914. During the effort to win passage of the 19th Amendment, Vernon, as Secretary of the NWP in Washington, D.C., organized creative protests, such as the “Silent Sentinel” pickets the White House. Inspired by Alice Paul’s English-influenced suffrage activism, Vernon led Delaware’s NWP members in those and other attention-getting activities. 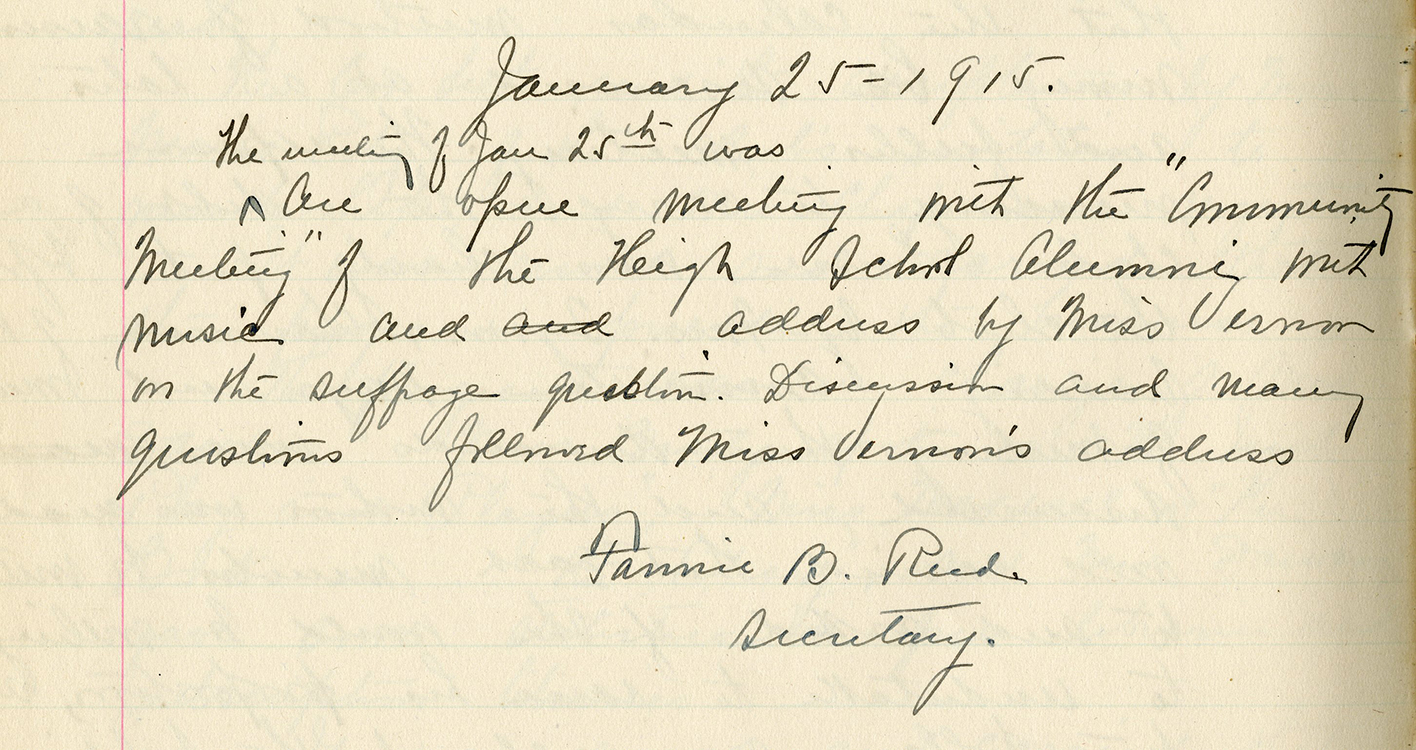 CATHERINE THORNTON BOYLE (1879-1955) - Born into a working-class Irish Catholic immigrant family, Catherine Boyle became a militant suffragist in 1915 and thereafter a lifelong devotee of the National Woman’s Party (NWP). A munitions worker at the Bethlehem Steel plant in New Castle during World War I, Boyle joined other NWP members from Delaware in the January 1919 “Watchfire of Freedom” protests, burning Woodrow Wilson’s words in an urn outside the White House. Arrested, she served five days in jail. In deciding to have this formal studio portrait taken while holding a tri-color suffrage flag, Boyle proudly declared her allegiance to the NWP. 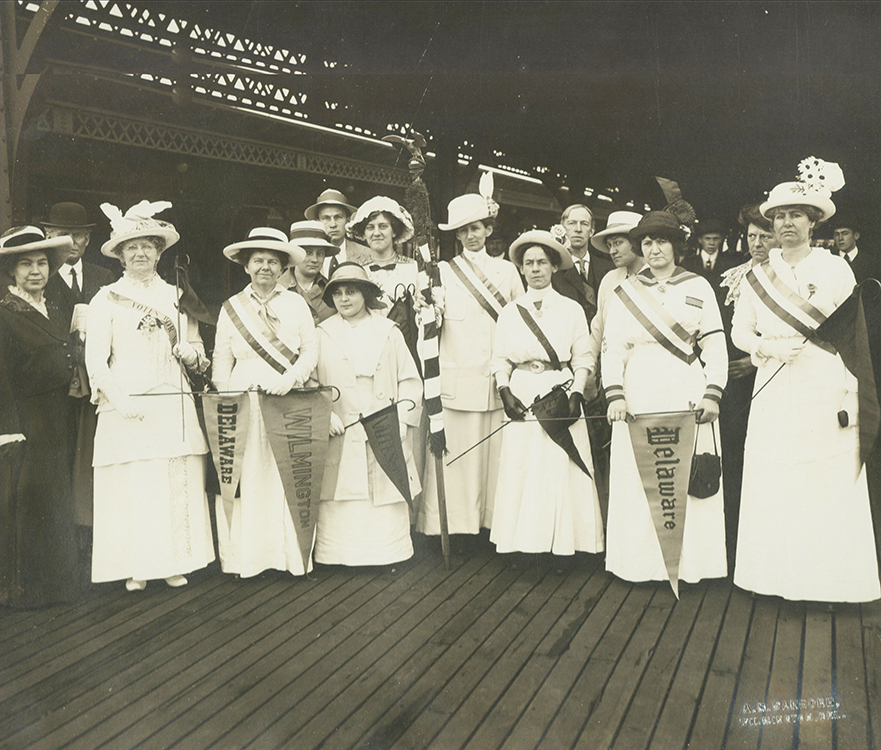 MABEL LLOYD FISHER RIDGELY (1872-1962) - Mabel Ridgely served as president of the Delaware Equal Suffrage Association (DESA) during the campaign to persuade the General Assembly to ratify the 19th Amendment, 1919-1920. With her distinguished family lineage, experience in chairing the highly successful work of the Delaware Women’s Liberty Loan Committee during the Great War, and a residence on Dover’s Green that gave her ready access to buttonholing legislators, Ridgely was well-positioned to lead the ratification effort. She later became the first president of the Delaware League of Women Voters.

The only extant minute-book of the Delaware Equal Suffrage Association (DESA) chronicled the rift in its ranks between the mainstream suffragists and the militants, the activities of members during the Great War, and the organization’s renewed energy and purpose under Eva Halpern Robin’s leadership. As president during the ratification struggle, Mabel Lloyd Ridgely preserved the group’s history by saving the minute-book and donating it to the Delaware Public Archives. 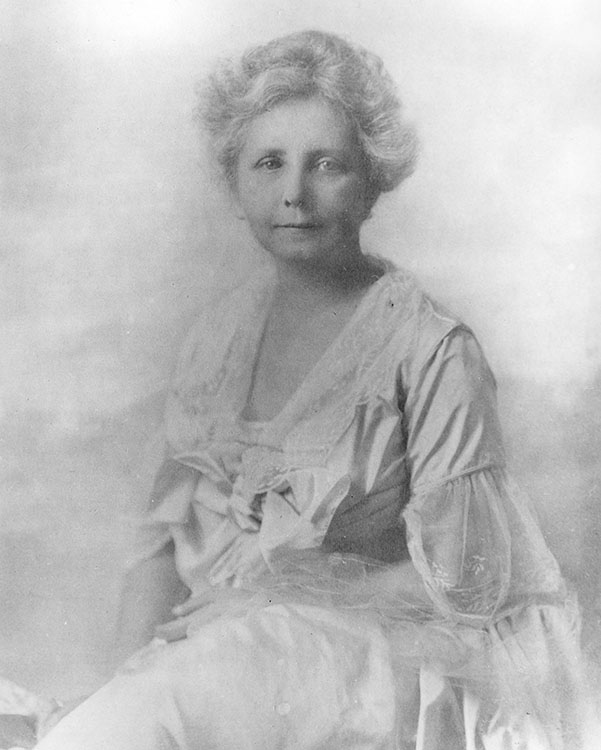 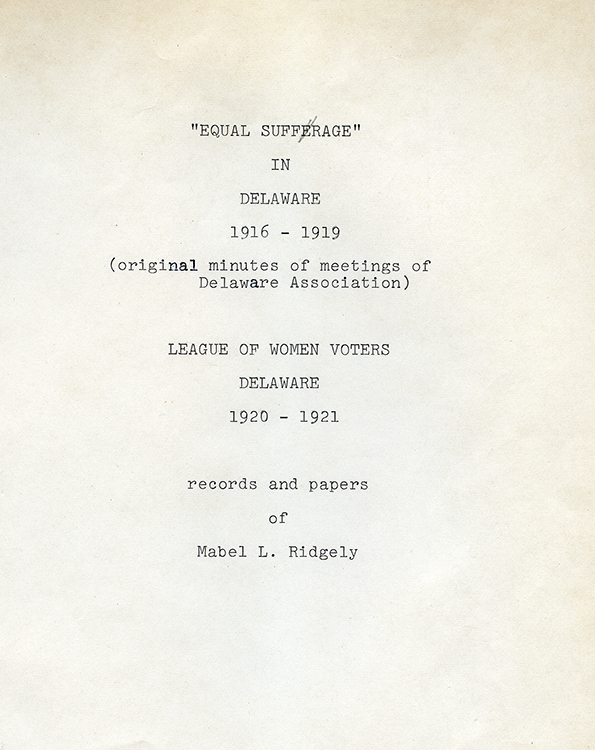 As the Great War came to an end, DESA adopted a forthright resolution indicating its post-war direction, as noted in the October 1918 minutes:

We protest, in the name of the women war workers of the world, and the home makers as well, at the further use of sex as the determining factor in the making of citizens. We place ourselves on record, and we regard our position as unassailable, as enunciating no new truth when we allege that fitness alone should determine our voting population. In the name of the women workers of Delaware, we assert that we desire no longer to be represented by proxy at the ballot box, but we wish to express, unfettered by any assumptions of masculine superiority, our own political convictions at the polls.