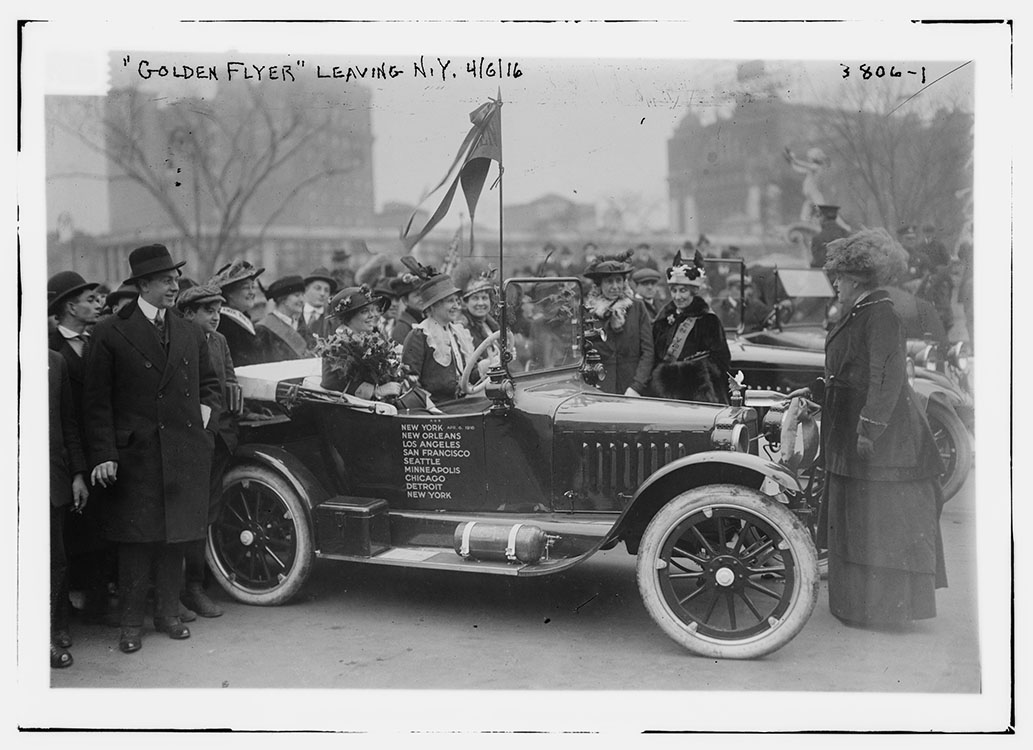 During the presidential election of 1916, the National Woman’s Party sought to harness the power of women’s votes to defeat Woodrow Wilson for re-election. By “holding the party in power responsible” for the lack of progress on a federal suffrage amendment, they targeted all Democratic candidates for Congress, too. The results were disappointing. With the exception of Oregon, the full-suffrage states went for Wilson. 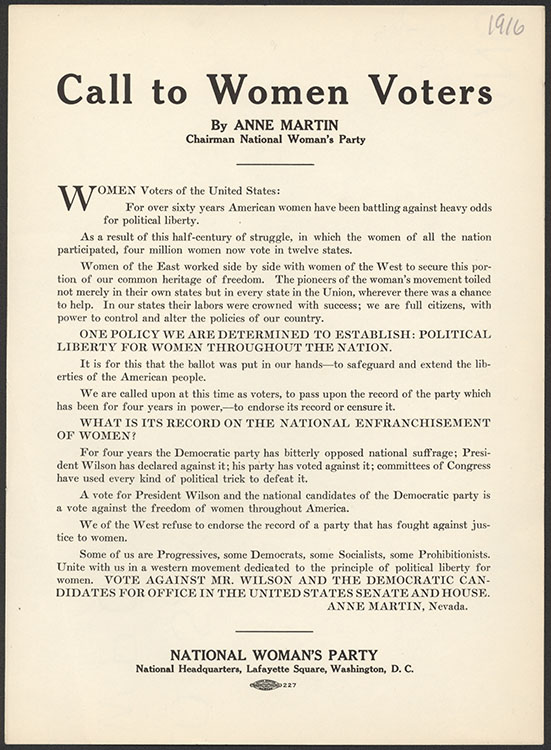 Both national suffrage associations used cross-country automobile tours to call attention to their work. More than simply a conveyance, the motor car served as a symbol of women’s emancipation from conventional restraints and helped associate suffrage with “New Woman” freedoms. In this 1916 photo, Mrs. Alice S. Burke and Miss Nell Richardson are receiving a hearty send-off from the supporters in the National American Woman Suffrage Association (NAWSA) as they set out to drive from New York to San Francisco in their two-seater “Golden Flyer.”

FLORENCE BAYARD HILLES (1865-1954) - Florence Hilles led the state’s militant suffragists, first through the Congressional Union (CU), and then as head of the Delaware branch of the National Woman’s Party (NWP). She toured the state in her Cadillac, giving speeches and organizing support for the cause. At some point, she acquired a purple and gold “CU” tattoo on her right arm. Respectable society women did not get tattoos, but then they did not get arrested for picketing the White House either. 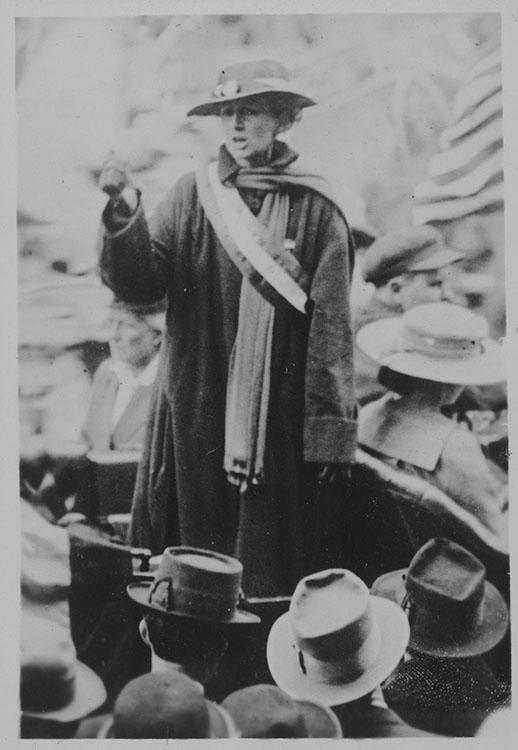 Harris and Ewing, Washington, D.C. Photograph of Florence Bayard Hilles speaking from the back of an open automobile, circa 1916. Records of the National Woman’s Party. Facsimile image courtesy Library of Congress
View Metadata

On Bastille Day, July 14, 1917, Hilles and fifteen other members of the NWP were arrested for blocking traffic outside the White House and charged with unlawful assembly. With the U.S. involved in the First World War, public patience with the picketing had worn thin. Sentenced to a fine of $25 or 60 days in the workhouse, the women refused to pay the fines and served three days imprisonment in the Washington Asylum and Jail before receiving executive clemency from President Wilson. The arrests enabled the NWP to contrast Wilson’s claim that the war would ensure democracy abroad with the spectacle of suffragists being thrown into jail for seeking democracy at home. 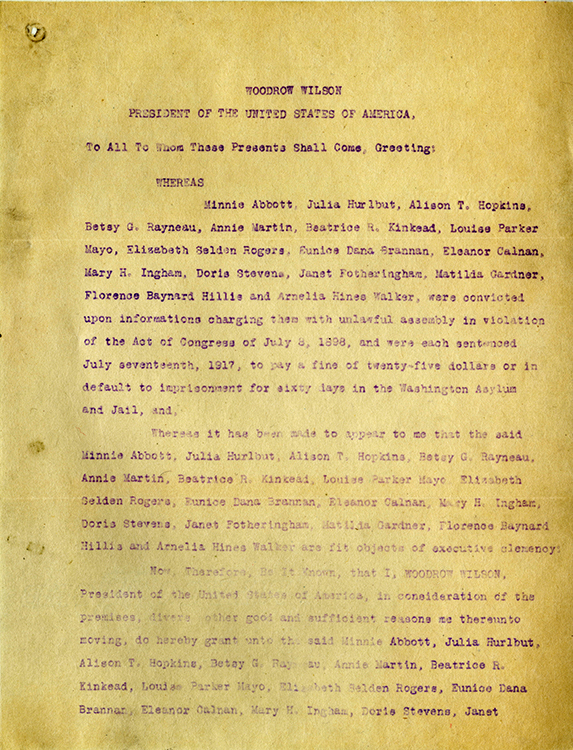 ANNIE MELVIN ARNIEL (circa 1870-1924) - Annie Arniel was the most militant of Delaware’s suffrage militants—and the most tragic. A widowed working-class woman, she was arrested eight times between 1917 and 1919 in National Woman’s Party protests. All told, she served 103 days in Washington, D.C.-area jails and workhouses, including 60 in the infamous Occoquan Workhouse in Virginia. After 1920, she suffered health problems, including a nervous breakdown that required hospitalization. In 1924, she wrote a farewell letter to her daughter Rebecca Arniel and committed suicide. 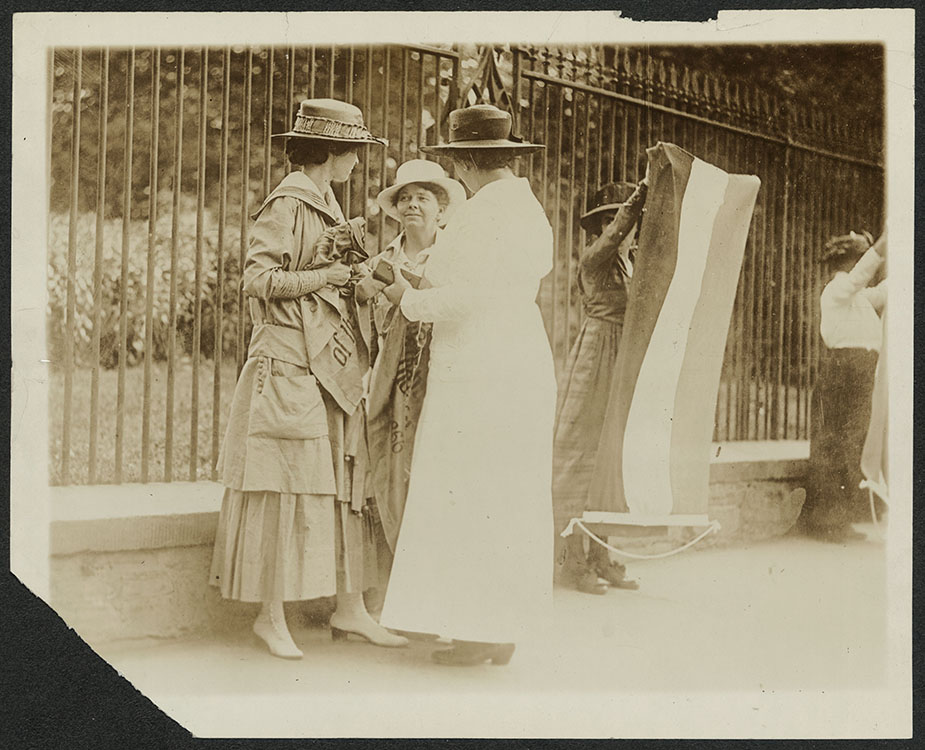 The Delaware Equal Suffrage Association (DESA) and the state’s National Woman’s Party (NWP) branch parted ways over both strategy and tactics. Relations became overtly hostile during wartime when the NWP escalated its picketing of the White House. DESA minutes for July 27, 1917, recorded a tense meeting at the home of NWP supporter Josephine Anderson du Pont, following Florence Bayard Hilles’s arrest and pardon. On behalf of DESA, Mary de Vou “took a very decided stance against the picketing and declined to sign” a letter praising Hilles and “extending sympathy” to her upon being jailed. 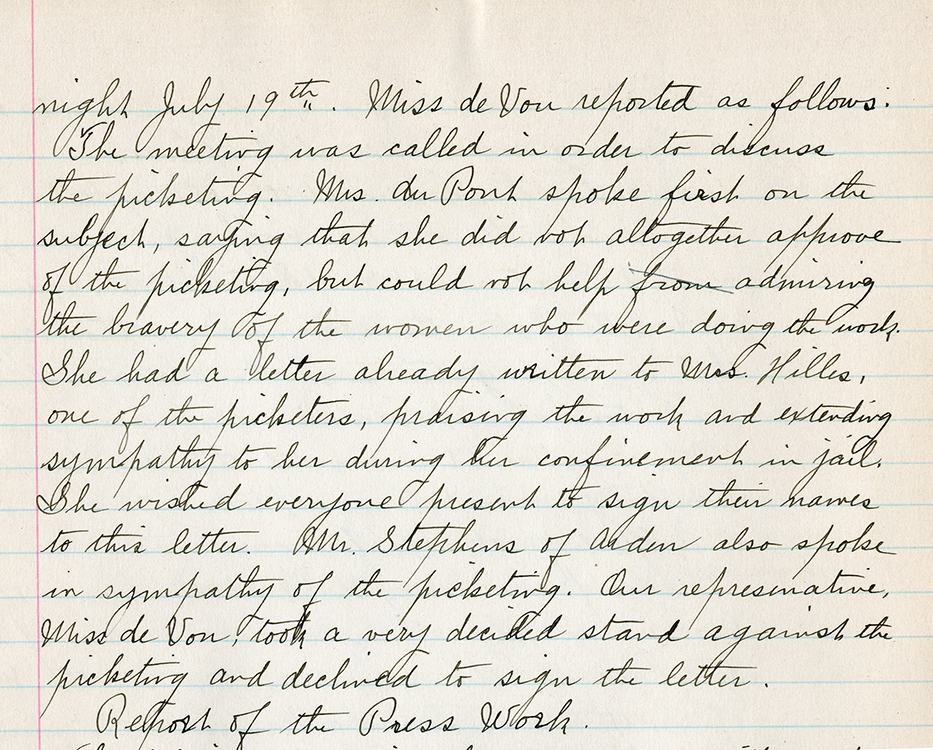