4 – Getting the message out

Color played a role. By 1913, three suffrage colors—purple, gold, and white—had become firmly associated with the U.S. movement. After anti-suffragists adopted the red rose as their symbol, suffragists sported yellow roses or jonquils.

Imagery evoked particular associations. Joan of Arc on horseback represented suffragists as dauntless crusaders. When young, beautiful Inez Milholland, who had led the 1913 Washington, D.C., procession riding a white horse, died suddenly while on a suffrage speaking tour, the National Woman’s Party turned her into a symbol of suffrage martyrdom (see section 4e in this exhibition).

Images of children offered another set of associations entirely: domestic, unthreatening, even infantilizing. Their appeal rested on their ability to render suffrage as a route to better mothering.

Maps told a tale of success and conveyed a sense of inevitability as the number of full-suffrage states spread from West to East and “partial” suffrage gave way to full suffrage. Maps could also be used to make a case for a federal constitutional amendment, as opposed to state-by-state campaigns, by rendering the non-suffrage states as a solid, implacable bloc.

Flags of various kinds, including the U.S. flag, fluttered everywhere in suffrage parades and processions. During the Great War, the U.S. flag’s presence at suffrage events announced attendees’ patriotism. Suffragists also used flags to chart the spread of state-level suffrage and, in 1919-1920, to trace the path to ratification. As each state ratified, members of the National Woman’s Party sewed a new star on a flag specially designated for that purpose. Buttons announced that the demand for suffrage was a pointedly political move. “Votes for Women” or “I am a Citizen” underlined the theme. An image of a woman in white carrying a banner reading, simply, “Forward,” echoed the ubiquitous Joan of Arc image. Some buttons referenced specific state suffrage referenda: October 19, 1915, in New Jersey and November 2, 1915, in Pennsylvania. Delaware’s Alice Dunbar-Nelson travelled in support of both referenda.

BANNERS AND BUTTONS - By 1913, American suffragists had settled on three suffrage colors to identify their cause: purple, gold (or yellow), and white. British suffragettes used purple, green, and white. The use of distinctive suffrage colors gave a uniform “look” to state and national suffrage campaigns and reflected a keen sense of how to market the movement’s demands.

Items from the Woman Suffrage Collection:

State suffrage referenda were common by 1916, when Iowa’s male voters went to the polls to decide whether to revise the state constitution’s list of voter qualifications to include women. This banner urged a “yes” vote. The referendum went down to defeat, as did many—but not all—referenda in other states. By 1916, national suffrage leaders were putting their groups’ energies into winning a federal constitutional amendment rather than continue to wage exhausting state-by-state campaigns. 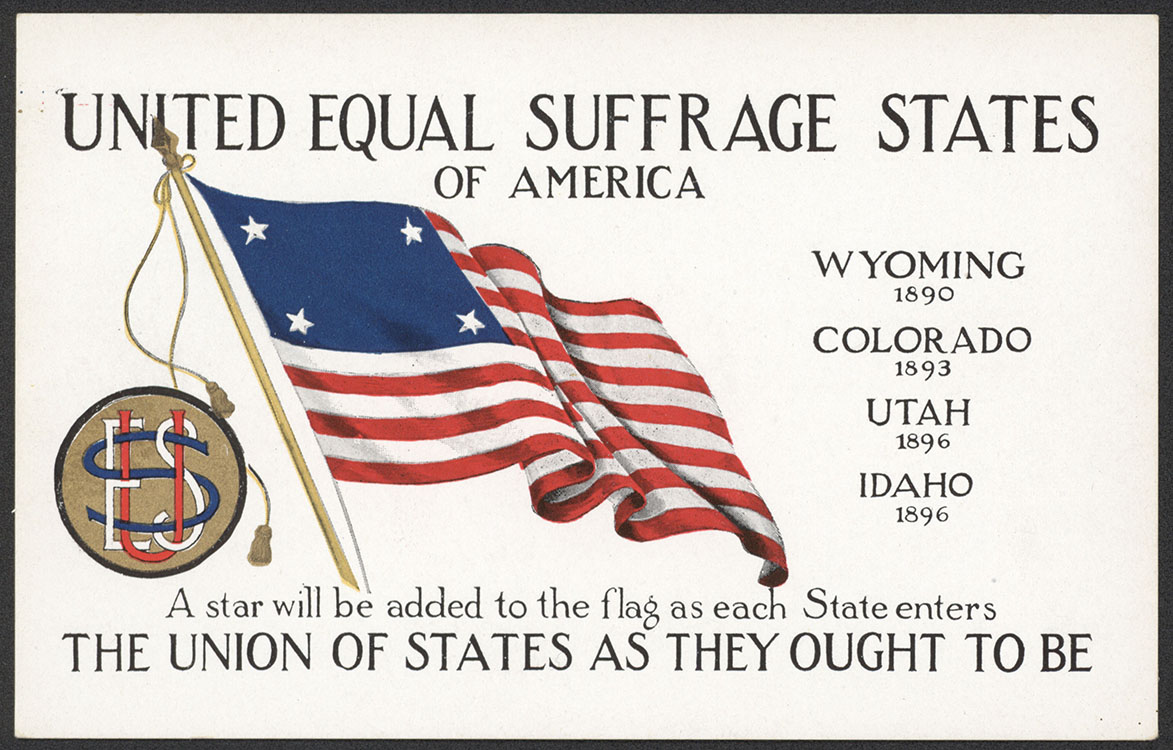 VISUALIZING PROGRESS - A leaflet sporting a map and a flag-themed postcard made a point that the National American Woman Suffrage Association (NAWSA) sought to drive home: that state-level voting rights were on the move and represented a dynamic future. Between the publication of the postcard and the map, seven additional states and one territory had become “equal suffrage states.” The visual imagery—a map, a flag—associated the progress of women’s voting with the nation’s history. The flag with four sparse stars called out for states fill in the gaps by enfranchising their women. 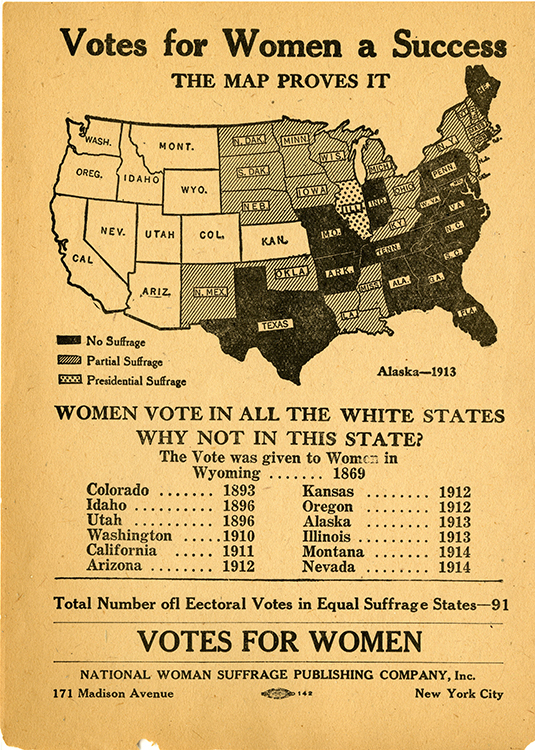