By the time the United States entered the Great War in April 1917, suffrage advocates agreed that a federal constitutional amendment was the best route to winning “Votes for Women.”

They did not agree, however, on whether to support the war. A number were pacifists, members of the Woman’s Peace Party, who believed that arbitration was the way to resolve international conflicts. Nor did suffragists agree on how to campaign for an amendment during wartime.

In Delaware, such disagreements produced bitter divisions. Pacifist-suffragists found their voices drowned out by the drumbeat of war preparation. Members of the Delaware Equal Suffrage Association threw themselves into Liberty Loan fundraising and support for the idea that suffrage might be won “as a war measure.” National Woman’s Party militants suffered arrest and imprisonment for protesting Woodrow Wilson’s unwillingness to endorse the amendment.

In the wartime atmosphere of conformity, censorship, and demands for loyalty, expressions of dissent—of any sort—became suspect.

Delaware Equal Suffrage Association leaders, believing that the militants’ tactics hurt the suffrage cause in Congress, initially refused to sympathize with the arrested Delawareans. But when hunger-striking protestors were subjected to beatings and the horrors of forced feeding, the group condemned “the injustice of [such] unusual and extreme punishment.”

In 1917, as the United States joined the Great War, New York suffragists were conducting a second campaign to pass a referendum enfranchising women. The first, in 1915, had failed. As part of the effort to convince male voters to vote “yes,” the New York State Woman Suffrage Party circulated this leaflet. Aside from suggesting that women were earning voting rights through their wartime service, the piece claimed that woman suffrage was “sweeping” across Europe. The November referendum passed. New York became the first Eastern state in which women won full voting rights. 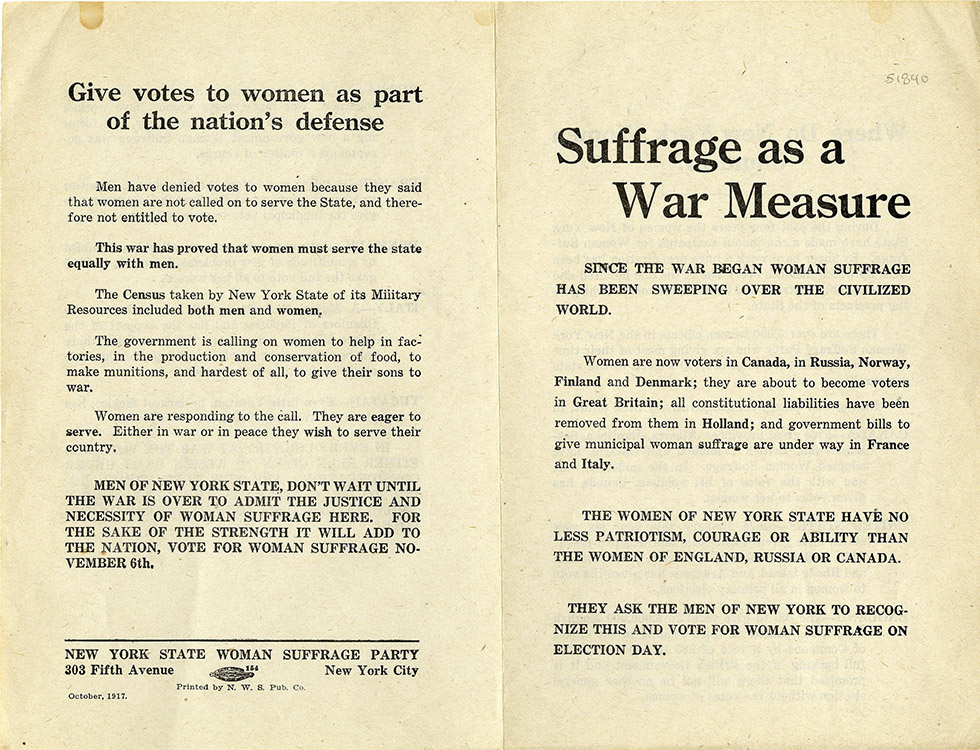